Welcome mat is always out 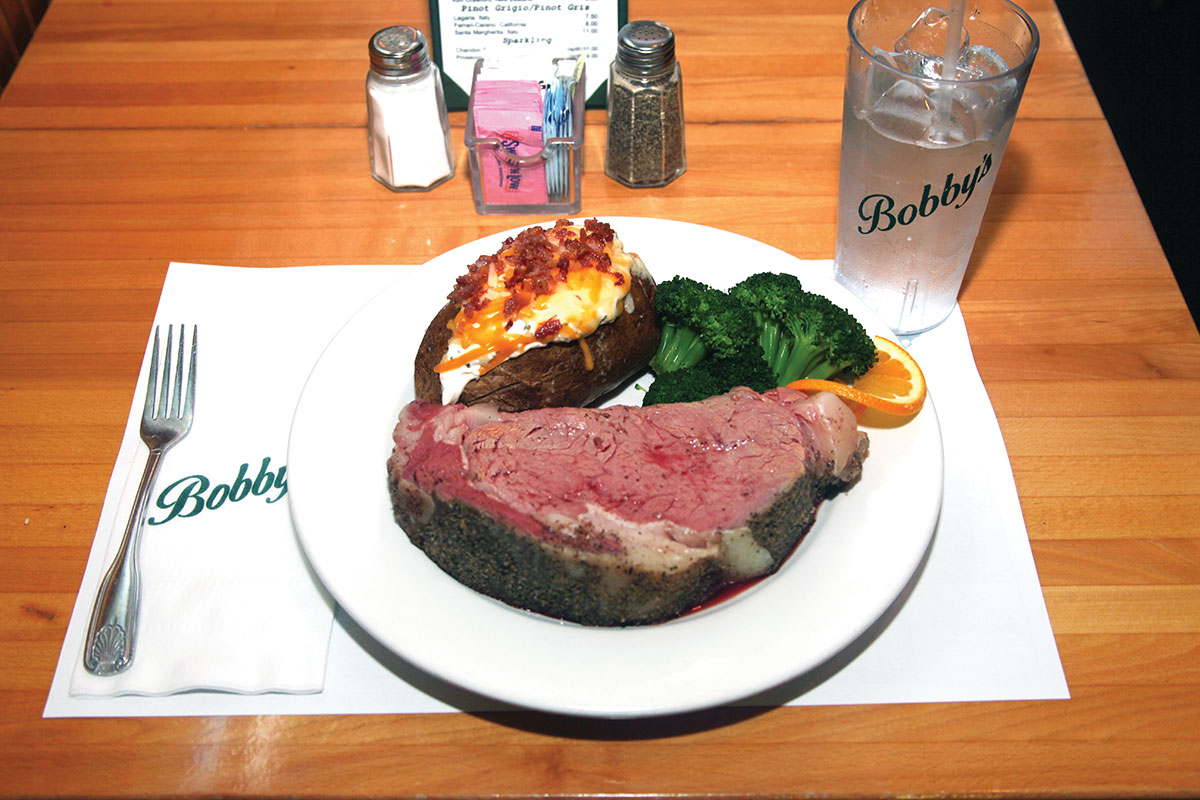 The legendary 16-ounce prime rib is a favorite seven nights a week at Bobby’s on Ocean Drive in Vero Beach. The Certified Angus Beef is slow-cooked for 18 hours prior to a short searing on the grill before it is served. GREG GARDNER PHOTO

For the past 35 years Bobby’s Restaurant and Lounge on Ocean Drive has been serving locals, tourists and sports celebrities with the same food and atmosphere, bringing them back again and again.

The walls of the lounge are adorned with autographed photos as kind of a shrine to sportsmen and women, coaches and umpires who have visited the restaurant. Owner Bobby McCarthy has history with every person on those walls and is happy to tell you the story.

“This (Bobby’s) is Vero Beach and I can’t remember when this wasn’t Vero Beach,” says Craig Fletcher, former city councilman and two-time mayor. “This is our Cheers. When you walk in the door, they know your name. Bobby has the formula. Very few places develop such a good personality. It is an amazing, iconic place. It is a southern gentleman’s lounge, not a bar.”

So as not to play favorites, Bobby’s does not take reservations. On a recent Thursday, people began arriving at the 200-seat restaurant at 4:30 and by opening time at 5 p.m. the inside tables were full of diners, just as McCarthy had earlier predicted.

This is not an early Virginia tavern where George Washington and others would engage in fierce political debate. Political discussion is frowned upon. Vero Beach resident and author Carl Hiaasen stops in for a drink occasionally and people wave from across the bar, leaving him alone. It is a place where celebrities can pull up a stool and have a cocktail without being pestered.

Retired investment banker Ed McLaughlin has been stopping by Bobby’s almost every day since it opened in 1981. “This is a great saloon that draws a nice crowd,” McLaughlin says. “I have been to many saloons in Connecticut and New York and they can’t touch this. I just love Bobby. He takes good care of us. He is a welcoming, generous, gracious host. I’ve been trying to buy a piece of it, but he won’t sell.”

McCarthy, 67, still works a few days a week as maître d’, seating diners including many he knows personally. During an interview at the restaurant, there was a steady stream of patrons who stopped by to say hello and he knows them all. “So long, Lou. So long, Fritz. So long, Jim. So long, Ronnie. So long, Anthony. . .”

After too many cold winters on his native Long Island, N.Y., McCarthy sold his restaurant and moved to Florida. When he opened in 1981, McCarthy was quick to realize he wanted Dodger ballplayers to make Bobby’s their home during spring training. “It worked out great to have 10-12 Dodgers hanging out here every night and it was an instant home run,” McCarthy says. “When they left there was a void.” He says the restaurant has come into its own eight years after the Los Angeles Dodgers bailed out of Vero Beach for Arizona to hold spring training.

Since then, Bobby’s has been a haunt for other users of Dodgertown facilities in Vero Beach. When they trained there, both New Orleans Saints and Miami Hurricanes football players enjoyed the restaurant. Many professional golfers have stopped in over the years for a bite to eat.

Always a baseball fan, McCarthy has been a close friend of New York Mets Manager Terry Collins since 1981 when he coached the Vero Beach Dodgers. He tries to see a few Mets games each season as Collins’ guest. Two years ago, McCarthy sold a minor league ball team he owned for 10 years in Duluth, Minn.

McCarthy’s restaurant team is a testimony to his ability to rally the troops and get the job done with a smile. “I like to keep smart people around me to make my life easier,” he says. Six dinner servers have a combined total of 157 years at Bobby’s.

“We like Bobby and we have a great clientele,” says Julie Archer, a server for 33 years. “People now bring their kids and they keep returning to the scene of the crime. It is very comfortable here. It doesn’t feel like you are coming to work. It feels like you are coming home.”

Marjorie Terry has been the hostess with the big smile for 25 years and loves the customers. “We have watched the people for years, their children, grandchildren and great-grandchildren,” Terry says. “Several generations we have seen over the years.”

Even with great service, people won’t frequent a restaurant if the food isn’t good. McCarthy says the key is simplicity.

“We have good food, good service and we are priced right,” he says. “We are consistent and everything on the menu sells. It is the flexibility of the menu. He can have veal marsala while she can have a cheeseburger or a fish sandwich.”

McCarthy keeps the books and writes checks almost daily to suppliers. “Fast pay makes for good friends. I have had the same cook for 25 years. I can’t afford a chef’s salary or the ego,” he says jokingly.

Chef Ron Adams has been with Bobby’s for 25 years and he knows why the restaurant is so successful. “It is easy to present a good product when you buy a good product,” says Adams. “It is simple. We care about what we do. People ask us, ‘What do you recommend?’ We say, ‘Everything.’ All of our meats are Certified Angus Beef. The fishmongers don’t like my attention to detail. If it comes in the door and it is subpar, it goes right back out the door. Our Danish baby back ribs are the best you can buy.”

What makes the signature baby back ribs taste great is the 20-year-old “mystery” seasoning rub. The ribs from the huge rack almost fall right off the bone with the sauce accenting the meat rather than overpowering it. The delicious house coleslaw is just right, not too tangy and not too sweet.

Bobby’s sells five whole prime rib loins every night, but the process begins the night before. At 11 every night the prime rib is cooked very slowly for the next 18 hours and topped with a delicious au jus. It is impressive to see and taste a two-inch thick cut of prime rib, so tender you can cut it with a fork. Accompanying the dish is a baked potato topped, but not overwhelmed by, the perfect mix of cheese, sour cream and bacon bits.

Perhaps the most famous item on the menu is the half-pound sirloin burger, accompanied by choice of slaw, homemade potato salad, French or sweet potato fries. The bacon cheeseburger arrives open face with bacon strips and slices of fresh onion and tomato. As good as this entrée is, you can easily eat half and take the other half home.

Take the challenge and treat yourself to a Bobby’s Burger, a 10-ounce oversized sirloin burger smothered in sautéed mushrooms, onions and melted cheese.

Save some appetite after dinner if you order the massive Turtle Fudge Ice Cream Pie. It is enough for two or even three people.

Bobby’s offers a wide variety of the best wines from northern California with a few from Europe and Australia. “We go through 100 cases a week,” McCarthy says. “It is amazing how much wine people consume. And wine doesn’t go bad.”

The amount of food people eat at Bobby’s is astounding. Adams says they sell 800 pounds of fish and 800 pounds of meat weekly. “We serve 600 people a day and usually 300 to 400 for the dinner shifts,” he says. “Our business has increased. We do as much business as this building can handle.”

In addition to the inside seating, the shaded outside dining room with ceiling fans is almost within sight of the Atlantic Ocean.

Although he is at the restaurant almost every day, McCarthy is an avid golfer who plays to a 10 handicap. Since he knows all the golf pros in the area from visits to Bobby’s, McCarthy can play any course he wants in Indian River County.

One customer on a Thursday asked his server, “What is going on with this place? It is 4:30 and it is almost full.” The answer to that is Bobby’s serves great food and the secret is out.

While locals have seen the same sports faces on the walls for years, McCarthy says tourists love to walk around and look at all the autographed photos and memorabilia from the celebrities who have been to Bobby’s.

Asked if he has any plans to retire, McCarthy says, “I wouldn’t know what to do with myself. Today I don’t work any harder. I just work more hours.”

On any given afternoon, you might be lucky to see Bobby McCarthy in his restaurant making the rounds, joking with his friends, who also happen to be his customers.