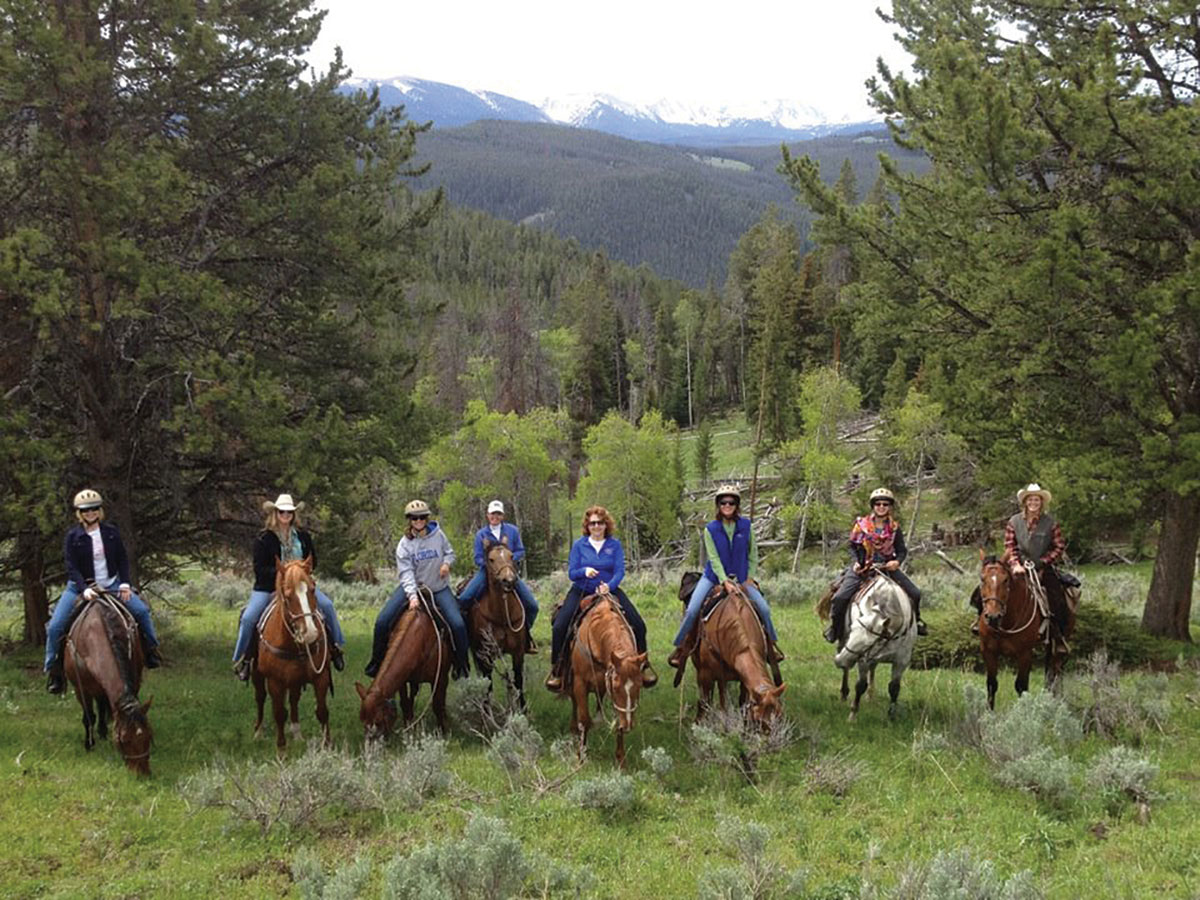 Richie, Kirk, Barb Magee, a founding member who has moved out of state, Tompkins, Bartlett, Chenault, Hoover and a wrangler stop to pose while riding during a group trip to Montana.

Having a good time or doing community service, there’s strength in numbers. For a group of women in Vero Beach dubbed The Giddy Up Gals, the magic number is seven and they’re bringing that strength to the United Way of Indian River County’s 2015-2016 campaign, reaching for a goal of $2,955,000.

Their community involvement has been a bonding element, says Chenault, vice president of wealth advisory services for The Northern Trust Corp. “All of us have long been volunteer-oriented, and Sue, Janie and I are past United Way board members/chairs/campaign co-chairs. Kerry worked for United Way and Katie is on the board now. (The Giddy Up Gals) was a good fit for us as a group.”

The idea of service was handed down to Hoover from the Indian River County pioneer Graves family. Her grandparents, Hubert and Beverly Graves, were active in a variety of organizations and Mrs. Graves is still on the phone committee for the Garden Club of Indian River County. Janie’s mother, Jeane Graves, was a founding board member of The CASTLE, one of United Way’s Funded Partners.

In the past, the United Way of Indian River County campaign has had a chairman and often a co-chairman. Sue Tompkins, vice president and senior financial adviser, Merrill Lynch, was asked to chair this year with her husband Chris, but they agreed that his job as a CPA would take him out of the picture after Jan. 1. Enter the Giddy Up Gals, already a team. “I pitched the idea to the United Way, and they liked it, so I approached my girlfriends. After they got over the initial shock, it was decided that either all of us would commit, or none, and so that is how it became all seven of us. I thought the United Way would be a little afraid of the idea, but they were very enthusiastic to try something different.”

Their careers also give them an understanding of the need for downtime, an idea that took root in 2007 and has grown into treasured group vacations far from the boardroom. It was Bartlett’s mother who got the tumbleweed rolling. After reading in a magazine about a “Giddy Up Gals” weekend at a dude ranch, she suggested that Kerry gather some friends and hit the trail. Bartlett says she always does what her mother tells her to do, so she started with Ritchie, her non-horse-riding best friend. The two women, still best friends, collected six more [the eighth has since left Florida] and the search was on for the first western destination. An ad for a dude ranch in Arizona got their attention and the die was cast. Every trip that followed became an unforgettable adventure.

“[After the Arizona trip] we went to Colorado, Wyoming and Montana,” Hoover says. “Each one has been its own experience. We rode horses in the desert, took an overnight pack trip in the mountains, herded cattle, went white-water rafting, saw Old Faithful and tried to learn to rope.” She notes that several of the group headed in the opposite direction this summer, riding bikes instead of horses on a trip to Paris.

The trip that stands out for Ritchie, executive director of The Robert F. And Eleonora W. McCabe Foundation, is the one to a dude ranch in Loveland, Colo. “… someone suggested we sign up for an overnight pack ride to Cow Camp. What we didn’t realize was that it was a four-hour ride, straight up a mountain, with switchback trails almost the entire way… The temperature was dropping and by the time we got to Cow Camp it was in the low 40s. When we woke up the next morning it was near freezing and rained the whole way back down the treacherous mountain. I have never been so cold in my entire life — all while sitting on the back of a horse. As scared as I was, I wouldn’t trade in the experience and I have my girlfriends to thank for it!”

Chenault also picks that trip as the most memorable. “It SNOWED in the night and we rode back to the ranch in a wet mess, scariest thing I have ever done!” Another that stands out for her is one to Montana, “spectacular because we also managed a trip over to Yellowstone to see Old Faithful erupt. Katie almost missed it because she was in the lodge in line for Starbucks when the geyser started its eruption.’’

Leah Muller’s memory of the group’s beginning was a typical gathering of friends. “The girls are playing country music and talking about ranches, horses and cowboys. Not in that order, of course, so being the city slicker, I was intrigued. Next thing I know, I’m trail riding with these southern girls in the middle of Arizona. I got on a horse, fell head first over the horse, brushed off my jeans, and got back on the horse. Not only did I learn the key to riding a horse is staying in the saddle, but to ride with good friends. These ladies are the most supportive, encouraging, heartfelt cowgirls I know. And by the way, the after party at the campfire was a blast.” This cowgirl is owner of Leah Muller Interiors.

Tompkins says, “I highly recommend having a group of girlfriends that you can always fall back on and that take you away from all the demands of your busy life…it is definitely therapeutic. I feel so lucky to be part of this group of women. We have had so much fun doing something that is completely different than our normal lives. We have stuck together ever since the first trip and joke that we plan to turn Janie’s house into a retirement home someday for the group.”

The women get together for birthdays as well as vacations, Kirk says. One of her favorite memories was her birthday at Hoover’s dad’s house, when they went kayaking to a spoil island. The varying degrees of paddling skill “provided a lot of laughs and tipping kayaks. We spread out blankets and had some drinks and snacks while we chatted away about everything under the Florida sun. Lots of smiles.”

The women, who have had a new name, Sensational Seven, bestowed on them recently, are ready to ride off into the sunset when the 2015-2016 United Way campaign wraps up. Their sights are set on a return to the Big Sky Country of Montana.