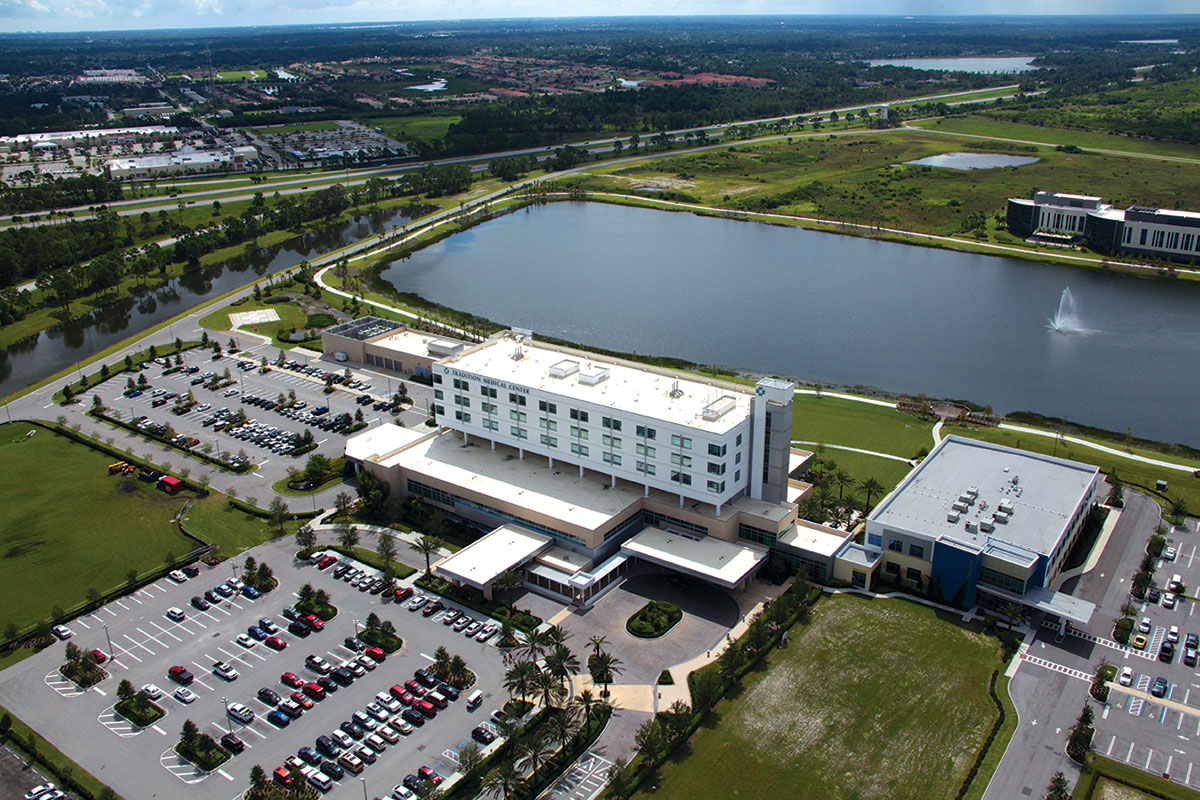 Looking north just before the hospital opened in 2013.

It took 12 years to win approval for Tradition Medical Center, but less than two years since its opening it is to be expanded in a $100 million project that will double capacity from 90 to 180 patient rooms.

After the western Port St. Lucie hospital exceeded its projections the first year, Martin Health System decided to expand by 170,000 square feet, going up three stories to top out at nine floors. During 2014, Tradition handled 5,200 admissions, 22,000 emergency room visits, 1,100 surgeries and 1,470 births. Since the hospital opened, its officials say the acute care facilities have been at full capacity two to three days a week.

“Fortunately, our leadership and design team had the foresight to build flexibility into the hospital’s initial phase and develop a six-floor hospital that could be easily expanded to meet future demand,” says Mark Robitaille, president and chief executive officer of Martin Health System.

Patients will also benefit from the addition of an 18-bed observation unit designed to improve the flow of the emergency room for people who aren’t quite ready to go home. Also to be completed by 2018 is a catheterization lab for cardiac care, interventional radiology and vascular procedures. And space will be added to the maternity, neonatal intensive care and emergency departments.

With a mechanical mezzanine on the third floor, construction going up can be completed without disruption to patients and staff. The observation unit for the ER will be added to the ground floor at the east end of the building. Using the building’s “flexible and expandable design,” plans are set for future expansion to the east for a total of 300 beds as Port St. Lucie is projected to grow by 79 percent by 2030.

This expansion is expected to create 550 new jobs and 400-500 jobs for the construction project. “Tradition Medical Center has also had a significant economic impact on the region,” says Robitaille. “The influx of employees, physicians and visitors to the area has been welcomed by the restaurant and housing industries. The enormously positive response from the community in support of this hospital has been gratifying.”

“We had to go through a difficult process to get the certificate of need and it is expensive to build a hospital,” says Scott Samples, Martin Health spokesman. “In two years we have demonstrated the need and we are proud to be providing health care and taking care of people close to home. It has been a success. We looked at the numbers and it made sense to grow. We hope to hire people from Okeechobee, Martin, Indian River and St. Lucie counties.”

“We’re very happy the first phase went exceedingly well and in less than two years they are going to double in size,” says Peter Tesch, president of the Economic Development Council of St. Lucie County. “Tradition Medical Center has had a big impact on our economy and employment rate. Health care has been a specific driver in job creation. The capital investment is certainly a shot in the arm for our community and the average salaries pay above the average for workers in St. Lucie County. That payroll will reverberate into the county multiple times. This project will spark other business and job creation opportunities from other labs, ancillary businesses, service or retail, medical and non-medical related.”

“Tradition Medical proved to be such a welcomed resource,” says Terrissa Aronson, St. Lucie County Chamber of Commerce, president/CEO. “They were running at capacity within a year. Their planned expansion is exciting news. It means more services and more jobs for our residents. With this second phase of their expansion in the plans since inception, we are sure it will be a seamless process.”