A waterfront home lies on a broad expanse of the Indian River just south of old Fort Pierce, the original military supply post for which the town is named.

South Indian River Drive offers some of St. Lucie County’s most picturesque waterfront scenery, as well as historical residences, nearly all of them along the west side of the drive. It was created in a time when long distance passenger trains helped stoke the expansion of Florida and railway travel still brought visitors from Chicago, Cincinnati and the Northeast to this beautiful part of Fort Pierce.

But on a unique spit of land, created in the 1950s, a cluster of only six homes occupies the east side of the drive, providing a coveted, private, direct riverfront enclave.

Sarah Cieslinski and JJ Follano saw a home on that east side of the drive in 2020 and fell in love.

But at that moment, buying a house was not in their plans, particularly a house in need of a total renovation.

They had just sold their home on C-24 Canal in Port St. Lucie and had longed to someday live on a property with a bigger water view. But they were focused on a completely different kind of next step. They were preparing to outfit a van, live in it and travel around the country. Then a trip to Zillow.com brought them instead to a vision of a house and a future project that would take up the next two years of their lives.

The nearly 3,700-square-foot home had deeply appealing elements, but would require a top-to- bottom rebuild in order to complete the vision the couple shared. For years the home had been used as an Airbnb, something that Cieslinski claims, “the neighbors weren’t too happy about.”

The six homes cradled on the east of the drive are all gifted with magnificent water views that stretch to three points of the compass. It’s a miles-wide part of the Indian River with the Vitolo Family Nature Preserve across the lagoon, so greenery instead of high rises makes up the majority of the scenery across the water.

The piece of land came directly out of the water, dredged from the river bottom in the 1950s, leaving a deep channel in front of the spit.

Cieslinski and Follano’s riverfront lot is over 1.25 acres and seemed an ideal vacation property for those Airbnbers. But the couple saw deeper into the soul of the place. The condition of the home masked its unrealized potential and its allure ultimately put the couple’s travel plans on hold. They bought the home and dug in on a major renovation project.

It began in October 2020 and ended the last week of July. A meticulous, extensive and detail-oriented DIY mission has yielded impressive results.

An entire fresh core for the house was the first step. New plumbing, wiring, air conditioning ducts, roof and floors, windows and doors. The house wasn’t just updated, it was transformed, and maintains an emphasis on sustainability, which goes along with their e-commerce business.

In 2018, they launched Zero Waste Shop, a website dedicated to reusable and sustainable items, with a goal of helping to eliminate single-use plastics. A dedicated environmentalist, Cieslinski had been looking for a way to make an impact on reducing waste and helping protect the environment. With Follano’s tech background, and her idea of sustainable goods, they built a website and sent it out into the world. It has succeeded beyond their dreams. Particularly during the pandemic lockdown, with on-line shopping and the appeal of reusable products because of shortages, they went from zero profits to $1 million in one year.

This played well into the renovation project. Sourcing reused and previously owned furnishings became a principal strategy. Furniture in the elegant dining room has a formal feel and was a dual endeavor by Cieslinski and her mother, Suzanne. Cieslinski found the chairs on Facebook Marketplace, and Suzanne purchased the solid wood table in Port St. Lucie from the same source, and refinished it. Cieslinski chose a hammered copper pendant lamp to crown the room and give it a decorator’s sophistication.

An addition was put on the home in 1980, which Cieslinski refers to as the fireplace room.

“This is our favorite space,” she says.

On a cool winter’s evening, the owners can open the doors, catch a breeze off the river and stay warm with a blazing fire. The anchoring, standout component is a stunning black and white fireplace wall and facade. No actual fireplace front piece exists there, just a tiled facing that offsets a black, shiplap back wall that Follano built. It carries the black and white theme through to the decorative tile used at the base.

Luxury waterproof vinyl flooring, in driftwood color, is in place throughout the home.

“We wanted something pretty indestructible because we have the dogs,” Cieslinski explains. You can’t scratch it, but it can get wet, you can mop it, nothing can damage it.”

This makes both Jax, a golden retriever, and Kane, a border collie/retriever mix, the most carefree dogs on the river.

The kitchen and living room design required removing walls and installing sliders to achieve a more open floor plan and to maximize the wide river views. Follano devised a plan to remove a load bearing wall by using alternative posts and beam at the front of the kitchen, which opened up the entire space. Where previously the room lacked any access out to the deck and yard, there are dual sliders to bring the outside in.

The Chef brand kitchen appliances were ordered on Black Friday 2020 and took six months to arrive. The character of the room is synergy and balance but achieved through the edict of opposites attract. Matte white finish on all the appliances is an orderly contrast to the shiny, white porcelain tiles in a subway design for the backsplash.

Geraldo Dias of Gala Tile & Marble in Port St. Lucie did all the tile work in the house.

“The house was in very bad shape when we first saw it,” Dias says. “A lot of things needed to be fixed.”

The kitchen’s contrasting black cabinets on one side and white cabinets on the other blend with gold faucets and handles on the drawers and doors and even on the appliances. The result is a contemporary, regal look harmonizing with the soft white oak floating shelves that harken back to the color of the beam and posts.

Standing sentry at the left of the entryway is a grand, fiddleleaf fig tree.

“I had to have a big live tree right when you walk in the house,” Cieslinski says.

The tree is encircled by a gently curving staircase leading to a second-floor landing with an overlook that provides the entry to the anteroom for the master bedroom.

The upstairs area was complete enough by March 2021 that the couple was able to move in while still working on the rest of the renovation. A small kitchen, with white and tan wicker cabinets, a microwave, hot plate and a mid-sized fridge made accommodations functional and magical. Out of the sliders is a spacious balcony that juts out over the greenery below and gives the illusion of floating all the way to the Indian River. It’s an extraordinary place for a morning’s coffee or a cup of wine in the evening.

The adjacent bedroom is a massive room with a vaulted ceiling and a water view from every vantage point.

In the master bathroom they reclaimed a compartmentalized space previously accessed through three separate doors in the master.

“One door went to the vanity, toilet and shower,” Cieslinski says. “Another to the closet. And another accessed a small office, storage room.”

Outside, Cieslinski has created a garden that stays true to the sustainable qualities of their business and lifestyle. She’s planted clusia, which when fully grown, will wall-in the area and protect the plants from the wind off the river.

Cieslinski has grown colorful flowers as well as edibles, from tomatoes to peppers to strawberries. And the flowers, all Florida natives, attract and sustain a bee population.

“I love gardening for pollinators, and I wanted it to be kind of a magical experience when you walk in,” she says.

She has also incorporated a butterfly garden area with milkweed for nurturing endangered monarchs.

The house is for sale for $2,595,000, listed with Atlantic Shores Realty. The couple’s nearly two-year renovation project was a midway stop on a long-range plan. They will be married in the near future.

“… the project has been a lot of work,” Cieslinski says. “It’s big. And we’re selling now because we really want to travel before we have a family." 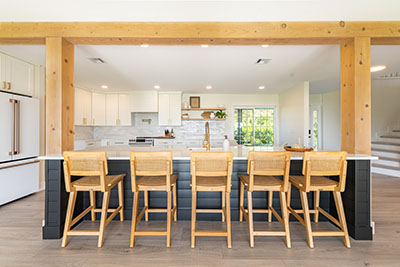 When load-bearing walls came down, a post-and-beam configuration opened the kitchen and expanded the space. 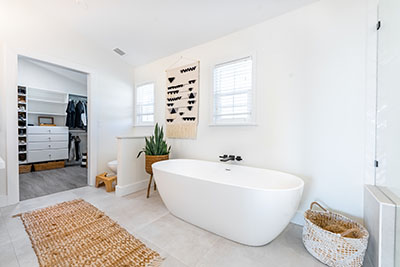 The pristine white master bath suite is offset by subtle shades of white oak and teak. 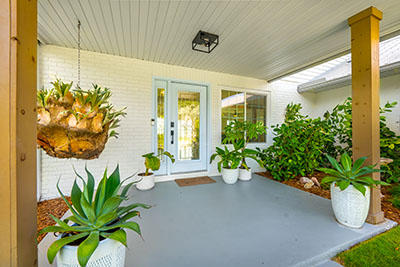 The gracious entryway to the couple’s home displays a robust, hanging staghorn fern along with other native Florida greenery.
Please follow and like us: