To Each His Own

With wide menu offerings and sports on 50 TVs, there’s something for everyone at 2nd Street Bistro

STORY AND PHOTOS BY GREG GARDNER

Using advanced technology, the 2nd Street Bistro in downtown Fort Pierce is one of the busiest and most modern restaurants on the Treasure Coast — serving more than 20,000 people a month.

Servers save as many as 2,000 steps a day using hand-held computers to transmit orders and cut down on unneeded trips to and from the restaurant’s three kitchens. With more than 75 employees, the 300-seat restaurant is open every day except Christmas.

Eighteen sound boxes can be used at tables to play the sound from any TV in the house. The size of a milk carton, the device clearly gives you play-by-play sound that would be inaudible from TVs in a crowded sports bar. A NASCAR fan can watch and listen to a race while everyone else is watching different football games.

The Hideaway Room is actually two rooms that can be combined into one for seminars, parties and receptions to accommodate 15 to 150 people. With full audio-visual capabilities, the Hideaway Room is in constant use by groups such as the Lions Club, Jeep Club and a local bar association.

The restaurant had several incarnations before owners Gary Sofen and Jeff Groth bought the building seven years ago, putting $1 million into remodeling to add a pet-friendly deck and set up the three kitchens.

Each kitchen has a different function. The majority of the food on the 100-item menu is produced in one kitchen. Another is used to cook appetizers and bake the popular pizzas. And the third is used for constant prepping and banquet service to the Hideaway.

“You can buy a beer at a gas station, but staffing, service, ambiance and great food will bring people back,” says co-owner Jeff Groth, who owned his first bar at the age of 18 in Minnesota. “We give people that wow experience and we don’t rest on our laurels.

“The secret of our success is everything is done from scratch,” he adds. “If we could raise our own chickens, we would make our own wings.”

Every Saturday and Sunday is an a la carte brunch from 10 a.m. to 2 p.m. with bottomless Mimosas and Bloody Marys. The Mother’s Day and Easter Sunday buffet brunches — with carving, waffle, seafood and omelet stations — always sell out.

There are 50 draft beers and 20 reasonably priced craft cocktails on the menu. Happy Hour is 3 to 7 p.m., seven days a week. The Bistro sells the second highest volume of Budweiser products among Treasure Coast restaurants, Groth says.

The walls of the restaurant are covered with relics of roadside Americana, large signs and all kinds of antiques collected over the years by co-owner Sofen. It is like a trip back in time including a collection of cards from the Titanic. Everywhere — even in the bathrooms — there are signs and license plates from the 1940s and ’50s. The large Sinclair gasoline sign has numerous large caliber bullet holes.

The menu is Floridian mixed with Americana and some Cajun influences, says Groth. The most popular dish is shrimp and grits, while the 10-ounce burgers — made with a mix of rib meat, Black Angus beef and brisket — are always in demand, especially on Burger Wednesdays when they are marked down to $6.99. Wednesday is also Trivia Night.

Monday is all-you-can-eat fish night. Tuesday is Taco Night. Thursday is Greek Night, serving gyros. Fridays and Saturdays there is a DJ, with Saturday designated as Ladies Night.

Every lunch and dinner there is a specials board with an appetizer, burger, fish entree, soup and dessert not normally found on the menu. With 10,000 followers on Facebook, there are a lot of repeat customers.

Dogs are welcome on the outside patio and they have a choice of Savory Salmon, Chicken Doggy Gumbo, Scoopy Stew or Ham Barker Helper.

Mike and Gail Stephanoff live just north of downtown, in the city’s historic Edgartown district, and are at the Bistro almost every night of the week.

“We like the atmosphere and we frequently try the specials,” says Gail. “My favorite dish is the chicken piccata. The help is friendly. They are so caring here. They make you feel like family.”

A serving large enough for two people, the chicken piccata comes with two very large chicken breasts covered with pasta in a savory lemon and white wine sauce, with capers and vegetables.

On the Friday after Thanksgiving, the pumpkin cranberry pie special had a delicious graham cracker crust with just the right mix of tart and sweet, accented by strawberry drizzle.

On a bed of healthy greens, six large Bistro Bang shrimp arrive in a secret Thai sauce with a little heat blended with a little sweet.
When Hurricane Dorian was bearing down on the Treasure Coast, the Bistro was the only restaurant that stayed open in downtown Fort Pierce. Employees served food until it was gone. Groth decided then to open this past Thanksgiving for the first time and he will continue that tradition. “We’re good neighbors and we have block parties and help charities,” he says.

“The 2nd Street Bistro has had a tremendous impact on downtown Fort Pierce,” says Doris Tillman, executive director of Fort Pierce Main Street. “That section of Second Street had offices and was almost a dead zone with nothing going on. The Bistro opened up the world and then everything started to happen and other businesses and restaurants came. Jeff and Gary brought the area back to life and the restaurant has been an asset for downtown.”

“We showed people that a restaurant could be successful downtown and along came the Rooster, the Braford, the Sailfish Brewery,” says Groth. “When new restaurants open up, our business seems to do well. The more, the merrier.” 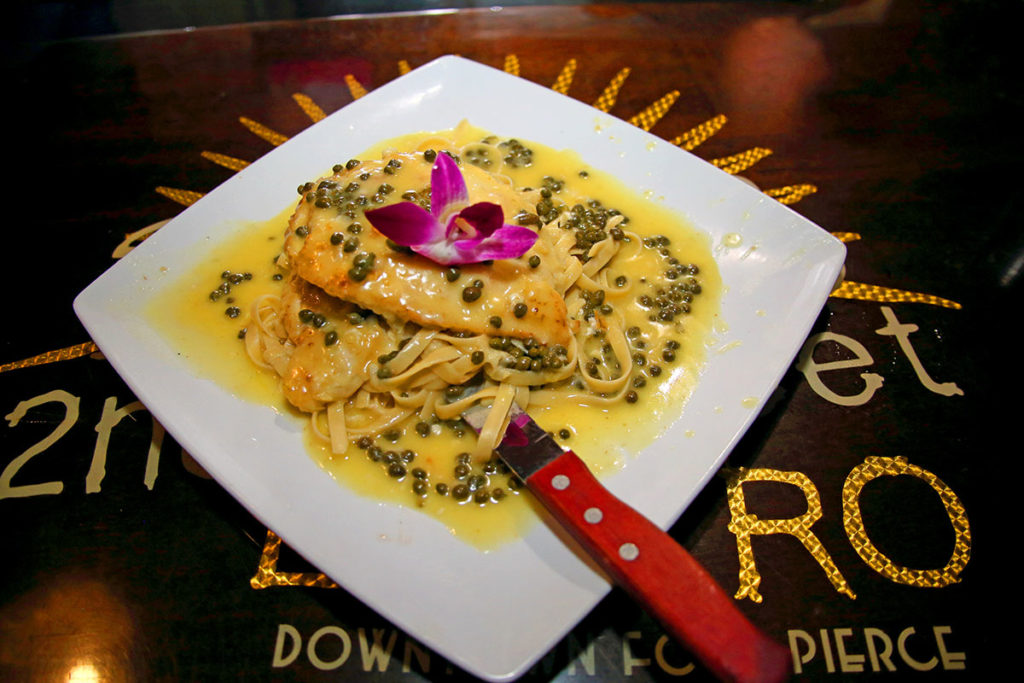 Chicken Piccata is a favorite dish with its mix of chicken, pasta and capers in a buttery lemon sauce. 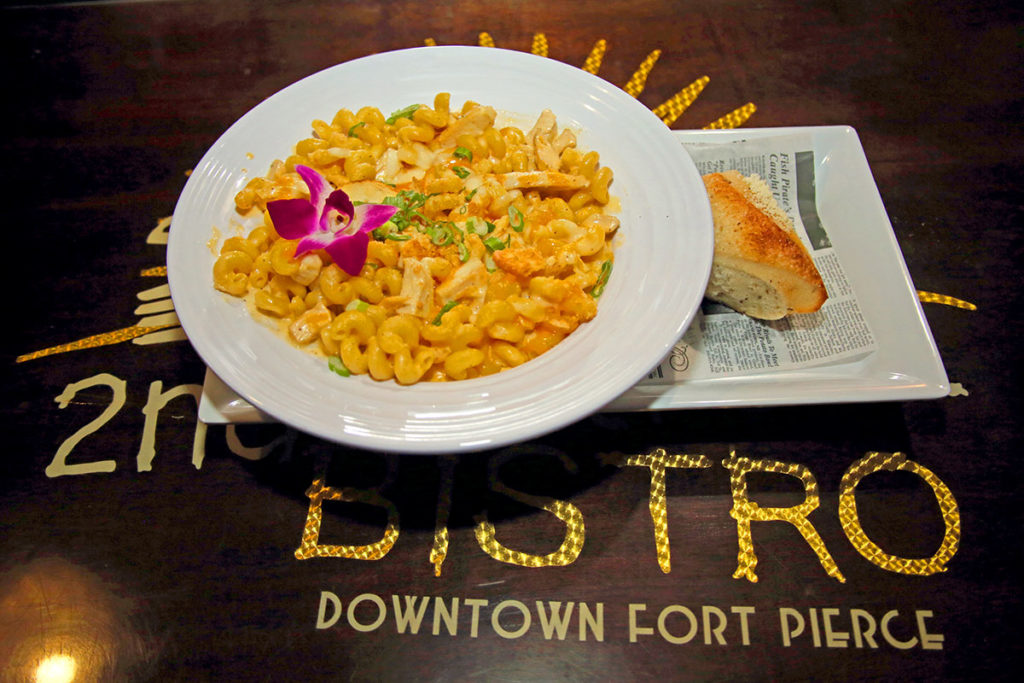 Topped with bread crumbs, the large bowl of chicken mac and cheese is served with focaccia bread. 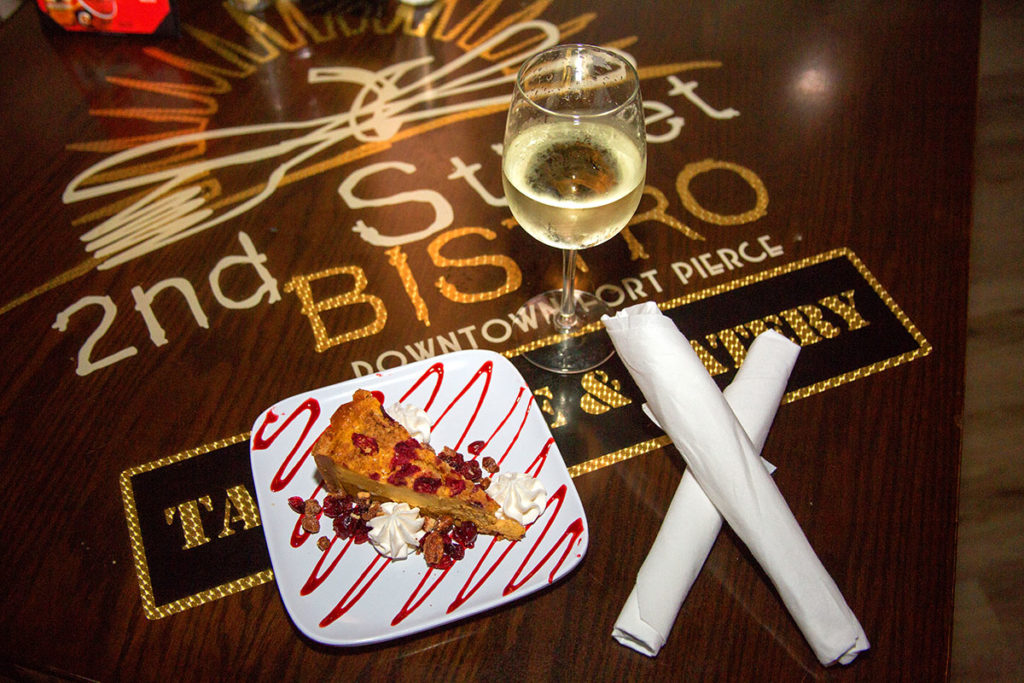 Special desserts served daily can include the pumpkin cranberry pie. 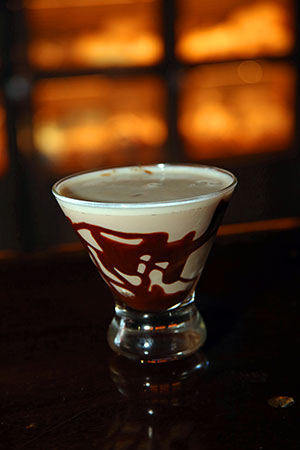 Sweets lovers can sip on a chocolate martini, one of 20 craft cocktails on the menu. 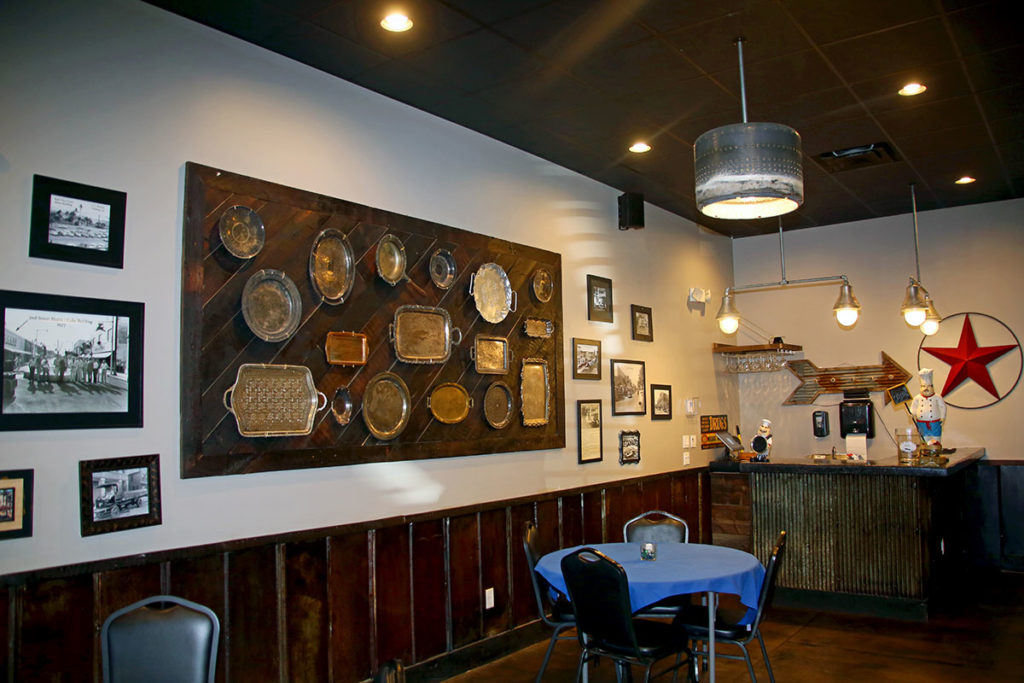 The Hideaway Room at the 2nd Street Bistro is set up to host parties of up to 150 people. Historic photos and antiques add to the decor.
Please follow and like us: