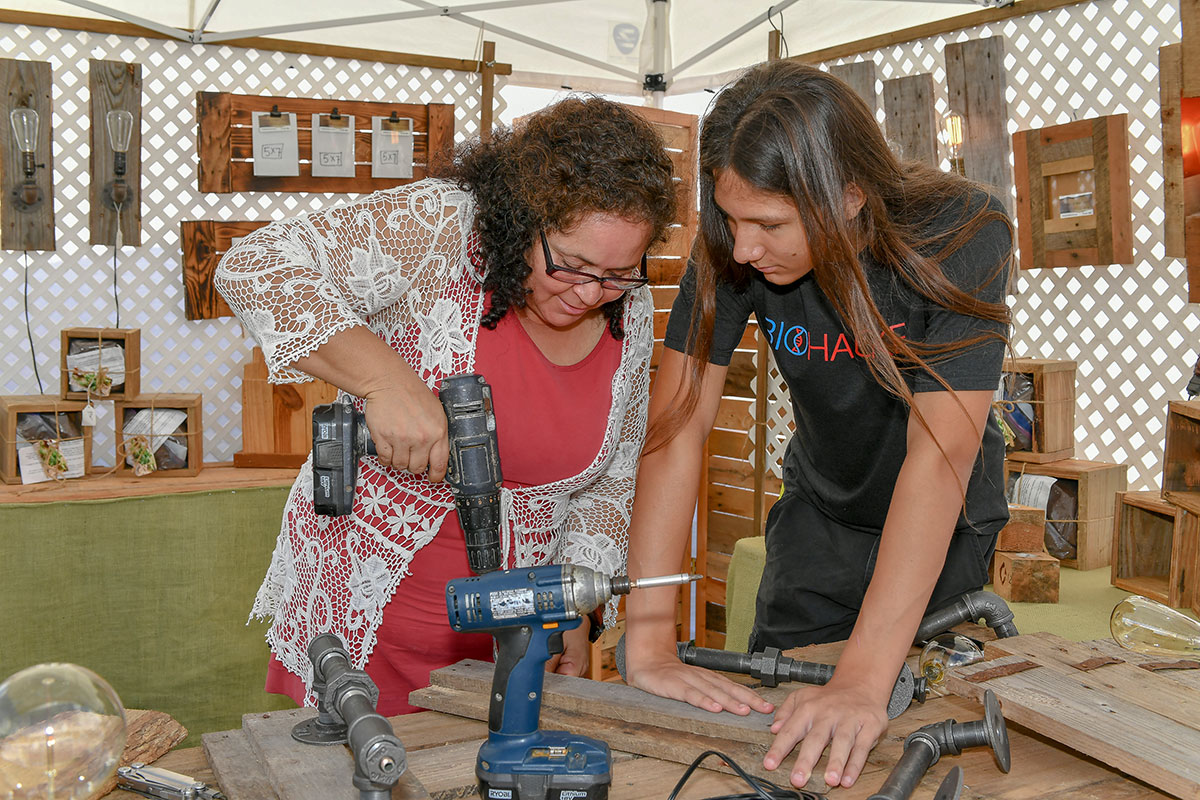 Elisabeth Gerard has turned her lifelong love of working with wood into a small business. Son Jeremiah lends a hand with the work and helps her sell the items at the Fort Pierce Farmer’s Market on Saturday mornings. ED DRONDOSKI

As her life was progressing, Elisabeth Gerard, who so enjoyed helping her father in his workshop, had no inkling her love of working with wood would come full-circle in sunny South Florida.

From the age of 4, she treasured the hours she spent creating small wooden items with her father guiding her tiny hands. Today, some 40 years later, she is using all those skills and recycled wood to create interesting small items and even pieces of furniture she sells at the Fort Pierce Farmer’s Market.

As she grew older in The Netherlands, Gerard got the itch to travel. She backpacked through Europe and then, at age 24, she and a friend traveled to Minneapolis, Minn., which was the new home of a mutual friend from The Netherlands. They made some money doing hair wraps, but with winter approaching, their friend suggested they take their artistic talents to the Sunshine State, a land of continual opportunity via the tourist trade.

That plan was a bust; the pair found their hair-wrap talents could not put a roof over their heads or food on the table. Friends they met told them to go to Miami to look for work.
“We really owe a lot to the homeless community in Miami,” she said, “They showed us where to eat and sleep. We were flat broke.”

In the aftermath of Hurricane Andrew, word on the street was that construction companies in Homestead were desperate for workers who could live the rough life during the rebuilding and were willing to work. The two friends moved farther south.

Fate fell into play. Gerard’s husband-to-be was in Homestead working with his family on the rebuilding effort. “His father asked him to give his tent to the ‘little Dutch girls,’ as they had nowhere to sleep,” she said. Eventually, her friend moved back to The Netherlands, Morgan Gerard moved back into his tent, and the two have been together ever since.

Married 25 years, the couple joined a Mennonite Church community in Homestead, but moved to St. Lucie County for better job opportunities in 1996. Parents of a daughter and five sons, they settled in to small-town life, joined a church and Gerard began home-schooling her children through a Christian program at her church. “We never wanted to spoil our children,” Gerard said, adding that raising productive citizens was their goal.

Since her husband knew her passion for creating things with wood, he would pick up scraps at his construction site and bring them home to her.

“I could make things better than what you could buy,” she said, with a laugh. “When our son David needed a high chair, I took the wood scraps and created one. It was better than the ones you could buy, more like an old-fashioned one. It might not have looked as pretty, but it was sturdy and had a large tray. If one of the kids needed a desk for school work, I built one. I built bookcases, bed frames and many other items around the house.”

She and Jeremiah, her 16-year-old son, laughed as they remembered a wooden dollhouse she built for daughter, Nadia. “I had rough and tumble boys, so I had to make it indestructible,” she explained. Jeremiah chuckled as they recalled the sledge hammers it took to break the dollhouse apart for disposal.

A woman at her church kept urging her to get her GED, as she hadn’t finished schooling in The Netherlands. After a lot of nudging, she headed to Indian River State College’s adult education program at what is now the Pruitt Campus in St. Lucie West.

It took her very little time to study for the test, and her teachers took an interest in her, she said. They encouraged her to apply for scholarships. She received an award and went on, attending college part time along with her three older children while continuing to teach the younger ones at home. It was a busy life.

Earning an associate degree in political science in 2008, Gerard was invited to join Phi Theta Kappa Honor Society and started working toward a bachelor’s degree, but had to stop to focus on her younger sons and their schooling.

“At the college, I learned to buy local and participate in community-service projects,” she said. That said, she and her family spent a lot of hours on the weekends with Jim Oppenborn, a St. Lucie County coastal official, bagging and deploying oyster shells in an effort to help cleanse the water in the Indian River Lagoon. She also began to frequent the farmer’s market after the bagging efforts and spent some money buying local products.

Her children told her she should open a booth to sell her wooden items. She had been making large 3- by-7 wooden planters from recycled pallets. She also placed some furniture in a consignment store in Stuart and then got ideas for some smaller items she could create and sell at the market.

Thus, Cottage Crates Crafts became a business. Jeremiah works with her in creating the pieces and manning the booth. He built the website, CottageCratesCrafts.com, and maintains it. The two make rustic wall sconces with vintage industrial lamps, using barn or pallet wood, with plumbing pipes for fixtures and industrial globes.

“I like to use the Edison light bulb,” she said. “It throws a really warm light.”

“There are a lot of children today who have never seen anything grow from a seed,” she said, “I created the small boxes especially for them.”

Gerard praised the City of Fort Pierce and its workers when talking about entering the business world. She remarked how helpful everyone was and how supportive the city is of its artists. She is trying another venue: Main Street Vero Beach Vintage Market, which is held in Downtown Vero Beach on the second Saturday of the month from October-March.

“I always knew that the smell of wood was special to me,” she said. “When my older boys were small, I used to put them in a stroller and walk to the Lowe’s near our home. I would walk through the lumber aisles. The smell was wonderful.”

And, I am sure, the smells take her back to those happy days working with her father in his little workshop.

Who inspires me: “My daughter, Nadia, inspires me because she always stays composed and has such self-control, despite any adversity thrown at her.”

Something no one knows about me: “I am a very open person and I can’t think of anything no one would not know about me. Something people should know about me is that if you ask me something, I will give you an honest answer.”