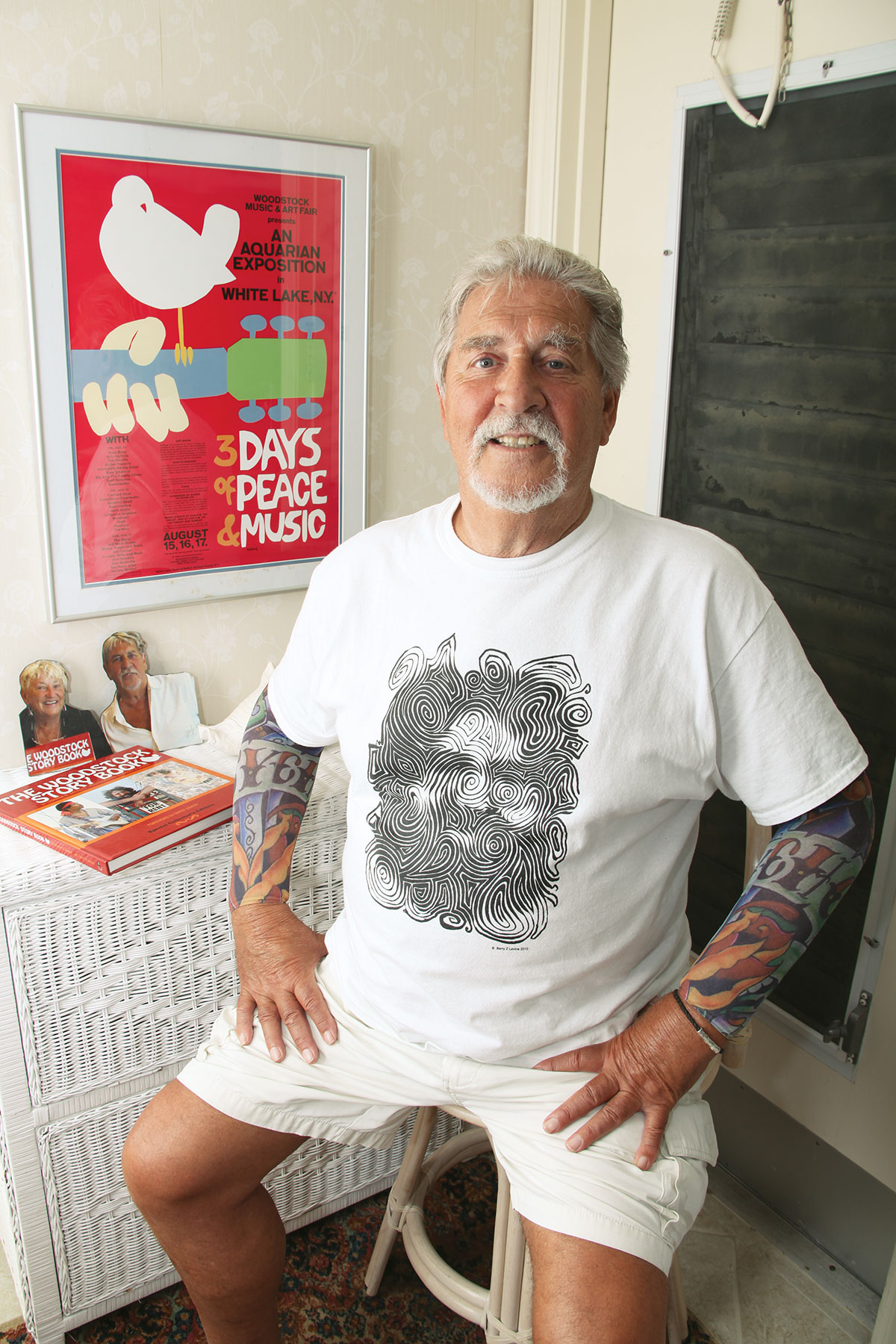 Once a hippie always a hippie. Barry Z Levine was the official photographer at Woodstock and to this day he likes to play the part when he talks about the music festival. Those tattoos are sleeves that come on and off at will. GREG GARDNER PHOTO

The spirit of Woodstock lives on with Barry Z Levine and he just can’t let it go.

As the still photographer for the 1970 Oscar-winning documentary film Woodstock, Levine shot roll after roll of film, but only a handful of the images made it into the movie. Levine, who added the Z to his name to set him apart from other Barry Levines, did publish The Woodstock Storybook with 300 color photos and regularly attends Woodstock-themed events.

The Hutchinson Island resident was in the music advertising business in 1969 when the film’s director consulted him on the acts for Woodstock, which was to become the world’s largest music festival in upstate New York.

“I was working for Columbia Records and heard about this show with Janis Joplin, Jimi Hendrix, Crosby, Stills, Nash and Young, Blood Sweat and Tears,” says Levine. “The music business is built on hype and I thought it was bs.” He was offered the job as still photographer with one catch — no money up front. Levine agreed as long as he would own the images. The film crew came in with a huge brick of slide film and he pulled out his Nikon and began shooting.

“It’s fat luck. I’m very, very fortunate,” says Levine. “I am proud to have been involved with a worldwide phenomenon with so much good attached to it. There were 500,000 people in the most adverse conditions — hot sun, rain and mud without enough food, water or toilets. They said we were dirty hippies invading their town, smoking pot and raping their daughters. Women could walk around naked. There were no crimes and no one was raped.”

Levine credits his transformation into “the Woodstock photographer” to his wife, Linanne. The images had been sitting in a drawer for 38 years. “I didn’t value what I had,” he says. “Linanne looked at the photos. She wrote me a poem and that is how the book came about. She designed the book. We fell in love and were married at Woodstock on the 40th anniversary. She made me what I am today.”

His film was originally processed by Life magazine, but they did not use any images. Some of his images were used in a later reissue by the magazine. His photos have appeared in every book about Woodstock and numerous magazines. To this day, Levine trolls eBay to seek out people who steal his iconic images.

“Copyright only gives you the right to spend money to protect it. Everything is copyrighted. I sued and I was much better off before than after I spent $200,000.” Levine doesn’t want to put a number on how much money he has made from his photos, except to say, “Woodstock has been very, very good to me.”

Woodstock lives on with Levine’s iconic images, from murals in Italy to condom packages. “I’m debating on whether to put my name on condom packages,” he says. “They are sending me a box. I could use them as business cards.”

Levine was active politically before Woodstock and he clearly remembers those turbulent times. “It was 1969 and Nixon was president,” Levine says. “We were going to change the world tomorrow. We were hippies and we didn’t need the suits to tell us what we could do. But if you had long hair, you could get your head bashed in. At the March on Washington, the White House was ringed with machine guns pointed at us.”

Shortly after Woodstock, Levine fled to Holland, vowing never to return. After two years producing a radio program in Amsterdam, it was time to come home. “It is not easy being an ex-pat,” he says. “The only work I could find was tearing down buildings with a sledge hammer or cleaning the Heineken beer tanks. I moved to Los Angeles because it was like another country from New York, where I grew up 30 miles east of Woodstock.”

Levine became a video producer, founding the All-Stars Talent Show Network, kind of a forerunner to the network talent shows today, but with a completely different mission. “It was the most successful anti-violence program for inner-city youth in the world,” he says. “It was cops and kids. It gave cops a connection with the communities they police.” The program was used in San Francisco, Dallas, New York City, Los Angeles and Chicago.

Gloria Gaynor was only one of the artists Levine produced music videos for, long before the creation of MTV. He is working on a documentary film — Where’s Woodstock? — “about what happened to the spirits, ideals, dreams and lifestyles of people who were at Woodstock.” Levine also plans to be involved in the 2019 50th anniversary concert, which he says is planned for the Atlanta area, to “bring back everyone who is still alive for a master concert.”

“Woodstock was three days that shook the world with peace, love and music,” Levine says. “All over the world, everyone wishes they were there.”

What inspires me: “Progress in human rights inspires me. The values and the ideals of Woodstock inspire me.”

Something most people don’t know about me: “I have six toes on my right foot.”