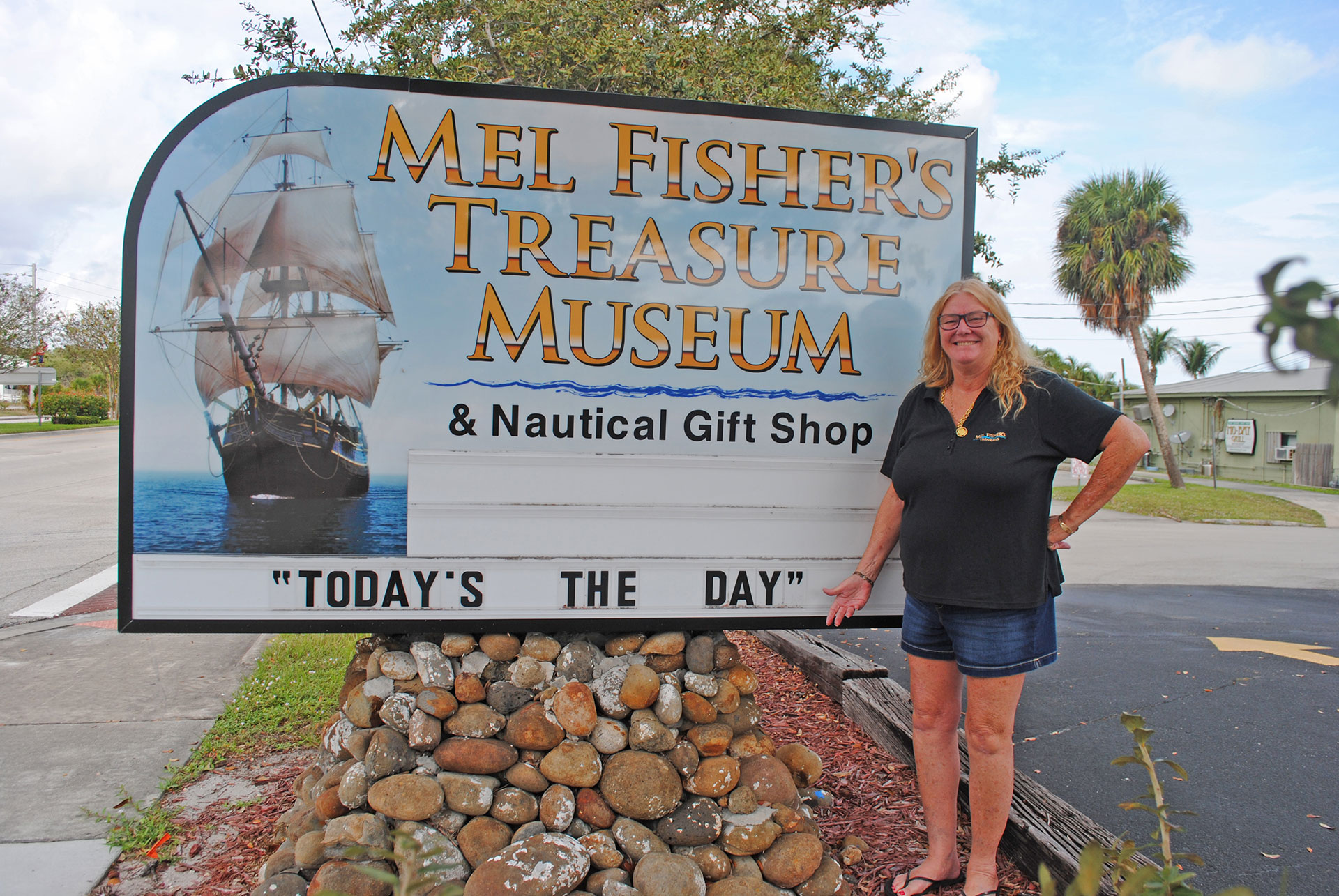 Taffi Fisher Abt, a partner in the family salvage business, had her father’s motto added to the sign outside of Mel Fisher’s Treasure Museum and Gift Shop.

Much like her famous father, diver and treasure hunter Mel Fisher, Taffi Fisher Abt has experienced monumental highs and heartbreaking lows, but her relentless perseverance and indomitable spirit continue to chart her course through life.

The Sebastian resident was born in California, the youngest child and only daughter of Mel and Delores Fisher, a colorful, entrepreneurial couple who had already opened the first “dive shop” in the state and introduced thousands of novice divers to underwater exploration.

“I wore my first wetsuit when I was just 3 months old,” says Taffi. “The ocean was our playground and my father was the captain of the ship.” Mel had a very successful scuba diving business and even a weekly TV show in California, where he would show his underwater films. Delores set the world underwater endurance record of more than 55 hours and 37 minutes by sleeping in a hammock with a weight belt across her lap and changing air tanks every two hours. They were the unofficial king and queen of the underwater world.

Yet the seductive dream of finding sunken treasure from the ill-fated 1715 Spanish Plate Fleet, which sank off the coast of Florida, lured the Fishers to uproot their family and move to Vero Beach in 1963 when Taffi was only 2.

“My first memories are from living on Banyan Road and playing on Vero’s beach,” she says. “I honestly don’t remember when I learned to swim, but I was told that I nearly drowned once in the pool at the old La Posada Inn on Ocean Drive. I was later given swim lessons from Millie Bunnell, one of the original Dolphinettes (synchronized swimming group), at the old Riomar Country Club.” Taffi attended Beachland Elementary School and remembers the early treasure hunting days fondly.

“Dad would sell anyone a piece of the elusive treasure for just $20 a share and he’d hold huge stockholders’ meetings where everyone would meet at Humiston Beach,” she recalls. “He’d show up with metal detectors and shovels for all and have a tractor rake the beach. Then everyone would follow behind looking for treasure. One thing everyone remembers about my dad is that he loved a party, and even his business meetings were an adventure.”

Mel Fisher’s team of Treasure Salvors, Inc. and the Real Eight Company joined forces in the quest for the 1715 shipwreck treasures. They gave themselves exactly one year to search with the agreement that if that year passed with no result, they would return to their previous lives. Their electronics had located the wrecks, but the divers’ inability to see in the murky water had yielded them nothing. In the spring of 1964, with only days left before their self-imposed deadline, Mel ingeniously devised an apparatus called the “mailbox” that shot a layer of clear water to the bottom of the ocean floor. While testing it, the sands parted and the bottom was paved with gold. That’s when a gold rush began in Vero Beach.

“After the gold was discovered, Dad was a hot commodity and I remember him doing a photo shoot at the Driftwood Inn with his dive team in their gear, surrounded by models dressed as mermaids. They were promoting the scuba equipment for a magazine ad.”

When Taffi was 9, she moved with her family to Key West as her father chased an even bigger treasure from the virtually unsalvaged Spanish galleon named the Nuestra Senora de Atocha, which sank off the Florida Keys in 1622. Believed to be the richest of all the sunken galleons, Mel had found a new quest worthy of his greatest effort.

“By the time we moved to Key West, my dad was already well known,” Taffi says. “Some of my classmates thought I had the coolest dad ever — a bigger-than-life swashbuckling, risk taker. Others thought I was the child of a kook or con artist who was taking other people’s money just so he could play in the ocean. I didn’t care because my dad always taught me to have confidence in myself and not to listen to what others said. He always told me that those who made fun of others were simply jealous.”

After school Taffi would go down to the waterfront where the family’s replica galleon was docked as a floating museum, showcasing some of the treasure they found in Vero Beach. The tourist attraction brought in money from visitors and helped entice investors to finance the Atocha exploration. She’d spend her afternoons helping her mother at the museum and as she got older, she would crew for the salvage boats. She was always hands-on in the family business from a very young age.

In 1975 tragedy struck the seemingly charmed family. Dirk Fisher, Taffi’s oldest brother, had found five of the Atocha bronze cannons while free diving in deep water. Everyone thought the Atocha’s mother lode was about to be unearthed. Instead, in the early morning hours while everyone slept, the boat took on water, trapping Dirk, his bride, Angel, and diver Rick Gage within. They all perished, and the family was devastated. But the Fisher spirit prevailed and they decided to press on in search of the Atocha mother lode because they believed that’s what Dirk would have wanted. “Losing my brother was horrific, but I think it prepared me for what would come later in my life.”

In 1980, ten years after initiating his search for the Atocha, Mel’s team found the Santa Margarita, a ship that was part of the sunken 1622 fleet — and it yielded millions in gold. While elated, the Fishers continued their quest for the Atocha and five years later finally found the mother lode, parlaying them onto the world stage and establishing them as the world’s greatest treasure hunters.

“Of course, I will never ever forget that day and the celebrations that followed,” says Taffi. “By this time, I had graduated from high school, married and had children. I always loved Vero, and in 1989 I decided to move back. I opened the Mel Fisher Treasure Museum in Fort Pierce and then moved it up here to Sebastian. I ran the museum; my husband ran his tractor business and we were raising four children away from the spotlight.”

Taffi is still a managing partner with her brother, Kim, of the salvaging companies that are still working on the Atocha, the Margarita and a few other explorations, but they’ve sold the rights to the 1715 fleet. She travels down to Key West frequently for stockholder conferences, business meetings and company parties but enjoys the laid-back lifestyle in Sebastian.

Her focus and life mission changed in an instant when her 12-year-old son, Michael, collapsed on the school playground in 2006. “He died of cardiac arrest,” Taffi explains. “I never heard of kids dying from heart problems, but I have since found out that it’s not uncommon.”

Taffi turned her grief into action when she set up the Michael Abt Jr. Have a Heart Foundation with the goal of saving children’s lives through the donations of AEDs (automatic external defibrillators). “Had an AED been used on Michael, he may still be alive,” she says. “Anyone can use one and they can literally start a heart.” The foundation’s mission is to ensure that AEDs are placed in schools nationwide as well as with youth athletic program camps and other places where young people convene. Through generous donations the foundation has raised enough money to place AEDs in all Indian River County schools and provide free training for any school district employee.

Cardiac arrest is most common in children playing sports with a higher occurrence among the black population and in the sports of basketball and cheerleading. “Usually the first sign is when they collapse,” says Taffi. “But it can be detected early with an EKG.

Unfortunately, the sports physicals required by our schools don’t require an EKG, but every parent should consider getting one for their child. Our goal is to spread awareness. People need to understand that this happens; so, if there is any family history of heart problems under the age of 50, or if the child has a shortness of breath or fainting, please get an EKG.”

Taffi’s daughter, Nichole, took over the daily operation of Mel Fisher’s Treasure Museum shortly after her brother’s death and manages it to this day. “I was in a fog and focused on making Michael’s death make a difference in the world. Nichole stepped up to the task.”

Taffi now works behind the scenes, digitally archiving records from the past before the age of computers. She stays active in managing the ongoing treasure salvaging expeditions and, like her father, loves to entertain the investors. “Once a year we have huge stockholders party in Key West and we party in a fashion that would make my dad proud!” She is also working on a biography about her parents and their family’s legacy.

Through good times and bad, Taffi has met life’s challenges with the same uplifting, infectious spirit that flows through the Fisher clan. “I had the greatest role models in the world,” she says. “They taught me to follow my dreams and to shirk conformity. I love to see a wide-eyed child stare at a gold doubloon in wonder and take an interest in its history. History seems to be lost in this electronic age, but the fascination of lost treasure still has appeal. I never even realized my dad was making history, but that is the true legacy of the Fisher family, and it will be carried on from generation to generation. My dad used to say that we are only temporary custodians of this treasure — it lives on long after we do.”

Learn more about AEDs and the Michael Abt Jr. Have a Heart Foundation at www.haveaheartformichael.org.

TAFFI FISHER ABT
Age: 57
Lives in: Sebastian
Family: Husband, Michael; sons, Josh, 34, and Melvin, 21; daughter Nichole, 34; one grandson.
Education: Studied museum curation at Smithsonian Institute, Washington, D.C.; took courses in cultural anthropology, Indian River State College, Fort Pierce.
Hobbies: “I love to read, go four wheeling and spend time with my family, especially with my 5-year-old grandson, Jace.”
What inspires me: “My children. You always want your children to be happy, and finding ways to help them without interfering is always a challenge.”
Something most people don’t know about me: “During the Mel Fisher Days in Key West, I go around town soliciting donations for a silent auction fundraiser we hold to help foster children at the Wesley House Family Services in Monroe County.”