Most students are reprimanded for making noise in class, but it’s just the opposite in Maggie Baker’s drama class at Saint Edward’s School in Vero Beach where she teaches the art of Foley sound effects. Children giddy with laughter learn to write their own scripts, act them out silently, then produce and edit the sound effects to match the action.

“This course is given to all sixth graders at Saint Edward’s Lower School,” Baker said. “And if you’ve had any experience with sixth graders you know that they are antsy and full of energy, so offering a class where they learn how to make new noises is just what they need to break up their day.”

Baker and her husband, Jeremy, who is the technical director for the drama department at Saint Edward’s, became National Geographic certified teachers with their capstone Foley Sound project. In order to become certified you have to work with the National Geographic organization to complete projects that fall within its science guidelines. Foley sounds are a mixture of science, fun and imagination that are added to films, videos and other media in post-production to enhance the audio quality.

Baker has headed the drama department for 11 years, transitioning into teaching after a lifetime career in stage management. The daughter of actors, she knew early on that a career in theater was her destiny. After graduating from San Francisco State University with a degree in acting and a master’s in directing and stage management, she dived head first into her theatrical career working as a stage manager at Music Circus in Sacramento. From there she held stage manager positions in Utah, New York and other venues in Sacramento.

“While I was in New York, I directed showcases which are equity productions where the actors don’t get paid,” she said. “They do it for exposure with the hope that a scout will recognize them, and the talent is first class. It was a very gratifying experience to work with such talented actors.”

It was Riverside Theatre that lured Baker to Vero Beach from her job as a stage manager for the Florida Studio Theatre in Sarasota.

“I moved here and worked as stage manager at Riverside for three years. Perhaps the best perk of working for Riverside is that it was there that I met my husband,” she said smiling. “Jeremy was working in the children’s theater and we fell in love. I took off a couple of years while I was having children and then decided to focus on teaching. When Saint Edward’s offered us the position of teaching drama as a team we jumped on it.”

“Transitioning from working with professional actors to working with children was really easy,” Baker explained. “I’ve always been somewhat of an educator because I would always have assistant stage managers who I would mentor and teach, so that part of it came naturally. I just went back to how I was taught and adapted it for younger students. I believe in impromptu, creative learning so I don’t give them scripts. We learn as go.”

Perhaps that’s why the kids love Baker’s class in Foley sound effects so much. The first thing Baker does is break the students into groups and give them a fictional location to work with. It might be a castle, or a park or an attic.

“This class is taught in the fall around Halloween so we always get some eerie stories and sound effect,” she said. “They work within their group to formulate a storyline that lasts between a minute and a half to three minutes. Then they act it out silently, rehearsing until they have it perfected.

Once they feel they’ve mastered the acting, the group director shoots the vignette on an iPad.

And that’s only half the fun. Once the sketch is shot, the students start the fascinating process of creating and editing sound effects to enhance the video. They rummage through a box of noise-making objects like blocks of wood, sandpaper, hinges, wrapping paper, plastic bottles, cutlery, shoes, buckets of water, rain sticks, thunder sheets, bells and musical instruments.

Each student has to have a specific task, whether it be slamming a door, emulating the sound of footsteps or breaking glass. On the editing table, with a towel on one end to mute any sound of setting down an instrument, the students carefully create the sounds to lay behind the video as they are watching it. Other groups watch the process on a big screen as the group creates the sound effects.

“The kids are absolutely mesmerized by the process and have a blast doing it,” Baker said. “I start the class by giving them insight on how a famous scene from Jurassic Park was enhanced by Foley sound effects.”

She went on to explain everyday food items were used for the scene where the baby raptor is hatching from its egg. The cracking of his shell was made by crushing a large ice cream cone. The goopy sounds of embryonic fluid were made by a sound artist squishing his hands in a freshly cut cantaloupe and the sound of cleaning the baby raptor was made by rubbing dishwashing soap on a pineapple.

“The best part of my job is seeing the difference that acting and creating sound effects can make in the students’ lives,” Baker said. “They become more confident and more secure in who they are and more secure in presenting that to the world. Many times, shy children are more comfortable presenting someone else by acting a character on stage. Aside from the obvious effects it has on their diction, projection and public speaking, the skills they learn in drama class carry through to every aspect of their lives. And of course, the power of applause is immeasurable.” 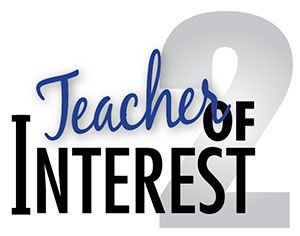 Lives in: Vero Beach
Age: 56
School: Saint Edward’s School
Family: Married to Jeremy Baker; two children
Education: Master’s degree in directing and stage management from San Francisco State University
Background: Spent most of her career as a stage manager for theaters in San Francisco, New York and Florida
How I got into teaching: “I took time off from theater to have children and wanted to have a more workable schedule for my family. I always mentored assistant stage managers so teaching came naturally. Now I mentor children in the craft I love.”
What I like best about teaching: “Seeing the transformative power of theatre and what it can do for kids. It builds self-esteem, confidence and breaks down barriers that go beyond the class setting.”
Something my students probably don’t know about me: “My mom is from Great Britain and I was almost born there because it has national health care, but I was born early as a U.S. citizen.”