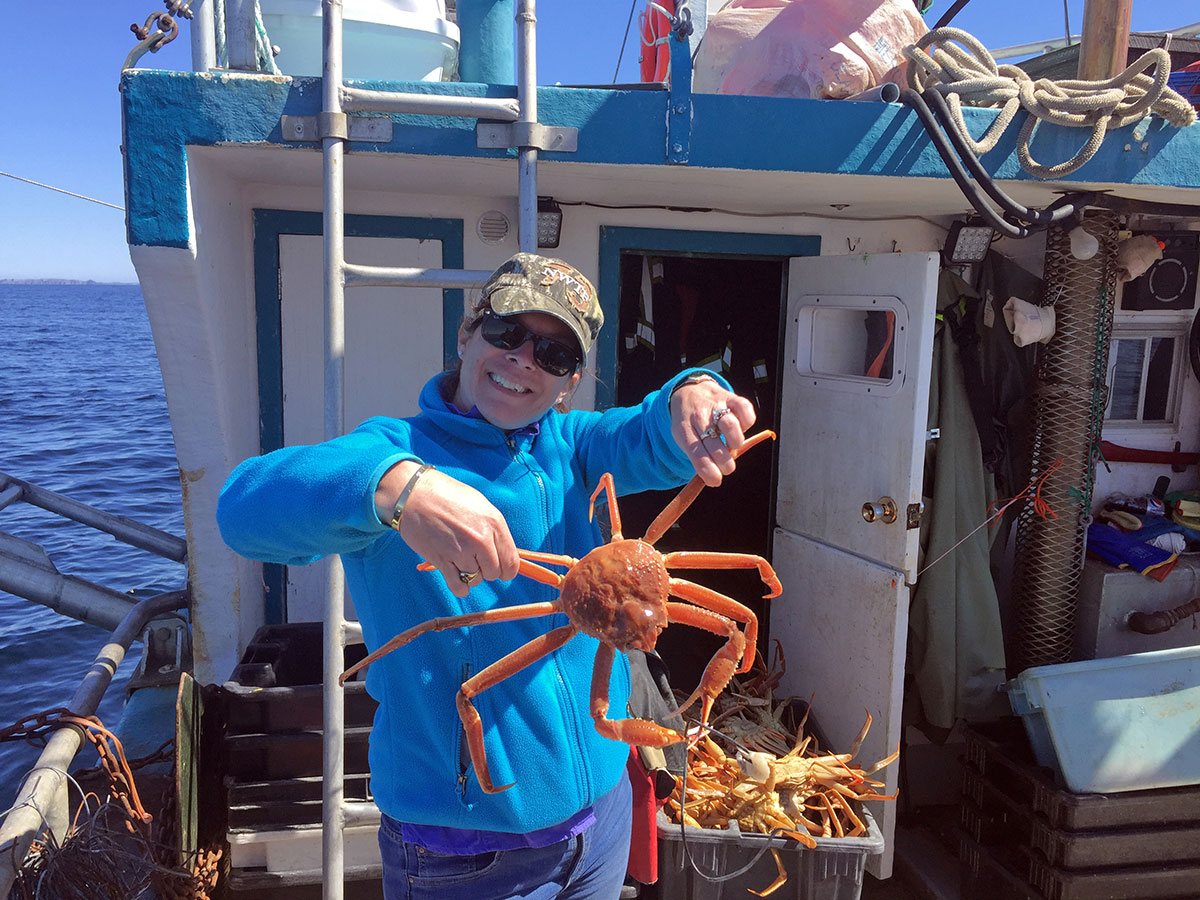 As a recipient of a Brickman Foundation grant, Kerryane Monahan researched the impact of climate change and pollution on fisheries in Newfoundland, Canada. She’s pictured here with a snow crab caught onboard the Southern Pride off Twillingate, Newfoundland, in June 2018. KERRYANE MONAHAN

Fellows work alongside National Geographic staff to ignite the spirit of exploration in the next generation, providing classroom resources and experiences that reach millions of students each year. It’s an honor extended to only eight individuals in all of North America.

“To say I’m honored and humbled is an understatement,” exclaims Monahan. “I never in a million years thought I’d be selected, and I’m still pinching myself. I am truly in the company of greatness.”

Monahan’s journey started 16 years ago with an epiphany she had while scraping ice off her windshield during a particularly brutal winter day in Boston. She came to a sudden realization that she didn’t have to live in those conditions. In that moment of clarity, she went back into her apartment, called her boss at Boston University and told him she would not be in that day, or the next day or ever again. “I enjoyed the teaching I was doing, but I wasn’t happy in the lab. I wasn’t sure this was the path I wanted to pursue, and since I had been in school forever and I thought I needed a year off.”

Without looking back, Monahan packed her bag, took a train to the airport and asked the ticket agent where the next flight was heading. Fort Lauderdale was the answer, and she jumped on board. She had no plan or destination, just a burning desire for change.

“When I landed in Fort Lauderdale, I rented a car and headed north on A1A,” she says. “I got thirsty by the time I came to Fort Pierce and stopped for a drink. I wandered into the House of Seven Gables Visitors Center and started talking to the volunteers who told me all about the area. They suggested I go over to Pepper Park (on North Hutchinson Island) to see the beaches, so I did. I got out of the car and walked down a path that took me through a sea grape tunnel opening up to the most beautiful view of the ocean I had ever seen. I was hooked! I knew I wanted to live here.”

Still reeling with enthusiasm for her newfound paradise, Monahan walked across the street and told the realtor she wanted to buy a house. She quickly found a lovely townhome on the island, put in an offer and went to Maine where her mother lived to tell her what she was doing. “My mother said, in her thickest Massachusetts accent, ‘Are you crazy?’ ” Monahan says with a laugh. “But she ended up being very supportive. I came back down to Florida, secured a job as a science teacher at Fort Pierce Central High School and closed on my home just two days before school started. It was a whirlwind to say the least, but I just felt it was the right thing to do and I trusted my gut.”

Monahan taught there from 2003 through 2011. “I worked with great people at Fort Pierce Central, and they taught me everything I know about teaching. I taught environmental science and biology and even started their science dual enrollment program. But there were things I wanted to do that I couldn’t because of the constraints of public school.”

That’s when the opportunity to teach and chair the science department at St. Edward’s School presented itself. “Moving to St. Edward’s allowed me to expand my teaching scope and fuel my passion for citizen science, encouraging students to become change-makers for a better world.”

Monahan believes that science is literally for everyone, and it plays out in every aspect of our lives. Her goal is to enlighten students to raise the consciousness of everyone around them. “We can’t have a functioning civilization if we don’t have a population that can think scientifically. Not everyone has to be a scientist, but everyone needs to have a basic understanding of science and how to interpret data, then together we can make a difference.”

It was her lofty thinking and creativity that got her noticed at the National Geographic Society. “A few years ago, I was at a National Science Teachers Association conference and I saw a National Geographic booth, recruiting teachers to sign up for their beta certification program.” The National Geographic Society funds both the explorers and education programs. The education branch created a certification program where it developed a learning framework for education, which took in common core, state, and national standards. The program identifies a set of learning outcomes: attitudes, skills and knowledge. Some of the attitudes are curiosity, empowerment, observation and taking action. “They got me, hook line and sinker, because I want my kids to be curious and I want them to feel the power of taking action.” Needless to say, she signed up for the program, took the on-line classes and got the certification.

It was the creativity and originality of her final video project that garnered the attention of the folks at National Geographic. The project, connecting locally endangered species with the root cause of that endangerment with other species around the world, was humorous and engaging. “The staff loved it and asked me if I would become a trainer for other teachers. Of course, I said yes, and I proceeded to lead workshops on both coasts. That’s when I had the opportunity to spend time with the National Geographic staff, and I soaked up every bit of knowledge they shared.”

Monahan was shocked when she got a phone call saying that she had been nominated to be a National Geographic Fellow. They were looking to expand their educational programs to make citizen science more accessible to teachers and their students and thought she would be a good advisor. Citizens science is simply when nonscientists collect data and enter it into a central data base. With thousands of ongoing citizen science programs that anyone can take part in, they needed advisors to help create a web source for teachers and programs on how to engage students. It was right up her alley, so she filled out the application, which was as arduous as writing a grant. “I figured that if I didn’t get the fellowship, I would have gained knowledge and experience from the process.”

Last August Monahan got the phone call that would change her life forever. “They told me I was selected as one of eight fellows in North America. I jumped up and down screaming. This is a dream come true. I am the luckiest teacher on earth!” She traveled to Washington, D.C., with the other education fellows to the National Geographic Society headquarters where they participated in a multi-day workshop.

The course included a National Geographic Sciencetelling Bootcamp, where candidates learned from world-class National Geographic staff and previous education fellows about how to make the most of their fellowship. In June, Monahan will have the exclusive opportunity to attend the National Geographic Explorers conference in Washington, D.C., to share their experiences. “As a fellow I am considered an explorer,” she says. “Jane Goodall was an explorer and that is why I went into science. Now I have the same flag and designation as she does. It’s truly unbelievable.”

Even with her new-found celebrity status, Monahan is happily grounded in her role as a science teacher at St. Edward’s. The school proudly supports Monahan in her fellowship and is allowing her the time to participate in all it has to offer.

“Dr. Kerryane Monahan is a consummate professional who embodies our mission of being a life-long learner,” says Mike Mersky, headmaster of St. Edward’s School. “Her work with the National Geographic initiative, not only through her fellowship, but moreover through her leadership for our faculty and school, has been profound and has set us on a course to greater heights for our students, for our professionals and indeed for the whole school culture.”

“I am totally embracing this opportunity to expose more people to science, but ultimately my job is to engage my students to identify the most pressing environmental issues and to empower them to know that they have the ability to change the world through action,” Monahan says.

“I preach the power of one … one person … one idea … one action … can change this one planet.”

Lives in: Vero Beach
Age: 44
School: St. Edward’s School
Family: Husband, Robson Diniz
Education: Undergrad at Vassar, masters at Boston University School of Medicine with a degree in anatomy and neurobiology, doctorate at Lynn University in Boca Raton in leadership and teacher preparation in science education.
Background: “I consider myself a New Englander despite being born in New York. My parents both grew up in Massachusetts and our family home in Maine is where I spend all my free time, now and as a child. My parents were both academics, a little hippie and a little nerdy — so here I am.”
How I got into teaching: “I was doing lab work and student teaching at Boston University as part of my master’s curriculum and while I loved interacting with the students, I did not enjoy the lab as much. That’s when I decided to emphasize teaching science instead of practicing science.”
What I like best about teaching: “Kids inspire me because they see the world without the cynicism that adults have. They remind you what the world looks like through an unfiltered lens.”
Something my students probably don’t know about me: “That I’m a pretty good marksman in clay pigeon shooting and I usually get the rabbit.”