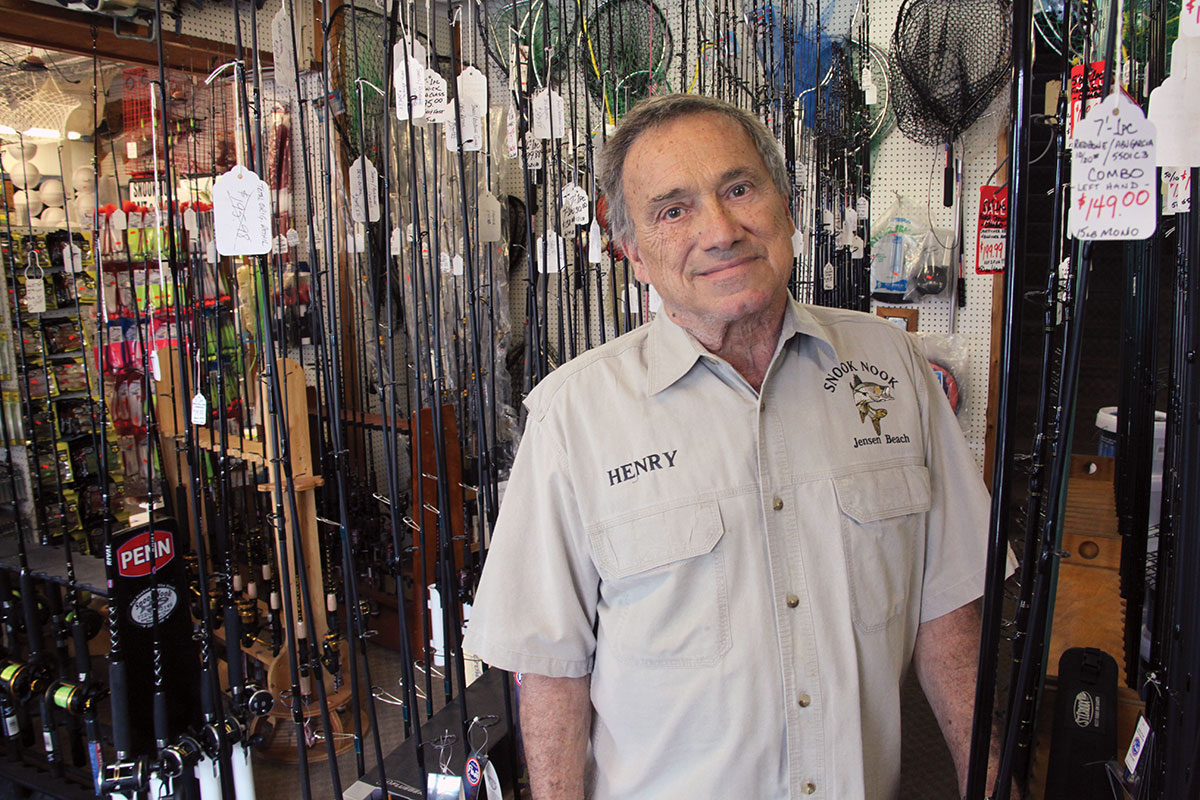 Henry Caimotto, owner of Snook Nook tackle shop, has been a driving force in the efforts to stop Lake Okeechobee discharges into the St. Lucie River. GREG GARDNER PHOTO

No one has had a louder, angrier voice in the fight for clean rivers on the Treasure Coast than Henry Caimotto, owner of the Snook Nook tackle shop in Jensen Beach and co-founder of Rivers Coalition.

“Henry is mad at the politicians and he tells them right to their face,” says Mark Perry, president of the Florida Oceanographic Society in Stuart and a board member of the coalition set up to fight harmful discharges from Lake Okeechobee into the St. Lucie River. “That is what I admire about him. He is so outspoken. He had a lot of push and he continues today. He has had great effect pulling people together. ‘Accountability’ was his favorite word and he wanted people held accountable for the damage done to our rivers.”

Perry, who has known Caimotto for 38 years, remembers the petition with 50,000 signatures and the bus chartered to Tallahassee to deliver them to Gov. Lawton Chiles. “Henry is an amazing guy. What a character,” Perry says.

Caimotto, who moved to the Treasure Coast in 1983, wrote a fishing column for years and hosted a weekly radio show, but he made the most noise on a program he hosted on Martin County’s TV channel. “People would call in and it got too controversial,” Perry says, adding Caimotto’s show was taken off the air. Prior to that, he hosted a cable TV fishing program.

“Henry is a tireless fighter and I wish we could make more of him because people have been inspired by his anger and enthusiasm,” says Karl Wickstrom, founder-publisher of Florida Sportsman magazine and an influential conservationist.

“I’ve enjoyed working with him (at the coalition),” says Wickstrom. “We are on a 50-year losing streak and he has seen the river deteriorate. He used to come to the River Coalition meetings and say we should demand action. People thought it was too strong. He was right. We should demand action to counter tremendous influence peddlers with power beyond belief. He has been a huge factor. He is depressed about the lack of good government to protect the river. Henry has been a constant foe of Big Sugar and Big Ag forces that dominate our water management system. He has been one of the best and loudest to scream about it. We should be shedding tears of thanks for Henry.”

Caimotto’s love for the rivers and outdoors had far-reaching impact on the area as he passed on conservation ethics to thousands of fishermen who have stopped by the Snook Nook as children and years later with their children.

Patrick Price is captain of the charter boat Daymaker in Jensen Beach and recent contributor to relief efforts for victims of Hurricane Matthew in the Bahamas.

“I was born and raised in Stuart and grew up loving to fish,” Price says. “If your life has involved the water in our area, you know the name Henry Caimotto. I grew up watching him on TV to get insight on where I wanted to fish with my dad and uncle on weekends. As a kid, nothing made me prouder as a fisherman than getting a picture taken with a big snook in the winner’s circle outside of the Snook Nook.

“Henry is a pioneer for fish conservation and clean water for our rivers. He has set the bar time and again, fighting for better water quality to ensure our children’s children will enjoy the Indian River Lagoon and the joy its thriving ecosystem can provide to local anglers,” Price says.

The Rivers Coalition efforts spawned The River Warriors, a group of children and their parents who have been to Washington, D.C., raising money and awareness to fight the discharges and save our rivers. The organization is a “great effort that needs to be expanded” for the future of Treasure Coast waterways, Caimotto says.

“People want to see changes only to be pushed back and they are paying more attention to our water quality,” says Caimotto, who has left day-to-day operations at the Snook Nook to his son, Fred.

“I like to be a pain in corporate ass,” he says. “We have to buy the land south of the lake. There are areas where we can buy the land and treat the water. Agriculture could care less because it is not to their financial advantage. The money is too big on their side. I blame the politicians. They know where they get their money from. They won’t do a damn thing and it frustrates the hell out of me. It is not rocket science. If it is not good for Big Ag, it is not good for the rest of the world, sad to say.”

The fight for clean waters on the Treasure Coast will continue with many of the new generation of river warriors inspired by the legacy of Henry Caimotto.

Age: 72
Occupation: Tackle shop owner and conservationist
Hometown: Jensen Beach
Family: Son Fred, 38; daughter Ally, 28
What inspires me: “Seeing someone be successful catching fish and asking them, ‘What did you do with them? Threw them back?’ Even better.”
Something most people don’t know about me: “I was a hairdresser for 20 years.”