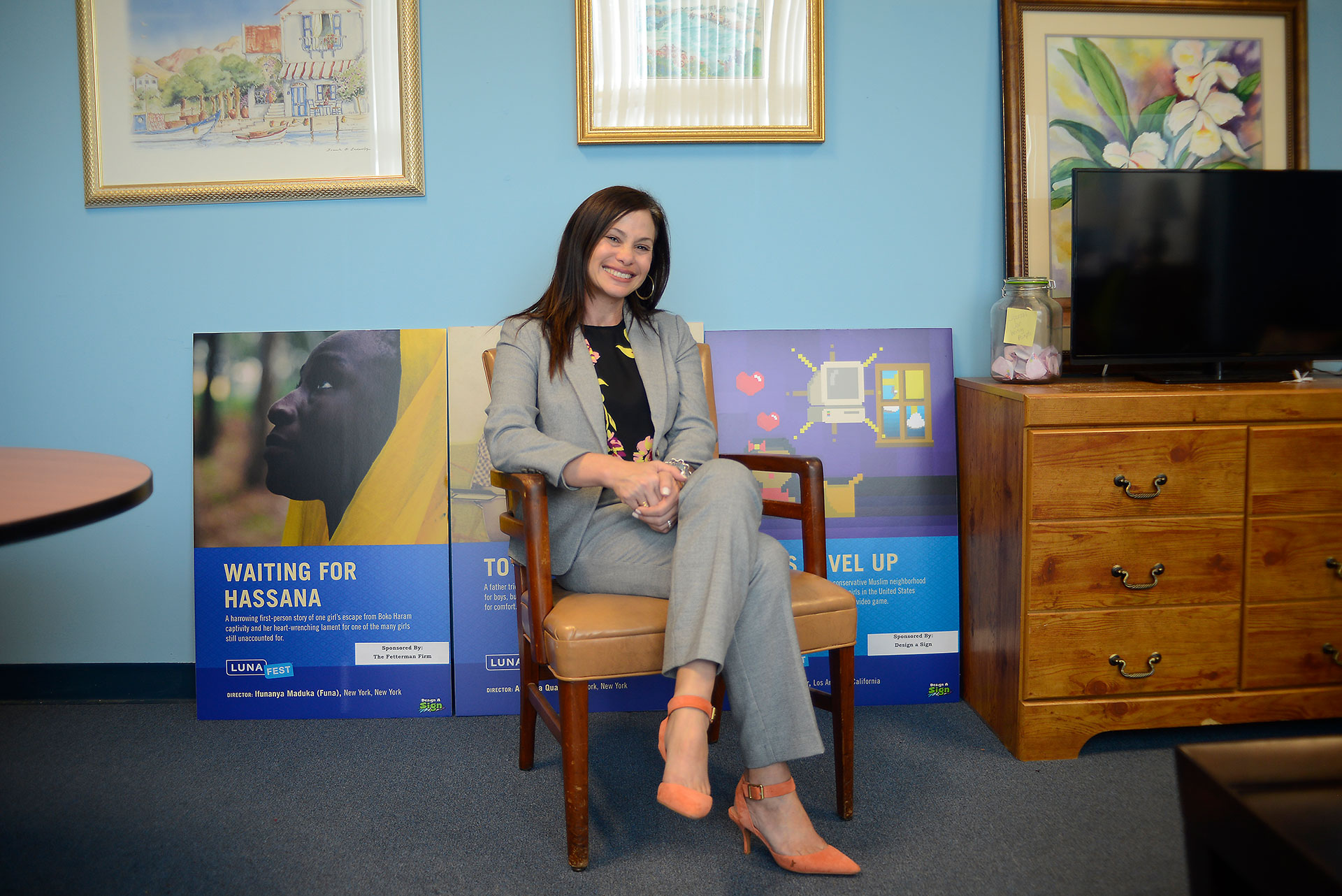 An avowed activist, Mindi Fetterman started The Inner Truth Project to provide a comforting and healing place for survivors of sexual violence.

A self-named survivor whose own recovery is deeply-rooted in helping others — who share her pain — was moved to establish an organization nearly 10 years ago with just that purpose in mind.

Mindi Fetterman, who welcomes an opportunity to state her story, has helped countless other victims of sexual violence begin their journey to healing through the different types of therapy offered at The Inner Truth Project in Port St. Lucie.

Mindi says it actually began when she spoke at a community luncheon at the Port St. Lucie Civic Center during her husband’s term as a state representative. Adam Fetterman served in the Florida House of Representatives from 2008 to 2010, and the community organization wanted him to provide an update on the legislative session. Explaining that he was busy in Tallahassee, he said they should ask his wife to speak.

“So, there I was,” Mindi says, “in front of hundreds of people. I was in this room with my contemporaries, my peers and the who’s who of the area. I was the state representative’s wife. I was wearing my suit and pearls. They expected me to be his proxy; to give his speech.

“And I got up there and said, ‘I am Mindi Fetterman. I am an alcoholic. I am a drug addict. I have been molested and I was gang-raped. Here is my story.’”

Mindi says it took her about two hours to get out of the civic center, as there was a long line of people who wanted to thank her for sharing their life stories as well. They had similar accounts they never told anybody. Months later, she would call on these people who voiced their support for her as she began to sketch out plans for The Inner Truth Project.

Mindi had been involved in Take Back the Night events on college campuses, a movement meant to make young women aware of their right to a safe collegiate atmosphere, and wanted to start a local event after hearing some local women share experiences of sexual assault during their college years. She sought cooperation from Indian River State College so the students would be encouraged to participate in the 2010 Take Back the Night march in downtown Fort Pierce. At the conclusion of the march, Mindi took to the stage to share her story. Within minutes, others followed her onto the stage to share their own stories of sexual assault, many for the first time speaking those words.

“The first Take Back the Night was successful,” Mindi says. “Many women and men of all ages took to the stage to tell their stories, to talk about the sexual violence they had experienced. Our logo is the ripple effect. I knew that if I shared my story, then someone would come to the stage to share their experience, and then another would come up to tell their tale. That is the magic of it. I don’t know that we can ever stop a culture of violence, but we can stop the culture of shame. All it takes is for one person to step up.

“After that night, it was like, OK, all of these people have gotten up and ripped the Band-Aid off, where are they supposed to go? All these people are finally breaking their silence and now they have nowhere to go. I struggled with that and knew we needed a space and some different kinds of healing. So many have done the traditional type of healing, the therapy, and are ‘therapied out,’ or have been re-victimized by their therapist. So they needed something different.”

Mindi decided to start a support group. She says she needed it for herself as much as for the other victims. She put an ad in the newspaper that generated a small support group, borrowing space from a local church and the local Boys and Girls Club, so there were two spaces for meetings.

“I just built on (my talk at the luncheon months earlier) and followed up with those people,” Mindi says. “I called and said, ‘Remember when you said you would help me? I need furniture.’ ‘I need money to get started’ or ‘I need help writing a contract.’ I just hit the ground running. It was seven to eight months into this and I had to put a board together. It all just started out of a passion.”

What evolved from that passion is a beautiful and peaceful set of rooms built into a warehouse in The Reserve commercial district. In 2012, The Inner Truth Project moved into its new space, which opens with a relaxing area furnished with comfortable chairs and sofas. There is also a large space for a table and chairs where the board meets, the art therapy students work on their healing and the writing therapy students express their truths. A separate, softly-lit room helps victims through trauma sensitive yoga, with instructors trained to work with survivors suffering from post-traumatic stress disorder or those who are victims of sexual trauma.

The space also includes a small room for one-on-one therapy sessions and a fully-furnished kitchen area kept stocked with food and drinks for those coming in for help.

“We got everything donated,” Mindi says of the kitchen area, “even our refrigerator and cabinets. We don’t work based on the victims’ socio-economic status. We do work with a lot of people who are in low-income situations. It is important that they are comfortable, so we always have plenty of food and drinks. If you are coming in for group therapy and talking about difficult things, you can’t sit there on an empty stomach. It is really important to me that when they come here, they can just walk in and take what they want, so that they feel comfortable here.”

The project’s space also includes a large room where they can show films or have speakers come in to provide lectures or workshops for the survivors. At other times, the room is used for outreach in the community to educate them about who survivors are and what sexual violence really is, Mindi adds, including that the program offers equine therapy in Palm City.

After listening to women in therapy talking about being drugged and sexually assaulted while enjoying a night out on the town, the group started the What’s on TAP program to help promote safe bars and safe drinks. The TAP (Train, Acknowledge and Protect) program seeks to assist against drug-facilitated sexual assault by training workers in local bars, law enforcement and members of the community on how to become effective bystanders and the realities, facts and information on drink spiking and consent.

For some of their activities, participants are asked for a donation, usually $5 to $20, says Mindi, although she adds that no one is ever turned away due to an inability to pay.

The Inner Truth receives some funds from United Way of St. Lucie County and the Children’s Services Council, but the funds are to be used for teenagers participating in the project’s programs. “There just isn’t much money out there to help adults who are victims,” Mindi says. The group also takes donations by mail or through PayPal on their website: www.innertruthproject.org or by calling 772-200-4599.

What’s the next step in the fight against sexual violence? Mindi stresses that the movement needs to move forward to include men in the discussion.

“With any movement there is a pendulum that swings way out to one side and then a backlash that pushes it all the way to the other side,” Mindi says. “We haven’t come to the middle yet. Sexual violence is not a women’s issue. I have been saying that forever. Mostly, men are the perpetrators, but it’s not all men. It is a small minority of men.

Age: 44
Lives in: Martin County
Occupation: Executive director, The Inner Truth Project
Family: Husband, Adam Fetterman; son, Noah Fetterman
Education: Bachelor’s degree in women’s studies, Florida Atlantic University
Hobbies: Attends music concerts and dabbles in playing the banjo; rows and is a member of a 24-person dragon boat team; attends film festivals
Who inspires you: “I have two women who are my mentors. One is in Palm Beach County, Mona Reis. She is a real trailblazer. She is so passionate about her work. She does everything with integrity and never waivers. The other one is Gloria Steinem. She came here once and I got to introduce her and hang out with her. She taught me that the issues are so grand that you are not going to fix them in one day; so pace yourself.”
Something most people don’t know about me: “I am actually an introvert. I am very private.”