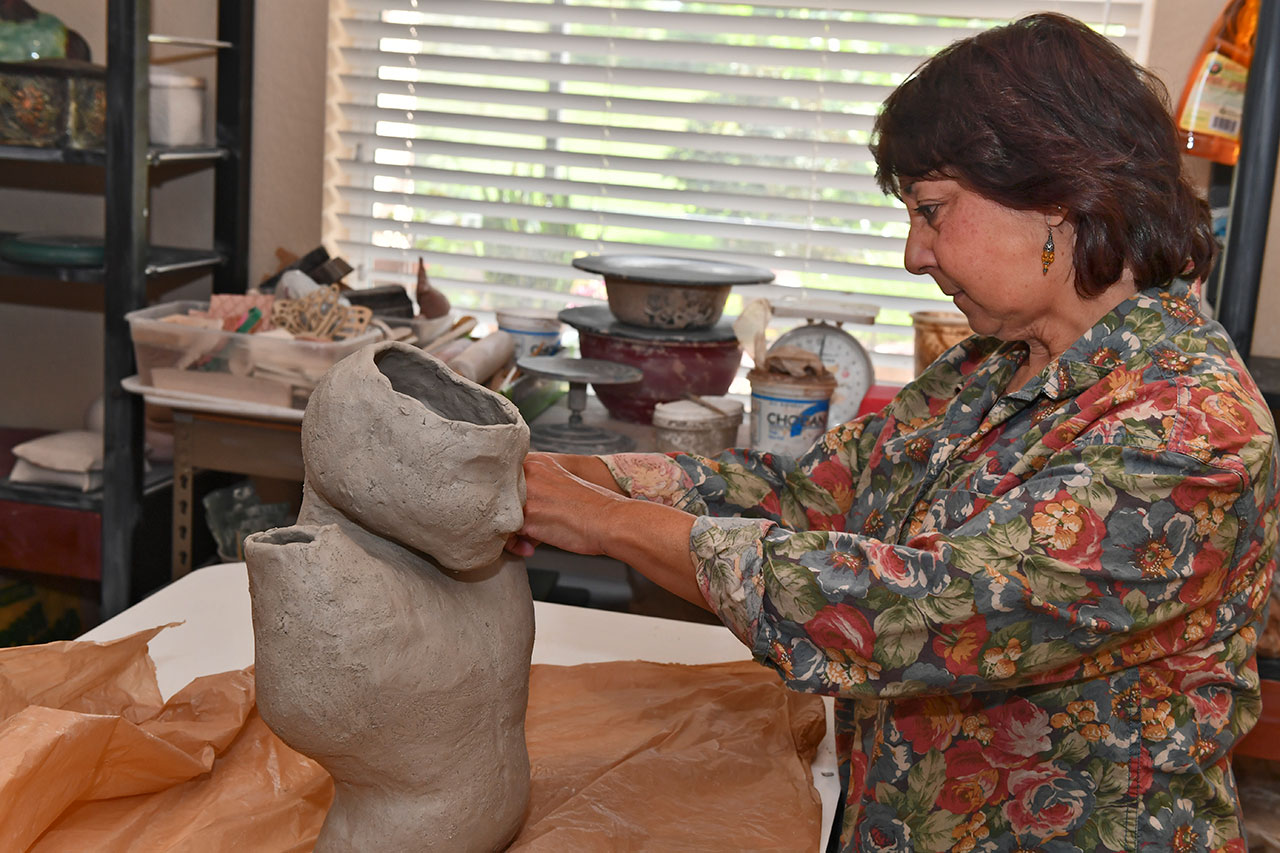 Lisa Lugo was busy throwing clay in October, creating 40 bowls for the 25th Anniversary 2017 Soup Bowl. The annual event, held in November, brought local potters together as they donated time and talent to raise thousands of dollars for the Samaritan Center in Indian River County. She also made one of the dozen soup tureens that was raffled off during the fundraiser.

That’s a lot of production for a petite artist in a small studio that isn’t much larger than the huge slab roller she brought with her from her New Jersey studio a few years ago.

She said she just couldn’t leave the 60-inch by 30-inch roller table behind when she and her husband, Angel, moved to Vero Beach in 2009. It had been on sale, after all. Who could resist?

“You know, same price on sale as a smaller one that was not on sale. Second of all, or first of all, however you want to think of it, I had a much bigger studio in New Jersey, a whole basement worth of space.” Bottom line, she said, “I was not leaving it behind.” On the plus side, when it isn’t being used to roll out clay, it doubles as a sturdy work table.

Lugo has her artistic hands in several mediums in addition to clay. The walls in her home are lined with her paintings, many inspired by nature. She keeps a painting studio on the second floor of her house but enjoyed painting with award-winning artist Ellen Fischer in her studio for several years.

“She is an amazing artist, teacher, and a true inspiration to strive for the best,” Lugo said.

She dabbles in acrylics from time to time but paints mainly in oils. Tubes of paint and an array of brushes, however, will never steal her heart.

“My favorite medium is clay, making sculptures,” Lugo said. “There’s something about hands in clay and 3-D that makes my heart sing.”

From all the pieces in any medium created in her studio, her favorite is a spirit rock.

“I personally love the organic, spontaneous free form of making the spirit rocks.” The one she picked as her all-time favorite seems to be destined to stay with her. “Though I have put it up for sale over the years in various shows, it’s never sold but it seems to get a good reaction wherever it is showing. People seem to gravitate toward it and need to touch it.” Seeing people’s reaction and their connection to her work is one of the reasons she loves clay so much, she said.

Many things can inspire a piece and that inspiration often dictates the medium Lugo chooses. She might make it a photograph, following in her photographer father’s footsteps, or turn to canvas and paint. Sometimes, it crosses over from one medium to another. “I have made koi fish out of clay, and I also love to paint them.” She’s done a series that combines both clay and paintings of koi.

Lugo’s creativity once got her into trouble, but it also worked to get her out of that trouble and into the role of teacher. She laughs at the story now but having to convince some firefighters that her neighborhood was not in danger of going up in flames made for some tense moments years back.

She explained that there’s more than one way to fire a clay piece. There’s a traditional kiln, but another method involves putting the raw piece into something like a metal garbage can, filling it with sawdust, and lowering the can into a pit in the ground to smolder all day or overnight. Late one evening back in New Jersey, Lugo’s husband noticed several fire trucks moving slowly through the neighborhood. He wondered if they might be looking for her.

“I said, ‘No, they’re not!’ I then realized the air was thick with smoke. That prompted him to go out and let the firemen know we had a sawdust firing in progress, since it seemed they were unable to locate the source of the smoke,” she said.

After she convinced the firefighters not to put out the fire, Lugo got a book from her studio to show them what she was doing. “Once they realized it was an art process, they were concerned about the piece breaking and the danger in using metal cans that can rust,” she said.

Luckily, she pointed out that she was firing in a new can and had a garden hose handy for wetting down the pit area. “As it turns out, there were no rules or laws broken,” she said. “Thank goodness, because the fine would have been $2,000, and yes, they were looking for me!”

Lugo is a member of Vero Beach Art Club and Cultural Council of Indian River County, two organizations that offer opportunities to show and sell her work. In the past, Lugo has exhibited in local galleries but now shows her sculpture and paintings exclusively on the CCIRC web site and on her Facebook page. Her works will be on display in the Light Show at Flametree Clay Art Gallery in December and Art by the Sea at Vero Beach Museum of Art in January 2018.

Family: Husband — Angel, yes he is one. No children, and no pets at this point in time. Carmen Lugo - mother in law. We all moved down together but she has her own home here in Vero.

Who/what inspires me: “It may be a typical response for an artist, but nature always inspires me. How can it not? In the people category: Dalai Lama and Gandhi.”

Something most people don’t know about me: “To me, a good spiritual life is very important … they probably don’t know that I meditate daily. It isn’t something I talk about much. Only because a spiritual practice is very personal.”