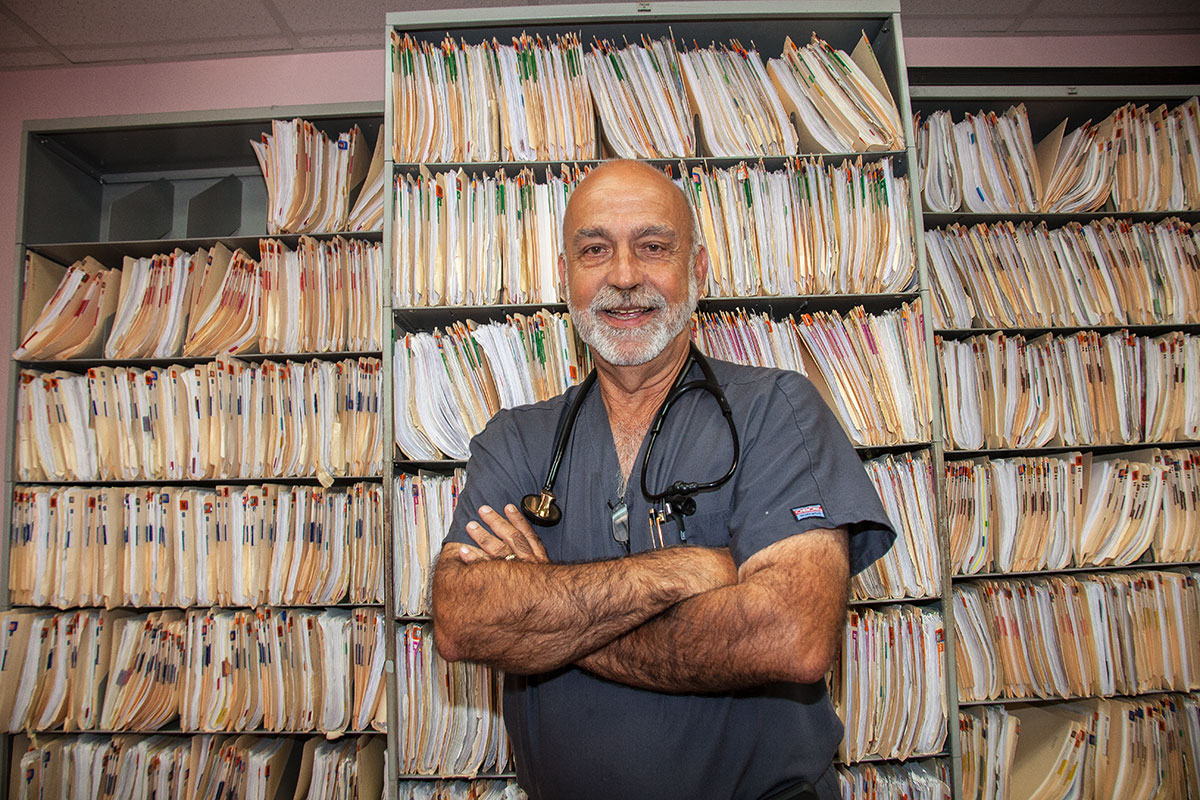 One of the longest serving family doctors in Vero Beach, Leo Mandina has hand-written records of the more than 22,000 patients he has seen during his career. GREG GARDNER PHOTO

As a boy in Cuba, Leonardo Mandina admired his grandfather’s horses. Little did he know after fleeing the communist rule of Fidel Castro in 1961, he would become a world-renowned breeder of magnificent Andalusian horses and the old-school family doctor for generations of Vero Beach residents.

A successful shop owner in Havana, Mandina’s father wanted no part of communist Cuba and he put the family on a plane to Miami with little more than the clothes on their backs. They were allowed to take a suitcase with no more than 77 pounds of clothes. “We arrived with nothing,” said Mandina, who was 8 when he left Cuba. “My mother and father worked in a factory. I worked all through high school and college. I never got a handout.”

After the University of Miami and medical school in Spain, Mandina completed his residency in Indiana. He knew he wanted to come back to Florida and after offers from all over the state, Indian River Medical Center hired him as its emergency room doctor.

“The ER job gave me an opportunity to look at Vero Beach,” he said. “I thought Vero was a nice, quiet, little town. The ER was fast-paced and it could get busy.”

e remembered the night a boat with several teenagers slammed into a bridge. It was not a good outcome, he said. Another time, a man walked right into the emergency room carrying his son who was not breathing and handed him to Mandina. The boy had died.

After that busy first year, Mandina opened his family practice, which has had 22,000 patients over the years. He still keeps records by hand, instead of the government-mandated digital files. Medical files line the walls behind the reception desk.

“I still draw the blood from patients 95 percent of the time because it gives me more time with them,” Mandina said. “I try to be human with my patients. You have to give the patient attention and you have to have close contact with their eyes. We are losing that while doctors look at screens.

“I don’t have electronic records. If you think your medical records are private, you are kidding yourself. If I was 30 years old, I would embrace it, but I am comfortable with what I am doing. We have become mechanical like an assembly line. Patients don’t like it and they feel they are not getting the attention they need. Sometimes we can help them feel better without taking out the prescription pad.

“It is a rushed world, but you have to give the patient a chance to air what is wrong,” he continued. “I spend time with them and by getting to know the patients, I like to develop a relationship with them. Many of my patients have become my friends. The nonmedical part of it is the most difficult, dealing with Medicare, insurance and paperwork.”

Mandina is one of many Vero Beach doctors offering a concierge service. For an annual fee, the patient can call his cell phone 24 hours a day. People usually don’t call at 2 a.m. when it can wait until morning, he said. Also part of the service, Mandina will go to the hospital as soon as he can once a patient has been admitted. He also develops an even closer relationship with the concierge patients.

While he is known for his ability to diagnose human illnesses, Mandina has become a bit of a veterinarian, breeding more than 100 Andalusian horses on the 10-acre Hacienda del Sol (ranch of the sun) farm west of Vero Beach. He credits wife, Maria, who also emigrated from Cuba, with running their 18-stall operation. Each stall has a video camera and when mares are about to give birth, they are monitored from the main house so the couple can run out and check on them as a parent would for a child.

“Birthing is an amazing sight when the mare delivers and then raising the colt,” Mandina said. “But my wife is the breeder. My wife and I always liked horses. I love the breeding aspect. Our black stallion is best sire of the breed and is well-known in Spain.”

Because of some back issues, he doesn’t ride much, but Mandina does all of the stable grunt work and then some.

When daughter Maria said she wanted to have a horse, her father bought 10 acres of land and built the horse farm. She became quite a rider and the family bred show horses for competitions around the state. Today, Maria is a veterinarian and younger sister Christina is a psychologist. Both married this year. Asked if growing up in a doctor’s house influenced their career paths, Mandina said without hesitation, “Absolutely, without a doubt.”

Both daughters were basketball stars, but they never had the chance to play on the same team when they were younger. However, while studying in Spain, they played for the University of Navarra. “I had to go see them because I had never seen them play together on the same team,” Mandina said.

Howard Avril coached the Mandina sisters from fifth to eighth grades at St. Helen’s Catholic School in Vero Beach and later at John Carroll. He has been a family friend for 20 years. Avril brings Mandina toy turtles, saying he should raise live turtles instead of horses.

“Leo has the reputation of being one of the best diagnosticians in Indian River County, but those darn horses,” Avril said. “I keep telling him to raise turtles. These horses have taken half of their lives. With Leo, everything has to be done all the way. He and his wife do everything to take care of the horses. For him, it is his practice, his wife and his horses. I keep telling him to play golf or something.”

Despite having family in Cuba, Mandina has not been back to Cuba since he left 56 years ago.

“I will never go back as long as his (Castro’s) regime is in power,” he said. “They are murderers and I don’t agree with President Obama’s decision to open up Cuba. My parents were deeply anti-communist and so am I.”

What inspires me: “My religion, my faith, my family.”

Something most people don’t know about me: “I coached basketball at John Carroll High School in Fort Pierce and my daughters broke all the team records. It was enjoyable.”