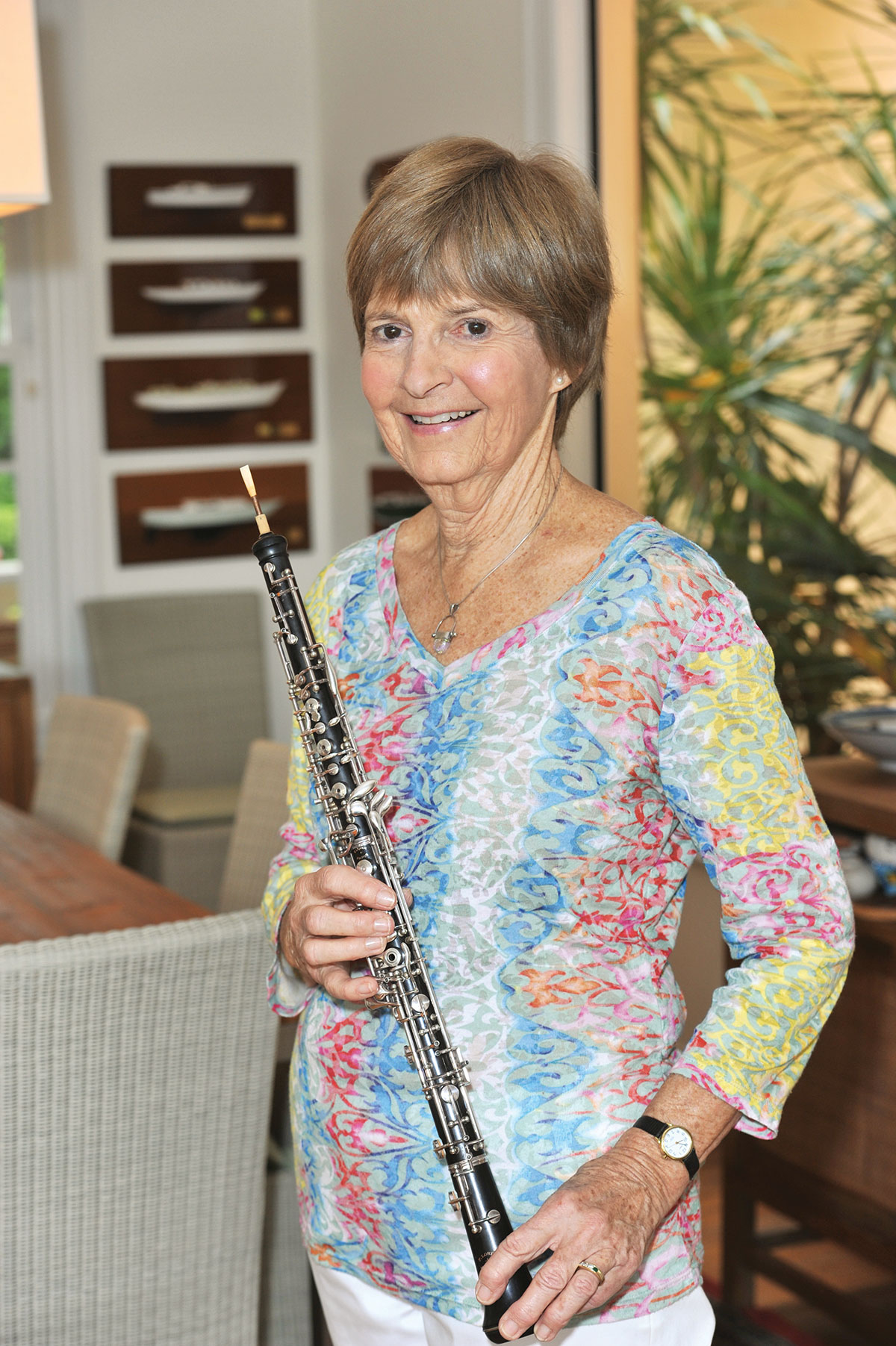 Debbie Pillorgé, who returned to music after a long hiatus, plays the oboe every afternoon and piano in the morning. | PHOTO BY ED DRONDOSKI

After several decades raising her family, working as a special needs teacher and then sailing the Caribbean with her husband, Debbie Pillorgé has returned to two childhood pursuits: playing the oboe and the piano.

Now 75, Pillorgé was 5 when her parents gave her an old upright piano and started her on lessons. Her teacher was the old-fashioned type who used a ruler across the knuckles to correct errors. It worked both ways. Once, Pillorgé became so frustrated by the scale she was trying to play that she kicked the piano’s trim and broke it off.

But for the most part, she loved playing everything from Czerny exercises to pieces by Chopin and Gershwin, as well as pop tunes of the era. She was, and still is, a morning person, so she started her days working at the keyboard while her parents and siblings continued to slumber. She was barely out of kindergarten when she tried her hand at composing and playing for appreciative but undemonstrative audiences.

“I composed for my cats and my pet goldfish,” said Pillorgé, who lives in Vero Beach. “I had a whole bunch of baby dolls, so I’d line them up on the sofa and play for them.”

Her parents obviously recognized her talent, because when she was about 9 they bought her a 1941 Steinway baby grand piano, which she still owns and plays at least an hour every morning.

Pillorgé took up the oboe when she was a young teen and had her eye on joining the high school band and orchestra. Her first teacher, Josef Marx, played oboe with the New York Metropolitan Opera and was an authority on baroque through contemporary music. She says he gave her a solid grounding in the instrument.

As a young wife and mother in Baltimore, Pillorgé organized a small chamber music group, The Baroque Mamas. She says the audience members reclined in infant seats when their mothers rehearsed, and her husband George supplied champagne for the adult guests at their performances. She also played with the Johns Hopkins Symphony Orchestra.

She stopped playing oboe for three decades, due to the demands of raising a family and teaching children with special needs. Also, when George retired as an architect, the couple spent nine years cruising the Caribbean on their sailboat. Pillorgé studied for the FCC license and became a ham radio operator, “for fun and our own safety at sea,” she says.

When they gave up their cruising life and settled in Oxford, Md., on the state’s Eastern Shore, Pillorgé dusted off her oboe and gave it a try. It turned out to be “mechanically needy,” she said, so George bought her a nearly new French-made oboe, “and I found my second wind.”

She also found a second teacher, Kelly Willingham, retired principal oboist with the U.S. Army Field Band, who patiently helped resurrect the abilities of this “eager but rather old oboe person.” Pillorgé has continued to take lessons from him by Skype since the Pillorgés became year-round residents of Vero Beach five years ago.

One of the challenges facing any older woodwinds player is maintaining stamina and breath control. Pillorgé stays physically fit by swimming every morning, working out at a gym three times a week, kayaking and walking. She is a disciplined musician who rarely misses a day of practice.

For seven years she played with the Melbourne Community Orchestra. Now she’s part of the Vero Beach Chamber Orchestra and a recently organized quintet, The Tropical Winds, that has played at Christ by the Sea United Methodist Church. She’s in demand as an oboist, and gives credit to church musicians Ryan Kasten, Jason Hobratschk and Marcos Flores for their support and for sharing their expertise with her.

She’s also resumed piano lessons after a long hiatus, and is studying with Flores, music director at Christ by the Sea, who definitely does not use the ruler-across-the-knuckles approach to teaching. She said he has helped her a great deal.

“Marcos has certainly given me the joy of playing for people again,” she said, “and not to think about the individual notes as much as the big picture the composer is trying to get across.”

The same goes for the oboe.

“I try to concentrate on listening to the music coming out of the oboe and not worry so much about each individual note,” she said.

“To play music is a joy,” she said. “I love to see folks enjoying what they’re hearing. I love to make that connection with people. It’s great having someone ask to see my oboe after a performance. Nice to know you’ve reached out and gotten through somehow!”

Where I live: Vero Beach

Family: Husband George, artist and retired architect; handicapped son Marc, “who has always loved music and is a very appreciative audience;” daughters, Nicole, an architect and artist, and Michele, a physical therapist; five granddaughters ages 7 to 13, Camille, Vivienne, Lucille, Brigitte and Yvette, all of whom play a musical instrument.

What I am proudest of: “My family, of course!”

Something most people don’t know about me: “The emotional release that playing music brings.”