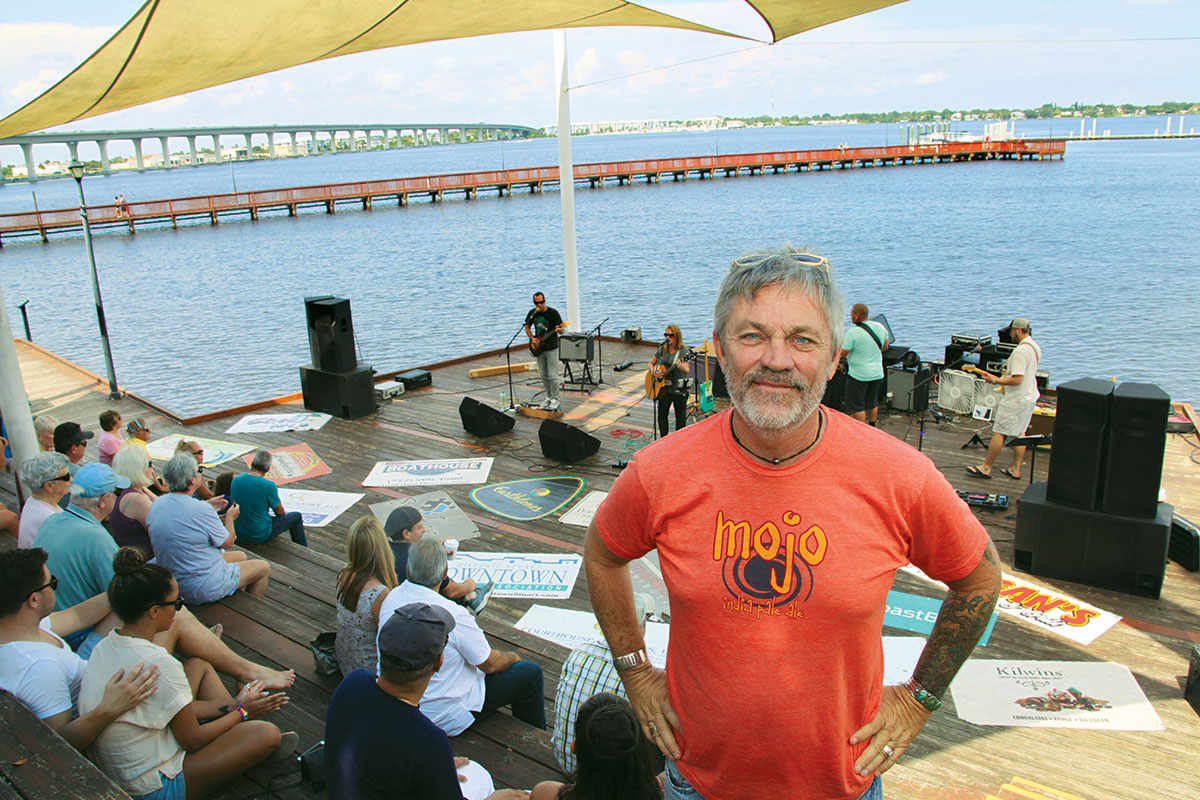 After introducing the band Revelry at Stuart’s Rockin’ Riverwalk music event in downtown Stuart, promoter Ron Hart is off to check on his three businesses, music venues Birdseye and Terra Fermata, and the 1960s throwback shop Earthtones.

Ron Hart is using his entrepreneurial skills as a former nurseryman and landscaper to grow the live music scene in Stuart.

Between the outdoor venue Terra Fermata and the indoor music club Birdseye, bands play almost every day of the week, with locals often opening for traveling acts. Since 2001, Hart has been a driving force in the downtown Stuart music scene sponsoring music at his eclectic, alternative shop Earthtones on Osceola Street. Perhaps his best work for downtown Stuart was founding the Sunday afternoon Riverwalk Jazz Sunday series seven years ago, which later morphed into Rockin’ Riverwalk. He has also been in the mix for Stuart’s annual Dancin’ in the Streets event. Between the free concert and the farmers’ market people are shopping downtown on Sundays or just plain enjoying music on the St. Lucie River.

“Rockin’ Riverwalk is my baby, my brainchild,” says Hart, who enjoys introducing the band each week on the Riverwalk stage next to Stuart City Hall. “I am the organizer, emcee, booking agent and chief volunteer. I like to support our local music. I collect the checks, but we could not do this without the dozen business sponsors.”

‘THE BANDS FIND ME’

Hart zips around Stuart on his Rasta-colored scooter between Terra Fermata, just south of Confusion Corner, Earthtones and Birdseye, a 200-seat music room with an elevated stage, located at the north end of the Roosevelt Bridge. During a recent interview, Hart had to take a few moments for important phone calls, including booking a band.

“It was wild luck, complete happenstance,” says Hart. “I was not looking to open a venue. It was presented to me and I acted on impulse. Terra Fermata makes money when it’s not raining. In the beginning, I did a lot of it (deals) instinctively. And I found out my methods were in line with industry standards. The bands find me. I have embraced this since it happened to me.”

Terra Fermata has been open three years and all kinds of acts have taken the outdoor stage, including a recent performance by Rock and Roll Hall of Famer Leon Russell. Florida’s volatile weather can be a problem for outdoor venues, but Hart has already moved one show from Terra Fermata to Birdseye to avoid incoming inclement weather — a perfect plan B. Birdseye also has no issues with live music until 2 a.m., while Terra Fermata currently must end live music by 9 p.m. on weeknights and 10 p.m. on weekends.

The City of Stuart is considering an ad hoc committee’s recommendations to redefine its sound ordinance. The live music community — players and fans — is hoping city commissioners will change the hours to 10 p.m. on weekdays and 11 p.m. on weekends. “I play by the rules,” says Hart. “I am reasonably certain the Stuart City Commission will pass a noise ordinance that will be good for the town.”

Like many downtown business owners, Hart is worried about the impact of noisy All Aboard Florida passenger trains rolling through Stuart. “It is going to have a lot of impact on the recent surge in the notoriety of Stuart,” he says. “The train will change the dynamics of how the town works. It will force us to roll with the impact on the town and its businesses.”

‘RON IS AN ASSET’

John Loesser is artistic director at Stuart’s Lyric Theatre and has known Hart since he opened Earthtones. “He is very smart and very entrepreneurial,” says Loesser. “He recognizes what is important for the community and live entertainment. Ron is an asset to our community and artists on their way up.”

“I first met Ron Hart when he hired Boss Groove to perform at Earthtones in Stuart,” says musician Thomas Hoffelder. “We were one of the first bands, if not the first band to perform. Ron immediately saw the potential of live bands in downtown Stuart. The Ashley and The Jolly Sailor were gone and so were all those great weekends of having live music in the heart of downtown Stuart. Those live sessions at Earthtones had to be the inspiration for Terra Fermata. When I decided to put a new band together called Quick Fix, I knew that to get to the next level of notoriety we had to be good enough to catch the ear of Ron Hart.

“After a long courtship, and word of mouth from some of his regulars, Quick Fix was finally given a chance to perform on the Rockin’ Riverwalk Stage. Quick Fix was then invited to play at the Birdseye for a couple of dates. This smoke-free concert venue has become one of our favorite places to perform. Quick Fix has also had invitations for benefits and corporate events through Ron. Organizations know that Ron Hart has his finger on the pulse of the current music scene and they contact him to find bands.”

Since the show must go on, every Tuesday is open mic night at Birdseye, named for a musical symbol that designates the note should be held longer. To encourage passing of the rock ’n’ roll torch, the kids play first so they can get home early on a school night. Hart envisions Birdseye as a blues club “with occasional divergence in the musical palette.” The former biker bar was “in a very debilitated state. It had not been cleaned in a long, long time.” Hart says he spent tens of thousands of dollars to build the club.

In his past life, Hart operated Landscapes by Hart and Hart Transplants in the nursery business. He opens up Terra Fermata for benefits several times a year and frequently donates merchandise from Earthtones for charity silent auctions.

“Having too much fun” is the hardest part of what he does, says Hart. “It is a lot of work having too much fun,” he says. “I am an early bird and I have a late night business now so I get five to six hours of sleep, tops.”

“He (Hart) is a great guy and very generous with his time,” says musician Jim Chrulski, Stuart director of community services and a longtime friend. “He has a huge heart and he is committed to bringing cultural arts to the city of Stuart,” says Chrulski. “He is one of the most diverse, well-rounded musicians I know. He can play in the pocket (in rhythm to tempo).”

Self-taught, Hart has been playing the guitar since he was 11. “I play a little bit of a lot of things — drums, mandolin, acoustic and electric guitar, bass, stand-up bass, harmonica, and I sing. I think of myself as a performer,” he says. “I surround myself with talented people. My friends, associates and employees are the key to getting this done. I have high hopes for both Terra Fermata and Birdseye.”

“Ron has integrated himself as the go-to guy for specific music genres,” says Chrulski. “He had the foresight to create another space for musical styles that need that kind of venue. He dropped the pebble and now we are seeing the ripple.”

Background: Operated a landscape contracting business and a wholesale nursery before opening Earthtones in Stuart in 2001.

What inspires me: “Music and its universal language. It is healing and peaceful and it brings people together.”

Something most people don’t know about me: “I am a songwriter and musician. I write a lot of music.”