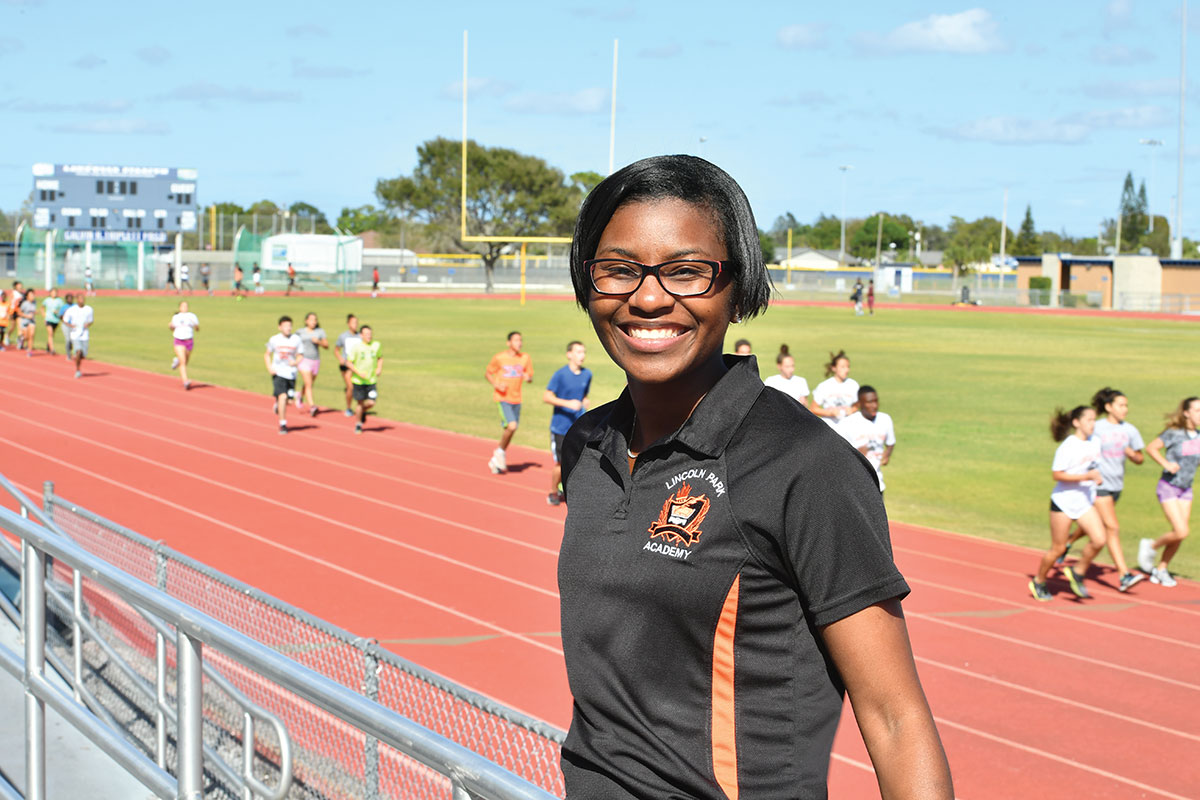 During the school day, Makeda-Ione Brome teaches math at Lincoln Park Academy but after school she coaches the school’s track and cross-country teams. ED DRONDOSKI PHOTO

What do you get when you take one high school math teacher, add chairing the school’s math department, coaching cross-country in the fall and track and field in the spring, and doing research for a University of Florida fellowship? One extremely busy finalist for St. Lucie County’s Teacher of the Year award.

Makeda-Ione Brome, who has been with St. Lucie County public schools for seven years, started studying for her teaching degree at Indian River State College after working part- time as a math tutor.

“I was majoring in physics at IRSC and was hired to tutor students in the Student Support Services area,” she says. “I worked for Betty Talley, the former program director, tutoring math for low-income, first-generation college students.

“I saw the gap between those who seemed to have come out of high school with a good math foundation and those who didn’t,” Brome explains. “I thought I could help close that gap and make it fair for everyone, so they are not trying to catch up in college.”

The older daughter of a career military man, Brome grew up on military bases in Louisiana, New Jersey and California. When her father retired from the Air Force, the family moved to Florida. Brome began her freshman year as a physics major at IRSC. She had considered a career in engineering, but her part-time tutoring job led her in a different direction. She switched majors after realizing that math is critical for students who plan to attend college and because she excelled in it.

As part of her degree requirements, Brome did her student teaching at Lincoln Park Academy, a highly rated academic school for students in grades 6th through 12th. It is also home to the county’s International Baccalaureate Diploma program.

She loves teaching and readily accepts the challenge of the students who come in saying they can’t do math.

“I just tell them to give me a chance,” she says, “and they do. Next thing you know they are doing math, explaining math. It’s something they never thought they could do.”

During her teaching career, Brome has received the Distinguished Minority Educator Award twice, in 2010 and 2012. And this year, she is LPA’s Teacher of the Year nominee. She recently received word during a surprise visit to her classroom by LPA Principal Henry Sanabria, schools Superintendent Wayne Gent, school board members and LPA administrative staff that she is one of three finalists for the award.

In announcing her nomination on the school’s webpage, Sanabria wrote: “Ms. Brome’s selection reflects her commitment to creating an environment that is conducive to learning for all students. It is also a true testament of her hard work and dedication, not only as a classroom teacher, but as a teacher-leader.”

On Feb. 15, Brome traveled to Tallahassee to receive an Excellence in Education award. She was nominated for this honor by students and her peers. Brome was one of three Florida educators to receive this award along with a $1,500 check from Gov. Rick and Ann Scott during the 2017 Black History Month reception at the Governor’s Mansion.

Brome’s work with students extends far beyond the classroom but still involves numbers. She is one of three coaches, joining Veryl Moore and Wendell Adams, who train the track and field team after school.

“I ran track in high school,” Brome says. “I fell in love with cross-country running after high school.

“We share the coaching abilities according to our strengths. I help with the middle-distance runners (400 meters and 800 meters) and the jumps. I did the high jump and long jump in high school and ran the 400 and the 800.”

And, as if this is not enough to keep her busy, Brome also is involved with the Florida Teacher Leader Fellowship program through the University of Florida and the Bill Gates Foundation. There are 40 teachers from around the state participating in the fellowship. Brome has traveled to New Orleans, Boston and Minneapolis this school year as part of the fellowship. She is researching self-reflection in the classroom, which she thinks is a good way to give students time to look back on their work. She will present her research at an international teacher’s convention in Miami later this year.

Teaching runs in the family. Brome’s mother, Patricia Thorpe, is a teacher at Bayshore Elementary School in Port St. Lucie. Her mother, she explains, was a business major, but took the additional education classes necessary for a teaching certificate.

Her younger sister, Dominique Cesar, teaches math at the middle-school level at LPA. Her sister was a marketing major, she says, but decided after marrying to become certified to teach. When asked how it was to be her sister’s department chairman, Brome laughs and says it is great to work with her because “We have always gotten along very well.”

Background: Father was career military, and the family lived on various Air Force bases around the country. When her father retired, the family moved to Florida.

How I got into teaching: “I was hired to tutor students as a part-time job at IRSC and decided I wanted to help students learn math.”

What I like best about teaching: “I like it best when the light bulbs go off, when they get it and when they realize they get it.”

Something my students probably don’t know about me: “I am terrified of speaking in front of people.”