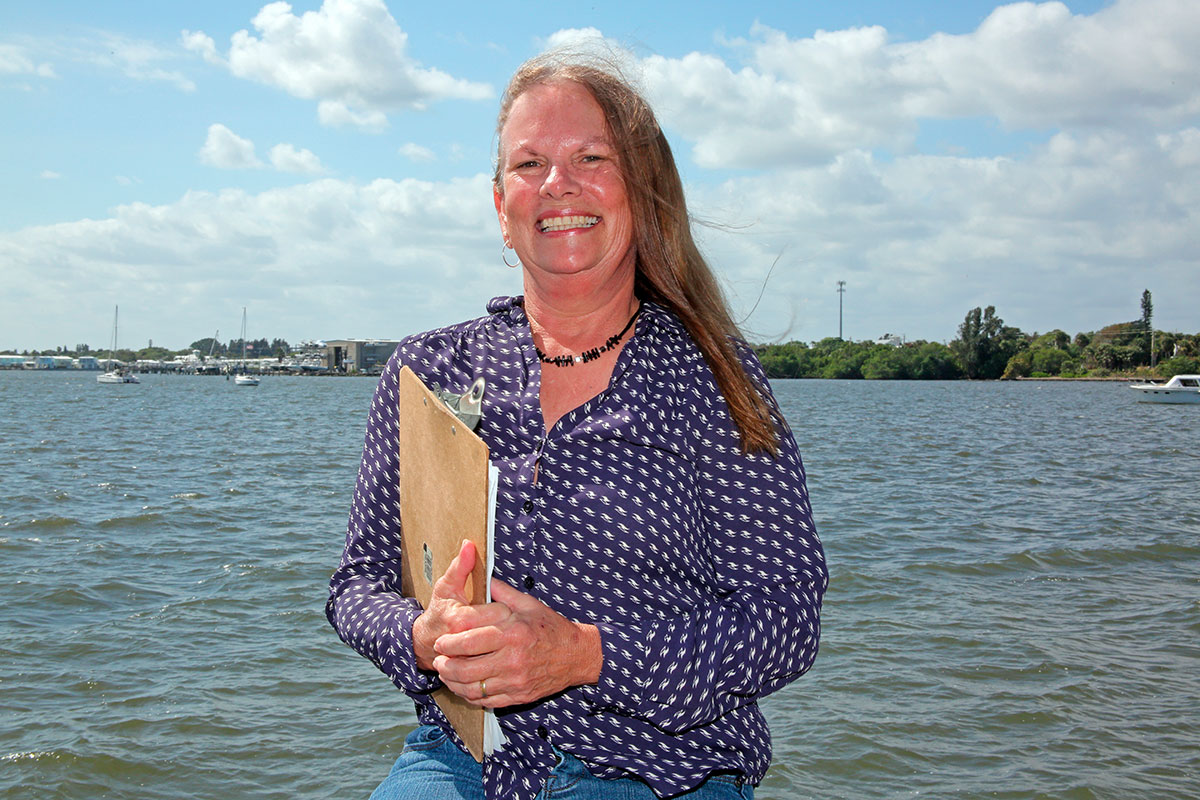 When she is not running her public relations business, April Price organizes and supervises a variety of marine events on the Treasure Coast. GREG GARDNER

Like father like daughter, April Price is a second-generation advocate for marine interests in Florida. She helps with the improvement and preservation of the waterways in the tri-county area.

A Treasure Coast resident since 1984, Price followed in the footsteps of her late father, Joe Schabo, a mover and shaker in Broward County before he moved to Fort Pierce, writing opinion columns for the Fort Pierce News Tribune, now the St. Lucie Tribune.

Schabo was also instrumental in bringing the New York Yankees to Fort Lauderdale for spring training. He first dubbed Fort Lauderdale the Venice of America. Through her father’s political campaigns and work to promote marine industries, Price led a charmed life as a teenager with opportunities to work at boat shows, go to Yankees games and use four season tickets to the Miami Dolphins. Price saw every Dolphins’ home game in 1972 on the way to NFL football’s only perfect 17-0 undefeated season.

For her fifth birthday, Price got to meet the Yankees, including Roger Maris, who promised to hit her a home run on his second at bat into center field, pointing in that direction. In his second plate appearance, Maris drilled a home run on the third pitch right where he said he would.

Price says she was named for the month the baseball season begins and loves baseball to this day. “I’ll go see a game anywhere,” she says. For seven years she had season tickets for the New York Mets spring training games.

When Price married husband Tim and had two daughters, the couple realized they could not afford to live in the Broward neighborhoods where the good schools were.

“It was a good decision because education is most important, and I am glad we came here,” Price says. “I have been able to be a working mom with control over my schedule. We always ate dinner as a family usually after homework was finished. Family time was always important.”

Both of her daughters are graduates of Lincoln Park Academy and Florida State University.

In 1984, they moved to St. Lucie County, where Price worked in banking for 10 years before joining her husband for 13 years at Southern Yacht Service, specializing in Detroit Diesel engine repair and service.

Always on the water, the family has taken boat trips to Atlantic City, N.J., twice annually for a decade, numerous trips to the Bahamas and voyages on most of Florida’s waterways.

Price credits her career path to her father, who she worked for on political campaigns and in marine promotions.

“I typed and stuffed envelopes and am a self-taught typist,” she says. “My father was a professional writer and he would correct the teacher’s comments on my homework and send it back to the teacher. He was very satirical and I kept all of his absentee notes. They were hilarious. My and my sister’s lives were captured in his newspaper columns.”

With fingers in all kinds of pies, Price has been event coordinator for eight years of the Port Salerno Seafood Festival, co-founder of the annual Martin County Lionfish Round-up, and executive director of the Sea-Life Habitat Improvement project to fund artificial reefs. She also served as a governor appointee to both the Atlantic States Marine Fisheries Commission and the Florida Boating Advisory Council. Price represents the Marine Industries Association of the Treasure Coast on the St. Lucie Economic Development Council and the Treasure Coast Sports Commission.

These days, Price operates her public relations firm and organizes and executes several large-scale events on the Treasure Coast with her daughters and husband acting as lieutenants.

“For me it is about the people and the issues,” she says. “I can be more influential behind the scenes. Adrenalin fuels me in the five days leading up to an event when I don’t get any sleep. I make good decisions and I thrive under pressure. It energizes me.”

Age: 60
Lives in: Port St. Lucie
Occupation: Public relations and community event planner
Family: Husband, Tim; daughters, Sandy, 38; Valerie, 36; grandsons, Jase, 4; Cody, 3 months; granddaughters, Marilee, 1; Summer, 2
Education: South Plantation High School, Broward County “school of hard knocks;” numerous certifications and coursework
Hobbies: Fishing, boating, gardening, family time and baseball
Who/What inspires me: “My dad because of his sense of commitment to his family and any projects he represented.”
Something people don’t know about me: “I had a successful career for 10 years in banking and I am a stained glass artist.”