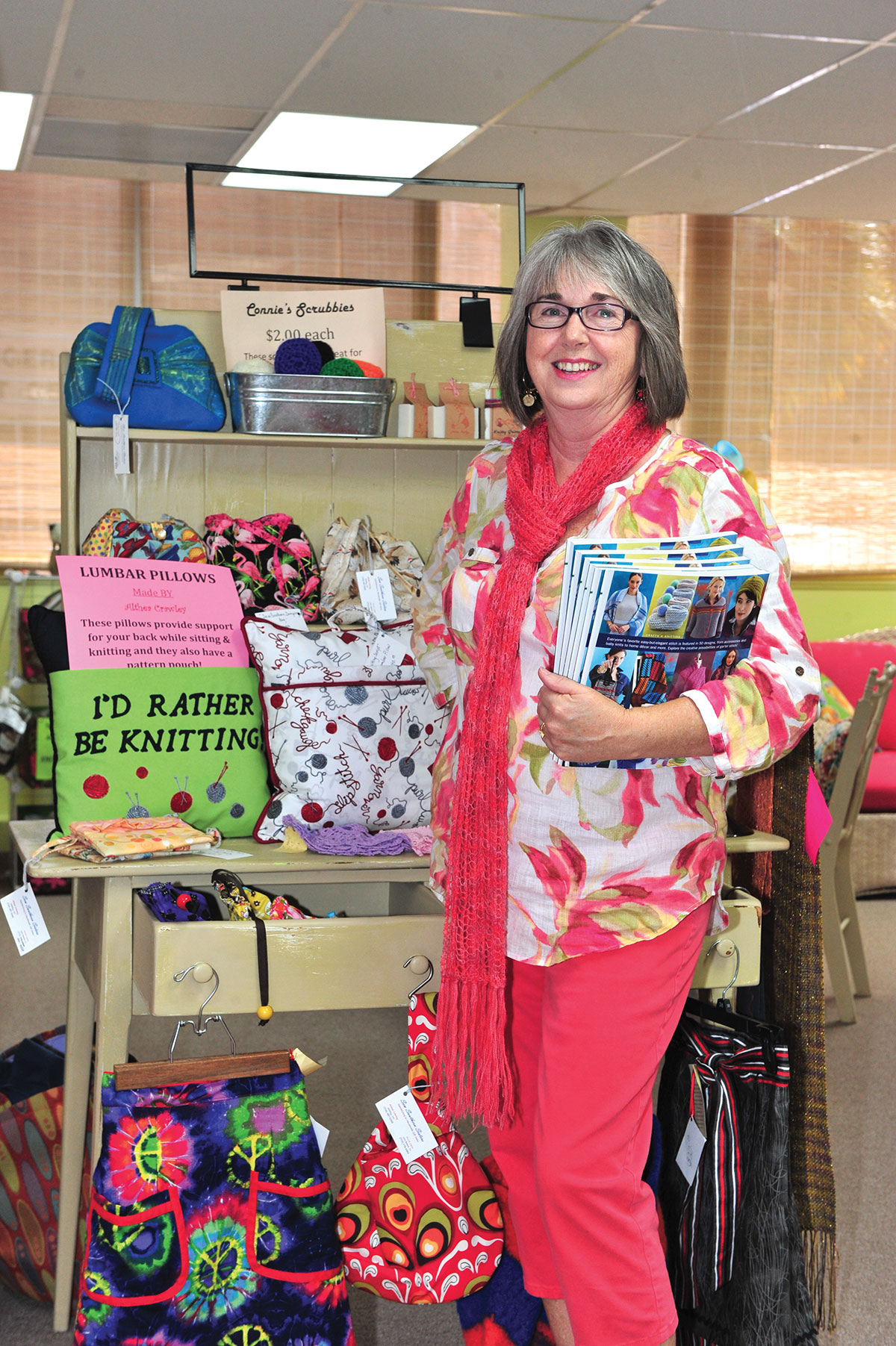 Soon after Anna Gales’ husband, Terry, retired in 2010, he wanted a home office for projects. Short on space, he had to share his wife’s office, which she used for her favorite hobby, knitting. But the quarters were cramped and their daughter, Amanda, suggested her mother rent a studio, something she was already thinking about. Together, they found a 200-square-foot space on Miracle Mile in Vero Beach. “We called it the Itty Bitty Knitty Gritty,” says Gales with a smile.

The studio was perfect for Gales, who found it peaceful and a nice reprieve from her intense job as a social worker. She did not plan on selling anything she made, but Amanda encouraged her to, and then her husband suggested she carry some yarn. No one expected that it would quickly evolve into a thriving business that required ever-growing square footage. “I wanted my own space and then it just sort of snowballed,” says Gales.

In some ways, though, this was not a new venture for Gales, but continuing something she began more than 50 years ago. She first took up knitting in the fourth grade, when one of her fellow students taught her during recess. She also had another formidable teacher, her mother, who not only helped with knitting but taught her how to crochet.

Gales’ love of knitting and crocheting inspired a love for the arts in general, and when she went to college she earned her bachelor’s degree in art education. Upon graduating, she taught arts and crafts as art therapy to adults in an outpatient day treatment center for mental illness in Asheboro, N.C. “Art, being creative, is very therapeutic,” says Gales.

But after a few years she gave up teaching and became a full-time social worker for people with a dual diagnosis of mental illness and developmental disability. “I left art as there were no art teaching positions open and I loved the work I was doing in mental health,” she says.

With such a busy schedule, some things fell by the wayside, including knitting. But she resumed her favorite hobby when she and her family moved to Florida from North Carolina in 2001, finding it a relaxing way to unwind from her busy job as a support coordinator with the state Agency for Persons with Disabilities in Indian River, St. Lucie and Martin counties. “I know, it’s a strange choice for this climate, and I thought ‘who knits in Florida — it’s too hot.’ But I was returning to my first love, and it felt great.”

Nine years later, in 2010, when Gales opened the Itty Knitty Bitty Gritty with the support of her family, she never expected that other women would want to knit in the hot weather as well. “But women started coming out of the woodwork,” she says. “Most people who are really into the craft will knit because they love to knit. It’s sort of an addictive craft.”

Business was so good, so fast, that it was an easy decision to expand to an 800-square-foot space just a few months later. Her husband, who started managing the finances, began traveling all over the Southeast looking for yarn. The couple kept focusing on reinvesting their earnings in buying more yarn, and eventually even their new store became too small. “We packed as much yarn as we could, and there was not enough space for customers.”

Three years later, in March of this year, she and Terry moved the not-so itty bitty Knitty Gritty into a 2,400-square-foot store at 1561 Old Dixie Highway. The increased space not only houses more yarn, but has a teaching table and a comfortable knitting corner.

“A lot of women like to knit together. It brings a sense of community,” she says.

It’s also physically therapeutic. “I had a lady who had chemotherapy and knitting helps because of the repetitive motion, and because every pattern is different and keeps you stimulated.”

Throughout the year, Gales offers many different classes that are listed on her website, knittygrittyverobeach.com. In addition, she hosts a myriad of social happenings, including a Sunday Social and a Thursday night happy hour. “People can bring wine or whatever. It’s very popular,” she says.

In addition, Gales is committed to giving back to the community. To that end, the Knitty Gritty is sponsoring a charitable group that knits prosthetic breasts for women with mastectomies, aptly called Knitted Knockers. For her, this ongoing project is an extension of all the work she’s done so far in her life. “I’ve always considered the work I do a ministry, whether teaching, social work or running a yarn shop. Knitting knockers is a tangible example of that,” she says.

Hobbies: I love to go scalloping on the west coast of Florida.

Something people don’t know about me: I play a great “air fiddle.”