The joy of cooking

As a food writer, I am regularly asked about restaurants, recipes and chefs. But the most oft-asked question has to be, “Whatever happened to Ian Greenwood?”

Chef extraordinaire and renowned owner of a dozen Florida restaurants, Greenwood raised the bar in dining excellence, drawing on flavors from around the globe for his inspiration. In 2010, he hung up his toque and headed to Mexico.

I finally caught up with him in the small 16th-century village of Ajijic, [Ah-hee-heek], where charming cobblestoned streets lined with brightly colored storefronts echo with the clip-clop of horses’ hooves. It’s a place where past and present live amicably side-by-side and mañana is a way of life.

The neighborhood where Greenwood chose to build his home sits high in the Sierra Madre Mountains overlooking Ajijic and the sparkling waters of Lake Chapala, the largest lake in Mexico.

Conveniently located less than an hour from Guadalajara Airport, a half-day drive to the Pacific coast and close to the birthplace of tequila, the stunning views, soft breezes and ambient year-round temperatures attract an eclectic potpourri of year-round expats.

PERFECT RETIREMENT PLACE
Greenwood says he loves the laid-back lifestyle and the people.

“The Mexicans don’t have a great deal, but they manage to be happy with the life they have,” he remarks. “I originally thought I’d retire to the Caribbean, but I’d been to Mexico a lot and decided it had to be near the water and mountains and have a good wine, a grocery store and a fishmonger.”

As we sit chatting on his terrace, a sweet rescue pup, Izzy, and a cat named Sweet Pea circle our feet. He says the cat was abandoned when a storefront shuttered its business, so he scooped her up and brought her home. Relaxed, good-natured and cordial, Greenwood’s demeanor seems like a far cry from his reputation for running a tight ship.

“In business, I was strict,” he admits, “But I was always fair.”

Born in northern England in the industrial town of Rochdale, he shares his culinary journey.

“I got a place in a good catering college in Manchester and there was a little French restaurant in town that had an excellent Italian chef who’d worked in Paris. I got my part-time experience with him, and I really enjoyed the physicality,” he says.

Spending the next five years gaining valuable kitchen experience while attending college, he confesses, “Working with great chefs just sort of grounded me.”

At 21, he expanded his horizons, spending three years working in Bermuda before moving stateside in 1973. Summers in country clubs around Chicago and winters in Miami became foundational to his education.

“I got lucky in Miami,” he says. “I worked at a famous restaurant in Coconut Grove called Kaleidoscope, and then became head chef at Food Among the Flowers, a very trendy bistro in the Designer District. Miami was open to something new so there was less butter and heavy creams and more broth-based sauces. I started doing Modern Florida cuisine — things like lobster stew and more innovative fish dishes. Then, later on I spent more time doing Caribbean influences in my cooking.”

Catering the Super Bowl in Miami in 1979 and the Winter Olympics at Lake Placid earned him much-deserved recognition and, in the latter part of 1980, he opened his first restaurant.

“It was in Coral Gables, and I called it The Painted Bird after the book by [Polish/American novelist] Jerzy Kosinski,” he explains. “After opening, I had $247 left in my bank account. Luckily, the purveyors gave me 15-day credit, and I had the support of so many people in the restaurant business, that it got me through the first few weeks. I wouldn’t have been successful if I hadn’t had that following. Within a year, I got great offers to sell and because I was thinking of starting a family, we moved up to Cocoa [village] where I opened the Black Tulip.”

FRIENDLY SUGGESTION
His transition from the Space Coast to the Treasure Coast came about when a good friend came calling.

“By then I had opened the Black Swan in Indian Harbor Beach and Bobby McCarthy from Bobby’s in Vero came in and said, ‘Vero’s just dying for a restaurant like this.’ So, I went to Vero and bought the Black Pearl on State Road A1A.”

I ask him if being a restaurateur was as easy as he made it seem, and he laughs, recounting an evening when the restaurant was fully booked.

“We’d been open about three months, and it got to 7:30 and the 6 o’clock people are all still sitting there. I’m giving away glasses of wine to the people waiting and now it’s dark and I can’t get rid of these people. So I walk into the kitchen and tell the cooks I’m going to turn off the power. I tell them their electronic pilot lights are going to go out and all the flashing fire lights are going to come on.”

Laughing at the memory, he recalls flipping the breaker. “Suddenly the place goes dark and pretty soon we had an empty dining room,” he chuckles.

In 1993, he shifted his focus to a series of island-themed restaurants: Pearl’s Bistro on Royal Palm Point was where seafood became the canvas for aromatic seasonings from the Caribbean — cumin, nutmeg, allspice and smoked paprika.

Dishes like jerk-spiced grouper with crab cakes and curry hollandaise or Rasta Pasta made with coconut milk — a Jamaican spin on an Italian mainstay, saw each plate ablaze with color and flavor. Along the same lines came Ian’s Tropical Grill in Fort Pierce, and Café Caribe on U.S.1, a departure for Greenwood at 200 seats and a late-night bar.

“I wanted to see if I could do something a bit different,” he explains.

As each restaurant swiftly became a neighborhood anchor, Greenwood would find a buyer and move on.

“I liked to sell the restaurants after a couple of years,” he says. “I call it the two-year itch. I’ve made money, and there’s always someone who wants to buy a restaurant with a good reputation.”

DIDN’T MESS WITH SUCCESS
He shrugs off the notion that he possessed a magic formula.

“I always had a head chef so when it came time to sell, it came with [someone] who knew how to run it. If they didn’t mess with it, and they kept the consistency, there was a good chance it would last for years,” he says, citing the Islands Fish Grill in Indialantic, a restaurant he started in 1998.

With four decades of successes firmly tucked beneath his belt, he toyed with different ideas, including buying land in Oregon and planting a vineyard.

“But first, you have to be a farmer,” he muses. “And I don’t think I have the patience.” Other plans evaporated as retirement beckoned. “I thought I’d quit while I was ahead. I was getting close to 60, I’m in good shape and I had the money to retire. Many don’t get out at the right time.”

Nevertheless, cooking is still his passion.

“About eight years ago, I was getting a little antsy when Jen [his wife of 16 years] suggested teaching classes like I used to do in Vero. So now I do three classes a month, pick a menu and Jen sends it out to a mailing list of 300-400 people.”

STILL IN THE KITCHEN
His custom-designed kitchen accommodates seating for 12 and attendees watch as he delivers a master class in a chosen cuisine. Offering everything from British to Indian to Mexican, today he is perfecting dishes from Asia.

He often returns to Vero Beach to visit veteran chef and longtime friend Bruce Turner of The Tides restaurant to whom he wholeheartedly attributes his success on the Treasure Coast. Coming back also serves as a reminder of his lasting legacy.

“I was driving by a cute little restaurant on the Intracoastal in Melbourne and saw Onion Crusted Grouper advertised on their marquee,” he says. “Then there was a barbecue place on U.S.1 in Vero and it was on their marquee, too.”

Alluding to one of his most popular signature dishes, he says it took some time to perfect.

“I had the idea and tried it with real onions, but even when we battered them and got them crisp, they burned, and we couldn’t get them to stick.

Then, I’m in Publix around Christmas, and I see these dried onions like you put on green bean casserole and wondered if they would work. And they did.”

Then, his eyes twinkle and he bursts out laughing. “They should put onion crusted grouper on my tombstone!”

Today, he sets his own schedule focusing on activities he loves. Hiking and playing chess provide relaxation, while Jennifer enjoys tennis and practicing yoga. And, as the cat settles around the trunk of a potted palm, I ask if he was ever tempted to do another restaurant.

“Yes,” he says. “In fact, I was looking at a couple of little premises. But not now, I’m too old and too smart.” 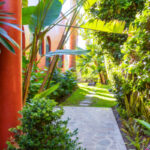 A pathway at the front entrance leads to an herb garden and a sunlit oasis of fruit trees. 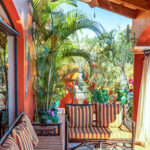 Greenwood designed his home with plenty of outdoor living space. Shaded seating on the terrace provides a welcome respite from the noontime sun. 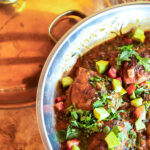 Renowned Treasure Coast Chef Ian Greenwood may have moved to Mexico, but he hasn’t lost his passion for conjuring up new dishes. 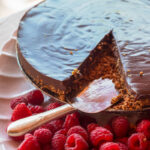 Chocolate Ganache Torte: Impress your guests with this rich, decadent dessert that is surprisingly easy to make.
Please follow and like us: