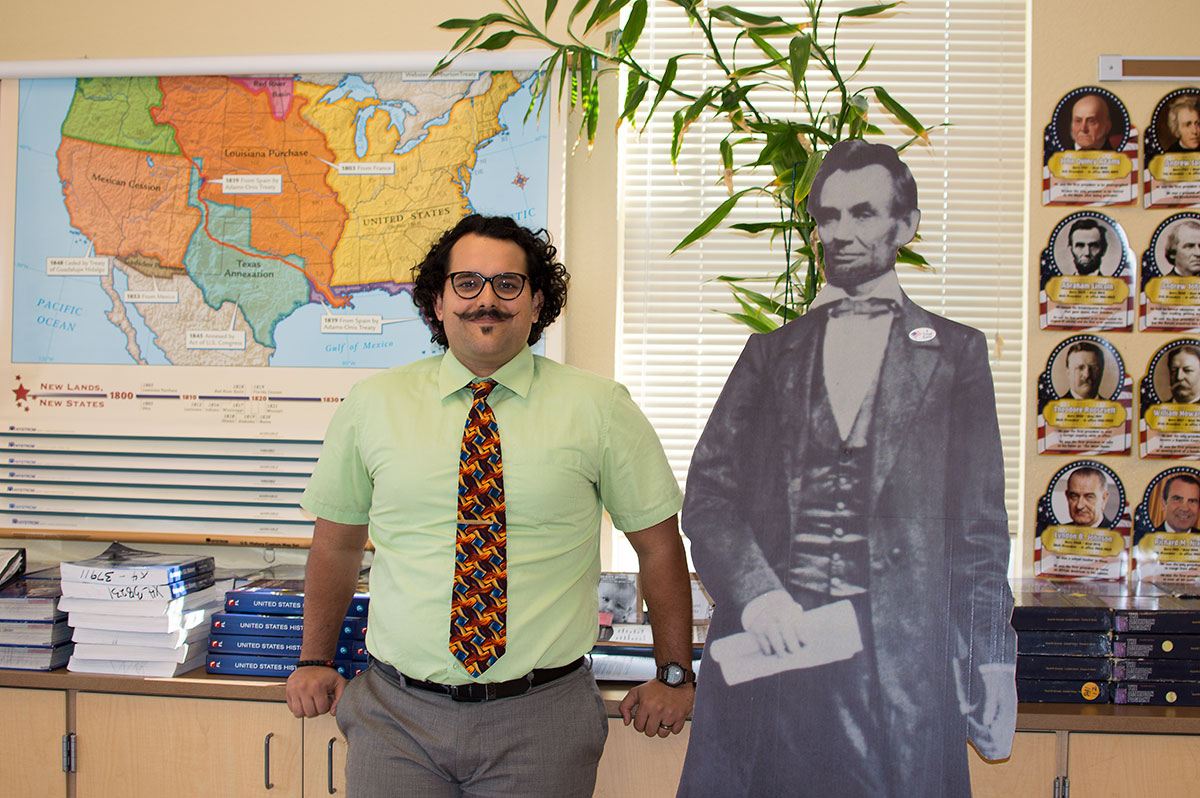 Bradley’s family moved from Stuart to southwestern Port St. Lucie after he had completed middle school. High school choices weren’t available back then and Bradley was scheduled to attend Fort Pierce Central High School, then located on Edwards Road.

“We lived way out in the Becker Road area,” Bradley said. “There was nothing out there. The school bus picked us up at 5 a.m. I lettered in three sports: football, soccer and tennis. I was academically inclined and played soccer for a few years in college.”

Returning to Fort Pierce, he finished his degrees at Indian River State College and went to work for the Marriott hotel chain. When he began to think about leaving the corporate world, he remembered that as a child he thought how interesting teachers were.

“I decided that if I was going to do this (switch careers), I would need to see what teaching was all about. So, I signed up to be a substitute teacher,” Bradley said.

After completing a few classes and examinations, Bradley began teaching 10th- and 11th-grade students at Central. He teaches several levels of U.S. history. The regular and honors students study the period from the Civil War until the end of the Cold War era (1990s), which is dictated by Florida Sunshine State Standards. His AP (Advanced Placement) level covers from 1491 (the year before Columbus landed in the New World) until present day. This coverage of material is guided by the College Board Standards and is needed so students will do well on their AP exams.

“We do all kinds of things in class,” Bradley said while sitting in his classroom filled with props and artwork from all periods of American history.

“We use debates. We use technology – Kahoot! – which is a way to query students online. They log onto the website with their phones and answer the question. I also do lectures, but my teaching focuses on the students teaching themselves.

“I facilitate the discussion and they make the learning happen. It’s a very active classroom.”

Bradley organizes a few off-campus activities for his students. In 2017, he had 15 students attend the Treasure Coast History Festival in downtown Fort Pierce. This year, 37 students joined him for the event.

“We proceed down to the farmer’s market where I interview my friend, Brenda Gibbons, about her organic farming. I tie this into the early settlement of our country. I also interview the market manager about the availability of locally grown produce,” he said.

His inside connection at the Lyric Theatre, wife Kia, who is the theater’s executive director, led to his students attending a show at the theater in downtown Stuart. It was A Conversation with Kat Imhoff, who is the president and curator of Montpelier, President James Madison’s estate. The show discusses the American Revolutionary War and the writing of the U.S. Constitution.

“I had a talk with the students about how to dress to go to the theater and how to act at the theater,” Bradley said. “I was amazed when 45 students showed up. Some of the young men were wearing three-piece suits, but all were in shirts and ties. The girls wore heels and nice dresses. In fact, one of the women in attendance asked me if my students could talk to her husband about how to dress for the theater,” he added, with a chuckle.

Those students who attended were each given a book and a laminated envelope containing a Madison stamp and a photo of a painting depicting the signing of the Constitution in 1787.

A subject leader (U.S. history) at Central, Bradley is also the school’s only AP history teacher. He is also a teacher-leader, explaining that there is at least one in each school. Teacher-leaders, he said, help teachers who need any type of assistance. This group meets at the school board office occasionally in order to further its skills.

And to think that all of this came about because of a change of careers from the corporate world to education. A fortuitous meeting with his high school athletic director, Jay Stewart, while he was substitute teaching at Central led him to an interview with the principal, Terry Smith, and within months, Bradley said, he was in the classroom teaching.

“The beauty of teaching,” Bradley said, “is you have to adjust. It’s like that Mike Tyson quote: ‘Everyone has a plan ‘till they get punched in the mouth.’ ”

Background: Grew up in the Stuart area; moved to St. Lucie County at the end of middle school; graduated from Fort Pierce Central High School, where he lettered in multiple sports. He worked for Marriott Corp. before starting his teaching career.

How I got into teaching: “I decided to switch to teaching and thought I should start out as a substitute. I ran into my high school athletic director, Jay Stewart, who told me to come back to Central the next day. I did and was introduced to the principal, Mr. Smith. Within a matter of months, I was in the classroom.”

What I like best about teaching: “The opportunity to provide knowledge to students as an effort for them to fulfill their potential.”