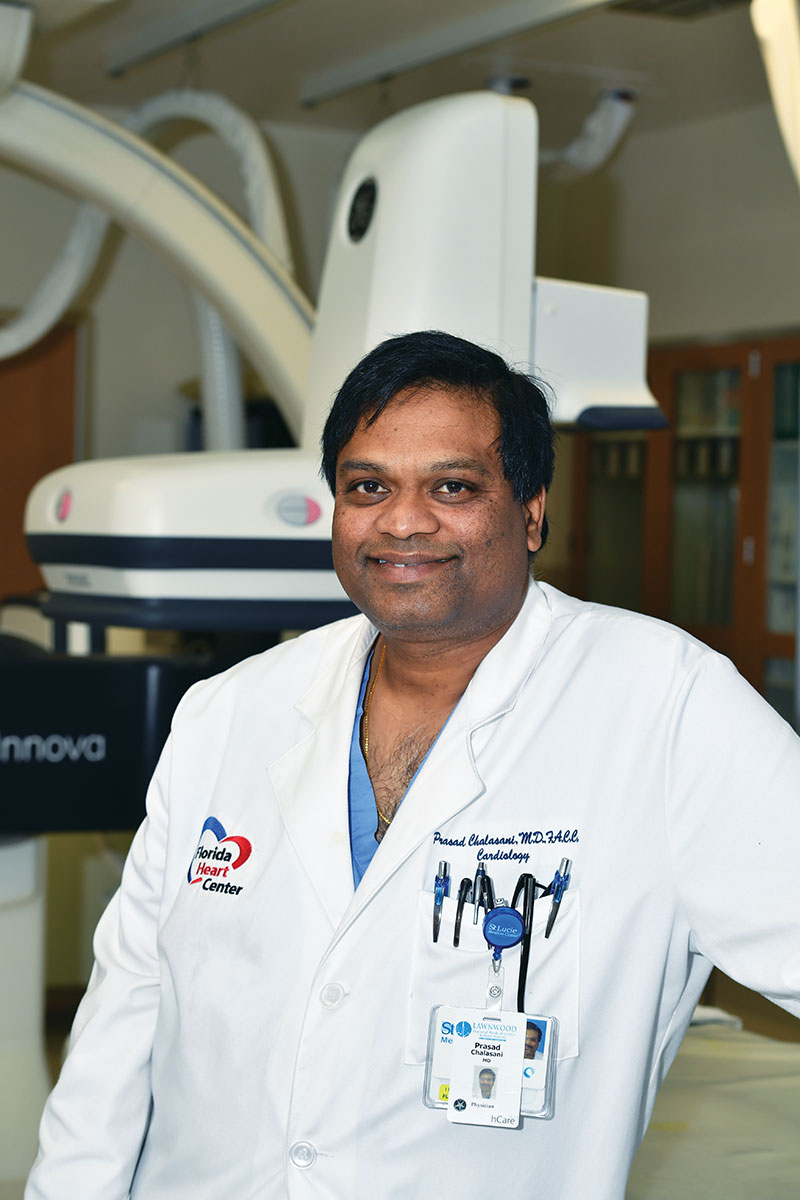 Dr. Prasad Chalasani, interventional cardiologist at The Heart Institute at Lawnwood Regional Medical Center, and the valve team introduced a new aortic valve replacement method to the Treasure Coast in April, and have since performed 17 of the minimally invasive surgeries. ED DRONDOSKI PHOTO

Some Treasure Coast residents who need heart valve replacement, but are considered too sick to undergo open heart surgery, have found relief in a procedure inaugurated at The Heart Institute at Lawnwood Regional Medical Center in Fort Pierce.

Interventional cardiologist Dr. Prasad Chalasani and a team at Lawnwood can replace a diseased aortic valve with a healthy one by inserting a catheter into the patient’s leg and, using a tube with a balloon on the end, directing an artificial valve to the heart. The new valve, made of animal tissue, remains compressed inside the balloon until it reaches its destination, when fluid causes the balloon to expand and push the new valve into place.

The procedure, known as transcatheter aortic valve replacement, or TAVR, is much less invasive than open heart surgery , since it requires only a small incision in the leg. Chalasani, who has performed 17 of the procedures since April, said patients typically have a shorter hospital stay and quicker recovery time, with less pain. The surgery generally takes an 1 1/2 to two hours, he said.

All of the patients came to him with symptoms of heart failure, which include chest pain, fatigue, shortness of breath, dizziness, fainting and swollen ankles and feet. Chalasani said one man was so weak he could barely walk across a room without seeming to lose his breath.

“Many of the patients are leading active lives now,” he said. “Some are playing golf.”

One woman, age 84, “could barely walk from here to there” before the surgery, he said. Her life was so improved afterward that she returned to the hospital bearing a fruit basket to thank the team for “giving her a second chance at life,” he said.

Alvin Jerinsky, a 73-year-old retired quality assurance manager who lives in Port St. Lucie, said he was in bad shape when he went to see Chalasani earlier this year. He had triple-bypass surgery 10 years ago and said his heart was operating at less than 20 percent capacity. The surgical team performed valve replacement on him June 2

He said he walks, exercises at the gym, goes fishing and even travels some. All were activities he had to curtail before the surgery.

Chalasani was born in southeastern India, where his father was an engineer for the federal government before he died of a heart attack at the age of 49. His mother was a housewife. He earned a bachelor’s degree in medicine and surgery from Andhra University in India in 1987, and received seven additional years of academic training in internal medicine, cardiology and interventional cardiology at the Emory University School of Medicine in Atlanta.

He is president of the Florida Heart Center in Fort Pierce and is board certified in interventional cardiology, nuclear cardiology, cardiovascular disease and internal medicine.

He works 14-hour days and is on call at the hospital every third weekend. Shelley Kennedy, a registered nurse for 21 years, works on the team as valve coordinator. It’s her job to organize the doctors.

“He’s the most dedicated physician I’ve ever seen in my life,” she said. “He’s all about the patients.”

He’s also dedicated to the education of young people, including his own. When his children were growing up, he would come home from work to help them with their homework every night from 7 until 9. Then he returned to the hospital, often not finishing until midnight.

As chairman of the Hindu Temple in Fort Pierce, a faculty member at Florida State University’s medical school branch at Indian River State College and an active community volunteer, Chalasani helps needy children get academic counseling and internships. He knows what education helped him achieve and wants to help others become successful, too.

“That’s why I’m most passionate about education,” he said. “Taking care of patients is my job.”

He’s been working with State Rep. Larry Lee, D-Fort Pierce, and others who are working to enhance the Lincoln Park neighborhood with the “Restoring the Village” campaign.

“Our passion is to improve community life, to give everybody the chance to achieve to their fullest potential,” Chalasani said.

Education: Bachelor’s degree in medicine and surgery from Andhra University in India in 1987; seven additional years of academic training in internal medicine, cardiology and interventional cardiology at the Emory University School of Medicine in Atlanta.

What inspires me: “I’m most passionate about education.”