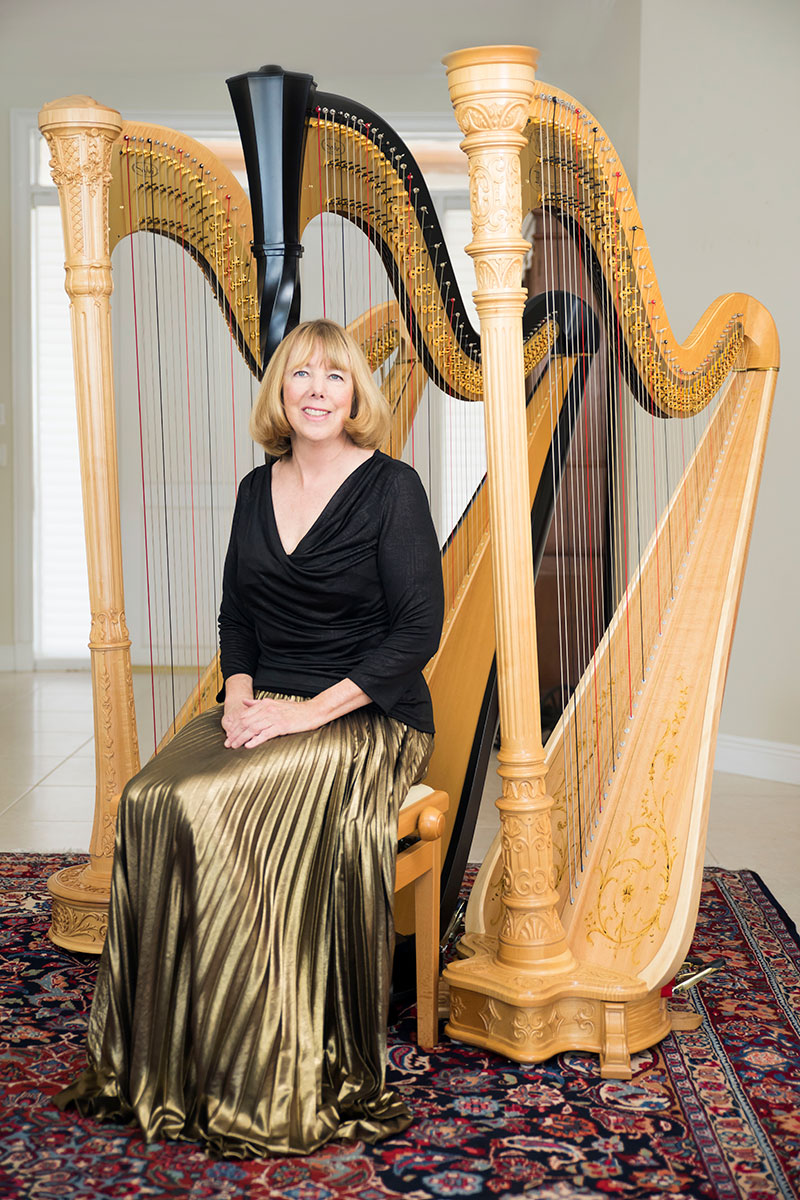 Harpist Gretchen Cover of Vero Beach began her professional music career after many years as a journalist and as an operations director for a fundraising company. BRANDEE ANTHONY PHOTO

Former journalist Gretchen Cover of Vero Beach found her calling when she resumed playing the harp after a hiatus of several decades.

Now the owner of three harps and a Kia van in which she transports them to performance venues, Cover is in demand to play in concerts and at two local churches, Christ by the Sea United Methodist and First Presbyterian. And last year, she and classical guitarist Miguel Bonachea recorded and released a CD, “Sketchbook of a Journey,” playing original music by composer Anthony Sidney. The album has aired multiple times on Classic 24, the syndicated program produced by Minnesota Public Radio and carried locally by WQCS, 88.9 FM.

Born at Wright-Patterson Air Force Base in Ohio, Cover was the daughter of one of the original “right stuff” test pilots.

“My father was also an early pioneer in the space program, so we lived in the D.C. - Annapolis area for the first 11 years,”
she said.

The family moved to Brevard County in 1965 when her father was assigned to Patrick Air Force Base. After graduating from Satellite Beach High School in 1970, Cover enrolled at the University of Florida in Gainesville, where she majored in journalism. She had taken seven years of piano lessons while growing up.

“As a journalism major, you’re required to have a minor and in talking to my boyfriend at the time, he mentioned that he wanted to take harp lessons,” she said. “That rang a bell with me so I found out who the harp teacher was at UF and knocked on her door and said I want to take harp lessons. The next thing you know, I had signed up for harp lessons twice a week.”

After graduation, she spent one unsatisfying year working for the Daytona Beach News Journal before moving to Washington, where she wrote for the legal publications Commerce Clearing House and The Daily Bond Buyer/American Banker. She also did some freelance work and was active in Washington Independent Writers.

She found time to play a smaller harp, called a troubadour harp, at various sites in the D.C. area. Then in the mid-1970s, her father brought her a concert grand harp from Italy. The company, Alina, was just beginning to introduce the instrument in the U.S., and had a two-year waiting list for buyers. The company was showing its wares in Alexandria, Va.

“I talked my dad into buying one, which was like buying a BMW if you’re a 22-year-old kid,” Cover said.

For three years, she took harp lessons at the Peabody Institute, a music conservatory affiliated with Johns Hopkins University in Baltimore, but later put the harp aside due to the demands of job and family. After journalism, she worked as operations director for her husband’s fundraising consulting business, The Sheridan Group.

The family moved to Vero Beach in 1999 when telecommuting made it possible for Cover to work from home. Her parents, now deceased, still lived in Brevard County. She and her husband, Nelson, preferred the lower population density of Indian River County.

“We also wanted to be close to my parents’ orbit, but not too close,” Cover said.

In Vero Beach, Cover continued to work for Sheridan and also did volunteer work for Hibiscus Children’s Center. Then, about a half-dozen years ago, concert pianist Marcos Flores, director of worship arts at Christ by the Sea United Methodist Church, got wind about someone in town who owned a harp.

“He collects musicians like some people collect stamps,” Cover said. “He started nagging me to play.”

At first, she was so reluctant to perform that she hired another harpist to play for the church’s Christmas and Easter cantatas. Then, for her 60th birthday, she bought a concert grand harp from Italy and started to perform.

She has had no shortage of invitations to play, especially at Christmas time.

“Christmas was so busy, I left a harp at both churches and used the semigrand, also known as the little harp, at home to practice,” she said.

She has no idea why she is so passionate about the harp.

“I must have a death wish,” she said with a laugh.

“The black and white piano keys are exactly the same, but a concert grand harp has 47 strings that each vary in diameter and length,” she said. “Each string must be tuned every time you play. The piano stays in one place, but you balance the harp on two small feet and it moves with your body, sometimes resting between your knees or on your right shoulder, depending on how and what you are playing.”

Cover practices at least two hours a day, often more, and she plans ahead. In January, she was already thinking about music for next Christmas. Twice weekly yoga sessions help keep her shoulders and back strong. Clearly, she is a serious-minded perfectionist, a trait she says she inherited from her parents.

“My parents taught us to put our best effort into everything we did,” she said.

They owned a Bosendorfer 225 semiconcert grand piano that they played every day. Cover had the instrument rebuilt by specialists with Atlantic Music in Melbourne after she inherited it. Now, pianists, accompanists and students play it for recitals, parties and fundraising events that the Covers host at their home.

But the harp, which has been known since antiquity, remains Cover’s instrument of choice, with a couple of concessions to modernity. She has two websites, www.veroharp.com and www.veroduomusic.com. And, after an awkward moment in which two pages of music stuck together while she was playing, she put all of her music on an iPad.

She hasn’t used sheet music in more than four years, and doesn’t miss it.

Education: Satellite Beach High School, 1970, and University of Florida, 1974, with a bachelor’s degree in journalism with a minor in applied harp.

What inspires me: “The adventure of pursuit and accomplishing my goal.”

What people don’t know about me: “l was a business and finance newspaper reporter in Washington, D.C., with an expertise in municipal finance and the former Glass-Steagall Act. I also enjoy any water sport.”