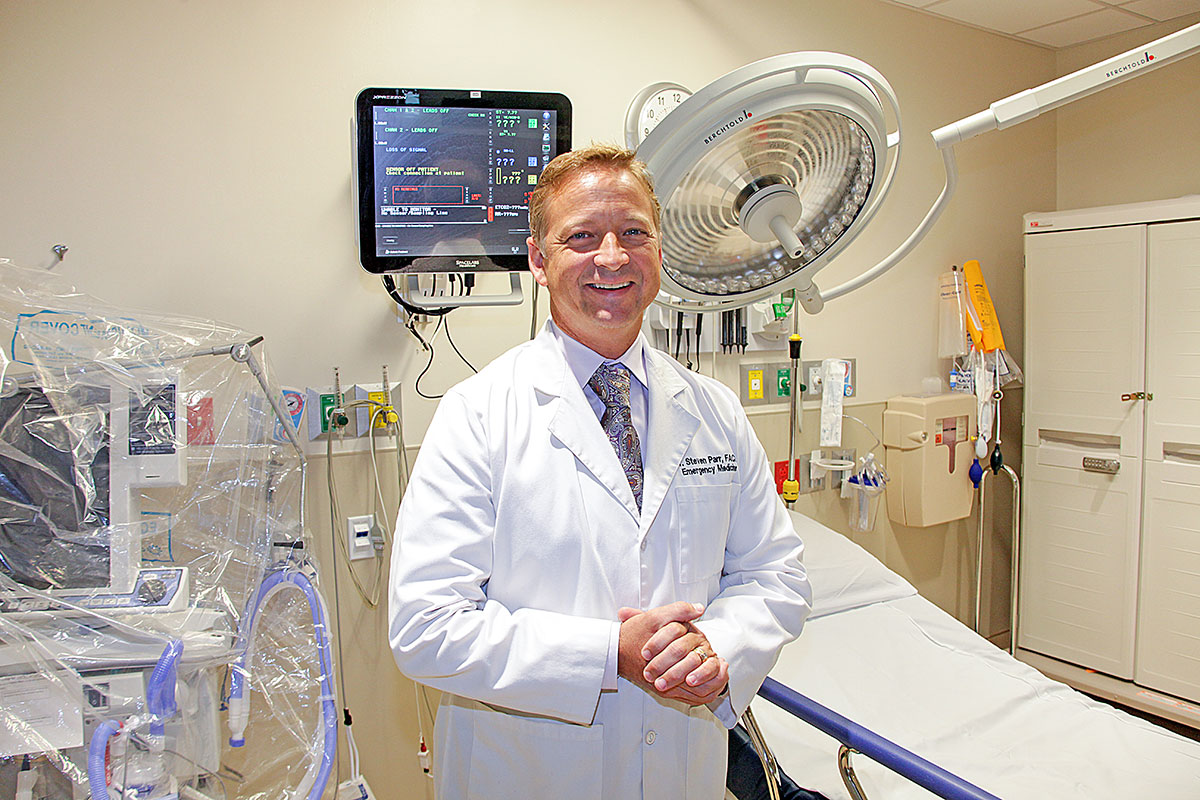 Steven Parr stands at the ready in a crash room at Tradition Medical Center. Parr sees thousands of patients a year as the emergency medicine director at the four ERs operated by Martin Health System. GREG GARDNER PHOTO

When he is not supervising one of four very busy emergency rooms for Martin Health System or raising his children, Steven Parr lives for the competition of extreme sports.

While he makes life-and-death decisions daily in the emergency room, Parr is just as comfortable going down a death defying, rocky cliff on a mountain bike or freediving to spear big fish. He loves to surf big waves and when the wind is howling, Parr can often be found kiteboarding through the air off Martin County beaches.

Since heavy winds needed for kiteboarding only blow a few months of the year, Parr needed something to keep in shape so he took up cycling. Three times he has ridden the USA Pro Cycling Challenge, six days at altitude and 700 grueling miles straight up into the Rocky Mountains. Parr also rode twice in the Tour of California, a series of 100-150 mile legs in the mountains from Santa Clara to Santa Barbara. His longest single-day ride was the Latoja, 204 miles from Logan, Utah, to Jackson Hole, Wyoming.

Parr attended the Annecy France cycling camp where the riders ride the actual legs of the Tour de France. The group made the Alpe d’Huez climb, the first mountaintop finish in race history, with switchbacks all the way up and 21 turns. “It was my first trip to Europe and it was magical,” said Parr.

A trip to Kauai in Hawaii, combined both kiteboarding and cycling around the island’s mountains.

Most of his freediving is in the water off the northern Bahamas and he has been down to 100 feet. Parr caught a massive 80-pound black grouper in 50 feet of water with a Hawaiian sling — not a spear gun.

One of Parr’s greatest experiences was being a part of the medical team stationed as close as safely possible — sometimes in an armored vehicle — to the launch pad and the space shuttle runway at Kennedy Space Center. If something went wrong at liftoff, the options were the crew could eject, or the shuttle might come right back to land or make one orbit and land. For five years, he was as close to ground zero as anyone could be for launches and landings.

“You feel it vibrating through your bones and reverberating through your chest, the thunderous roar of the solid rocket boosters with the liquid oxygen from the shuttle’s main engines. It was awe inspiring. ” Parr said. “It was cool. I could go anywhere I wanted except inside mission control. I met astronauts, future astronauts, cosmonauts and the ground crew.”

During his residency, Parr became the medical director for the Jacksonville Sheriff’s Office SWAT team. “I loved shooting and hanging out with those guys,” he said.

These days Parr works 12-14 hour days and then has days off to spend with his family. His wife, Amy, is a cardiologist, and the couple has been juggling parental duties for four children for almost 10 years.

“I like working in the ER and being able to make a huge impact on people who are really sick,” said Parr. “People are moments from death and making the right decisions can save a lot of those people. The variability of what comes in here. You have to know the essential parts of every aspect of medicine. The hardest thing is trying to meet the expectations of every patient you see.”

When a railroad worker was pinned between two cars, it did not look good. “It nearly cut him in half,” he said. “He lived. He was in the intensive care unit for a long time, but he lived. We see minor trauma, some major trauma and unrecognized major trauma. If the paramedics make the decision the patient won’t make it to the trauma center (in Fort Pierce) the patient will come here.”

Amazingly enough, Tradition Medical Center saw a steady stream of walking-wounded come into the emergency room during Hurricane Irma and a surge after the storm passed. “We had to redirect staff,” Parr said. “It was matching our resources with the needs of patients.”

The day the hospital opened, Martin Health System planners knew they would have to double the size of the emergency room, a project now completed, he said. As the director of emergency medicine, Parr works shifts at St. Lucie West’s ER, Tradition and Martin North and South in Stuart.

As a waterman, Parr is alarmed about the condition of Treasure Coast waterways and stepped up to the plate in Tallahassee earlier this year. He testified before the state Senate Appropriations Committee on behalf of the plan to buy land south of Lake Okeechobee to move and filter filthy water, but he almost didn’t get the chance. A big sugar representative filibustered for 50 minutes, Parr said. The senate bill passed.

Parr said he has seen dozens of patients he believes were sickened after swimming in local waterways.

“Being in the water all the time, water quality is paramount,” Parr said. “I see people coming in all the time with respiratory problems and skin infections. There is a high bacterial load in the water. And then you find out they have been in the water. It is an issue and it makes people sick. It’s hard to collect that data and show cause and effect. There is a lot of animal waste coming from north of the lake. If you swim in sewage, you get sick. You don’t need a medical degree to see that.”

Parr is also an oral board examiner for the American Board of Emergency Medicine.

“Education is important to me,” he said. “I enjoy mentoring to pass on medical knowledge to the next generation.”

If you see Parr out kiteboarding in screaming winds or cycling around Martin County, someone else is watching over the emergency rooms — for the time being.

“I try to find the balance between work, life and health,” he said. “Kiteboarding and biking help me decompress and stay fit from the stress of working in the ER.”

What inspires me: “People overcoming adversity — big and small.”

Something most people don’t know about me: “I was on the University of Florida NASA medical team for 40 space shuttle launches and landings.”