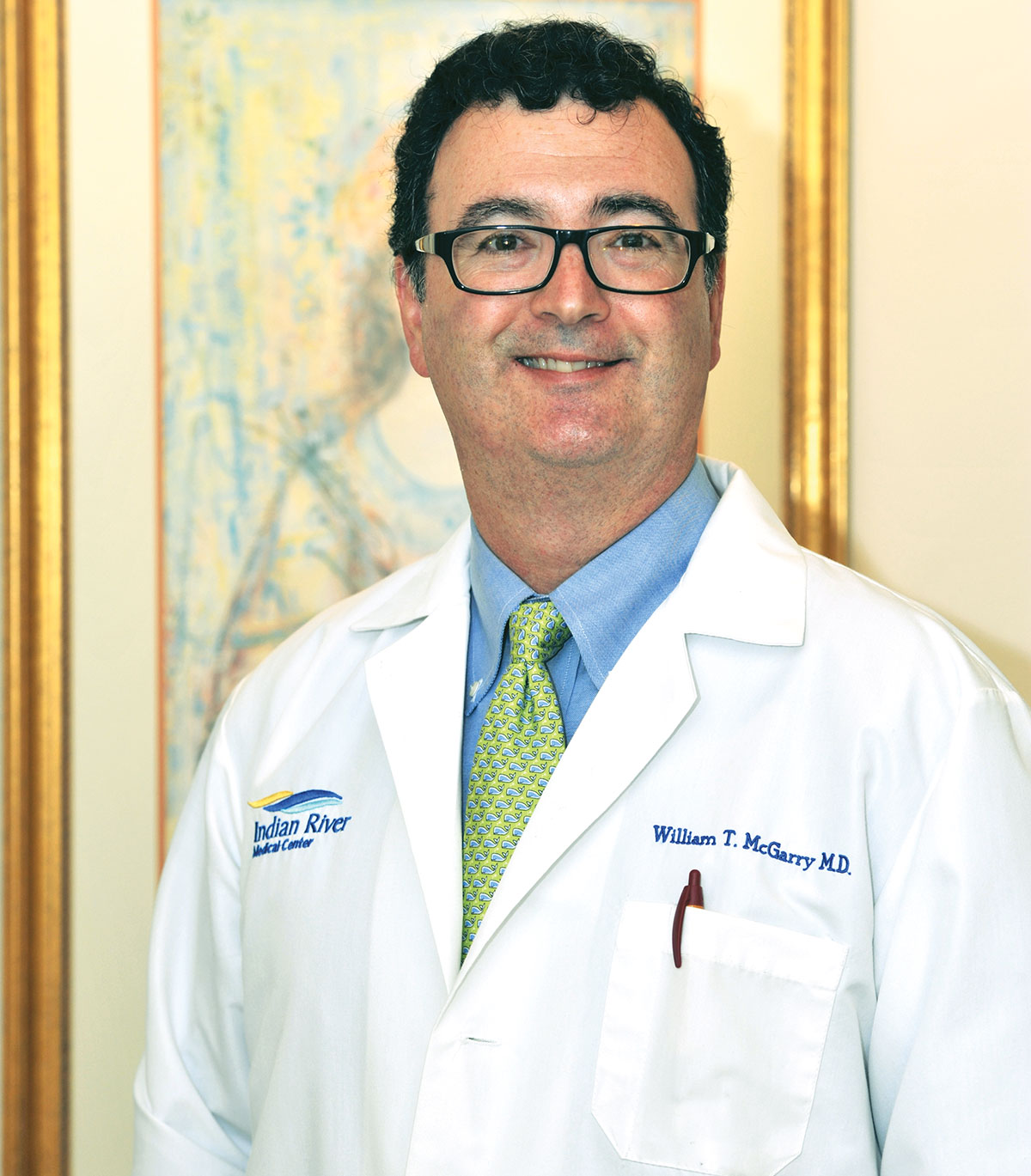 Dr. McGarry is a well-respected hematologist and oncologist in Vero Beach.

Four years ago, Dr. William McGarry, a father of three and board-certified hematologist and oncologist in Vero Beach, developed esophageal cancer. As many in Vero are aware, Bill, as he is known, beat it, but few know that he attributes his recovery, which was remarkable, less to modern medicine and more to his faith, something he nurtures on a daily basis.

“I pray for all of my patients past and present, living and deceased, whenever I go there,” he says. And now his healing prayers include an unexpected patient ― his wife Laura, who was diagnosed with breast cancer in April.

When Laura’s gynecologist told her the result of the biopsy she was shocked, even though she and Bill suspected it after he did a breast exam and discovered a lump that had not been there a month before, suggesting fast growth. But suspecting and knowing are too different things, and Laura was loath to tell her husband, who was scheduled to take a Board of Internal Medicine exam in three days.

“My first thought was I have to avoid telling Bill until after his exam,” says Laura, who is a nurse and works parttime at Bill’s office. Another concern had to do with a trip that she and Bill were scheduled to go on in a few weeks to Lourdes, France, a Catholic holy site whose natural spring waters are believed by many to have miraculous healing properties. “My second thought was that we had a much anticipated pilgrimage to Lourdes in 2 1/2 and unless I tell Bill ASAP and get the necessary testing started, it may interfere with our trip,” says Laura, who is also Catholic.

Laura did tell her husband before the exam (which he passed), and both were grateful that her surgery could be scheduled for one week later, allowing them to still go to Lourdes, something the couple were looking forward to more than ever, given Laura’s diagnosis.

Lourdes, after all, had played an important role in Bill’s healing. Back in 2011, when he learned he had advanced stage esophageal cancer with a 5 percent survival rate, he expected to die soon. Bill now believes a miracle happened the day after his diagnosis, when the family priest stopped by to pray with him, Laura, and their three children. After the family finished praying, the priest gave Bill some spring water from Lourdes. Incredibly, six weeks later, after only one round of chemotherapy, the same physician who diagnosed his tumor did a second endoscopy and was awed at what he found. “He said he no longer saw any tumor, just mild redness, and said if he hadn’t seen his tumor six weeks prior he would never believe Bill had cancer six weeks before,” recounts Laura.

When Laura learned of her diagnosis this past spring, she immediately blessed herself, making the sign of the cross with water from Lourdes. “The holy water is not used superstitiously, but with prayer,” says Laura, echoing the sentiments of her husband. “The Lourdes water helps me focus my prayers and faith.”

A week later Laura had the surgery, a double mastectomy, and 10 days after that she and Bill were on a flight to Lourdes, chartered by the Knights of Malta of Baltimore, an international Roman Catholic order that dates back to the Middle Ages. Every year, Knights of Malta from around the world bring sick people to Lourdes and need doctors and nurses to assist them. They had invited the McGarrys, who happily accepted.

Despite just having had major surgery, Laura donned her nurse’s uniform and found healing by helping others. She and Bill also made time for contemplation. “I went there and prayed. The message I kept hearing was ‘be not afraid.’ ”

During the visit, the couple experienced an auspicious sign. While waiting along with about 100,000 other people in front of the Rosary Basilica for the Eucharistic Procession to begin, a friendly stranger struck up a conversation with Bill. It turned out he was also a Knight of Malta but from a different group, and he had the words “Be Not Afraid” on his shirt, the very words that Laura kept hearing in her prayers. Unsolicited, he told Bill how his wife, who was standing next to him taking photos of the crowd, had had breast cancer a few years before and was now in full remission. “What are the odds? Out of the 100,000 people here he decides to strike up a conversation about this,” says Bill.

Today, Laura is free of cancer but continues chemotherapy as a precaution. Having faith in both modern medicine and God makes perfect sense to her. “I feel God is the ultimate healer and physician. He works directly or through others ― human physicians and the treatments prescribed,” she says.

Bill, who pursued an aggressive course of treatment for nearly a year even after his doctor found no evidence of cancer early on, concurs. “Obviously I believe in modern medicine,” he says. “But throughout my career I always saw how people who had faith seemed to do better with their illness. Those with a strong faith tend to have more peace throughout their illness, regardless of outcome. I was always relieved when I had a religious patient because of the strength it gave them. I would try to find out what my patients’ faith was and encourage them in their own faith, not mine, if they had one. When I fell sick I took my own advice. I sought and found strength and solace in prayer and my own Catholic faith.”

Name: William T. McGarry
Age: 50
Family: Wife, Laura, and three children
Hometown: Vero Beach
Hobbies: My hobbies were scuba diving, playing basketball and running before I got sick. Now I play guitar but have very little time for that.
Something others don’t know about me: Few people know that Laura and I both knew on our first date that we had just found the person we would marry, which we did 2 1/2 years after that first date.