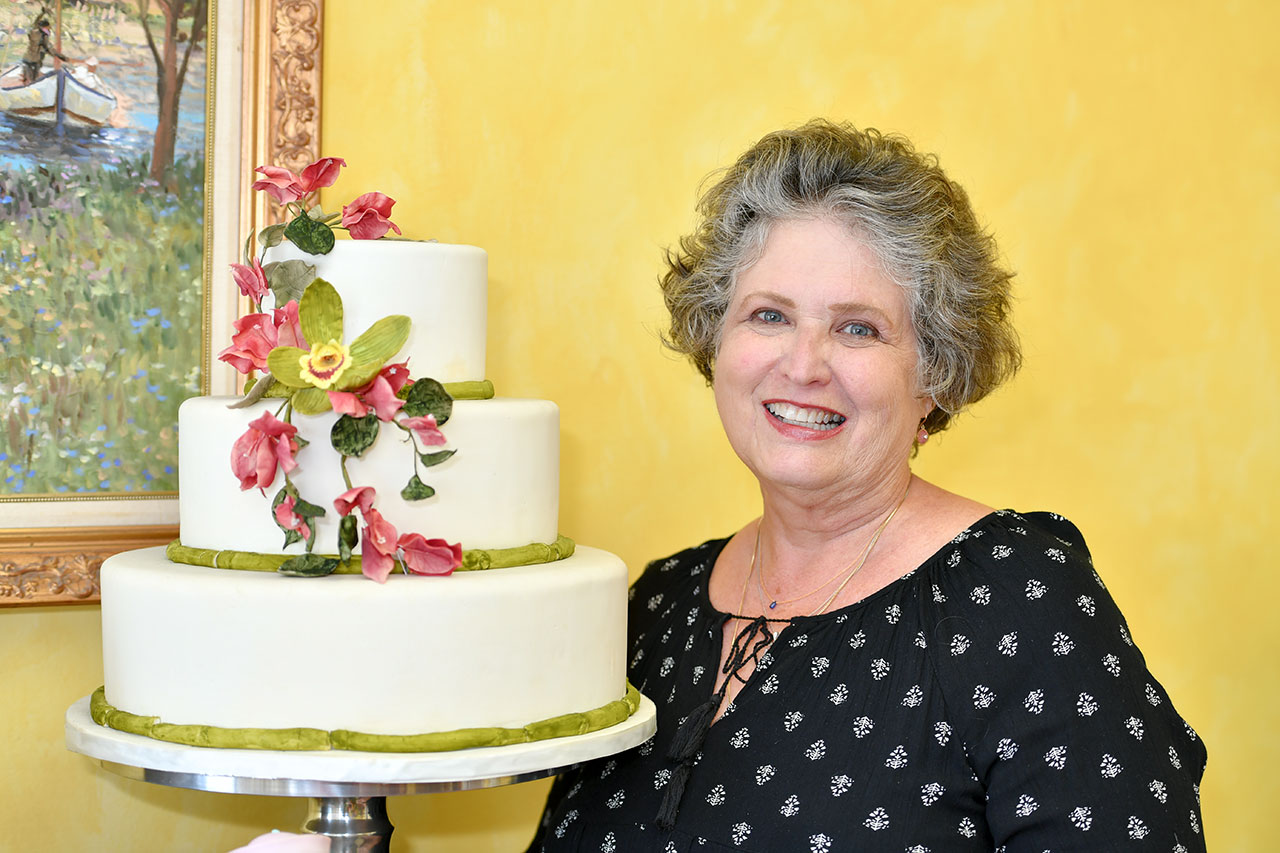 Charlotte Glover creates cakes that are not just desserts, they are truly works of art.

Whether it’s lavender orchids cascading down tiers of Swiss meringue buttercream or an aquatic scene with sea turtles and starfish on top of aquamarine fondant, each cake has its own individual style and reflects the client’s personality.

“We want to make a cake that looks so pretty that no one wants to cut it and tastes so good that there’s not enough to eat,” she said.

Creating is not only Glover’s passion, it is her way of life. As a young girl, she was intensely curious about art and has taken classes in oil painting, ceramics, clay and bronze sculpting.

“You name it, I did it,” she said. “Creating things was always in my brain.”

In 2011, Glover decided to strike out on her own as a cake artist and opened Magnolia Cakes & Confections in Stuart. Her Southern roots inspired the name.

“I’m from Louisiana, I was studying a lot about cake design in Savannah and I love the flower,” she said.

It was at a meeting with friends Jan Bruner and event planner Anna Marie Wintercorn, who first encouraged Glover to create her own niche in the business world by using her talents. Later that day, she stumbled upon an Ices (International Cake Exploration Society) website and learned about an upcoming cake design class held in Savannah. She signed up, attended the class and got hooked — and has never looked back.

“There are so many parts of my life that fit into it — it just felt right,” she recalled. “I realized early on that it was a way to use my creativity with art. Not only with my painting and sculpting, but my love for flowers and gardening.”

Hand-painted flowers are her specialty and set her apart from most cake artists. Her creations, which include calla lilies, roses, daisies, peonies, orchids, sweet peas and hibiscus, are made of sugar paste and are so lifelike that they look as if they were just picked from a garden.

“I like my garden and that’s where this all started,” she said. “The cake thing was a curiosity of mine. When I met my instructor, Minette Rushing, and took a class from her, that’s the first time I saw what you can do with sugar.”

To personalize the wedding cakes, Glover requests couples bring to a consultation any meaningful object they might want replicated on the cake. She has incorporated such items as features on the bridal gown or wedding invitation and certain colors or flowers that are part of the event.

Her bakery also makes cakes for birthdays, wedding showers, baby showers and other special events that can be catered to the client’s vision.

“We’ve done a lot of things for different events,” she said. “We create cakes every year for a book signing that a group of local writers do. We’ve done celebrations out at the Seminole reservation, the 50th anniversary cake for the Florida Oceanographic Society at the Elliott Museum and one for the Environmental Studies Center fundraiser. I’ve worked with local party planners and private residents on Jupiter Island. We will work with individuals as well as businesses.”

Glover has developed and honed her cake-designing skills by taking master classes from experts in the industry. Ron Ben-Israel, who is a judge on Food Network’s Cake Wars, Nicholas Lodge, who helped make Princess Diana’s official wedding cake, and sugar artist Robert Haynes are some of her instructors.

Her special talent has earned recognition from leaders in the cake world. Cake Central Magazine once sent Glover a picture of a Bernini sculpture, Apollo and Daphne, and asked her to transform the image into a wedding cake. She and associate Corina Pelloni crafted an impressive museum-like replica that appeared in the magazine. Another cake masterpiece they created — an interpretation of a J.M.W. Turner painting — was also published in the periodical.

Glover makes every cake and confection from scratch and uses only natural ingredients such as eggs, butter and pure extracts. Popular cake flavors are chocolate, carrot, vanilla, coconut, caramel and red velvet. They are combined with a wide variety of fillings and since they are custom-made, the possibilities are almost endless.

Magnolia Cakes serves the Treasure Coast from Vero Beach to Palm Beach. Pleasing her customers has been Glover’s greatest satisfaction. Helping people celebrate special occasions is what motivates her to keep creating her amazing works.

“I’ve had clients call me at the end of their party or event and say how much they loved the cake,” she said. “For somebody to take that time to write me a special note or send me a picture — that is my reward.”

Education: Art is a lifelong study, so sporadic and ongoing. Graduated from Belmont Academy; studied at the University of Southwestern Louisiana and at Indian River State College

Who/what inspires you: “There are people who inspire me on a daily basis. They struggle every day and they get out there and do the best they can. I also like to watch kids — they inspire me. They don’t think about how things are going to look to other people. They’re just out there discovering and exploring. There’s a beauty to watching people learn and try things.”

Something most people don’t know about me: “I wanted to be a lawyer. My daddy was the sixth generation in a law firm going father to son in Louisiana.”