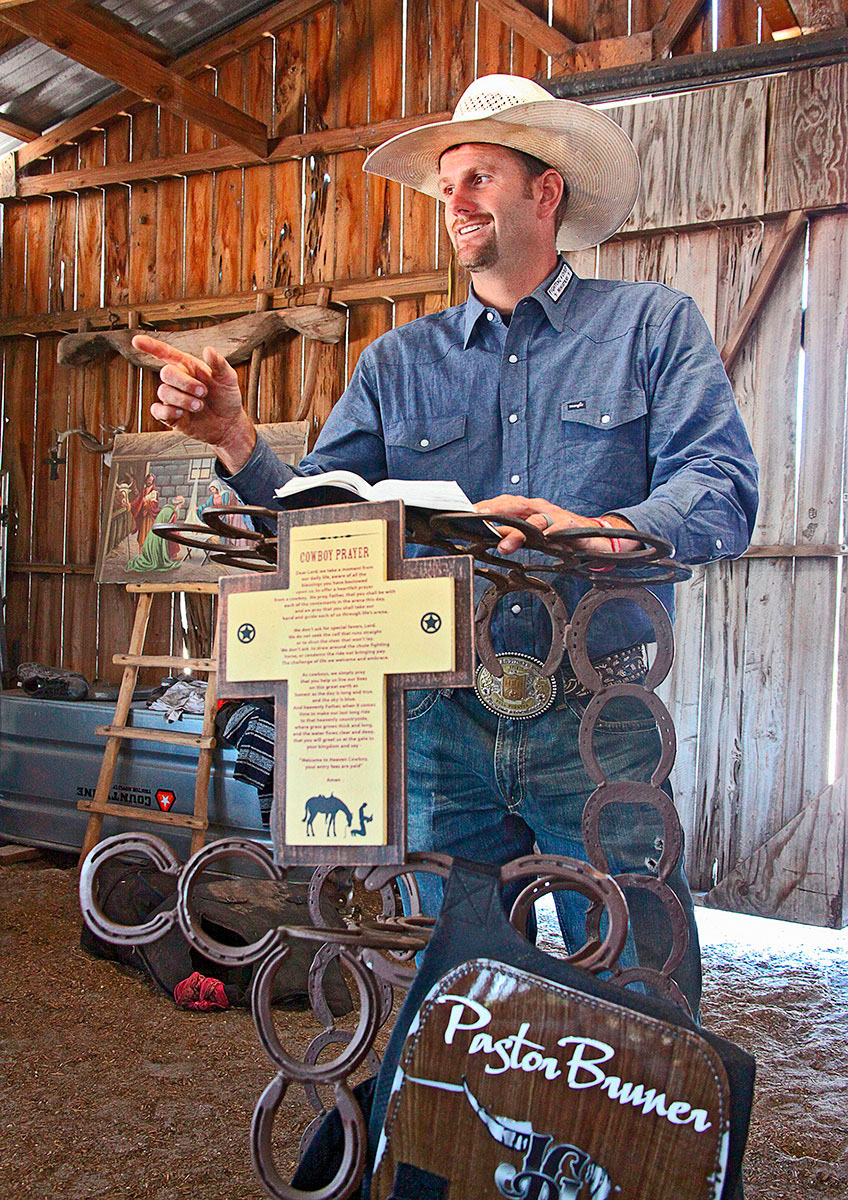 When Pastor Stephen Bruner is home in Indiantown, he preaches to his congregation from the custom-made pulpit at the Gethsemane Ranch Church. GREG GARDNER PHOTO

Despite a career of physically saving thousands of lives as a professional bullfighter, Stephen Bruner sees his true calling as a pastor who saves souls.

The 32-year-old Stuart native uses his story of illness, tragic injuries, miraculous comebacks and rise to the top of professional bullfighting as an inspiration while he spreads the gospel at rodeos around the country.

One of the most dangerous jobs in sports is the bullfighter who must risk his own safety to protect the rider who has been thrown. Rodeo clowns are still around, but the emphasis today is on speed and strategy to get the rider safely out of the ring.

Sometimes the bullfighter will take the hit to save his fellow cowboy as Bruner did at a 2015 rodeo in Indiantown. Video shows the rider being thrown and the bull going for him. Bruner goes straight between the bull and the rider and is struck. He flies into the air and lands straight down on his head, breaking the C-6 vertebrae in his neck. “I knew it was broken,” he said. “My tongue was numb.”

Seven weeks after his injury, and against the advice of his doctor, Bruner traveled to Las Vegas and won the Bucking Stock Sale bullfighting competition. Against all odds, Bruner beat testicular cancer in 2011, but it took him two years to get his strength back.

“That was my biggest comeback,” he said. “I lost some feeling in the bottom of my feet, but I should have had no chance for survival.”

Despite pleas from his family, Bruner continues bullfighting, going on the road four out of five weekends a year mostly in the Southeast rodeo circuit. He has torn ligaments, broken his arm, leg, ribs, neck and suffered quite a few concussions, he said. Bruner wears braces to support his blown-out knees.

During the week, Bruner devotes his time to the 27-acre Gethsemane Ranch Church, where he often preaches on Sundays and supervises the rodeo camps on the property off State Road 714 in western Martin County. Named for the place in the Bible where Jesus prayed before he was crucified, Gethsemane has the facilities to host training for all rodeo events. A barn that has been converted to a church also serves as a kitchen and dining hall. Camps are held during the summer, spring break and at Christmas so more than 200 young boys, largely from Martin and Okeechobee counties, can attend when they are not in school. Families are not charged for the camps.

Gethsemane operates as a ranch, selling some livestock, but most of the operating funds come from donations and odd jobs such as setting up fencing for the annual Indiantown Rodeo. For bull riding Christians, a “buck bulls” church service is every Wednesday at 7 p.m. and Sunday service at 11 a.m.

“A lot of kids come from broken homes,” said Bruner, who became an ordained minister in 2009. “We want to build a strong foundation so they find their identities and they don’t grow up to go to rehab. At the end of the camps, the kids don’t want to go home.”

After a morning session with some calf riding, the boys go to the church house for lunch. “If you don’t like mayonnaise, you are going to get double baptized,” said Bruner while the kids eat up ham and cheese sandwiches with lemonade, water or tea.

It is a cool March day and the after lunch mini-sermon is around the campfire. “God doesn’t want to use people with big heads,” Bruner said with Bible in hand. “Does God want us to have confidence? Yes. He doesn’t want us to think we have an entitlement that makes us better than anyone else. Peter was the knucklehead who denied him three times and God still wanted to use him. You’re not the smartest kid in class. You don’t rope the best. You don’t run the fastest in football. God wants to use you. That is why he picked David. How many would want to be on God’s team? Many are called, few chosen and not many answer the call. What you give up for God is worth it.”

The kids move back to the rodeo ring for some small bull riding, which also gives future bullfighters the opportunity to work their craft including jumping over the bulls and physically corralling them with both hands.

Bruner is the bull whisperer, always watching intently when the huge animals with young riders burst out of the chute. When a bull comes toward the exit gate Bruner stares him down and the bull decides to go around him. Otherwise, it was a climb the fence or be gored situation. Built like an outside linebacker, Bruner has amazing agility as he darts around the ring.

While he coaches the other bullfighters, Bruner never takes his eye off the huge animal running wild in the small ring. The small bull riders wear helmets, and rodeo really is a rough and tumble sport.

“I’ve seen a lot of trauma in my career and we like you little guys to wear helmets,” Bruner said while adjusting the helmet and face mask for Landon Pankey, who comes from a family of Okeechobee bull riders. “A bull broke this man’s face. If he had not been wearing a helmet, he would have been killed,” Bruner said.

“Stephen Bruner is a very well-known pastor and role model,” said Jesse James, Gethsemane president and fellow minister. “He is making a big difference in the community. We use the bulls to get young people out, and that is how Stephen got started. He is charismatic and he has been dedicated to the ministry for a long time, especially with the young kids. He has brought boys to our camps who might not want to come otherwise.”

Fighting4Christ is the organization Bruner formed to preach the gospel at high school rodeos. He disciples other rodeo professionals as rodeo chaplains when they attend events as a team, James said. Bruner said he preaches at about half the rodeo events he goes to.

“It was middle school before I started swinging a rope,” said Bruner, who grew up playing traditional sports. “I was mesmerized by bullfighting in high school and I thought I can do this. No more face paint for me, but if I can put on my knee braces, shorts and cowboy hat, I have more to accomplish. If I am not doing my job, someone gets hurt.”

What inspires me: “Rodeo is my platform to share the gospel, spread the news. I get to travel to towns, meet people, share my faith and give them hope.”

Something most people don’t know about me: “I played Romeo in a college theater production to pass my last elective class.”