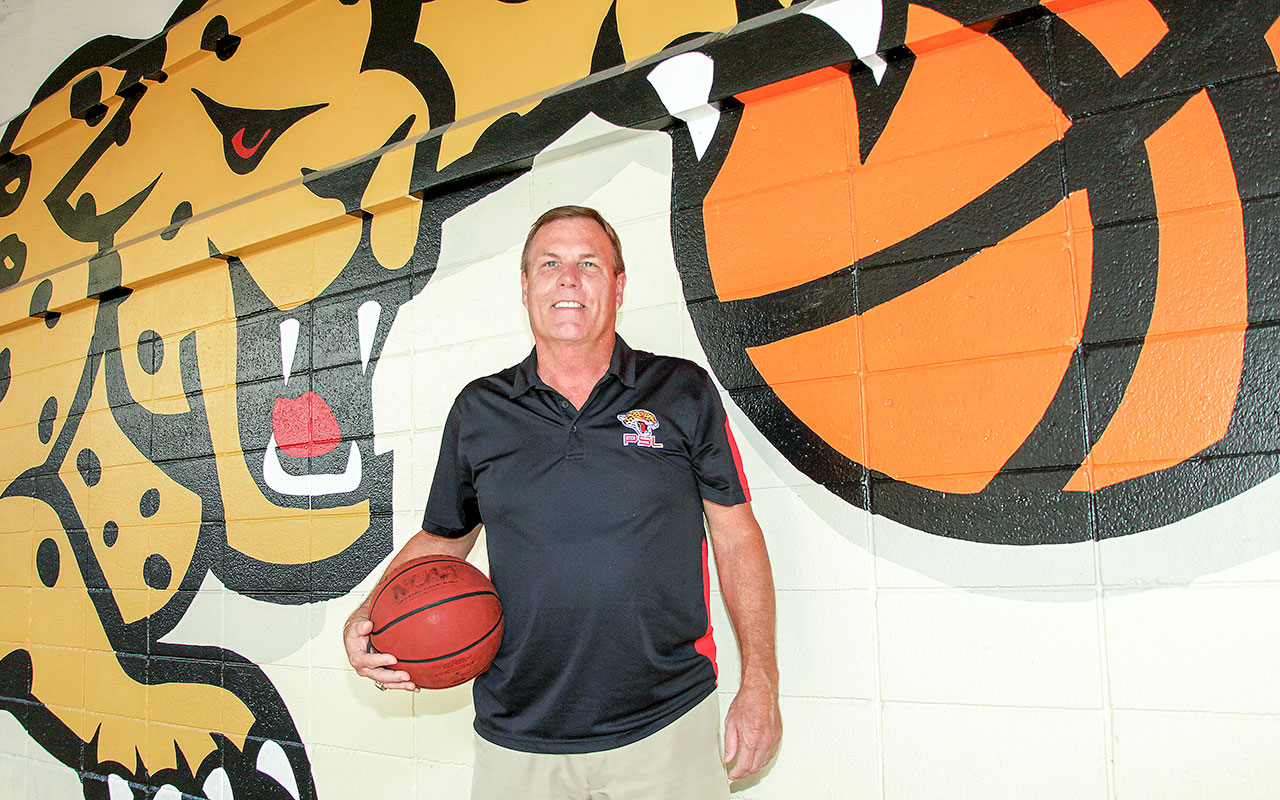 Nowhere is Jaguar pride more evident than when Port St. Lucie High School athletes are on the field and they see their athletic director, Danny Ninestine, cheering for them — whether they are playing away or at home. GREG GARDNER PHOTO

Danny Ninestine has been a role model for generations of students as a coach, teacher, and athletic director at Port St. Lucie High School.

“It is mind boggling – tens of thousands of kids over the years and I see every kid in the school who goes to lunch,” said Ninestine, who has been at Port St. Lucie since 1990. He has been head coach and assistant coach for baseball, football and basketball.

“Kids come up to me and say, ‘You had my mom and dad in your class.’ ” Ninestine said. “Or someone will come up introduce me to his family and tell me about his job. ‘And I remember when you told me. . .’ I remember their faces and sometimes their names, but I don’t remember a word of what I said to them. I didn’t realize I had an impact. A kid will tell me I was hard on him, but he now understands why. I appreciate it and like to run into former students. I thrive on it, but some of my colleagues don’t.

“I woke up excited this morning,” Ninestine said. “We have our Fall Sports Awards ceremony tonight and we are playing soccer against Lincoln Park. We are getting new bleachers. The track and tennis courts are going to be resurfaced as soon as it stops raining. I have a lot going on in my mind.”

A teacher popped into the AD’s office to update Ninestine on a student. “He is not going to school in any division if he doesn’t fix (grades in) that class,” he told the teacher. One of the more difficult parts of the AD job is continually encouraging students with athletic scholarship potential to earn the grades to get into college, he said. “No 2.0 (grade point average), no play. That is state law. It is hard to tell a student he is ineligible because of academics and it is hard to discipline athletes when they get into trouble. I wear many hats in this job.”

Probably the most famous Jaguar athlete to graduate is Rick Ankiel, a pitcher converted to outfielder who played for several Major League Baseball teams and works as a TV announcer. “Rick Ankiels come along once in a lifetime,” Ninestine said. “All I did for Rick was keep the scouts from bothering him on days when he was pitching.” Scouts from all 30 major league teams mobbed the fields when Ankiel pitched, he said.

Ninestine has battle-hardened instincts and reflexes from 44 years of officiating baseball and basketball games at high schools and colleges all over the state. That same cool under pressure demeanor has served him well when people sometimes have to be ejected.

When a basketball referee, a basketball referee came to him during a game and said, “If he says one more word, I am throwing him out.” Ninestine in turn told the spectator, “You are leaving right now with me or with the guy with the handcuffs. Take your pick. And I am going to walk you out and make sure you get into your car and drive away.” The man left peaceably and came back to a later game a different guy who never said boo after that, Ninestine said. “I told him, ‘You didn’t embarrass yourself. You embarrassed your three kids and their school.’ ”

From behind home plate, Ninestine umpired the opening New York Mets spring training game in 1998 at what is now First Data Field in Port St. Lucie. Over the years, he has worked more than 50 games as a substitute umpire including Los Angeles Dodger games when they were played in Vero Beach.

He has twice umpired for the Florida High School Athletics Association Final Four softball tournament. Ninestine has officiated NCAA basketball, baseball and softball games. At the local level, he umpired Little League, Babe Ruth and minor league games in the Florida State League. He has also umpired Fantasy Camp games in Vero Beach with the campers playing against old pros.

“You can’t let the crowd get into your head, and you try and become immune to it, but sometimes enough is enough,” Ninestine said, adding he hasn’t ejected anyone from a game in a few years. “I turn and point when there is a strike. This guy was riding me hard so I started pointing directly at him. Finally, his wife told him if he didn’t stop it, she was going to get up and leave him. That was the end of that.

“Another time I had to break up a fight between two 6-foot, 7-inch basketball players. They were much bigger than me. I pushed them both away and gave them both personal fouls. It was a little bit scary.”

In 2012, Ninestine was relieved of duties as AD in what was called a change in direction. He stayed on at Port St. Lucie in charge of testing and as a coach. “When I was let go, I put it up on Facebook and it agreed with what the administration had said,” he said. “The number of kids who commented about me was overwhelming and humbling.”

During those five years, Ninestine immersed himself in officiating baseball and basketball, usually four or five nights a week. “I didn’t know what else to do,” he said. “You can only pull so many weeds. If I had stayed at home I would have gone crazy.”

“I work with some of the greatest people at Port St. Lucie High School and my colleagues at other schools,” Ninestine said. “We are rivals, but we are friends. It is all about the kids. We have four teachers who graduated from here and at one time we had six,” said Ninestine, who is also active in the Florida Interscholastic Athletic Administrators Association, having been a past president and an Athletic Administrator of the Year.

“I love him and he is a great mentor and he is a friend,” said Demery Brown, a 1997 Port St. Lucie graduate, special education teacher and wrestling coach. “He’ll do anything for anybody. He always wants you to be a better coach. You mention a coaching clinic and he asks how much it costs and where it is. He will always be Coach in my mind. I have never, ever, ever called him Danny out of respect. He loves Port St. Lucie High School and he may love it more than me and I graduated from here.”

Ninestine said he would like to retire in seven years with a total of 45 years in coaching and teaching.

“I can walk away any time I want,” he said. “But what other job could I come to work for 38 years in shorts and sneakers? One day someone is going to say to me, ‘You taught my grandmother.’ ”

Hobbies: “Playing golf with my close friends and yard work. I have a green thumb.”

Who/What inspires me: “I grew up in a family that was very involved in the community. My dad was a teacher and I saw the impact he had on kids in the community. I have seen things done the right way and the great way. It inspires me to make the best situation for the kids whether it is playing junior varsity or getting a scholarship.”

Something most people don’t know about me: “I love to cook and work in the yard. I am going home for Christmas to see my family and I will do all the cooking.”