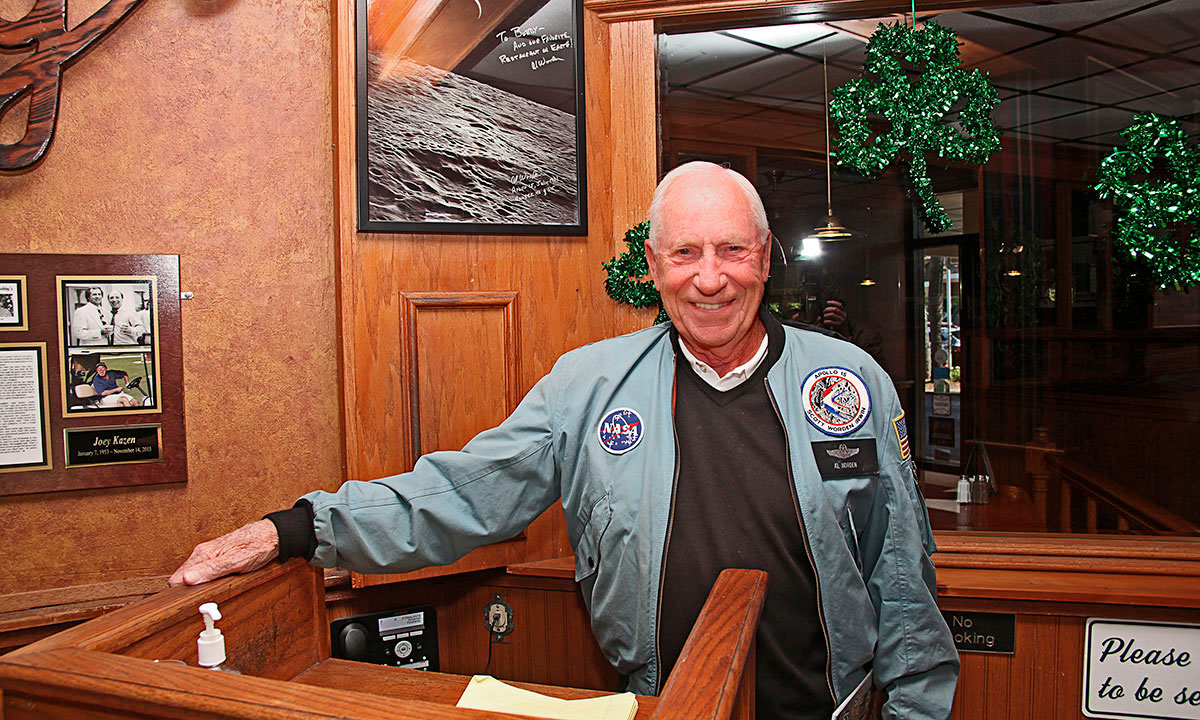 Astronaut Al Worden poses with a photo he took during the Apollo 15 trip to the moon at his favorite Vero Beach restaurant, Bobby’s. Worden piloted the command module Endeavor in orbit around the mono after the liftoff on July 26, 1971. GREG GARDNER PHOTO

Alfred “Al” Worden knew as a young boy he had to get away from the northern Michigan farm where he spent his summers, but he never dreamed his career path would take him to the dark side of the moon.

It was not a conventional journey that first-year music student Worden made on the way to piloting the command module for the Apollo 15 mission to the moon and making the longest walk ever in deep-space.

“I saw absolutely no future on the farm,” said Worden, who spends his time between homes in Michigan and Vero Beach. Always the good student, Worden was given a full scholarship to Princeton University until it was discovered he had not taken Latin. He received a one-year music scholarship to the University of Michigan, but knew he would never be able to afford three more years of college. A friend’s father suggested he apply to the military academies.

He received appointments to the U.S. Military Academy at West Point and the Naval Academy. “I don’t like the water that much so I decided to go to West Point,” Worden said. At the time, one third of the class at West Point had to go into the Air Force.

“The superintendent had fought in Korea and he had the Air Force tactical officers hidden away on the campus. I thought I was going to be the guy who led my troops up San Juan Hill. They (Air Force instructors) were tech driven guys and they convinced me.

“I looked at the other 850 guys (West Point class) and wondered how I would be able to compete. I realized the only way I would survive was to do everything with no slacking off. I dug in and realized later that they were no better than me. I was a battalion commander in the top 10 percent of my class. George Forrester was my Air Force tactical officer who mentored me. He would go on to be commandant of the Air Force Academy.

“I didn’t know squat about flying and I had only been in an airplane once,” Worden said. “It was all very natural to me and I became very good at instrument flying. We had an instructor with the call sign “Bendix” (washing machine) because he washed out so many pilots. He would yell so loud you could hear him over the engine noise. He never said much to me. Instrument training was my thing.

“I was obsessed with being the best pilot in the Air Force,” Worden said.

His early years were spent flying all weather missions in F-86s before he was tapped for the Empire Test School in England. Worden’s master’s degrees and technical background made him the candidate for the post. “We spent the weekends flying and the weekdays studying,” he said.

Worden applied to be an astronaut with NASA, but was not accepted at the time. He would go on to the advanced aerospace research pilot school at Edwards Air Force Base in California before being accepted into the Apollo program.

With his wonderful sense of humor and comedic timing, Worden talked about the Apollo mission.

“I was with those guys for four or five days and I thought it was time for them to go somewhere else,” he said. “I work fine by myself. My subconscious was very in tune with being in space. Your mind is constantly working 20 hours a day. I was busy with mission control and navigation.”

During the three days he orbited the moon, Worden listened to a “library of music” on cassette tapes, including the Beatles and John Denver.

Worden is listed in the 2015 Guinness Book of World Records as the most isolated person from any other person in history — 2,235 miles from his crew members on the moon and 196,000 miles from Earth.

Asked what David Scott and James Irwin did on the surface of the moon and what were their primary jobs, Worden said, “They picked up rocks and dirt. Now myself in lunar orbit. . .”

Prior to the mission, Worden designed the equipment that would be used to retrieve the camera film outside the module before returning to Earth.

“It upset a lot of the engineers, but I didn’t care,” he said. “You have to keep it simple. The more complicated, the more likely you are to have problems.”

Worden’s walk in deep space for 39 minutes in 1971 was the first and longest EVA (extravehicular activity) in world history. He retired from the Air Force as a colonel at age 43 and went on to work in aerospace engineering.

Perhaps best known by millions of children as a friend of Mr. (Fred) Rogers, Worden appeared on the children’s show as an ambassador for the space program to find out what the kids wanted to know.

“Many thought I was crazy. Astronauts liked to think they were super jocks who hunted, fished, drank, and chased girls. We didn’t do kiddies’ shows,” Worden said.

Educating children in STEM (science, technology, engineering and mathematics) has always been Worden’s passion. He spends one-third of the year traveling including making appearances and giving speeches for the Astronaut Scholarship Foundation, where he is a board member and past chairman. Four hundred students have received a $10,000 scholarship and the foundation has raised $7 million in the past seven years.

“These kids mingle with the astronauts, they get charged up and we follow them their whole lives,” Worden said. “We give them the connections and they don’t leave us.”

Worden is one of 11 astronauts who graduated from West Point as part of “the long gray line” which refers to graduates dating back to the beginning of the Army. In the 1955 movie of the same name, Worden played a younger version of Gen. Omar Bradley. A stickler for authenticity, Worden once asked movie director Ron Howard why something was made up in Apollo 13. “We had to make it interesting,” Howard said.

Worden’s first book was his autobiography Falling to Earth and his second book is Hello Earth: Greetings from Endeavour, a book of essays and poetry. His third book will detail what “going to the moon taught us about business.”

The return from the moon was not without peril. Jettisoned fuel burned through the lines of one of the three parachutes and was consuming the lines of a second at splashdown. The mission was over when command module pilot Worden stepped out of the capsule.

The future of mankind will not be on Earth, Worden said.

“In the short term we need to make it our business to go to new planets,” he said. “We have to convince people it is a good thing to go to Mars. That is how we will get the funding. The L-5 equilibrium points are the place to launch to Mars since there is no gravitational pull. We know the end is coming. Other suns have burned up. It might be 5 billion years from now, but we have to be able to go somewhere else and we have to be able to get there faster.”

What inspires me: “It is the children who inspire me. I spend a lot of time talking about STEM (science, technology, engineering and mathematics) programs to get kids into the hard science studies — the lifeline to our future. We will not survive unless we stay ahead of the technical curve in the world. Our information is that we are losing that battle and it is most important for our future to develop those with a talent for technical subjects to follow that course. They will make the difference between a truly successful country and an also-ran.”

Something most people don’t know about me: “I played the piano all the way through high school, and played in a band for many years. My mother took in (people’s) laundry to pay for my lessons. I had to give it up when I went to West Point.”