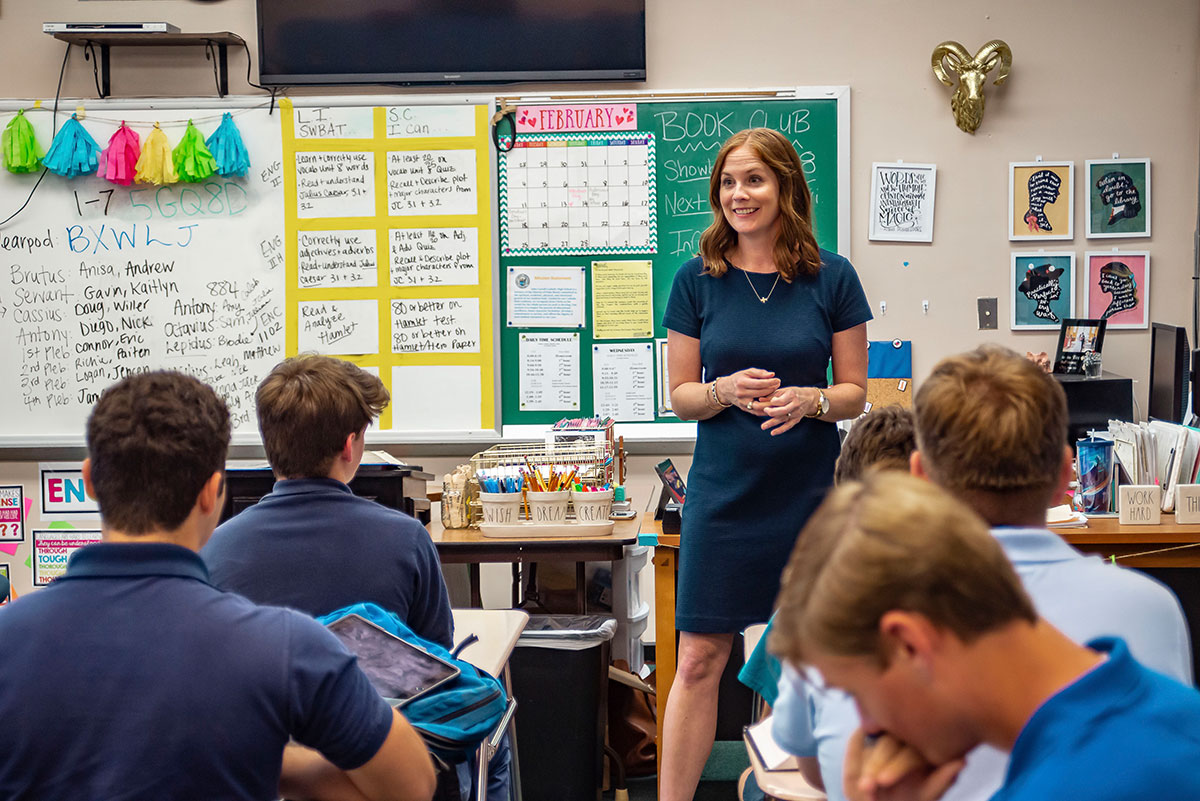 Principal Corey Collins Heroux speaks to students in an English class at John Carroll High School in Fort Pierce. She taught English classes for many years at the regional Catholic school and became principal at the start of the current school year. ANTHONY INSWASTY PHOTOS

With generations of educators in the family, it is no surprise that Corey Collins Heroux turned to teaching as a career. Her mother, Teresita Valdivia Collins, taught math at many different levels in Indian River County schools while Heroux was young. But the decades of family involvement in teaching on the Treasure Coast date back to the late 1960s. Her maternal grandmother, Teri Valdivia, had come with her young family from Cuba fleeing Castro’s communist control. She spent several years teaching Spanish at then-Dan McCarty High School and later the newly-built Fort Pierce Central High School.

Heroux’s dedication to the daily work that she loves at John Carroll High School in Fort Pierce led her to being named John Carroll Teacher of the Year in 2011-12. She also received the Lead with Zeal Award from the University of Notre Dame’s Remick Leadership Program, through which she earned her second master’s degree. That recognition contributed to her appointment to assistant principal in 2016 and to her current position as principal of the regional Catholic high school.

As a senior at JCHS in 2004, her father printed out for her some information on a unique program through Notre Dame. The program, Alliance for Catholic Teaching Fellows (ACE), is a competitive search for Catholic school educators to serve schools in low-income areas in return for a free-of-cost master’s degree in education. Heroux applied for the program in her senior year at Notre Dame, where she earned a dual bachelor’s degree in English and Spanish, with a minor in education. After graduation, she had a few weeks to rest before she started classes for the master’s degree in education and prepared to move into a group home shared by fellow ACE teachers in Baton Rouge, Louisiana.

“The unique thing about the program is that they place you in a community with other program participants,” she says. “There were six of us young teachers living in a house together in Baton Rouge. We shared living expenses and groceries. We took online classes during the school year and then went back to Notre Dame during the summers to take classes.

“My school was probably the most affluent of the schools to which teachers in my house were placed. This was surprising, as when you apply to the program, you expect to get placed at a very low-income Catholic school. St. Michael the Archangel High School had been with the ACE program since it started and was a failing high school in its first years in the program. ACE was a great program for assisting teachers and training them. It was a great place to cut my teeth.”

Heroux lived on the stipend ACE teachers earn and taught at the high school for two years. At age 22, she was only a few years older than some of her students. In 2010, she discovered that her alma mater had an opening for an English teacher. She applied and was hired, beginning her education career at John Carroll.

“It was great coming back to teach at John Carroll,” she says. “Some things had changed in the years that I was gone, but the community among the faculty and staff was very much the same. That was very welcoming to me as a new teacher at the school. It was a little strange to teach alongside a couple of teachers who had taught me, but they have been my biggest supporters and cheerleaders.”

While teaching English classes and some Spanish classes, she began working on a second master’s degree in educational leadership, hoping to move up to the administrative level. Linda Easom, longtime assistant principal at John Carroll, was getting ready to retire, and Heroux was hoping to move into that spot.

“I have always loved school and loved being a student,” she says. “When I went back to Notre Dame for my second master’s, my dad said, ‘You’re a glutton for punishment, going back for a third degree.’ I love learning. It sounds nerdy and cliché, but I like being a student.”

Heroux moved to Easom’s assistant principal position in 2016, working with Principal Ben Hopper. “Ben Hopper had been the principal for many years, and there was no idea that he would leave,” Heroux says. “Then, I moved into the principal position after he took another job in Florida. The teachers and staff were equally as supportive as when I first came here as a teacher. When you move from teaching into administration, there are some changes there, but they have been nothing but wonderful.”

Noting that the one thing she loved about classroom teaching is the fact that no two days are alike, Heroux says she has found her new administrative role to be much the same.

“There is never a dull moment,” she says. “Working through an issue with a teacher, or a student or helping a parent navigate an issue, there are so many moving parts, new challenges and new opportunities each day.”

In addition to her mother and grandmother, Heroux’s family line of educators includes her aunt, Maria Morgan, who is a teacher and assistant principal at St. Helen’s School in Vero Beach, and her older sister, Kaylee Tobin, who is a senior American government and economics teacher at John Carroll. Husband, David, is also an educator. He teaches music at Indian River Charter High School in Vero.

Reflecting on her first year of heading up the 385-student school, Heroux says she thinks it has gone very well, again thanking the cooperative spirit of the faculty and staff, and especially her sister.

“I have a wonderful administrative team,” she says. “Our assistant principal, Mindi Miller, is also new to John Carroll this year. She was the assistant principal at St. Joseph’s School in Stuart before that and she is a rock star. She is in the same leadership program as I was at Notre Dame and she will get her master’s in educational leadership degree this summer. We have implemented a couple of new things and are working on others to roll out next school year, but we really kind of dove in. We are looking at all aspects of the school and staying focused on continuous improvement.”

She adds that she and her team are working on getting better at “providing that kind of environment where a student is really known and loved and that their teachers play an active role in their educational experience throughout their four years — building relationships with their teachers and with the community here.”

It should be a wonderful second year, with many more to follow.

Lives in: Vero Beach
Age: 32
School: John Carroll High School
Family: Husband, David Heroux; two sons, Jack, 4, and Owen, 1
Education: Bachelor of arts dual degree in English and Spanish, minor in education, University of Notre Dame; master’s in education, University of Notre Dame; master’s in educational leadership, University of Notre Dame
Background: “I was born in Vero Beach, and from a young age my parents instilled in me the importance of my Catholic faith. In middle school I attended St. Helen’s School and then moved on to John Carroll. My experience at both of these schools during my formative teenage years had a profound influence on who I am and how I view the world.”
How I got into teaching: “When I was a senior in high school, my dad printed an article from Notre Dame’s website about a teaching program through the university called the Alliance for Catholic Education, in which recent college graduates commit to teaching in low-income Catholic schools across the country for two years following graduation. He wrote on it, ‘Corey, sounds like you!’ Sure enough, four years later I applied for the program and ended up teaching two years in Baton Rouge, Louisiana.”
What I like best about teaching: “I love that no two days are the same in teaching, and the same rings true in school leadership. I tell people all the time that I love my job because I am constantly using my brain to solve problems and help others; I love that I get to grow along with my students.”
Something my students probably don’t know about me: “My guilty pleasure is watching The Bachelor franchise and reality TV shows on Bravo.”