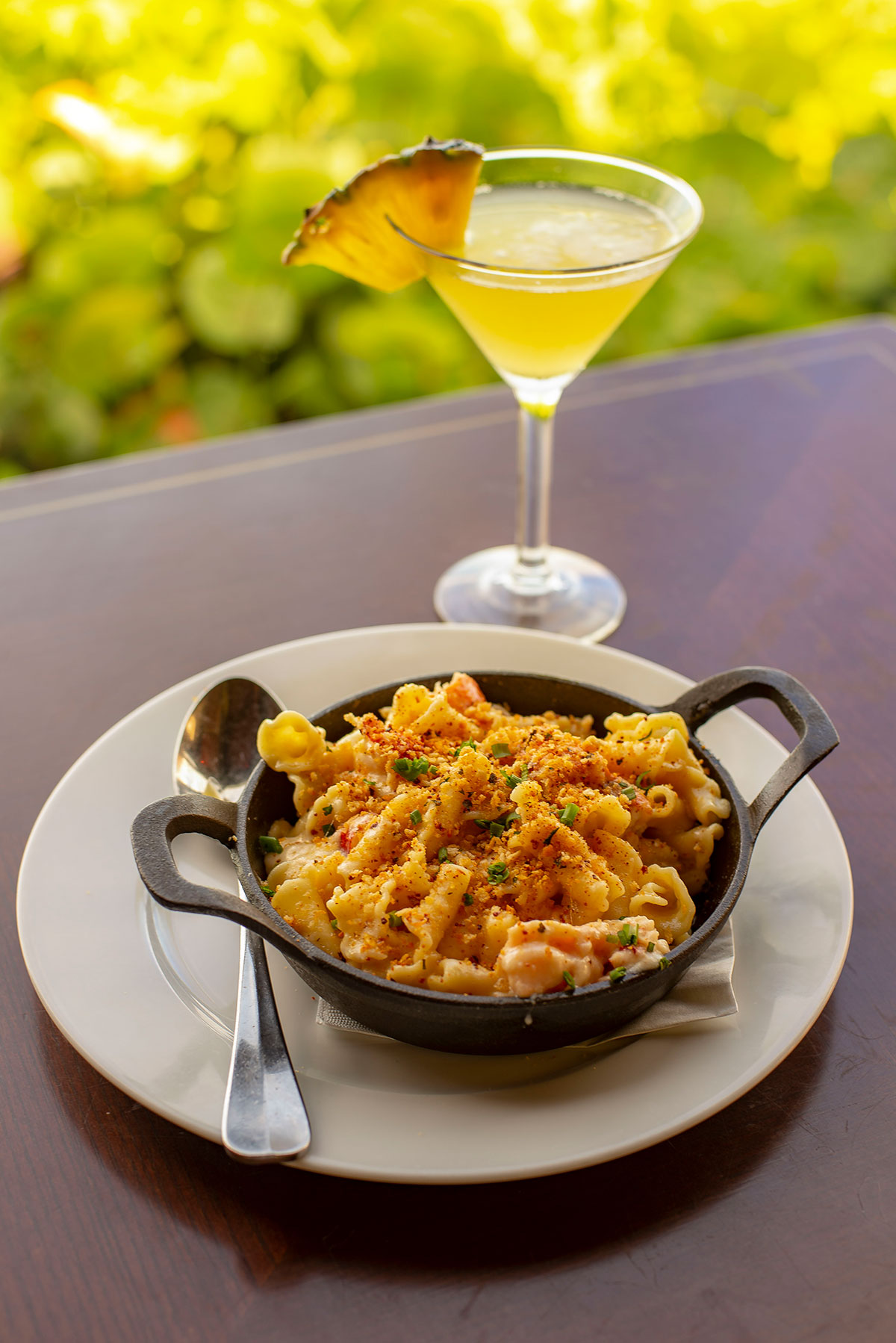 “I’m just happy that we’ve been able to break all sales records ever for this building in 30 years,” declares Kyle Greene, owner of the spot now known as Kyle G’s on Hutchinson Island in Jensen Beach.

Greene has created a unique dining experience that many view as second to none. His goal in developing the concept for his restaurant was to have a little bit of everything for everyone. The eclectic menu blends the freshest daily catches with high-quality raw bar and shellfish selections, and premium cuts of meat — all meticulously prepared for patrons to enjoy inside or oceanside.

“You might see a forty-five-dollar ribeye and fish tacos at the same table, and [the variety] has really allowed for us to open up to a very broad clientele base in the area,” Greene says.

EAT LOCAL, BE COASTAL
Kyle G’s motto, “Eat Local, Be Coastal,” is based on sourcing as many local ingredients and people to work with as possible. All the bread is made fresh in a local bakery; a couple of desserts are outsourced from What’s Up, Cupcake?, a mile down the road; and Kyle G’s produce vendor and main fishmonger are close by as well.

“The thing I am most proud of about this place is when people say, ‘You guys are doing it right,’” Greene says. “We bring in a few specialty items from the North Atlantic, which is nice in the sense that many of our guests, both seasonally and year-round, are from up there and they notice details like that.”

Greene grew up on the Treasure Coast, and the roots of his career are here as well. One thing that particularly stands out about this establishment is its focus on the community. By donating leftover food items to a local food bank through Second Harvest, employing individuals with special needs to provide opportunity through jobs, and learning and donating shucked oyster shells to the Florida Oceanographic Society to help rebuild our reefs, Kyle G’s gives back to the area in ways that are invaluable.

COMING FULL CIRCLE
Built in 1989, the venue started its journey as a laid-back beach spot called Island Reef. Next came Rotties in 1999, a more upscale and country club-like establishment where Greene worked at age 17 after deciding to become a chef.

“This is where I learned fine dining and how to really educate myself on food and quality,” Greene says. “I learned so much from the team, and it really set the tone for my career.”

The notorious hurricanes of 2004 sadly left Rotties defeated in their wake. While the building sat empty for nine years, Greene went on to graduate from Florida Culinary School (more recently known as Lincoln Culinary Institute) and utilized several opportunities to learn front and back of house operations.

Fast forward to 2013 when the original general manager of Rotties re-opened as Pietro’s on the Ocean. Greene served as executive chef for a short tenure, and with the passion for building teams and helping others succeed that he developed early in his career, he began to develop a business plan for his next endeavor.

When Pietro’s closed its doors in June 2017, Greene soon discovered that the location he had so much history with — the place where it all began — would become available. “I was given the opportunity to meet with the landlords and told them I would drop everything to do this,” Greene recalls. “They loved what I had to say. They took a shot on me and the place has been slammed ever since.”

RELAXING ATMOSPHERE
“I wanted to break that mold of what this place was typically known for,” Greene explains. “If you want to come in sandy off the beach in flip-flops to relax and enjoy yourself, then you should be able to do that. We want everyone to have a good time here because that is what the Treasure Coast is really about.”

One thing that has been a particularly huge hit for Kyle G’s is its brunch, which was recently named by Stuart Magazine as one of the best in the area. The restaurant offers its lunch menu along with various a la carte brunch items. Patrons also have the option of enjoying the bottomless mimosa and Bloody Mary bar. “The idea was to make it so locals can come for a half-day vacation,” Greene says. “Hang out and enjoy this beautiful area that we live in. We even have people who stay for dinner.”

Greene says that Kyle G’s has really been able to positively impact a lot of people’s lives — both team members and guests. He truly believes he was made to run restaurants, train teams and provide a great environment to both work and dine in. People aren’t always going to remember what they ate or who their server was, but they’ll remember that they had a great time.

Greene adds: “It all comes down to honest food and honest service. We don’t try to be something we’re not.”