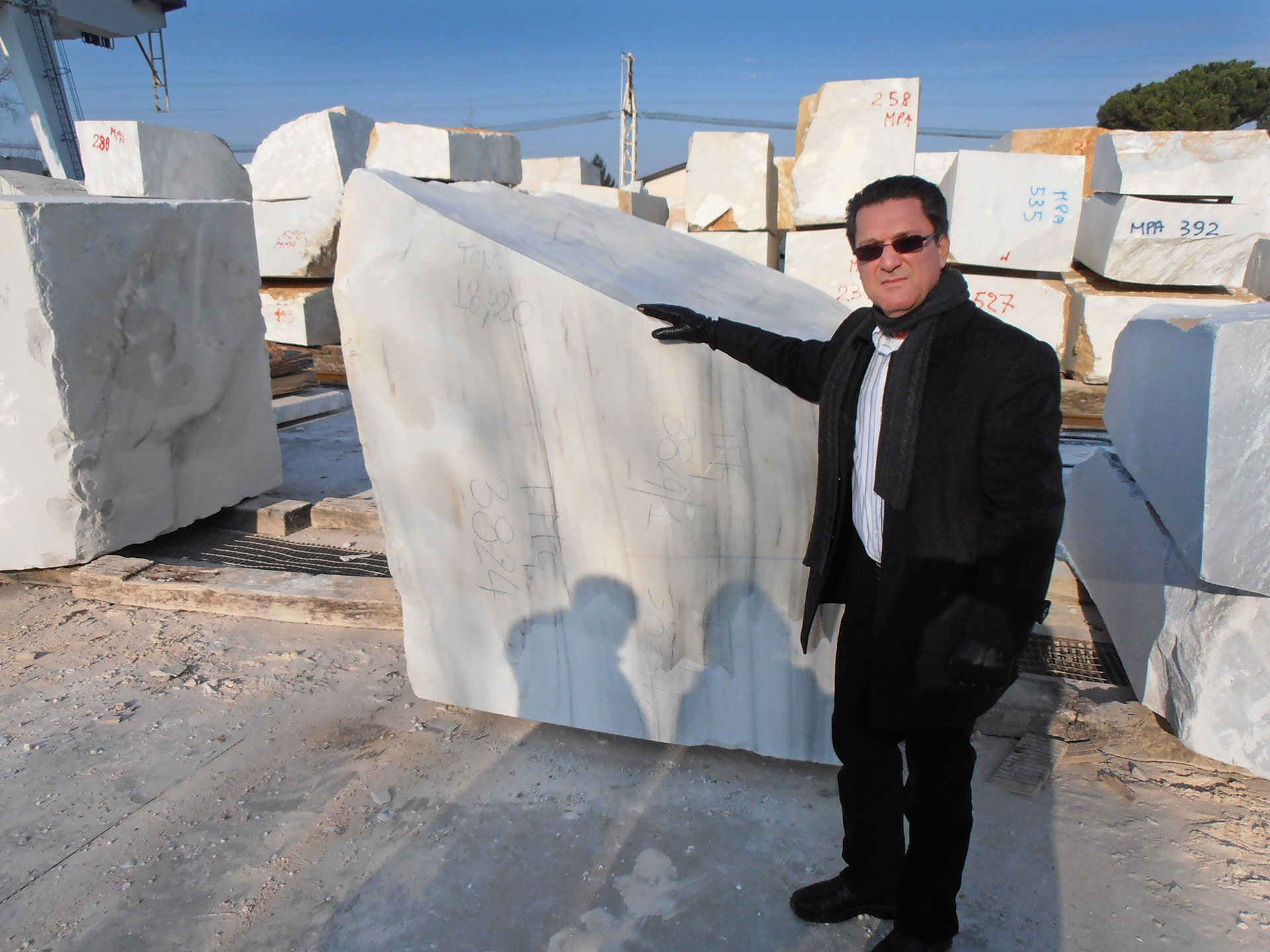 Jose Ubilla, owner of Real Stone & Granite in Fort Pierce, inspects marble at a quarry in Italy during a recent buying trip. In addition to his stone business, Ubilla also co-owns a 400-acre banana plantation in his native Nicaragua.

The journey from a turbulent Central American country to the U.S. turned a farmer into a manufacturer to benefit people in both countries

Many people know Jose Ubilla as the owner of Real Stone & Granite Corp., one of the largest stone businesses on the Treasure Coast.

But what they may not know is that he has never strayed far from his farming roots in coastal Nicaragua. He continues to own and operate his family’s banana plantation, Coquimba, which has been in the family for four generations.

Ubilla, 58, grew up in the town of Chinandega in the agricultural heart of Nicaragua, where sugar cane, bananas and citrus were the primary crops. He and his parents and nine siblings lived next door to his maternal grandparents, who had a 300-acre farm that primarily grew cotton during a time when Japanese demand for the product was steadily increasing. Ubilla’s father, Pablo, who died when Ubilla was 11, owned a cotton mill and also managed a portfolio of farms.

In the mid-70s, Ubilla’s widowed grandmother rented her farm out under a profit-sharing arrangement to the Dole Food Company, which grew bananas on her land.

Just before Nicaragua plunged into civil war in 1979 and the Sandinistas overthrew the government of Anastasio Somoza, Ubilla left for the United States, first to study English in Glenside, Pennsylvania, and then to attend college at the University of Southwestern Louisiana, now known as the University of Louisiana at Lafayette.

“I went to school for agricultural economics and then the revolution came in 1979, the Somoza government was ousted and my whole family became exiled,’’ he says.

CHANGE IN PLANS
The war rendered him a man without a country, and he wouldn’t be able to return to Nicaragua for three years. With no money to continue his education, Ubilla left college in his sophomore year and worked various jobs, including bartending, for several years before heading to Miami in 1984 to work for his brother, Pablo, an architect who also had a tile contracting firm. Tile was just becoming popular as a flooring choice, competing with vinyl, carpeting and wood.

“He taught me how to read plans and the basics of the business,’’ Ubilla says of his brother. “I [first] worked with tile, but when I started working with natural stone, I discovered that would be my passion. I loved the nature of the product.’’

Ubilla later worked with a small company owned by a stone mason from Italy. “We were doing churches in Coral Gables and things like that. I was his helper, his translator. He didn’t speak English. He was a real craftsman. He didn’t want to grow the business, so I branched out on my own and started a company called Interstone in Fort Lauderdale.’’

Ubilla found himself working more with commercial tile in custom homes than with the natural stone he preferred. “I was working endless hours. We were laying it, cutting it, designing it, templating, sourcing, whatever it took.’’ He married Liliam Duque, a native of Venezuela, in 1986, and they had the first of their three children a year later.

He initially lived in the United States on a green card, a permit allowing a foreign national to work permanently in the United States. “I decided to become a citizen when I participated at my son’s kindergarten graduation and saw him say the Pledge of Allegiance with his hand on his chest.’’

DESIRE TO GROW
By about 1989, Ubilla dissolved Interstone and ran a company called Marble and Granite Crafts in Delray Beach until 1993, when he started Real Stone & Granite in Palm Beach County. At the same time, Ubilla went back to school, enrolling at Florida Atlantic University in 1996 and taking mostly weekend and night classes before earning a degree in business administration in 1999.

“I was running a small business successfully but had the desire to grow,’’ he says. “And since I lived literally across the street from FAU, I had to do it. I did it just to finish college and have my young children live the experience with me. I am happy that I did.’’

He moved Real Stone to St. Lucie County — to its current location on Market Avenue in Fort Pierce — in 1999 with the idea of serving the market from Orlando to the north and Palm Beach County to the south, offering natural stone and granite for flooring, countertops, columns, staircases, pool decks and other projects.

The company grew as expected, posting its best volume year in 2006 and employing about 70 people. And then came the 2008 recession, which Ubilla remembers pretty much choked off 80 percent of the housing market.

“We downsized dramatically. We went back to the trenches, had major cutbacks, negotiated with banks, restructured loans and I literally had to borrow money from family friends to keep it going.’’

The company never resorted to filing bankruptcy and emerged as a leaner outfit serving a smaller, more selective clientele, focusing on the Treasure Coast and northern Palm Beach County. Ubilla himself went from driving a BMW to a Toyota Prius hybrid during the recession and to a Toyota Avalon hybrid today.

“We learned a lot during the recession from 2008 through 2011,’’ he says. “We now work more efficiently and with better technology than in those days. I am very proud to be the leading fabrication company on the Treasure Coast.’’

Besides its 21,000-square-foot manufacturing facility and showroom in Fort Pierce, the company also has a store at 1420 S.E. Federal Highway in Stuart.

Today, Real Stone employs about 35 people on the Treasure Coast and another 10 people in Nassau, Bahamas, a market that was not hit as hard in the recession. Ubilla was able to ship materials out of the Port of Fort Pierce to the Bahamas. “It was like having our own truck going to Nassau twice a week, 15 minutes from the shop. It would go to the Bahamas on container ships.’’

Two of his brothers, Alejandro and Gerardo, work with Real Stone. Alejandro, with him since the first day, oversees operations while Gerardo is in the field working with digital templating.

BACK TO HIS ROOTS
During the heady days of 2006, Ubilla was also able to acquire the family’s banana plantation in Nicaragua, which had been in his family over two centuries. When Ubilla’s grandmother died in 1986, the land went to his mother and her four siblings. “There was a very special emotional attachment to this land where I grew up.’’

With his mother’s siblings eager to retire, Ubilla and his brother Eduardo developed a plan to buy them out. “It’s now just the two of us, and we have owned it for 12 years now, and we have made it the only banana plantation in Nicaragua that has fair trade certification. It’s very important.’’

The certification, from Fairtrade International, means that the plantation meets working condition requirements, provides medical insurance to workers and families, has minimal use of chemicals, emphasizes soil conservation, keeps part of the land in its natural habitat and protects water resources.

Today, the farm employs 200 people and has grown to 400 acres, producing Cavendish bananas under the Fairtrade International label. “They go to international markets that demand a higher quality, and the consumer knows that a percentage of the proceeds goes directly to the workers, and we’re actually subject to being audited.’’

Ubilla’s mother, Esperanza, 89, still lives in Nicaragua, along with five of his siblings, and he visits every couple of months. The visits allow him to stay close to the plantation’s operations.

He says most of the plantation’s bananas now go to Europe. “Even though we are the smallest grower in Nicaragua, we have the best quality. Our product goes to an affluent market where the consumer wants a higher quality. When they see the fair trade label, they’ll pay a little more because they know the workers at that plantation were being treated honestly.’’

When Coquimba began exporting to Europe in early 2017, it quit selling to Chiquita Brands International. The plantation sued Chiquita for non-payment of 10 containers, and Chiquita countersued for breach of contract. Ubilla says the case is still pending.

ANOTHER CHALLENGE
Weathering the political situation in Nicaragua is also challenging, Ubilla points out. Today, the country remains under the leadership of Daniel Ortega, the leader of Nicaragua’s left-wing Sandinista revolution. Ortega was defeated in the 1990 presidential elections, but after denouncing his communist roots and saying he would seek foreign investment to ease widespread poverty, he returned to power in 2006 and is currently serving a third consecutive term. Large-scale protests against his presidency have led to hundreds of deaths this year.

“I have never sided with any government in Nicaragua,’’ Ubilla says. “I do believe that being the second poorest country in Latin America, there’s a lot to do for the country. Even before this current political situation came about, my primary goal was to improve the quality of the lives of the people who worked in the business in which I was investing. I really hope that some kind of resolution will take place in the very near future. The country is in desperate need of peace and prosperity.’’

While Ubilla hopes to keep the plantation in the family, the succession plan for Real Stone is not so apparent. None of his three children have followed him in the stone business. Donoso, 31, is in information technology in Tallahassee, Alonzo, 29, is an electrical and mechanical engineer living in Port St. Lucie and twin Mariana works for the Hyatt Corp. in Coral Gables.

Like the Italian mason he once worked with, Ubilla wants to pass his knowledge about the natural stone business on. “I want to teach others. I want to make this industry and this company a continuing source of work for the generations to come.”