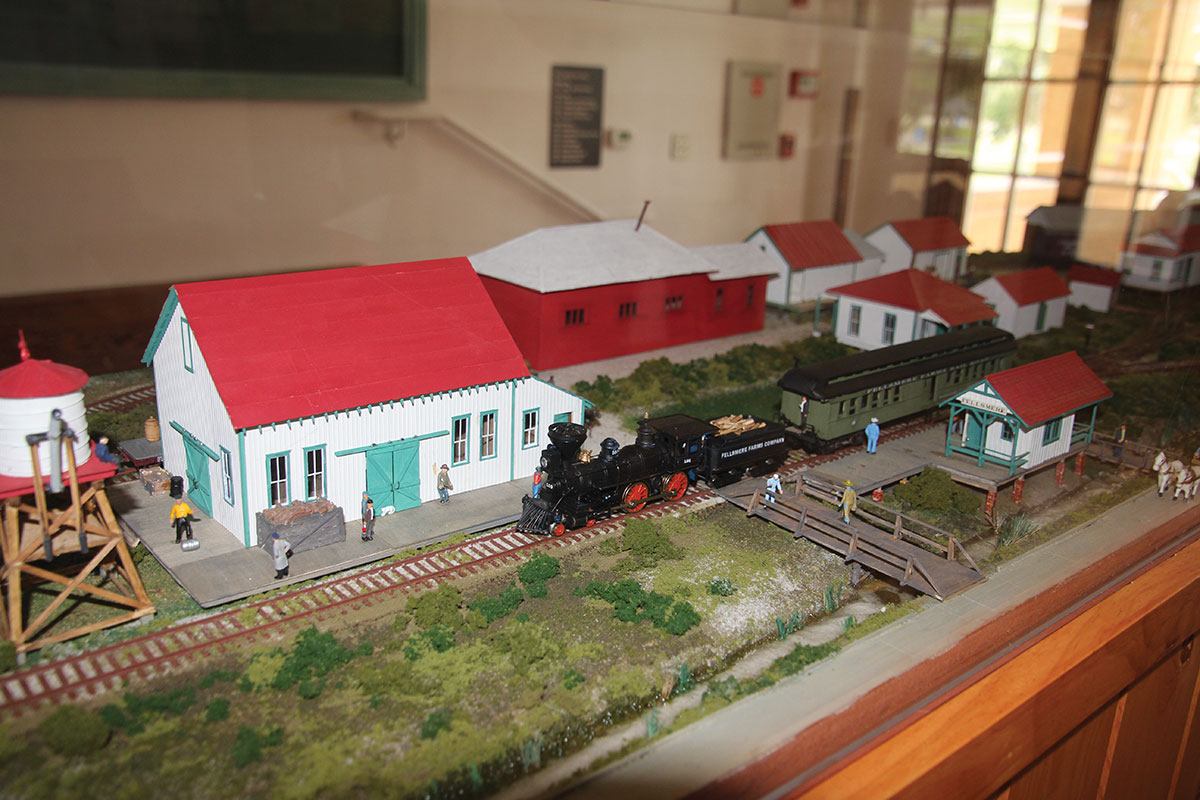 A diorama of the future Historic Railroad Village in Fellsmere is located in the foyer of the Fellsmere City Hall. CHRISTINA TASCON PHOTO

Plans for an historical village on track in Fellsmere

Once a boom town on the cusp of becoming one of Florida’s biggest communities, Fellsmere history credits its stunted growth to a two-day, 8.8-inch downpour and a lack of drainage canals. This engineering flaw dashed the hopes of developers looking to get rich from those who sought a new life on the state’s popular east coast.

Now a sleepy, close-knit town, Fellsmere is hoping to revive an interest in its past glory days with a recreated historical village anchored by the last Foremen’s House that has stood for the past century next to deserted railroad tracks — a remnant of a bustling real estate investor’s dream town.

A diorama of the village circa 1920, created meticulously by Nat Huggins with detailed accuracy provided by Fellsmere’s historians Rich Votapka and Clarence “Korky” Korker, is on display in the city hall lobby. Hopefully, the entire village will be completed in five years. The first phase of the city’s journey began with the relocation of a Section Foremen’s House — the last standing railway structure — which has been moved to a spot north of Maple Street, four blocks west of the original location.

They and council members made sure the village could fund the project by applying for and being awarded three grants — one for rebuilding a replica of the train station; a second to preserve the Foremen’s House, and a third to build the rest of the village.

Mathes said keeping to the grants’ regulated time frames has been the biggest challenge. In the end though, he feels that the project, which is beginning with the Foremen’s House, will help preserve the village’s history.

“Having this one real historic building provides great character to the larger village, which will be made up of recreated properties,” Mathes said. “This site is recreating the train-related history in Fellsmere because it is what gave the area its lifeblood.”

The Foremen’s House stood faithfully on its original site for more than a century, northeast of the former depot owned by the Fellsmere Railroad, which was later known as the Trans Florida Central Railroad, on an old right of way. It was designed as a duplex to house the two foremen who were in charge of dual rail gangs that maintained the tracks. It was abandoned by the railroad after the train stopped running in 1952 and sat empty for many years before becoming a residence, which was vacated in 2013.

The interior has remained relatively the same other than the addition of a bathroom. After the move, the building was opened up and the original painted beadboard walls and dark Miami-Dade pine floors revealed glimmers of its former stark simplicity.

Korker, 91, said many of the older structures in town used the same construction, which was built to last.

“My in-laws had a 101-year-old house in Fellsmere that they had until it burnt up in a fire a year ago,” Korker said. “There was not a bit of creaking and built solid with Miami-Dade pine. When that stuff dried and got hard you couldn’t even drive a nail in it.”

The Foremen’s House is creak-free and solid, but subsequent tenants did leave their marks.

An older sewing machine sat in the center of one room and dishes were piled high in the rough kitchen. An outdated bathroom took up one of the rooms, which was a corner of the former porch.

There were porches in front and back where most likely the foremen enjoyed an occasional breeze and a smoke at night. Surely an occasional guest waiting for the train sought cover under the overhead while listening for the sound of the approaching train.

Cleanup was fairly swift after its move. Debris was removed and the bones of its former self showed through as the walls and house resonated with history and a simplistic charm. There are no plans to dress it up as a cute cutout home of the day, since that was never its use. To keep it as accurate as possible, only items found in a working rail home will be included.

“Next month we are going to start on a 5-acre lake to be built off the back so it will have water all around,” Briggs said. “To restore the original house,we will have to put a porch on the front and the back and remove the bathroom since all houses back then used outhouses.”

Many people do not know that sleepy Fellsmere was in the running to be Indian River’s county seat when the area broke away from St. Lucie County. It was the second largest city after Fort Pierce in early St. Lucie history. And because of its rapidly growing population and development, Fellsmere was on the fast track to be a big little town. Literally.

E. Nelson Fell, born in New Zealand and educated in England, was a creative businessman who worked around the world. With a background in mining and land development, he founded Narcoosee in the 1880s when his family bought 12,000 acres. His brother, Arthur, wanted him to develop the town with people of their own breeding and social status from England. As many of his compatriots moved to the area, central Florida suddenly was infused with British citizens.

After consecutive freezes in 1894 and 1895 destroyed citrus crops in Narcoosee, Fell left to explore mining ventures in Canada and Russia until 1908. When he returned, he looked south to Fellsmere for his next big project, Fellsmere Farms.

He bought 118,000 acres of swampy, muck-filled land, drained it and sold it to investors as farmland and homesteads in 5- to 40-acre tracts. Fellsmere Farms was not a novel idea. The same had been done in Narcoosee, Kissimmee and other areas, including drained parts of the St. John’s River in nearby Indian River Farms west of Vero Beach.

“Agents traveled all over the country from New York City and Chattanooga to attract people to come down to Florida because of the weather and what you could grow here,” Votapka said. “They could see all these fantastic vegetables growing, 65-pound watermelons, 22-inch celery and sugar cane 15 to 16 feet high. They made an impression on what they could grow on this rich, organic, fertile soil.”

“It was a time of optimism,” Nunemaker said. “It was a bustling little city and now a 100 years later we are starting that again.”

Fellsmere proper was just 1 square mile but it grew to incorporate many amenities, including a biweekly newspaper, power plant, two large hotels, two grocers, a bank, four churches and the Dixie Playhouse that featured musicals and silent movies. More than is in the Fellsmere of today.

Fell’s daughter, Marian, even traveled to Fellsmere and helped build the county’s first library with money she earned translating Russian plays into English.

There was plenty of entertainment for the visitors who rode the train from Sebastian to view its demonstration farm (like a model home of today) but a lot of the land was purchased sight unseen by those outside the state.

THE END OF THE BOOM

Unfortunately, Fell hit a wall when the government began investigating fraudulent land sales in Florida. The state was challenged by land development involvement and swampland deals were investigated. Although Fell was not involved, investment sales began to slow.

The final nail was the storm that lasted two days, July 31 and Aug. 1, 1915. Although the company built relief drainage, the canals were not enough to accommodate the water that filled the fields and plots with almost 9 inches of rain.

Vero Beach had the advantage of drainage flowing into the Indian River Lagoon, so it was able to recover. There was an economic downturn in 1915 plus many absent landowners had bought the land on credit. Finances made them abandon their claims and the cost of re-draining the farmland was too costly for Fell to begin again. After several years of struggle, Fellsmere Farms was bankrupt and Fell moved to Virginia.

Fellsmere has always maintained an old historical town charm. Some may say it is underdeveloped with its one main road and lack of chain stores. And there is not a Starbucks in sight.

However, residents, visitors and nearby city dwellers from Sebastian, Vero Beach and Melbourne brag about its historical architecture and peaceful ambience. Even in discussions about the railroad project, Nunemaker, Tyson and Mathes see the recreated village as a place for residents and history buffs to wander through its new village and sit by the lake. Plans to bring an old caboose or train car heighten its delightful connection to the past but there are no thoughts for the village to become a Disney duplication.

“We have the old-town district and we keep to that,” Tyson said. “No one can come in here and build some outlandish building and it has to fit into the architectural design we have established as the vision for our future. We think that the village will be a historic celebration of Fellsmere and the town will continue to grow around it.”

The city council has been guided by the belief that most of the local citizens do not want to see overwhelming growth but allows the landowners to develop their land in the future.

“For us, the new village is symbolic of taking that history and all of us reliving it,” Nunemaker said. “It’s a unique opportunity for us because you look at places like St. Augustine and they are fortunate to have so many old buildings but for us we just have a handful. People now buy into our vision so much that they are even looking into donating buildings to us or bringing us old artifacts.”

“I am a firm believer in keeping history alive to see what their ancestors went through; what hardships they had to survive and primitive tools they used,” Votapka said.

“I have to give kudos to our city council for their support of historic preservation and without their guidance and their policy direction none of this would be possible,” said Mathes.