Spoto’s Oyster Bar a gem on the half-shell 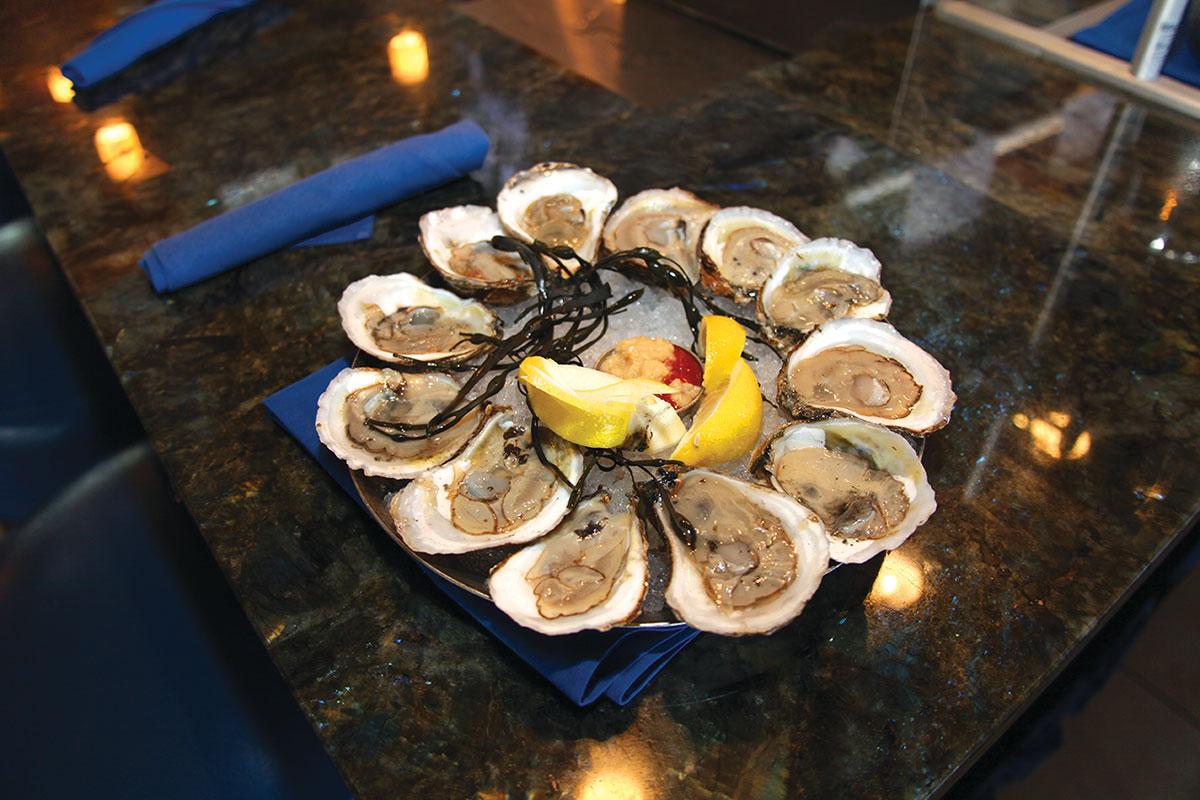 Fresh Blue Point oysters from Long Island, N.Y., a restaurant specialty, are ready to be savored by patrons at Spoto’s Oyster Bar situated on the St. Lucie River.

Located next to Stuart City Hall, Spoto’s Oyster Bar was remodeled and reopened in 2013 by John Spoto, who runs a second restaurant of the same name in Palm Beach Gardens. Once considered for demolition by the city to be replaced with a hotel, the building has been home to a half-dozen restaurants since the late 1970s, when it first opened as Lori’s Landing.

The Water Bar on the eastern riverwalk is a breezy place to enjoy the river, protected from pouring rain. If you find it a little warm down below, the upstairs restaurant with sushi and raw bar is nice and cool, with even better views of the St. Lucie River. During renovations almost three years ago, the downstairs bar was moved, so now all patrons sit looking at the river.

FOCUS ON SHELLFISH
A former CPA with an MBA who was a vice president of Wells Fargo Bank on Palm Beach, the 33-year-old Jordan has had a meteoric rise from the bottom of the culinary profession to the top of his trade. Instead of attending a culinary school, Jordan began in the rear kitchens of the World Marriott Orlando, one of the largest hotels in Central Florida. “I had taught myself how to cook in college,” he says. “I went from peeling potatoes and making peanuts to running two kitchens.”

Jordan likes to chat with customers and accommodate people with special circumstances such as allergies. “Our staff is well-trained,” he says. “John Spoto is hands-on and he is committed to the restaurant. We try new menu items to see what will work and that allows me to be creative. We offer only fresh seafood flown in, nothing frozen, with a focus on shellfish – oysters, clams, mussels and live Maine lobster. We have a New Orleans influence with inspirations from different global cuisines such as Asian and French, but we offer the flavors that will accentuate fresh seafood. We have nightly specials to offer a different experience. A lot of people come in and order the same dish every time because they love it.”

Spoto’s menu is a good read. Sushi and sashimi are offered 17 ways. There are 10 different combinations for oysters and clams. All but four of the 22 appetizers are seafood dishes. Chicken, salmon, shrimp, tuna and mahi can be added to six different salads. Even if you are not a seafood fan, there are other options including chicken with artichokes over a bed of linguine, chimichurri chicken or a Thai curry rice bowl.

The Dragon Roll, magnificently presented, looks like a lobster about to crawl off the plate. A meal by itself, the sushi lover will love this dish of shrimp tempura, smoked eel, masago, cucumber and asparagus, topped with sliced avocado and eel sauce.

HEARTY ENTREES
The bouillabaisse entrée features a hearty tomato-based broth with one-half Maine lobster, clams, mussels and fresh fish, and tastes like the French dish made in Marseilles.

Winning the Best Dessert award in the 2015 Taste of Stuart was Spoto’s original Grasshopper Cheesecake, a delicious, but not too rich, mix of cheesecake, crème de menthe and Cool Mint Oreo cookies, with ganache on the top and bottom.

For the perfect beverage to go with oysters, try the Spoto’s Cup. It is a new twist on a drink developed in 1840 by a mixologist at a London oyster bar. The balanced taste is the end result of a careful concoction of Pimm’s No. 1 liqueur, gin, ginger beer, pomegranate, pureed strawberries, cucumber, mint, orange and lemon.

Having read more than 100 books on mixology, bar manager Bill Butler probably knows more about creating cocktails than 99 percent of bartenders, but he scoffs at the idea that he is a mixologist.

“There are probably 10 mixologists in the country,” Butler says. “And they have all written books. You have to learn how to balance everything like the acid and the base. Sugar in a drink is like salt on food. If a drink is too sweet, it has gone too far. You will switch to something else. And no matter what show you put on, the taste of the drink will sell it by itself. We like to take a classic drink and give it a modern twist.”

While mixing five signature drinks, Butler explains why the restaurant will soon host Pre-Prohibition Cocktail Hour. When prohibition came, bartenders, most of whom came from several generations of mixologists, either went back to Great Britain or found other work. “When prohibition was repealed, no one knew the real recipes for the original drinks so what we have today is a different Manhattan than the 1919 recipe,” Butler says. “People can sit at the bar and learn how the original drinks were made.”

“Probably the most complex drink on the planet” is le Vieux Carre, which means old square in French, says Butler. This is an after-dinner drink and you are only allowed one unless you give up your keys. It has smooth taste “with complexity” for a mixture of Knob Creek 100 proof rye whiskey, Benedictine liqueur, Remy Martin cognac, Martini and Rossi vermouth and three types of bitters.

A recent daily special was the refreshing Blood Orange Crush, made of blood orange vodka, Crush soda and orange juice with blood orange as garnish. The Eastern Tour is an interesting combination of gin from England, Licor 43 from Spain, Campari from Italy and lemon. You really can’t taste the gin. Ladies like the Hibiscus Royale, consisting of brut champagne with St. Germain elderflower and a bit of wild hibiscus flowers in syrup. For suds lovers, Spoto’s has 40 different craft, foreign and domestic beers, bottled and on draft.

Ned and Joyce Kenna stop by Spoto’s at least once a week. Kenna ran the Triangle Bar just across the railroad tracks for 33 years and the Casablanca restaurant-nightclub in Port Salerno for seven years. “We have been coming here since John (Spoto) opened,” says Kenna. “We’ve tried all the appetizers and they are first class. He has great conch chowder,” says Kenna. “They are very good hosts and he treats everyone well. You can’t beat the ambience and you can’t beat the view.”