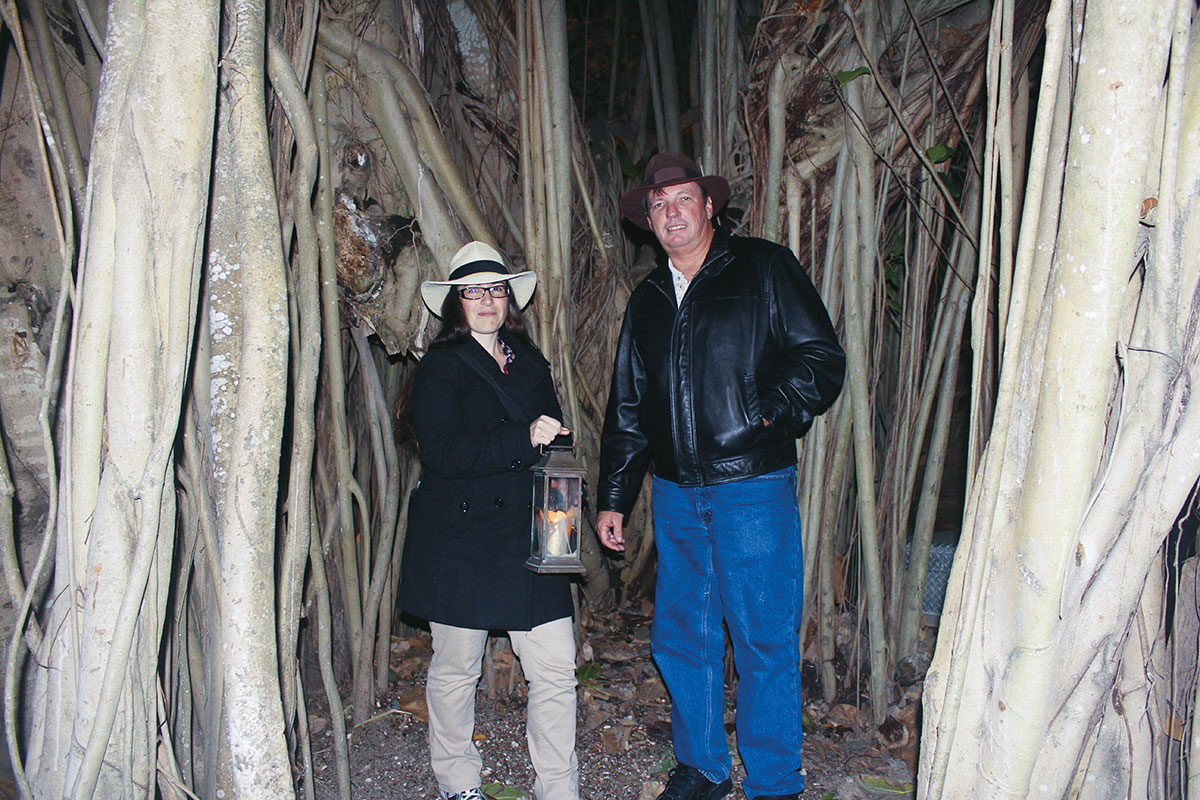 Rebecca Salinas and Tom Adams stand in the banyan tree at the front of the Driftwood Inn which, is supposed to have registered high on paranormal scales. CHRISTINA TASCON PHOTO

Walking tour pulls back the curtain on Vero’s haunted past

Vero Beach’s Ocean Drive has its share of things that go bump in the night.

Want to feel the hairs on the back of your neck stand up or a hand brush your shoulder as you listen to ghostly tales of long dead pirates, bootleggers and an eccentric pioneer of Vero Beach?

Tom Adams grew up with a ghost or two in his family’s turn-of-the century home on Indian River Drive in Fort Pierce. In fact, the bizarre ethereal visits gave him a lifelong interest in ghosts and his love of history fueled his passion for the past. Now, he and his girlfriend, Rebecca Salinas, host Historical and Ghost Walking Tours along Ocean Drive where he entertains, educates and adds a richer dimension to local history.

“It started from an idea because of my interest in history, which I got from my father,’’ said Adams, 57. “I have gone on many ghost tours and I have always found them fascinating because that is where you find out the back stories of history. Everybody can read a history book and get the basic facts but this is where you find the underneath, the little secrets.’’

MUSIC IN THE AIR

Picture a historical home along a quiet stretch of Fort Pierce’s Indian River Drive winding along the river and the piano can be heard playing inside. With heart racing, you run through the door trying to catch a glimpse of the musical interloper trespassing in your parlor. No one is there.

This is what Adams, the father of two boys, recalls and had described to him by many others who visited the home where he has lived since he was born in 1959. The house was constructed in 1901 and his grandparents Ruth and [Thomas] Stanley Kirby purchased it in 1925 and shared the home with their family until they died.

“We think the incidents were ghostly occurrences but whether they were real or not I don’t know,” Adams said.

His grandmother, Ruth Kirby lived with the Adams family and loved playing her grand piano. She was good enough to play for Ed Sullivan when she was visiting New York. Adams said that after she died in 1978 many people still heard what sounded like piano music coming from the house.

The Adams family included his parents, Nan Eff and Edward Lawrence “Larry” Adams, an older brother Larry and a sister Sue. The elder Adams used to write a column for the Fort Pierce News Tribune and worked at the post office. A graduate of the U.S. Naval Academy, he met his wife at a USO dance while at the naval station in Fort Pierce during World War II. The family lived with Nan’s parents until the couple died. That was when the family along with friends and neighbors began seeing some curious things happen. All of the little incidents were completely benevolent but still had them shaking their heads, especially young Tom.

FOOTSTEPS ON THE STAIRS

“The biggest incident is when my mother and I experienced something together one time. I was about 9 or 10, I was upstairs in my room and my mother was in her room down the hall, my father was still working at the post office and was not expected home until 11 o’clock that night,” he said.

“Around 9:30 p.m., it sounded like the back door opened up, someone walked in with heavy footsteps like a man and both of us went to the top of the steps because we thought it might be my dad. We heard the keys drop on the desk in the hall as clear as day and then heard the footsteps coming up the steps one at a time.

“My mom was yelling for my dad but there was no answer. We could hear the footsteps coming towards us until they were like two feet away and then they completely stopped and no one was there. When my dad showed up from work about an hour and a half later he said he had never been home until then. That was the most intense.”

His mother said that was the same ritual that her dad used to do so they believed it was his spirit just repeating an ingrained pattern he had followed so many times before. The family never brought in a medium or anyone to read the house for spirits but they just felt a presence on occasion and so did others.

“There was always a door downstairs where my grandmother kept her bookcase and she always wanted the door kept closed. You could see that the door would close on its own like in a lot of older houses but occasionally you saw it close very slowly and the door knob click in like someone was doing it by hand. It did not scare us badly but you did sort of get an exhilarated feeling. Later I would scare my younger nephews and nieces and tell them the stories.”

After a career with the Indian River County Lifeguards and working as a substitute teacher while earning his degree at Barry University, Adams combined his love of local lore and historical research and began the walking tours with Salinas in 2014.

Salinas, a technical assistant librarian at the Indian River County Main Library, helps Adams research information and is a storyteller on the tour. She said that she feels they are doing a community service by sharing local history with others.

Eventually the two would like to expand the tours to Melbourne, Sebastian, where Adams lives, and Fort Pierce, which are also rich in history and folklore. They have become so popular that some tours have up to 25 guests and are scheduled year-round, depending on weather.

“I will probably go twice more this year with visiting friends since this is a fun thing to do with them,” Judy Montgomery said. “The knowledge is on point and we enjoyed all the little nuances. We were really surprised about the ghostly bootleggers seen behind the stores in the alley. I think that is why we liked it, it is the serious combined with the amusing.”

The subjects covered are in the history books, but even most locals have not heard them before. They cover the capture of Jonathan Dickinson by the Ais Indians near Riomar; the Ashley Gang that ran bootleg liquor up the coast; the sinking of the Breconshire, a British steamship that sank off Humiston Beach and stories about reported hauntings by pioneer Waldo Sexton.

At the Driftwood Inn, where the tour begins and ends, people have captured orbs in their photos and some professional paranormal hunters have had their machines go crazy with readings by the banyan tree at the entry and a child’s sarcophagus Sexton hung by the restaurant Waldo’s.

“I enjoyed both parts, the ghost stories as well as the historical,” tourist Mary Blaine said. “I learned a lot of things about this area that I did not know before. Compared to other tours they were very engaging and they had a great grasp of the material.”

Local resident Liz Mayo took the tour with her mom and a friend visiting from Rhode Island.

“We had tons of fun and we did not know much of what they told us,” Mayo said. “It was a nice night out with not too much walking but when it got to that banyan tree at Waldo’s we were all wigged out and my friend would not even go in that tree!”

People have said that when they listened to Sexton repeat one of his stories they would notice the stories sometimes changed. In defending his tall tales he would often say, “I would rather people think me a liar than a bore!”

Do you believe that the spirit of Sexton moves the rocking chairs at the Driftwood or dead members of the Ashley Gang load bottles of bootleg whiskey down dark alleys behind the elegant shops on Ocean Drive? Have you ever heard the moans of the thousands who died when 10 Spanish ships filled with $14 million in treasure sank during a hurricane when you walk the beaches off the coast of Riomar before an oncoming storm?

For Adams and Salinas, they would rather get it right. Approximately 95 percent of the information on the tour is researched to be true, the rest is folklore or reported sightings and is subjective to whether one really believes in ghosts.

WHERE: Tours meet on the sidewalk in front of the Driftwood Inn Resort, 3150 Ocean Drive, Vero Beach.

WHEN: 7:30 p.m. Friday and Saturday and run approximately 90 minutes. Please arrive at least 15 minutes in advance, especially if you have not prepaid.

RESERVATIONS: Not required, but highly suggested.

TICKETS: $12 for adults and $5 for children ages 5 to 12. Tickets are not required for children younger than 5. You may pay before start of tour on-site or go to www.vbwalkingtour.weebly.com. For more information, call Tom Adams at 559-5966 or Rebecca Salinas at 205-7527.

• Wear weather appropriate clothes for along the ocean — it can be quite breezy.

• If you have trouble seeing in the dark, you should bring a small flashlight.

• Bottled water or an umbrella is suggested.

• Parking is not allowed in Driftwood’s lot, but there is plenty of parking along Ocean Drive or on the nearby side streets.

• Tour may be canceled due to inclement weather.