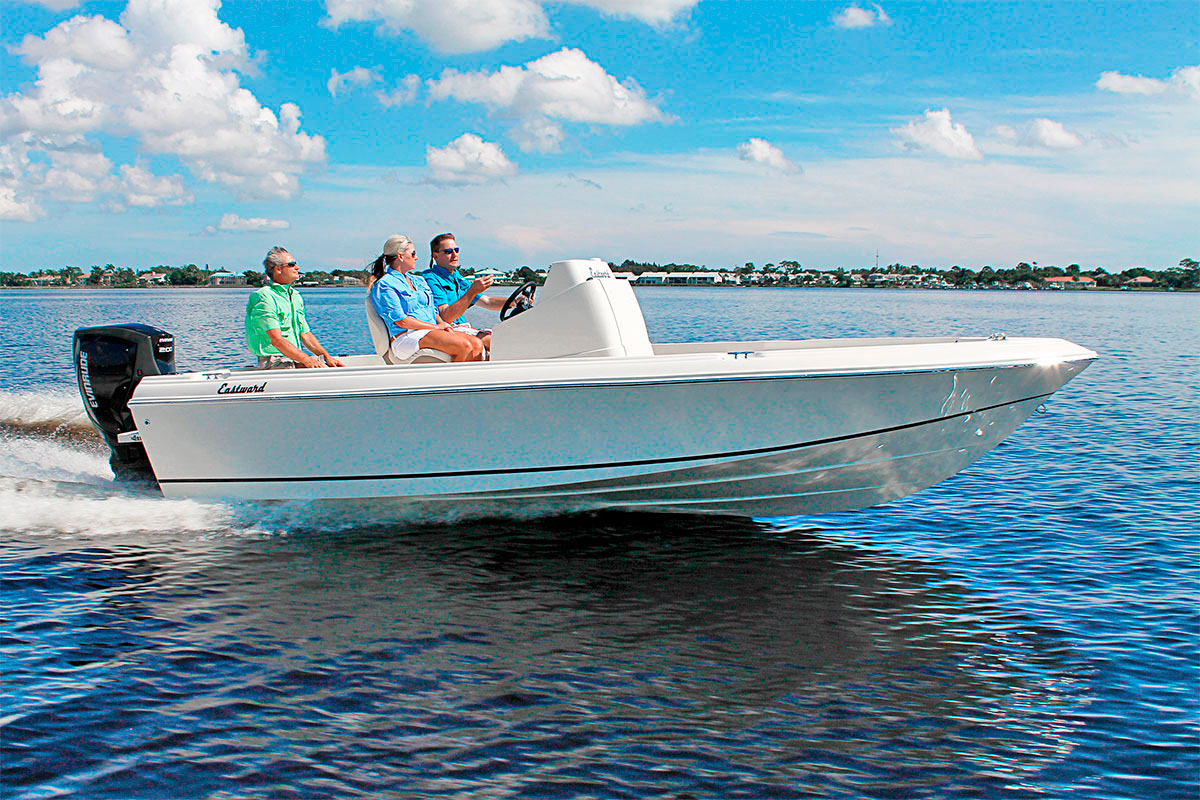 With its high angle of entry and running pad on the keel, the Eastward Coastal 2200 planes out of the water, offering much better gas mileage. EASTWARD BOATS PHOTO

After building 5,500 boats and field testing more than 300 different models, David East has developed the perfect design for a hull that performs equally well in rough seas and calm bay waters.

The former owner of Twin Vee Boats, East has begun production of the Eastward Coastal 2200 in Port St. Lucie with a goal of just 24 boats a year. The orders are coming in and East is one behind after a customer went for a sea trial, buying the demo craft right out from under him.

“We are bridging the gap between a bay boat and an offshore center console,” said East, who actually had engineering plans drawn “for the first time ever. We took a little bit of everything with the least amount of compromises.”

After hosting a TV show and testing more than 300 boats over four years for Best Boat magazine, East was able to incorporate the best technical and design elements into the custom boats — outfitted to the individual owner’s needs.

At just 22 feet, Eastward boats have the deck space of a 26-footer because of the 8½ -foot beam and narrow gunwale rails.

“Bay boats aren’t good offshore and they don’t run as well,” East said. “We have the shallow draft of a bay boat (15 inches) and we are able to go offshore. Our boat is not a compromise. We do them both real well. With our hull design we fill that gap. This boat is for the guy who wants to do both.”

The 44-degree dead rise angle of entry into the water allows for less drag and more speed, but the boat is still stable because of its wide beam. If the boat must be kept in the water, the motor can be tilted to avoid corrosion.

With an Evinrude 200-horsepower motor mounted on a locally made Armstrong bracket, the Coastal 2200 boasts the best fuel consumption of any comparable boat on the water, East said. “The boat will cruise at 36 mph, getting 5 miles per gallon. At wide open 52 miles per hour, we get 2.8 miles per gallon,” he said. “No one can touch that. It is a fun boat to drive.”

Storage is everywhere and functional with room to lock up 10 fishing rods. The step-in center console is large enough for a head, which can’t be done with almost all bay boats. Every boat is prewired for a trolling motor. Eastward boats can also be built with dual consoles or a right-side console.

There are dual live bait wells with an aeration pump, but the Eastward boats offer a unique accessory package to simplify a day of fishing. Every owner receives three heavily insulated soft coolers specifically designed to fit in the storage compartments. It is a simple, yet brilliant concept. One cooler is for food and drink, one for baits and the third for caught fish. At the end of the day, you take the three coolers and walk away from the boat.

For safety reasons, five and no more than six people should be out on the Coastal 2200. Three sit comfortably in the rear and two at the controls. When you get to where you are going, there is plenty of room to walk around, enough to walk to the bow of the boat without having to turn sideways.

Skip Chandler has fished offshore professionally for 15 years and was sponsored by Twin Vee and East. He brings his experience to the rigging of the boats and has been with Eastward since hull No. 1.

“We are meticulous and we have some redundant features you won’t find on other boats,” said Chandler, a St. Lucie County firefighter. “We have two bilge pumps instead of one. We have a 72-gallon gas tank and a reserve tank. We put foam not just in the bottom of the boat, but also on the sides. We have an amazing amount of storage. This is a great all-around boat. The running pad lifts the boat farther out of the water and it is more economical on fuel.”

The hulls and consoles are manufactured in Fort Pierce and then trailered to Port St. Lucie where a team of four off-duty firefighters complete final assembly. It is an arrangement that suits their schedules and the company’s part-time needs. Almost all of the parts for the boats come from the Treasure Coast or elsewhere in Florida, East said.

Advantages of the outboard bracket include less draft and noise, more cockpit space, better performance with less drag. Backing down is easy with no worries of water swamping the rear. The bracket also has a ladder for use as a swim platform.

In May, the Eastward Boats show will head west on a six-day, 500-mile trip from Stuart across the Okeechobee Waterway to the West Coast, down to the Keys and back up to Stuart. With a camera crew in a second boat, the goal is to focus on different species of fish caught and beautiful Florida scenery. They will work with local guides and some footage will be streamed live, hoping other boaters can use the videos to plan their own trips. East plans to use his old TV crew to stream the video on Facebook Live and produce a three-part, 90-minute show.

The Coastal 2200 sells factory direct (no dealer middlemen) for around $40,000. As a “boutique dealer,” East said he enjoys giving individual attention to each customer.

“Nothing is lost in translation,” he said. “People like to come out and see the boat being built. We just made some changes for some electronics. You can’t do that in a factory environment.”

When he is not building or selling boats, East likes nothing better than fishing for yellowtail in the Florida Keys with his wife, Cheryl. The couple have three daughters in St. Lucie County who are nurses including one who has a world record for a red grouper caught when she was 14 years old.