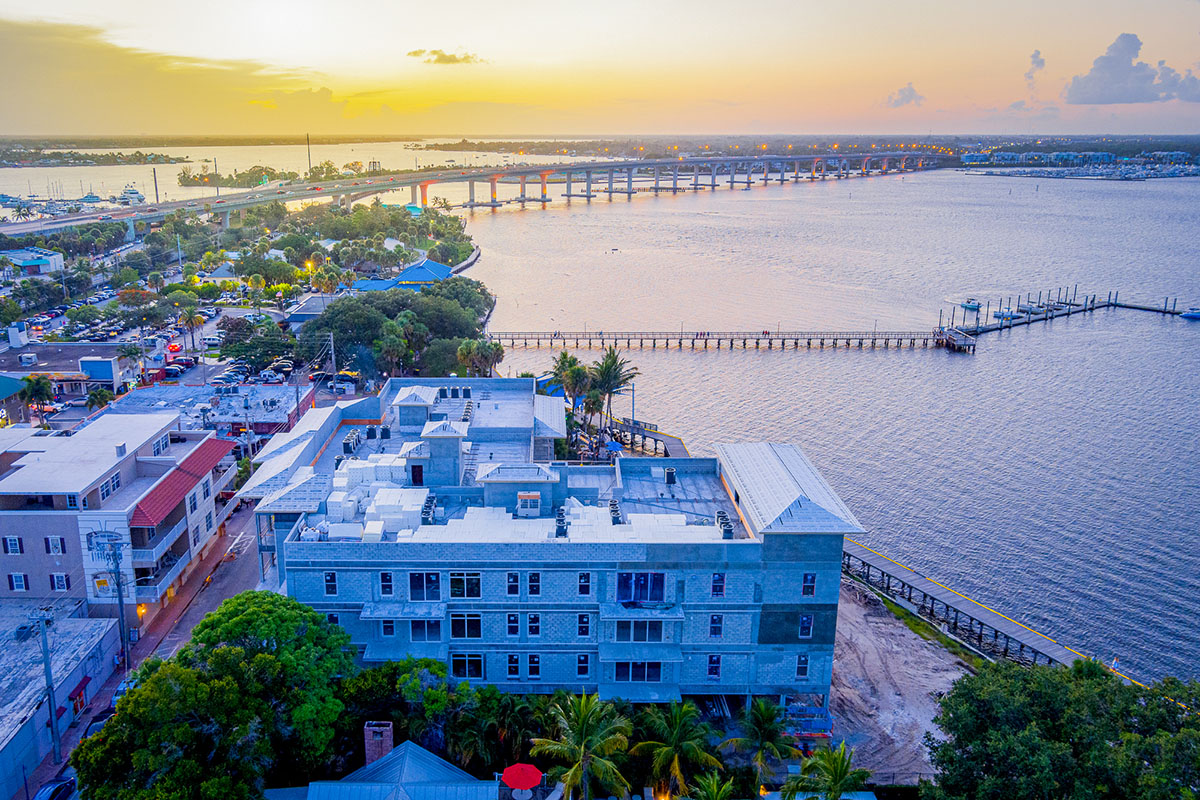 Plans for downtown Stuart are designed to attract multigenerations

Downtown Stuart is a popular destination — especially on the weekends. It is buzzing with all kinds of activity as visitors shop, dine, attend open air concerts and just have fun.

“Sundays used to be our slowest day of the week, and now it’s our busiest day of the week,” says Bill Moore, president of the Downtown Business Association. “And that’s because we have a fantastic green market that Stuart Main Street is running and that’s at Flagler Park, and a Rock ‘n Riverwalk music series that we do year-round. Between the two, it brings a tremendous amount of people down every Sunday, and they love it.”

It’s no surprise that historical Downtown Stuart has become a hub for locals and tourists. Nestled along the St. Lucie River, the district offers 50 locally owned shops, restaurants, galleries, a performance theater and a history museum all situated in a charming Old Florida setting.

The town’s quaint century-old buildings beckon visitors to learn about Stuart’s rich history. They hearken back to those early days when pioneers made a living growing pineapples and fishing in rivers that were teeming with tarpon and black bass.

Downtown Stuart has even received national attention from top publications. It was awarded The South’s Best Small Towns by Southern Living, Happiest Seaside Town by Coastal Living and Best Small Towns to Visit by Smithsonian Magazine — just to name a few.

With literally hundreds of events held during the year, the trendy small town offers all kinds of recreation for everyone. In addition to Sunday’s Market on Main and Rock ‘n Riverwalk, upcoming events include live performances at the Lyric Theatre, arts and crafts festivals, a beer fest, a blues, bourbon and barbecue festival, movies in the park, Halloween events, Stuart Christmas parade, Hanukkah celebration, Stuart boat show, marathons and Fourth of July fireworks.

The city also offers weekly aerobic and yoga classes on the Riverwalk stage.

Due to its economic success, commercial space in historical downtown has been rented out for years. As some businesses leave, new ones quickly replace them. New businesses that have opened or will open this year include Hudsons on the River, Lush Lounge, Passion Juice Bar, Oak and Ember Steakhouse, Method Dry Bar and Blush Salon & Co. Kilwins will be moving three doors down to a larger space.

In recent years, the city has approved upscale projects to bring more residents to downtown. Azul Luxury Residences, a 49-unit apartment complex, was developed in 2019 next to Sailfish Circle followed by River House Stuart, which offers 20 waterfront residences on Seminole Street.

“We’ve all heard the cliché, ‘Live, work, and play’ — it’s always a part of our fabric as a community, and when it comes to downtown redevelopment, it seems like the live part is the final piece in many of the redevelopment projects,” says Jim Chrulski, Stuart community services director.

City officials point out the importance of bringing residents to downtown.

“In an urban environment, you want to have residential close to your downtown businesses to help support that downtown business group,” explains David Dyess, Stuart’s city manager. “They can help support those businesses in a better way where it’s walkable or bikeable, right to the business without having to drive a car and to find a parking space.”

“Having people where they can live, work, and play in a walkable area alleviates traffic because now you have multimodal mobility,” adds Erin Wohlitka, acting development director. “So people are able to walk and bike, and by increasing that opportunity, you’re decreasing the need for vehicles.”

Both Azul and River House Stuart were such a success that the city commission has approved Sailfish Cove. The new project will consist of 30 luxury condominiums and eight retail and office spaces that sit along the banks of the St. Lucie River on Seminole Street. Prices range from $630,000 for a one-bedroom unit up to $1.6 million for a three-bedroom condo. The development, which is mostly sold out, is scheduled to be done by January.

To attract a multimillion dollar project like Sailfish Cove, the city knew it needed to redevelop and improve Seminole Street. The commission has approved a streetscape that will create attractive brick paver walkways, on-street car and golf cart parking, a loading zone and underground utilities. The Seminole Street improvements, say city officials, will tie in with Sailfish Cove and enhance the area.

“By making this improvement, we’re hoping that a lot of storefronts will open doors on Seminole Street along with Sailfish Cove with the retail coming on the first floor,” explains Pinal Gandhi-Savdas, executive director of the Community Redevelopment Agency. “All of that will create walkability. There are also restaurants that have some courtyard area in the back of Seminole Street, so we’re hoping they will create some outdoor dining there, too.”

Construction for the street project is scheduled to begin around May and is estimated to be completed within 18 months.

The city also plans to extend its historical downtown by redeveloping the area near the Martin County Courthouse along East Ocean Boulevard. City commissioners recently approved the Elizabeth, a mixed-use project that consists of 52 apartments and more than 5,000 square feet of commercial space. The new development will be adjacent to the Civitas building and across from the courthouse.

Tim Hernandez, the developer, explains how he named the project.

“I was trying to think of a name that’s elegant, classy and memorable, and my wife is all those things, so I called it The Elizabeth,” he says.

Hernandez also spearheaded Azul Luxury Residences. As an urban planner, he tends to take on redevelopment projects that are in vibrant, pedestrian-friendly communities.

“One of the great attributes of Azul is that you can walk to restaurants, walk to dining and walk along the boardwalk,” he says. “The Elizabeth, like Azul, will appeal to people who embrace the virtues and benefits of living downtown.”

Hernandez points out that he chose a neoclassical style for The Elizabeth because he wanted the architecture to blend in with the surrounding buildings.

“We’re in a serious civic area with large important uses such as the historic Cultural Center, the courthouse and city hall, which is moving to the Wells Fargo Building,” he explains. “We wanted our design to be respectful and complementary to those existing and future uses.”

With the new project, Hernandez says his aim is to attract young residents to downtown by offering more one-bedroom rentals. He also hopes to draw attorneys to lease office space in the building with the courthouse being so conveniently close. City officials say the redevelopment will expand downtown from its core and create an aesthetic and walkable environment.

The Creek District, also known as Downtown Stuart’s arts and entertainment district, is south of Confusion Corner and extends along Colorado Avenue to U.S. 1. Years ago, the city redeveloped the area through its beautification project by turning Colorado Avenue into two lanes and added roundabouts, landscaped mediums, on-street parking and widened sidewalks.

Today, the street has become a scenic gateway to downtown. Public works of art sit prominently along the avenue including the bronzed waterbird sculptures designed by renowned artist Geoffrey Smith.

Since the beginning of this year, the district has partnered with the city to bring sidewalk mosaic art to the area. The program was inspired by a mosaic art project that decorates sidewalks in the nearby Potsdam neighborhood. So far, three mosaics have been installed. The program is scheduled to continue until 20 mosaics have been created for the district. Go to www.missingart.space for more information on the mosaic project.

Additionally, the Creek District also celebrates First Friday Fest, a free event that is from 5 to 9 p.m. on the first Friday of each month. The public can stroll the district and visit individual businesses while listening to live music and shopping for fine arts and crafts.

Downtown Stuart offers a coastal Southern charm, and its history and down-home friendliness will welcome visitors to return again and again.

“I think what makes it special is there’s something for everyone, no matter what age group you belong to,” says Kate Cotner, a lifelong resident who frequents downtown. “There’s the Lyric Theatre, there are ice cream shops for children, clothing stores for ladies and a cigar shop for gentlemen to go to. There are restaurants both for date night and for families. There’s really something here for every single person to come and enjoy a piece of what Stuart is all about.”