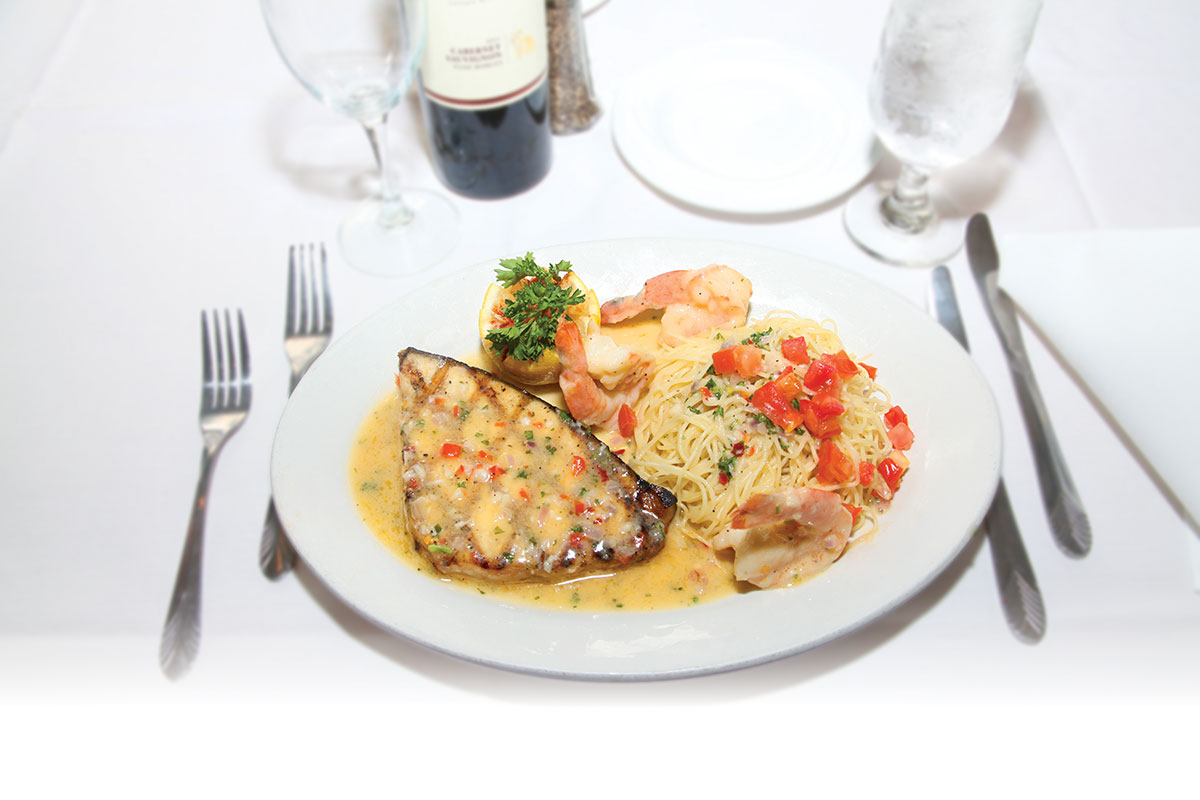 Catch of the day swordfish with shrimp and angel hair pasta is a delicious combination at Shuckers on Hutchinson Island. GREG GARDNER PHOTO

Try as he might, Tony Carpentier just can’t stay away from his Shuckers restaurant on Hutchinson Island.

After he sold it late last year, Carpentier was asked to stay on as a consultant to oversee important projects at Shuckers and two other Florida restaurants owned by New York-based ARK Restaurants Inc.

Carpentier bought the restaurant in 1993 from the Internal Revenue Service and sold it in 2001, but “held the paper.” After the 2004-5 hurricanes, the building was heavily damaged, repaired and reopened. In 2009 after the owner died, Carpentier took over the property and has been managing it since ― even after he sold it.

“We saw the huge potential and we had a great transition with Tony,” says Bob Stewart, president of ARK, which also operates the restaurants at the Hard Rock Cafes in Florida. “We’re very happy and we want him (Carpentier) to always be around. It is a great product and we don’t want to change anything. It was an easy transaction and we take the position that we want to keep them (employees) forever. Tony felt comfortable and the employees see that we want them also. The chef does a great job, and we want them to continue what they are doing.”

Executive Chef Ralph Formisano, who has been at Shuckers since 1993, understands why the restaurant has been so successful. “It’s location with very reasonable prices for food and drinks,” Formisano says. “We make everything from scratch. Nothing is premade and we have a friendly wait staff.”

With meticulous records from servers, management can gauge what sells and what does not. The 72 employees at Shuckers in 2015 served an astounding 276,174 customers. In January, they served more than 31,000. Carpentier says he has people who have been with him for eight and nine years and the only turnover is from greeters, who are often students who have to return to school.

In addition to taking reservations (recommended) and seating people, the greeters actually control the pace of the restaurant by seating the customers so the kitchen is not overwhelmed. The restaurant has 300 seats. Carpentier hopes to expand the outside deck to add more tables by the end of the year.

While the restaurant was once a large open room, the front section now has 100 seats for banquets, weddings and family reunions. Shuckers hosted 80 of those events in 2015. The doors to the banquet room fold back two Wednesday nights each month for one of the most popular events, Big Band Night featuring the 17-piece group, The Dreamers. Trivia is Monday night and there is live music on Thursdays and Fridays. If the room is not rented and the restaurant is busy enough, tables can be set for diners.

For nearly 20 years The Shakers have been playing vintage rock ‘n’ roll to a packed crowd outside every other Sunday afternoon from 2 to 6 p.m. Chemistry and the Baker Boys play the same hours on alternating Saturdays.

Joined at the hip to Shuckers is the Island Beach Resort with 60 units, some available for destination weddings. The synergy between locals and visitors enhances the experience at the restaurant. The gift shop is busy as people come and go. Carpentier’s wife, Karen, will stay on as a buyer to purchase items she knows people will buy. “She has a good eye, and when the new owners asked how she wanted to be compensated, she asked to purchase $2,000 worth (of product) at cost for her loved ones on birthdays and Christmas,” says Carpentier.

Shuckers sponsors Hibiscus House for abused children, annually hosting a party with a visit from Santa and Mrs. Claus. Since he took over the restaurant in 2009, Carpentier has hosted an anniversary party in mid-August when locals enjoy the festivities with all proceeds going to Hibiscus House. Every year for Fourth of July, Shuckers puts on a fireworks display.

Shuckers underwent renovations and held a “Pee Party” to celebrate the addition of two restrooms next to the outdoor dance floor.

But the friendly atmosphere is what draws Hutchinson Island residents to Shuckers. They have been coming for years and Carpentier considers them family. On a recent Sunday afternoon, people streamed by to say hello and Carpentier knew them all by name. Couples who met at Shuckers now bring their children there.

Before he sold the restaurant, Carpentier had to make sure the future and well-being of his employees would be protected. “My main concern was the staff,” he says. Three other suitors weren’t the right fit. One wanted to turn it back into a nightclub, the second would have installed a cookie cutter operation and the third was looking to make big changes.

Before he started with no experience in the restaurant business, Carpentier was an electrical engineer working on night vision technology for the military. He also developed the Regency Square Shopping Center in Stuart and Cutter Sound, a golf course community in Palm City now known as Palm Cove.

Besides being one of the very few oceanfront restaurants in St. Lucie County, Shuckers is popular for good food. “We have different cuisines, Tex-Mex, Italian, seafood, pasta, good steaks and plenty of appetizers,” says Carpentier. “This is a fun place to bring your family.”

In a tradition going back to 1993, thousands of children have been given toys. When families arrive, greeters pull out a box of Beanie Babies (bought by the gross) and let the child take one home. Carpentier has met people who received Beanie Babies when they were kids and now they bring their children to Shuckers.

The most popular appetizer according to manager-kept data is fried calamari. Carpentier says he installed continuous filters for cleaning the cooking oil, which allows more use and prevents heavy oil to ensure a lighter batter.

“Every six months we look at the menu and make adjustments very carefully,” says Carpentier. “Ralph (executive chef Formisano) will create a new dish to replace a bad seller.”

Another popular appetizer is the tuna sashimi, with ginger and wasabi, flanked by a small salad with a sweet dressing. Formisano makes all the Shuckers dressings from scratch. The herb-crusted flat-bread pizza is a taste of Tuscany with a mix of pesto, artichokes, mushrooms and roasted red peppers.

The catch of the day swordfish comes with angel hair pasta and several large shrimp in a delicious combination. A longtime special customers love is meat loaf with a mushroom demi-glace, surrounded by garlic mashed potatoes and roasted vegetables. The mix of meat loaf consists of beef, pork and vegetables.

“We serve consistent fresh food ingredients,” says Carpentier. “And we have people from 9 months old to 90 years old. They come down here to see us before they go to their condos.”

Opens at 11 a.m. for lunch and dinner