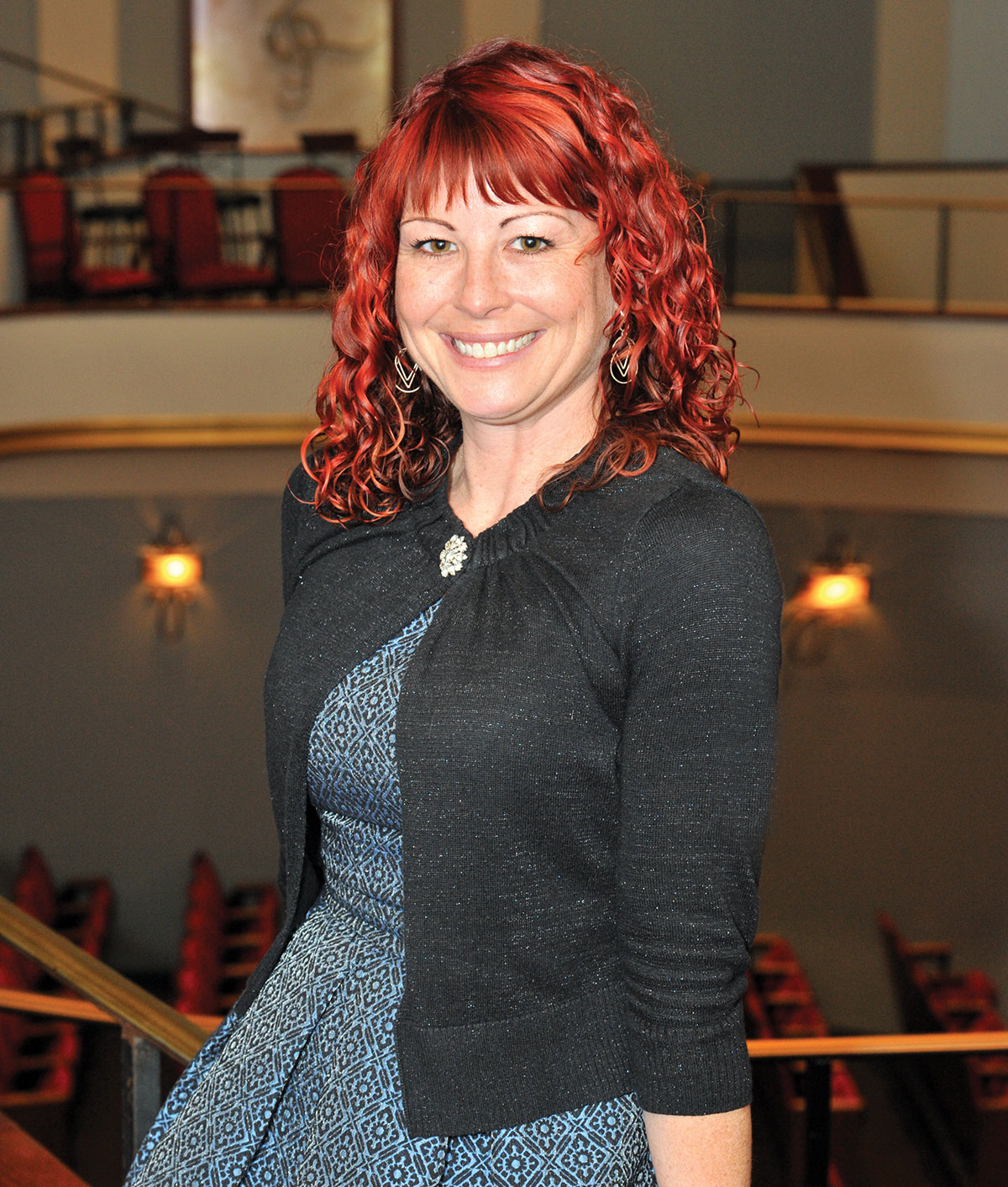 Walking around Confusion Corner in Stuart with Kia Fontaine is like walking around with a popular TV personality. All the locals know Fontaine and greet her warmly. The feeling is mutual.

Kia (which rhymes with sky and means ocean in Hawaiian) Fontaine, executive director at The Lyric Theatre for the last year, is that rare person in the right place at the right time. Spend five minutes with her and you know she’s doing what she loves and doing it well.

On a typical, super-busy day, happiness bubbles out of Fontaine, 34, who became The Lyric Theatre’s executive director April 1, 2015, replacing John Loesser who’d held the position for 16 pivotal years. With Loesser handling the artistic aspects, the duo continue working closely together. For Fontaine’s part, whether she’s overseeing operations or writing an artist’s contract, she’s in her element, “making sure all the magic happens.”

That’s been Fontaine’s focus ever since Loesser hired her as his operations manager in August 2008. That magic comes with a practical side, too.

NO JOB TOO SMALL

“We have such a small staff that I’ve been known to clean bathrooms and greet audiences at the door when the need arises,” Fontaine says. “But that’s the beauty of The Lyric. No matter how dirty the job, we all roll up our sleeves and do it.”

After two years as operations manager, Loesser promoted her to his assistant. For the past six years, Fontaine has been learning at Loesser’s knee, training to replace him as executive director.

“Today, I’m pretty much John’s brain,” Fontaine says with a laugh. “I manage all the practical details to free him up for the creative stuff he loves. I can never thank John enough for being such a mentor to me. He saw my potential and believed in me from the start.”

Loesser’s confidence in Fontaine is abundant.

“Kia is the perfect one. Born and raised in the community with passion and skill for the arts, her organizational skills are much better than mine and her love of this community has no equal. There’s no one better to lead The Lyric into the future,” Loesser says.

The two seem destined to work together. In 2001, Fontaine was working for the City of Fort Pierce organizing its bicentennial celebration when she joined the Time Capsule Committee. Suddenly, Fontaine found herself the logistics coordinator for one of the biggest celebrations in the city’s history. There she was, a 20-year-old, working days for the city and attending Indian River Community College full time at night — the pressure was just what Fontaine wanted.

“Being the logistics coordinator meant working with the fire and police chiefs, the public works and city officials putting all the pieces together. During the months of preparation, I asked everyone, ‘Can I handle the entertainment?’ ” says Fontaine, who got her first taste of show biz at 6 and found it to her liking.

“I’m the daughter of a single dad and when I was little I sang in the choir at St. Andrew’s Episcopal Church. The Treasure Coast Opera Society was producing La Boheme and asked us choir kids to audition. I got the part of street urchin, but it wasn’t until the first dress rehearsal when I saw the opera stars, the costumes and everything come together on stage that I understood what the show was all about,” Fontaine says.

When her dad picked Fontaine up that night, she hopped in the car, announcing she’d discovered what she wanted to do with her life.

“I told my dad I wanted to be on stage or be stage manager,” Fontaine says. “That’s never changed. I always sang at church in the Praise and Worship Service. Now I lead it. I volunteered for the Fort Pierce Jazz & Blues Society.”

On the day of the much-awaited celebration, Fontaine was frantically searching for someone who could produce a rider — a contractual agreement necessary for the entertainers to perform. Out of nowhere, a man in tennis shoes and a ball cap walked up. That man was John Loesser and he knew all about riders. Loesser knew everything.

“John told me exactly what to do. Suddenly, I’m calling up the nearest Publix manager with a list of items I need in a grocery cart out front in half an hour and it went from there. We needed to feed all the performers, crews and police officers. We needed safety barriers. I got it all done in time. I operate best under stress,” Fontaine says with a laugh.

When Loesser heard that Fontaine and her father, James Hamill, frequently performed music for friends and family, he suggested they rent The Lyric for a show.

“My dad and I played guitar and sang there pretty regularly and I got to know John better and better. By now, I was the historic preservation officer for the city,” she says.

Fontaine was disgruntled that the city’s Historic Preservation Board had agreed to demolish the McCarty House, one of the oldest buildings in Fort Pierce, when she heard that The Lyric’s operations manager was leaving.

“I contacted John immediately. Everyone told me I was crazy to leave the city. I was about to be vested. I’d started there as a file clerk at 17. But I had a dream. Only one person believed I should follow my dream. That was my dad.”

Fontaine says Mayor Eddie Enns called her into his office, urging her to stay. Even Loesser was concerned about her leaving the security of the city.

“John went out of his way to tell me I’d be taking a considerable pay cut. Instead of working 9 to 5, I’d be working 9 to exhaustion. He told me ‘You have to live it,’ ” she says.
Fontaine, who had graduated from Indian River State College, was considering going for her master’s in business administration. Loesser told her she wouldn’t have time.

“John said, ‘Give me five years and I’ll train you up. You’ll be able to go anywhere in the world,’ ” Fontaine remembers.

The next day, driving to Tallahassee on city business, Fontaine had plenty of time to think.

The promotion to executive director hasn’t meant significant changes since she was already managing much of the day-to-day operations.

“The board members all shook my hand and said, ‘It’s about time.’ The person it changes things for is John,” Fontaine says. “He can stay home guilt-free now.”

She’s teasing — a little. Only now, the buck stops with Fontaine and Loesser is free to follow his passion: find and book shows, fundraise and work with the community.

Her primary goal of the moment is to “young-up the audience.” That doesn’t mean changing the performing artists. It means changing the advertising strategy.

“I’ve taken us out of the ‘dino-age’,” Fontaine says. “Instead of relying on print advertising, we’re doing lots of social media and reaching younger people.”

Fontaine wants to attract more young professionals and their families by offering family programs for those soon-to-be members, supporters and benefactors.

Upcoming shows should attract those very people. Fontaine is looking forward to The Wellington International Ukulele Orchestra on March 18; Los Lobos and Ballet Folklorico Mexicano in Fiesta Mexico-Americana on March 21 and comedy genius, Paula Poundstone on April 16 to name a few.

Fontaine is also putting the finishing touches on The Lyric’s 90th birthday celebration on March 5. The night includes live and silent auctions and a roast of Loesser.

And The Lyric’s unique summer camp runs from June 23 through July 29. Registration began mid-February and is ongoing. Campers learn the craft of theater in its many forms in the country and around the world.

“It doesn’t end with a performance like most camps. It’s more than that,” Fontaine says.

In addition to being a center for the performing arts, Fontaine sees The Lyric Theatre as a cornerstone of Stuart. It’s a piece of history that brings in revenue to so many.

“A couple buys tickets, they hire a baby sitter, put gas in the car, eat dinner out, have an after-theater drink and stroll. Performers stay in motels. Local restaurants check with us about ticket sales to see how many waiters they’ll need. This theater touches so many lives,” Fontaine says.
She’s happy to report that ticket sales are up. Chances are that trend will continue for a long time.

How she relaxes: Fontaine is wild about the water. She paddleboards, surfs, fishes, sails a catamaran, scuba dives and collects sea glass on long beach walks.

Not everyone knows: She and fiancé, Luca Bradley, went to Rio de Janeiro for the World Cup in 2014; and she’s a foodie with a small vegetable garden.

On her bedside table: The Lost City of Z by David Grann, Blink by Malcolm Gladwell and A Treasure We Call Home by Rick Crary, plus baskets of magazines and publications.