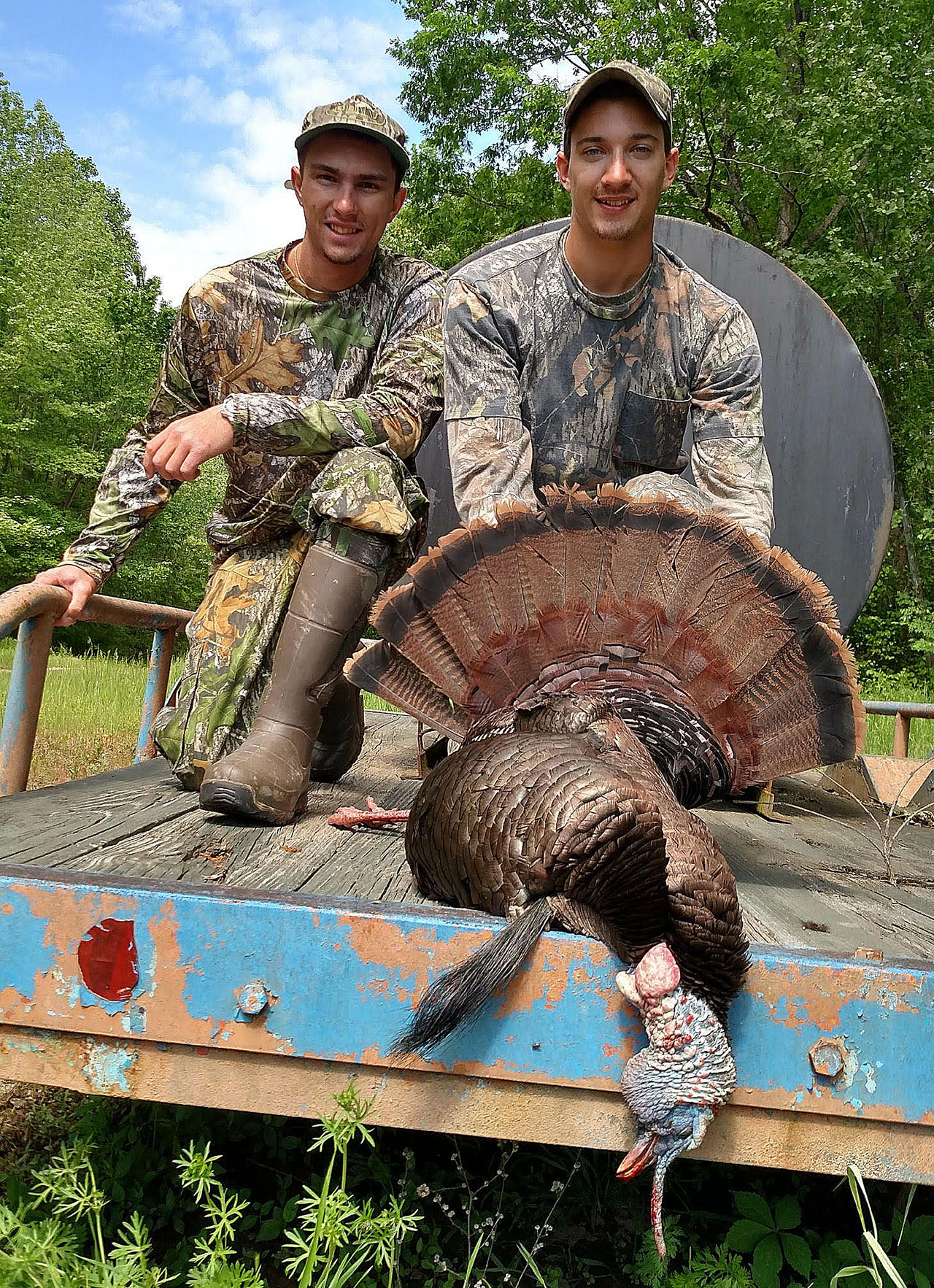 Putting Sunday dinner on the table is rote for most cooks: buy some frozen poultry or a roast, mash some potatoes, and slice apples for a pie.

College junior Sam Hayden-Kaplan from Jupiter has given some thought to his optimal Sunday dinner and wishes his mom would let him supply the bird.He loves fresh wild turkey and would happily shoot one for his family. He even has a recipe in mind.

“Wild turkey tastes the opposite of what you buy at the store,” says the young man who hunts before and after classes nearly every day and professes to love eating fresh dove, turkey and other game that enters his crosshairs. “My roommate’s mom showed me how to slice it thin, soak it in pancake batter then dip it in flour and deep fry it. I would like to do that but my mom will probably buy a Butterball turkey when they visit me.”

Hayden-Kaplan is a junior at Bethel University in Tennessee, studying business on a shooting scholarship made possible by his stepfather’s early encouragement of his proficiency with firearms and the 10-year-old Young Guns scholastic clay shooting team at Quail Creek Plantation in Okeechobee. He joined the Young Guns as a high school sophomore and went to national competitions twice, contests in which shooters are faced with 600 moving targets over 8 days. He has since landed a summer job at the preserve helping to set up the clay shooting course, which he likens to “golf with a shotgun.”

“If we miss a shot, we tell each other ‘focus on it harder,’ because it’s more of a mental game than a matter of skill,” he says. Shooting turkeys is just as challenging as clays, he says, contradicting their reputation as dumb birds. “They’re very smart; they can spot movement very well.”

HUNTING ON THE RISE
Hayden-Kaplan is one of about 242,000 licensed hunters in Florida, a number far outmatched by the state’s 3.1 million licensed fishermen, according to census data. The number of residents hunting in Florida rose by about 20,000 from 2006-2011 (more recent numbers are not available).

State Fish and Wildlife spokesmen say nobody tracks the number of out-of-state hunters who visit the state’s 181 preserves, which do not require any sort of hunting license to pick off a variety of game from exotic species like axis deer and water buffalo to native animals like alligators, quail, white tailed deer and boar.

Not far inland from the Treasure Coast are many options for hunting, from private guide services that may take hunters on public lands during specific hunting seasons to two large preserves, Fox Brown Outfitters and Quail Creek Plantation. Both Okeechobee-area preserves offer a range of hunting options and services that include exotic species in fenced areas. Preserves have been around since 1929.

“Quail hunting is very big out here, birds are always a lot of fun,” says Chelsea Wallace, manager of Fox Brown Outfitters, which offers about 3,000 acres of fenced and 1,000 acres of native species hunting. “We see a lot of bowhunters who might go for something challenging like axis deer, if they want something funky to put on the wall. We often suggest they schedule a couple days for that because it’s not realistic to expect to get one the first time.”

About half of the big game hunters at Fox Brown are from out of state, she says, spending as little as $150 for a half-day dove hunt to as much as $6,500 to take down a Pere David deer, which often have enormous horns and are formerly native to China. Those who can’t or don’t want to take their prey home to eat enable local charities to fill their freezers as all meat, hides, and other useful byproducts are processed and donated to eliminate unnecessary waste, Wallace says.

OPTIONS FOR EVERYONE
Nearby, the Quail Creek Plantation is known as different things to different people: Some visit for its restaurant, some for sporting clays, while others take buggy rides or fish on its 6,000 acres.

“People from out of state are most interested in hog hunting,” says Maria Fanizzi, who manages the property with her husband Fred, a hunter and guide who was recruited by the owner to oversee its operations when it opened to the public in 2001. “People from up north have a fascination with the hogs and that’s all they want. Next is axis deer because the meat is very good,” but bird shoots remain the most popular attraction here next to the sporting clays.

Quail Creek is where Hayden-Kaplan first took a bead on a sporting clay arcing through the air. He credits that opportunity to his stepfather, Tom Pledger Jr. of Jupiter, a native Floridian, licensed boat captain, and hunter who has since joined the board of the Young Guns organization.

“I believe we should try to grow kids’ interests and keep them developing and building their abilities in their sport,” Pledger says. “Some people are just natural at what they do, and Sam was just a natural shooter.”

With his stepson at college, Pledger misses him as a hunting buddy. He’s frequently among those called by agricultural business owners and others with big tracts of land to cull hogs that destroy property by digging it up. Pledger and his children hunt a handful of hogs a year for themselves but as a hired gun he may shoot as many as 40 a day. “They do an extreme amount of damage and they multiply like rabbits, if not worse,” he says.

REGULATIONS PROTECT GAME
Wildlife management officials have made strides in improving hunting opportunities in Florida that declined from over-use several decades ago, Pledger says. “People have to understand if you kill everything you see you won’t have a herd in the future.”

Hunting regulations for public lands have changed over time, reflecting management challenges. Seasons can be restrictively short — general gun season is just four days long this November — and other regulations limit deer size and age, for instance, to bucks with three points on each side. Still, on nearby wildlife management properties that command thousands of square acres between Lake Okeechobee and the Treasure Coast, J.W. Corbett, the John G. and Susan H. DuPuis area, Hungryland, and Allapattah Flats, there were 386 deer, 416 hogs, and more than 1,500 doves taken by hunters from 2015 to now, according to state fish and wildlife figures.

Ryan Gill was similarly attracted to hunting at a young age and showed great promise in his shooting ability, but the Brooksville resident honed in on bow hunting — primitive bow and arrow hunting, specifically — and now makes his living fashioning custom equipment. Gill even handcrafts arrow points out of stone and attaches turkey feathers as fletches so they fly straight. A custom-made hunting bow adorned with the buyer’s choice of snakeskin can cost up to $800.

“Most people want to hunt with the latest and greatest equipment,” Gill says. But he is among those who seek an intimate connection with his quarry, getting very close to hogs and other game in order to take them down with a Stone Age weapon called an atlatl, which is a spear flung at high velocity from a hand-held launcher made from river cane.

“The first time I tried it, I was hard-pressed to hit something the size of a car with it,” he says. Practice and patience, as well as lots of time aiming at a row of beer cans set on a wall, resulted in a successful hog hunt with the archaic tool last year. Fans have followed along on his YouTube channel, with thousands of views logged for each of his professionally-produced videos. His atlatl hog hunt video concludes with him cleaning the carcass with a razor-sharp piece of obsidian, another Stone Age tool.

Those who dream of easy prey in this state of wide open spaces should not be naïve, however. “Florida is a peculiar place to hunt and it’s harder all the time,” Gill says, noting the bear hunt that offered a two-day season several years ago and did not allow any permits in his county despite a rebounding state population that’s estimated at more than 4,000 adults.

Restrictions can be a headache for some people like Gill, for whom hunting is more than a pastime. He relies completely on wild game for his family’s source of protein.“That’s what we live on. I very rarely buy a beefsteak,” he says. To that end, he’s tried to get primitive weapons like his recognized in state hunting regulations to no avail. As a result he’s only allowed to hunt hogs (which are unrestricted by size or bag limits) or exotics on preserves with his atlatl.

“I have a collection of heirloom rifles that I’ll take out once in a while for hunting,” he says. “Just to get it out of my system.”