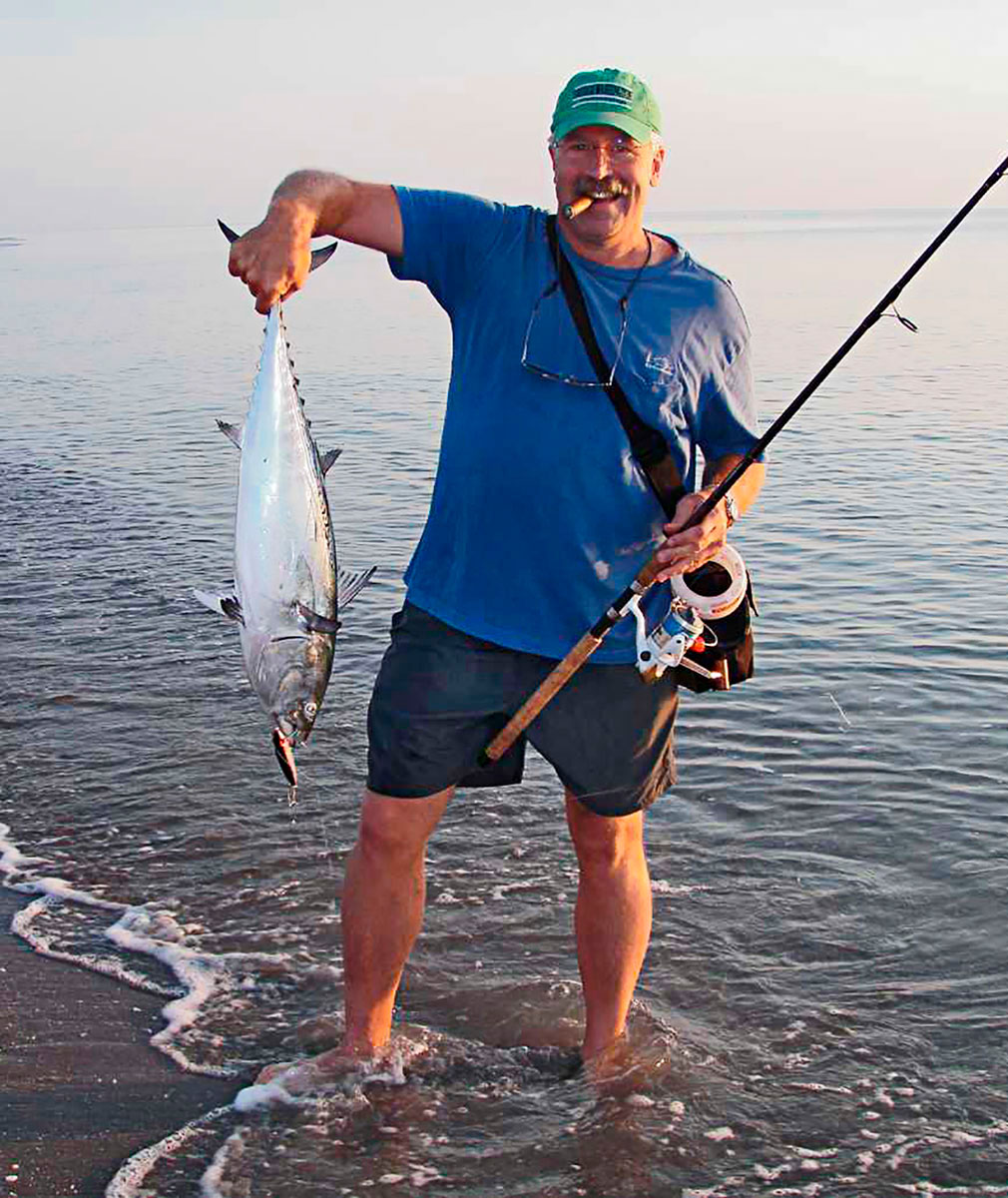 A regular at Hobe Sound beach is Doug Bernhard, whose community of fishing friends stretches to the White House. KATHY NAPOLI PHOTO

Perhaps you decided on a whim to see the sunrise from the beach, but were surprised by a nearly full parking lot. Instead of a giant yoga class saluting the sunrise you found dozens of men, most past age 50, hauling cartloads of fishing gear to the water’s edge.

None of them seemed to notice the rising sun turning the clouds a brilliant saffron color, nor the pod of pelicans gliding over the tops of the waves. Yet a ripple of excitement flowed through them like a current as one fisherman after another began straining at his pole until the frothing ocean coughed up a shiny silver fish. They cast again and again, moving like pistons on an engine. Then the sun finally crested the horizon, throwing golden rays across the sand, and the fishermen packed up and left.

If the thrill of hunting unseen prey beneath the water intrigues you enough to try your luck against the approximately 132,000 others with annual saltwater fishing permits, these are some of the people you’re likely to encounter along the way:

COMMUNITY CONNECTIONS
At Hobe Sound’s public beach, one of the morning fishermen is rarely in a hurry to claim a prime spot. He mingles, leisurely making his way down the beach while touching base with several others. It could be because Hobe resident Doug Bernhard, 59, is here just about every morning — or it could be because he enjoys the people as much as the fishing.

Bernhard frequently educates newcomers on where the offshore reef ends and the sandbar begins, how the underwater topography affects the fishing, what’s biting, and the best methods for hooking just about anything that’s likely to swim by. One of his friends calls him “Google.”

One story he doesn’t tell too often is that he was summoned to the Oval Office to outfit a sitting president with fly-fishing gear when he was a fresh-faced college kid working at Eddie Bauer in D.C.

To Bernhard, this beach is “my living room” because he’s been coming here at least seasonally for nearly 50 years. He noted with some emotion that his parents’ ashes were scattered here, and a nearby tree was planted in his mother’s memory. “It’s not about the fish,” says the retired UPS industrial engineer who has been known to share gear and frequently gives away fish to those he knows are casting for dinner. “I grew up with these guys, I grew old with these guys, and I’ve buried many of these guys.”

Since then he’s had opportunities to fish many parts of the world, but likes this small corner of it best.

“Wherever I go I look for a way to learn,” he says. “I observe people, their gear, I look in their bait buckets. When you think you know it all somebody will prove you wrong, you just have to keep your mind open.”

FAMILY TRADITION
There’s nothing more authentically Florida than a long-standing business that’s had its roof torn off in two successive hurricanes, has rebuilt, and continues to open its doors at 6 a.m. every day. To fishermen that business is Jensen Beach’s Snook Nook Bait and Tackle, run by Fred Caimatto, 31, who grew up here and took over the business from his father about 10 years ago.

“This is like a gas station: people come in for bait but hopefully they’ll also buy a package of hooks, some line, and maybe a few cans of soda,” he says. “The greatest part of this business is that we see the widest range of customers you can imagine, from those who can barely afford a bag of shrimp to catch dinner to those with $3 million boats.”

In his tenure, the younger Caimatto has freshened up the place but knows better than to erase the old-school tackle shop atmosphere. It’s still a place where fishermen hang around to share tips on where to find monster fish, but in a nod to the power of social media it also has an Instagram account.

Despite an extensive website with weather radar, a streaming webcam, and the proliferation of phone apps that are like having NOAA in your pocket, customers come in a steady stream to double check the tide chart taped to the counter near the cash register, says Caimatto’s mother, Mary Rollins, who works there part time. The constant flow of people and bait and information mimics the constantly changing waters of the lagoon just outside.

All of the effort it takes to keep a business afloat leaves little time — or motivation — to go fishing himself. “I do enough to keep it relevant,” he says with a sigh.

FICKLE FISH, CONSTANT CRABS
At 73 years old, Donald Plant still pulls crab pots twice a week in the St. Lucie River all the way up to Palm City. His white hair and beard complement the ruddy complexion and thick callused hands you’d expect from a commercial fisherman. Yet he’s also been in the retail fish business for 33 years as owner of Basin Seafood restaurant and fish market in Port Salerno.

The message for recreational fishermen is: don’t expect to stop by and pick up a few fillets to pass off as something you caught.

“Spanish mackerel is all they catch here anymore,” he says, a hint of his native New Jersey lingering in his speech. “The grouper and other stuff are pretty much gone from this area, between the restrictions and the species getting cleaned out. Most people only want swordfish and salmon anyway. Once in awhile I get a local who asks for Spanish mackerel.”

The blue crabs are a different story. If there’s one species that has benefitted from runoff, it’s the crabs, he says. “The females like salt water, so they’re down here, but the males like the brackish water so they’re up the river toward Palm City. Believe it or not the drainage from the lake makes crabbing better. I go out twice a week and by the time I get back they’re all sold.”

A consolation this veteran of the industry can offer to recreational fishermen is that the sea’s harvest is both cyclical and unpredictable.

“Dolphin (mahi-mahi) is our biggest seller but it’s been totally out of control this year,” he says. “Over the winter they didn’t come into shore (off South America), so the price is the highest it’s been since we’ve been in business. People think we raise our prices in winter, that we’re ripping them off, but we don’t, because we still have a lot of local customers.”

And the pinch hurts him too, as mahi is the key ingredient in the Basin’s popular smoked fish dip.

BAIT AND BANTER
Six o’clock in the morning doesn’t come too early for Mark Dravo, 49, a fishing guide who goes by Y-B Normal Charters from Fort Pierce. His live-bait well is filled and the boat is in the water before his first passenger arrives in predawn darkness and a steady stream of upbeat banter takes the edge off the early hour.

There’s a reason Dravo has been the guide of choice for Hutchinson Island resident Wayne Mills for several years. Mills is a lifelong environmentalist and former chairman of the Chesapeake Bay Foundation, which is dedicated to the health of that watershed. Clean water issues are his passion, and he loves to discuss ecology with Dravo, to find out what the guide has seen and what he knows about his native Florida.

It turns out Dravo knows plenty, especially where to find fish. While disarmingly easy-going, the captain has the single-minded drive of a sniper.

There was ample variety of prey in the sandy islands, mangrove holes and docks that Dravo took Mills to in the dizzying span of a four-hour, six-mile trip around the Indian River Lagoon. “I’ve dived most of these places, that’s how I research,” he says.

Although he officially started guiding full time just 14 years ago, Dravo had plenty of opportunities to learn the water because he’s a third-generation fisherman, following his grandfather, a guide, and his father, a pro bass fisherman. The depth of his knowledge keeps pointing to one thing: shallow water.

“Seventy percent of the big fish I have caught were in skinny water,” he says as he pulls up to a small island. “Snook are flat on the bottom and they like to get up in the shallows where dolphins and other predators can’t get ‘em. But they’re lazy, so you almost have to hit them with the baitfish.”

The snook fought hard that morning, most refusing to be brought to the boat. Mills settled for a glistening speckled trout or two and some satisfaction that came with seeing a variety of sea life in the shallows among regenerating seagrass.