From portraitist to social observer, artist paints what she sees

Kathleen Carbonara says she knew since kindergarten that she wanted to be an artist. One look at the “pink carnation” in the Crayola box and she was smitten.

But it wasn’t until decades later that she began painting, making a successful career as a portrait artist with works in more than 40 private collections, including the University of Notre Dame, along with pursuing a number of other subjects and themes, such as still lifes, that interest her.

She grew up in Fort Pierce, one of five children of well-known physician Francis Carbonara, and his wife, Regina. She graduated from John Carroll High School and went on to St. Mary’s College at Notre Dame.

“In hindsight, I think I would have enjoyed going to an art school. Thinking that there was no way to make a career out of doing art, I went back to school and earned a master’s in marketing and advertising from Northwestern University.’’

FINDING HER MEDIUM
After marrying John VerBockel, a private wealth adviser, she turned to raising their three children — two sons, Patrick and Teddy, and a daughter, Eva — in Winnetka, Ill. By chance, she and a friend decided to take an oil painting class at a local community center.

She found her medium and her calling, she says.

“I love the slow drying time of oils,” she says. “I love the layering of paint. It’s not like watercolor that can’t be controlled. Really, it’s perfect for me.”

She began painting portraits, starting first with some of her husband’s clients. She quickly went from a word-of-mouth business into a highly sought-after artist whose paintings exceed the boundaries of simple portraiture.

“I have always been interested in faces,” she says. “I paint very traditional portraits, because you are working for someone and are there to please them. They have hired me and I am not going to let my ego get in the way.”

THE PROCESS
She takes hundreds of photographs over two sittings, particularly helpful with children. She then is able to synthesize those photographs into portraits that are imbued with the unique personalities of the subjects.

“Asking a child to sit for hours is out of the question,” she says. “My mother had an artist draw my brother and sisters when we were kids and I look very grumpy in my portrait — because I was grumpy. Kids can’t sit and be themselves.”

Differing from her early days, when she was paid $500 for a painting, her current portraits command $15,000.

“A lot of work went into improving enough to ask for that fee, and my pricing is competitive,” she says. Along with taking local painting classes, she also took a course at the Portrait Society of America in New York.

The best reward, though, is the reaction she has received from some of the fathers of her subjects, who have cried when they see how she has portrayed their children.

“That has happened to me three times — so far,” she says.

Sitting in her Palm Beach home, the couple’s winter residence for more than 20 years and where they have recently moved full-time, Carbonara is surrounded by paintings, but none of them are hers.

“I put my paintings in the powder room,” she says, laughing.

And those paintings aren’t what you’d think would come from a resident of the posh communities of Palm Beach and Winnetka. One is a toothless woman grinning.

SOCIAL OBSERVER
Among the various subjects Carbonara has turned her keen eye and photorealist talent to painting are scenes and people from mobile home parks, in a series of work she calls “A Walk in the Park.”

She has taken her camera with her to local trailer parks, asking people to pose for her and telling them she would be painting their portrait.

“There is a community and an openness that I saw in the trailer park lifestyle,” she says. “Mobile home parks are a big part of the Florida landscape that I grew up with and they have always fascinated me.”

She emphasizes that rather than denigrating her subjects, she is celebrating the mobile home park and its inhabitants. The toothless woman just happened to be a teacher who was getting her doctorate in education, she says, and was too tired to put her dentures back in at the end of a long workday.

In her artist’s statement about the series, she wrote, “Many residents seem to disregard the physical confines of their compact homes, as their lives literally push out of the doors, spilling over into others’ spaces. Whether it’s the washer and dryer on the carport, or the set of dumbbells, kitchen table and futon outside, this blurring of lives and space begs the question — does closeness foster closeness?” 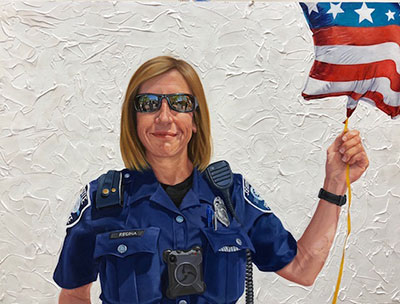 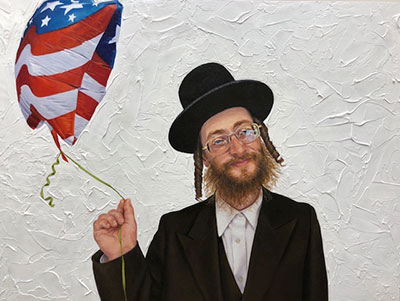 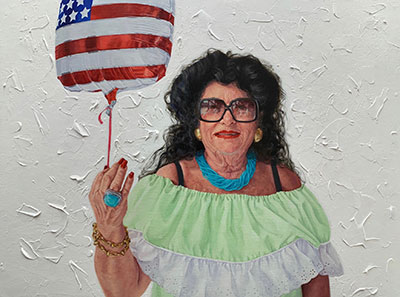 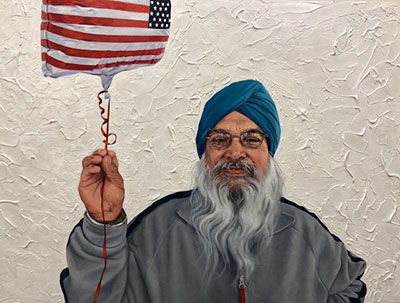 Carbonara’s series, Who’s Who in America, explores the diversity of the country’s population. Taking her camera, she approached subjects from all walks of life and asked if she could take their photo to use for a painting. No one refused, she says. The balloon is symbolic of their experience as an American.

LOVE OF COUNTRY
Another series was inspired by her experience as the daughter of an immigrant. Her Italian father so loved the United States that he had his children write letters to all the presidents when they were young.

Who’s Who in America is a series of a dozen portraits of Americans, a “melting pot” of people who make up the American fabric — a Muslim cab driver, a homeless man in Chicago, a policewoman in Seattle, an Orthodox Jewish gentleman in New York. She photographs

“Being American to me is not about a look or anything you can see with your eyes. It’s an attitude, a way of thinking and approaching life,” she says.

She was inspired by her Florida upbringing around the water and swimming pools for yet another series.

“I have been painting ‘poolscapes’ for many years,” she says. These large-scale underwater figure paintings initially depicted the distortional effects of water and were light and whimsical.

“My newer pieces are edgy and have a mysteriousness about them,” she says. “They are definitely a departure in look and feel.”

She browses thrift shops, looking for clothing and costumes and then has volunteer models wear them underwater in her backyard swimming pool. “I have a model underwater wearing a gown and heels,” she says. She can’t wait to paint another in a recent Goodwill find, a bridal gown and veil.

ANIMAL LOVER
Besides human portraits, the animal lover enjoys painting portraits of pets. “Painting a pet is not that much different from painting a person,” she says. “Hairier, maybe.”

“I love my family, dogs, friends, my home, gardening and exercising … but in my studio I think I am happiest,” she says. Right now, that studio happens to be her laundry room in her Palm Beach home, downsized from her Winnetka studio that took up one floor of her home.
“It’s really the best lighting in here,” she says, laughing while she turns off the dryer. “That’s all I need.”

After 30 years as a professional artist, Carbonara, 60, continues to push herself as an artist. She has not ruled out returning to school to get her master’s in fine arts. Another dream would be to be represented by a first-rate gallery. One of her proudest moments was exhibiting along with her son, Teddy, who is also an artist and is a graduate of the School of the Art Institute in Chicago.

But her next portrait might very well be her own grandchild. Her daughter is expecting her first child in April, and Carbonara is looking forward to her new role as grandmother.