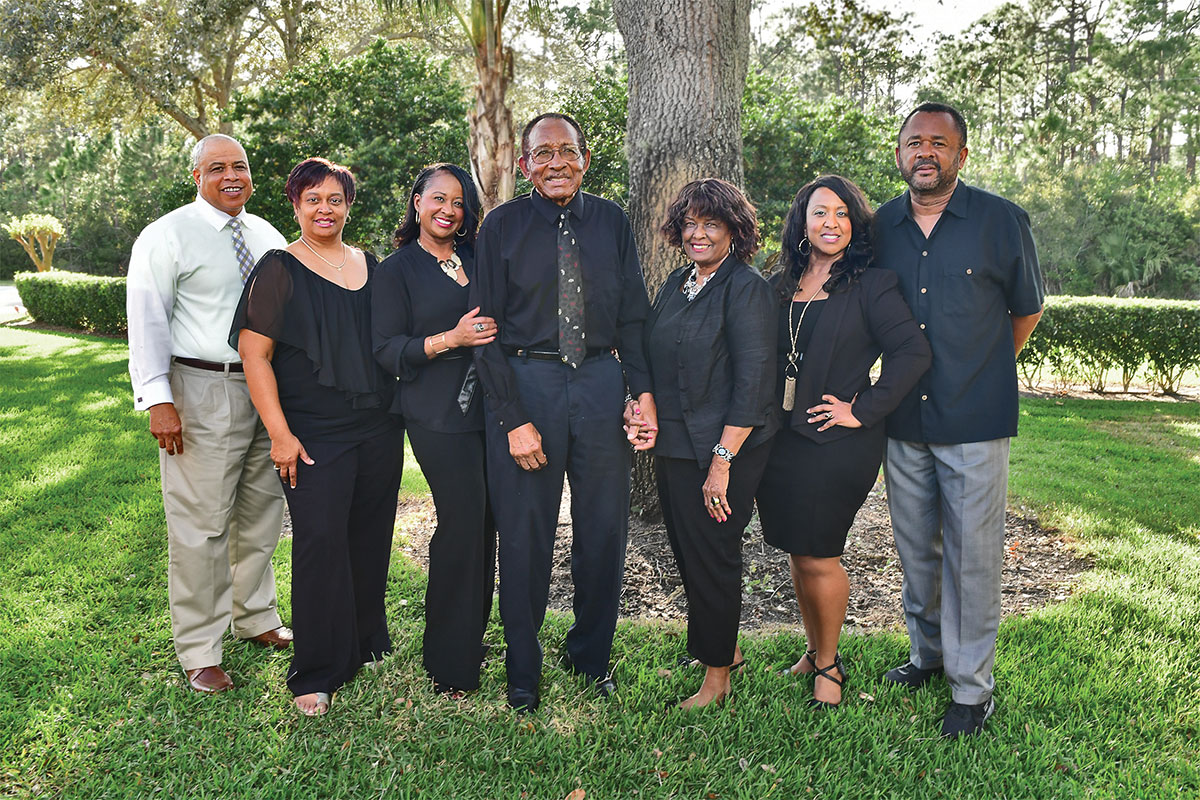 The Idlette clan will be honored at the annual Pioneer Family Dinner. Pictured are the patriarch and matriarch, Joe Idlette Jr. and wife, Bernice, center, and some of their children: Kevin, Jacqueline and Jennifer, on the left, and Jody and Joe III, on the right. ED DRONDOSKI PHOTO

Fifty years ago, Joe Idlette Jr., the son of a Georgia sharecropper, took a courageous and successful stand against school segregation in Indian River that once resulted in death threats from the Ku Klux Klan.

Now, decades later, Idlette Jr., his wife of 62 years, Bernice, and their progeny are being recognized by Vero Heritage Inc. for his historic actions. The nonprofit group, which operates the Heritage Center on 14th Avenue, will honor the Idlettes as the outstanding pioneer family of the year at its annual Pioneer Family Dinner May 13. Idlette, who served 20 years as the first African-American elected to the county school board, and Bernice have deep roots in Indian River County. He is a native and Bernice moved south from Georgia with her parents when she was 6 months old.

His father, Joe Sr., moved down from Sumter County, Ga., in 1923, in hopes of finding work with the Florida East Coast Railway. Eventually, he did hire on with the railroad, but in the early years he helped build Ocean Drive and State Road A1A, his son said.

“He did manual labor, the hard work,” Joe said. “He was a sharecropper in Georgia, so he had always worked hard.”

The senior Idlette met and married Nancy Cookley, whose ancestors were slaves in South Carolina. William Cookley, Nancy’s father, came to the area in the 1890s and picked beans on John’s Island farms.

Idlette Jr. grew up living mostly in housing provided by the railroad. In the early years, his mother harvested beans and tomatoes. The railroad had a retirement plan and offered free health care at a company-owned hospital in St. Augustine, along with railroad passes so that people in need could get there.

But Idlette Sr. left his railroad job in the mid-1940s, and his son went to work in a Winter Beach packinghouse to help support the family.

The first school for blacks, known as the Gifford School, stood on the east side of U.S. 1 around 38th Street. Because of its location at the southern end of Gifford, it was dubbed the “low end school,” Bernice said. Until 1938, it offered only the first six grades.

“The high school kids went to Fort Pierce and the parents were responsible for getting them there,” Joe said.

High school classes were added at the school, and in 1952 a more modern but still segregated Gifford High School was built on 45th Street. That’s where Idlette Jr. graduated from in 1953. Bernice graduated in 1955. Both were the first in their families to go to high school.

“My dad, he did all of the second grade,” Joe said. “They were sharecroppers. As soon as a kid got big enough to go to work, it was requested that they go to work. My mom, she did eight grades.”

Bernice said her parents left school “after the third or fourth grade.”

The Idlettes and other blacks who grew up in Gifford have spoken of far superior resources that were available to white students in Vero Beach. One black educator said Gifford students had to make do with hand-me-down textbooks from Vero schools. Another, a lawyer, said she was surprised after enrolling at newly integrated Vero Beach High School to find out students didn’t have to bring their own food for home economics classes. Idlette Jr. said college scholarships and financial aid were nonexistent for blacks when schools were segregated.

“Nobody really cared about educating us,” he said. “We did the best we could with what we had.”

Bernice said she wanted to be a teacher, “but I ended up being a beautician, a cosmetologist, which I loved.”

Idlette Jr. served in the Army Signal Corps after high school. He was stationed in Japan in 1954 when he read about the landmark U.S. Supreme Court decision, Brown v. Board of Education, that ordered public schools to desegregate and to do so “with all deliberate speed.”

“Well, I got out of the service and came home,” he said. “I guess I was home about 10 years and nobody had made any effort to desegregate the schools. A lot was going on in other places, but nothing here.”

By 1964, Idlette Jr. was working as a classified letter carrier at Patrick Air Force Base in Brevard County and had a growing family.

“Like any other parent, I wanted the best for my kids,” he said. “I wanted them to have the same opportunities other kids had.”

With backing from the NAACP, Idlette Jr. filed a federal lawsuit against the school board around 1964, asking the court to declare segregated schools unconstitutional.

“It was a long, drawn-out thing,” he said, “but around 1969 we finally got a favorable ruling. People were doing everything they could to delay it. There were constant threats.”

One day, the couple was backing their car out of their driveway when two white men pulled in behind them. Both showed FBI badges and said they needed to talk.

“They said my name had come up a number of times at Ku Klux Klan meetings,” Joe said. “They needed to know if I had any identifying marks on my body so that in case something happened, they’d be able to identify me. They also wanted me to know they had someone on the inside, and if something was about to happen, they would be notified.”

With the sheriff’s permission, Idlette Jr. started carrying a weapon during his daily commutes to Patrick Air Force Base, but he never had to use it. Indian River County’s schools were integrated in 1969, mostly without incident.

Besides serving on the school board, Idlette Jr. became a local business owner. He developed the Hillcrest Grocery in Gifford and bought 160 acres of pine woods, which became a productive citrus grove near Oslo Road.

The Idlettes have three sons and three daughters, 10 grandchildren and three great-grandchildren. All of the children graduated from Vero Beach High School, went to college and found good jobs. Joe III is retired from the city of Vero Beach; Jennifer is transportation director for the school district; Jody is principal of Sebastian Middle School; Keith is a mortgage broker in West Palm Beach; Anthony works for AT&T in Melbourne, and Jackie operated a school that helped dropouts find jobs.

“We’re so proud of them,” Joe said. ”Without integration, it probably would not have happened. Things have changed so that now you have scholarships and college loans that were not in existence at the time. God has been good to us.”

Jennifer, who graduated from Vero Beach High School in 1987, said her father always stressed the importance of getting a quality education.

“By filing the suit, he definitely changed life for minorities, not just African-Americans,” she said.

“He was concerned about children, his own and others,” said Harriett Crago, a former English teacher at Vero Beach High School and guidance counselor at the high school and junior high. “He was a leader when leadership was needed.”

“It took a great deal of courage for him to do what he did,” Hurst said.

Who: Honoring Joe and Bernice Idlette and family

For tickets and sponsorship information: Call 772.770.2263 or visit Info@veroheritage.org