Homeowners and architects team up to build a magnificent home

John Ruskin, the Victorian era’s most prominent art and architecture critic, believed that buildings should deliver two kinds of goodness: doing their practical duty and being graceful and pleasing in doing it. Kim and Bob Gibson’s home in Vero Beach would fulfill Ruskin’s expectations.

The Gibsons chose Banov Architects to build a new home from the ground up, at the western end of Vero Beach in the Polo Grounds. Amy and Robert Banov are the principal owners and architects in their firm, and both are also general contractors, an unusual circumstance for architects.

Although building a home can be daunting and the process stressful, this grouping of architectural talent, luxurious setting and insightful homeowners resulted in a beautifully stylish residence complete with Ruskin’s dictates of practicality and grace.

“We’ve heard nightmares that building a home tests marriages,” Amy Banov says. “And for us, we don’t want to do battle. The first thing we do is establish a good line of communication and trust in each other. Part of the design process is doing what the client wants and not what we think they want.”

Kim Gibson had heard nightmare stories as well, “But I didn’t have that feeling, not once during the whole process,” she says.

Clear communication along with having a dual specialty in architecture and building might be the keys to a harmonious venture.

“I think that often when a lot of nightmares happen, it’s budget-related,” Amy Banov says. “As architects and builders, we are always upfront with costs, and it’s better than designing in a vacuum. We find that because we’re design/build sometimes we have a better grasp on construction costs.”

The Banovs also credit their subcontractors.

“They are behind the scenes and critical to the finished product,” Robert Banov says.

They’ve worked with McCormick Drywall Inc. for 25-years. “People don’t give the drywall guy enough credit,”Amy Banov says. And their go-to framer is Pro-Frame. “It’s not something you see visually,” Robert Banov says, “but if a house has good bones, then it’s because of a good framer.”

When the Gibsons decided to move off of the barrier island, they weren’t necessarily looking to build a home. And although Kim Gibson is a Realtor and has lived in Vero Beach since high school, they knew little about the Polo Grounds. The nine-acre gated community showcases upscale homes that, fittingly, surround a horseshoe-shaped polo ground, three times the length of a football field.

Early on the Banovs began investing in lots in the Polo Grounds and have built several homes there since.

“Polo Grounds was the first high-level community off the barrier island and we thought it was a good opportunity,” Robert Banov says.

“The first time we went to a polo match,” Amy Banov says, “suddenly, when you have eight horses running, it’s amazing how you perceive that enormous, blank field, it was incredible.”

The Gibsons’ lot, on the west side of the community, overlooks open agricultural land. “We can hear the cows mooing,” Kim Gibson says. The home is sited for maximum viewing of spectacular Florida sunsets.

The Banovs have been building homes and commercial and industrial facilities in Indian River County since 1989 when they moved to Vero from Fort Lauderdale. Robert had an architectural firm there where Amy worked, initially as a summer intern, while getting her degree. Their first project in Vero was a spec home in the Shores on the barrier island, which they sold quickly. Over the years they established themselves as a quality design/build firm for an individual clientele.

The Gibsons found the Banovs and the property purely by accident.

In 2017, they spent a Sunday afternoon attending open houses at the Polo Grounds.

“We were attracted to what we later found out were Robert and Amy’s houses,” Kim Gibson says. “Every home we went to where we liked the details the real estate agent would say, ‘It’s built by the Banovs.’ ”

For the approximate 18-month construction period, architects and homeowners worked together closely and the results are stunning: A magnificent 3,300 square foot, four bedroom, four and a half bath pool home on a half-acre lot.

The great room’s vaulted ceiling, with nonstructural, painted wood beams, is an eye-catcher.

“I love when I walk in a room and the ceilings grab you,” Kim Gibson says. “The beamed ceiling was something I had in mind. I didn’t know how to interpret it but Amy did that.”

“It could have been a big flat ceiling,” Robert Banov says, “but beams reflect the openness of the floor plan. The living room and kitchen are all one big space.”

The ceiling’s structure amplifies the room in all directions.

“There’s a lot of detail,” Amy Banov says. “All four corners [of the room] are openings to the other components of the house, from the hallway to the master, to the study, to the other bedrooms. It has a precise symmetry without really feeling like a symmetrical space. If you didn’t have order to those beams, it would be chaotic, so there’s a lot of detail to make it not look too detailed.”

And the beauty of the house is in the details.

The vaulted ceiling is juxtaposed with the clean lines of the flat-ceilinged dining area. Typically each Banov ceiling has individual elements such as the size of the crown piece, the panels, the molding. This dining room, Amy Banov says, “we developed in talking with the Gibsons. The sizes of different coffers, elongated ones over the table, there are features we’ve used in other places, but it’s always unique.”

PLENTY OF ROOM FOR ALL

Kim Gibson sourced a sizable dining table that seats 12 comfortably, and the room was designed to accommodate the large Gibson family’s frequent get-togethers.

The table and other dining room furnishings are from Décor Envy on designer’s row in downtown Vero Beach.

“The kitchen came together almost magically,” Kim Gibson says. The bifurcated counter sections, with a walkway in between, create access to the center space.

When the architects asked, “what’s important to you?” The Gibsons answered, a big kitchen.

“We have huge dinners,” Kim Gibson says. “Six children who live here, seven grandchildren, at least one night a week the dining room’s full, the bar’s full, people outside sitting. They’re all cooking and helping.”

Granite and quartzite countertops came from stone fabricators Global Stone Collection in Fort Pierce. Custom cabinets, an apron sink and multitoned backsplash fill out the kitchen, with appliances in the GE Monogram series.

All light fixtures and fans were sourced at LED Capstone in Vero Beach, including the rectangular metal fixture over the dining table, which is modern, elegant and sufficiently large for the space. And the kitchen pendant lights used a custom, white finish with cut-out design.

Outdoor living, with a view from the kitchen across the pool to the open space beyond, was another element the Banovs executed impeccably. Colorful bougainvillea offset a pergola-topped patio on each side of the pool.

The Gibsons wanted a fire pit and a fountain. On the far side of the pool, two fire and water features are filled with deep blue stones from which the fire ignites, and spouts underneath create the fountains. An additional fire pit on the south patio is where the children make s’mores during their summer visits.

The outdoor space, utilized as a second living area, has a well-equipped kitchen with built-in barbeque, sink and fridge. The adjacent dining and sitting area, complete with big screen TV, accesses the Sonos sound system that can also be controlled from several rooms throughout the house.

Automatic shutters are part of a total hurricane-prepared residence. The windows are impact-glass, and the whole-house generator activates automatically in case of a power outage. “If a hurricane came,” Kim says, “we’d just bring everything inside, lower the shutters and we’d be set.”

The large, glass double doors in the northside guestroom allow for a picture-perfect view to a pergola and a free-standing suspended swing-seat in the shade. Poolside yet private, the suite can be closed off from the rest of the home.

The Gibsons have collected several Highwayman paintings, including one by original Highwayman artist James Gibson which hangs in the master bedroom. They also collect Ray McLendon’s art, a legacy Highwayman whose father, Roy McLendon, is one of the original 26 painters of the genre.

The southside master bedroom enjoys unobstructed views to the open outdoor space beyond the property, as well as the firepit and pergola.

Enclosing the master bath are farm-style barn doors that are not at all rustic.

A large white tub is backed with turquoise-colored ceramic Glazzio tile called Andalusia, liberally veined with copper-colored variations. Dual sinks and dark cabinetry are accentuated by toe-kick under-cabinet lighting. His and hers walk-in closets occupy one side of the room with a double-side entry shower on the other. The subtle blue pebble floor gives the shower room a touch of color.

A detached three-car garage is connected through a breezeway. “The front entrance is for guests,” Amy Banov says, “but the homeowner uses another entrance every day.” The Banovs’ signature drop room is a transition space for the homeowner, a place to drop your things and take off or put on your shoes.

“We like to have clients enter their home into a place that is not a laundry room,” Amy Banov. “We wanted to make it a fun space,” Robert Banov says, “more personalized.”

Quality work, experienced subcontractors, exceptional setting all add up to success. And polo in the community enhances the specialness of the residence. On Sundays, match-day, the grandchildren particularly enjoy watching the fast-paced action as horses and players battle on the open grass field that anchors the community. 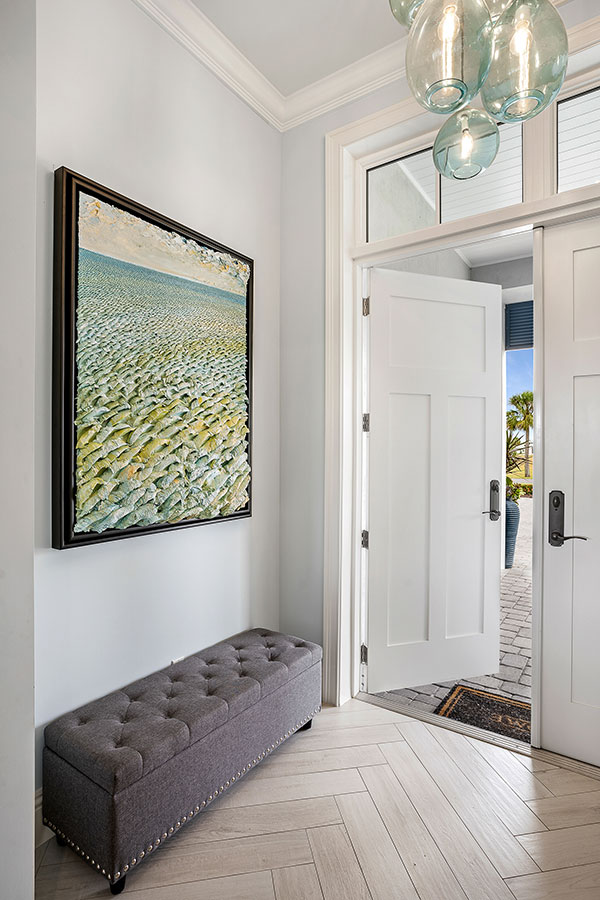 A double-door entry was the perfect space to showcase some of the fine art the Gibsons collect. The Francis Mesaros piece typifies his technique of three-dimensional art. 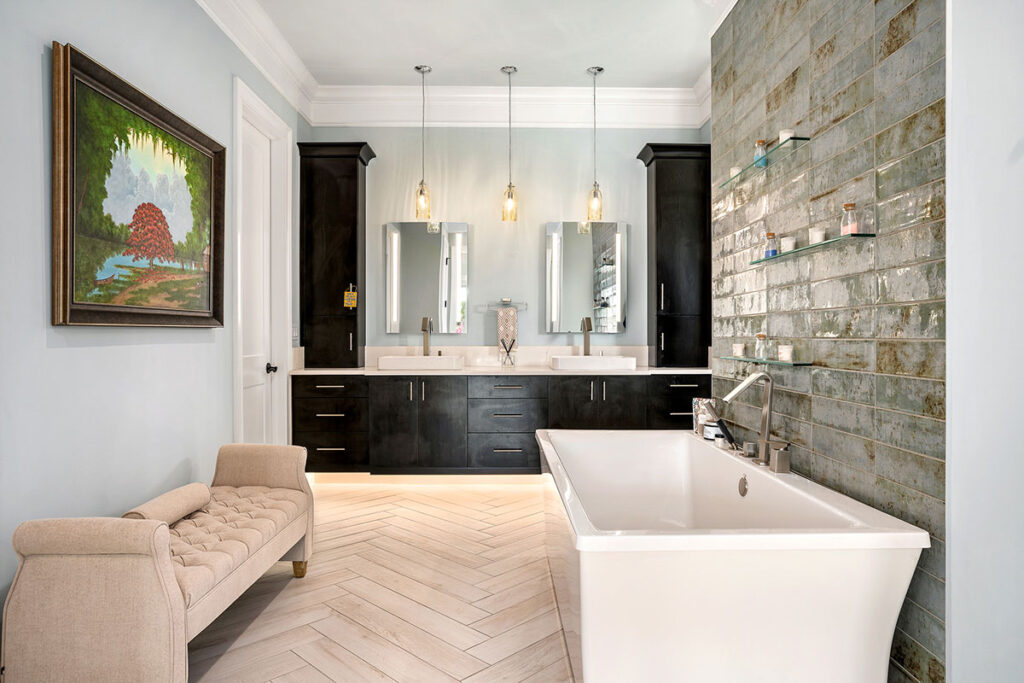 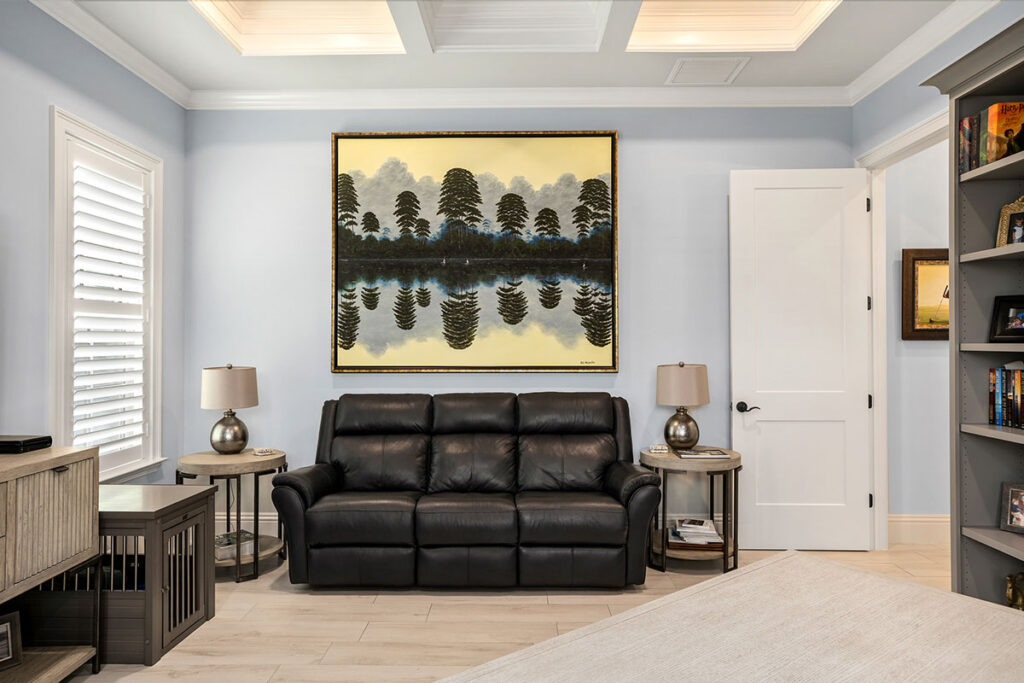 The office, or study, was Bob Gibson’s only requirement, to have a place of his own in which to work. This large painting, by Ray McLendon, is one of several Florida Highwaymen paintings in the home. 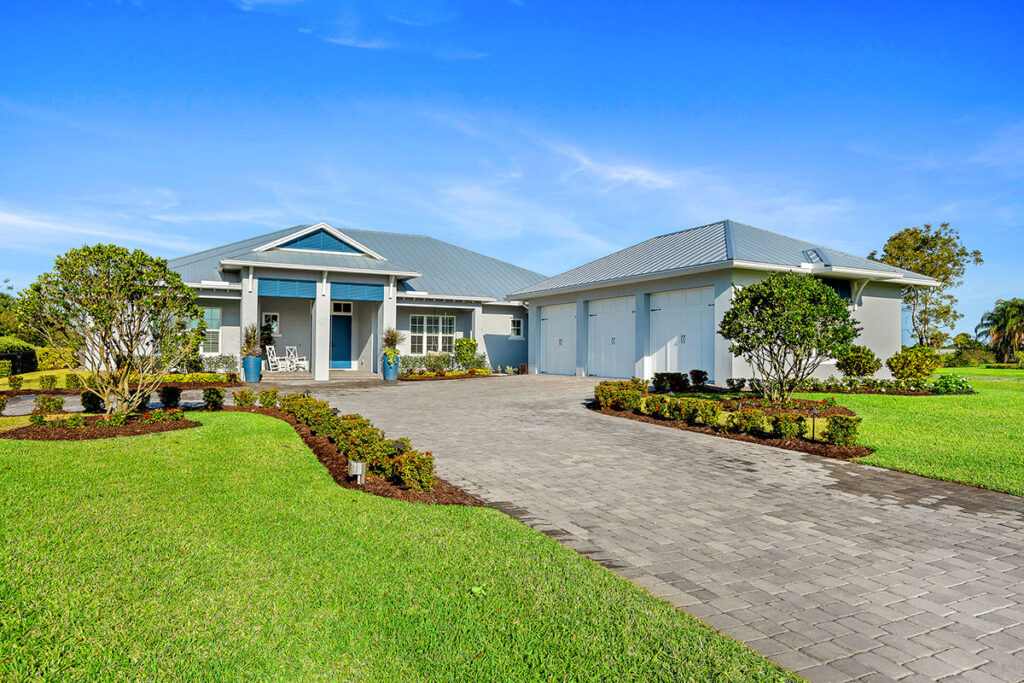 The Gibson’s 3,300 square foot home is in the unique community of the Polo Grounds in Vero Beach, where polo matches are played on Sundays during the season. 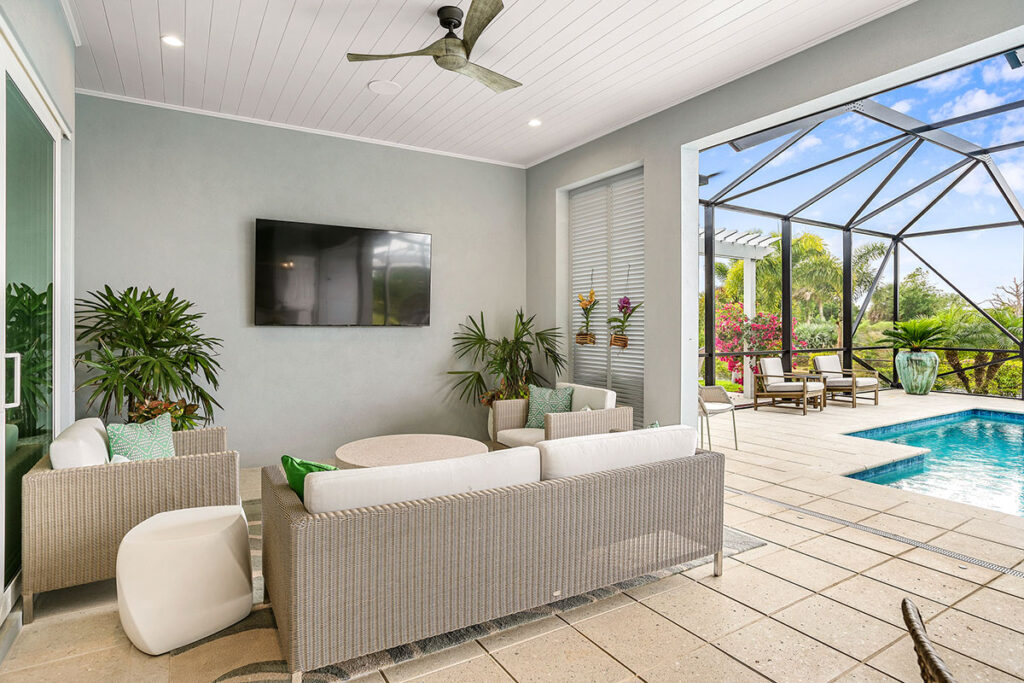 The outdoor living area just off the pool feels like resort living. Entertaining, dining and cooking areas open to views that offer privacy and serenity. 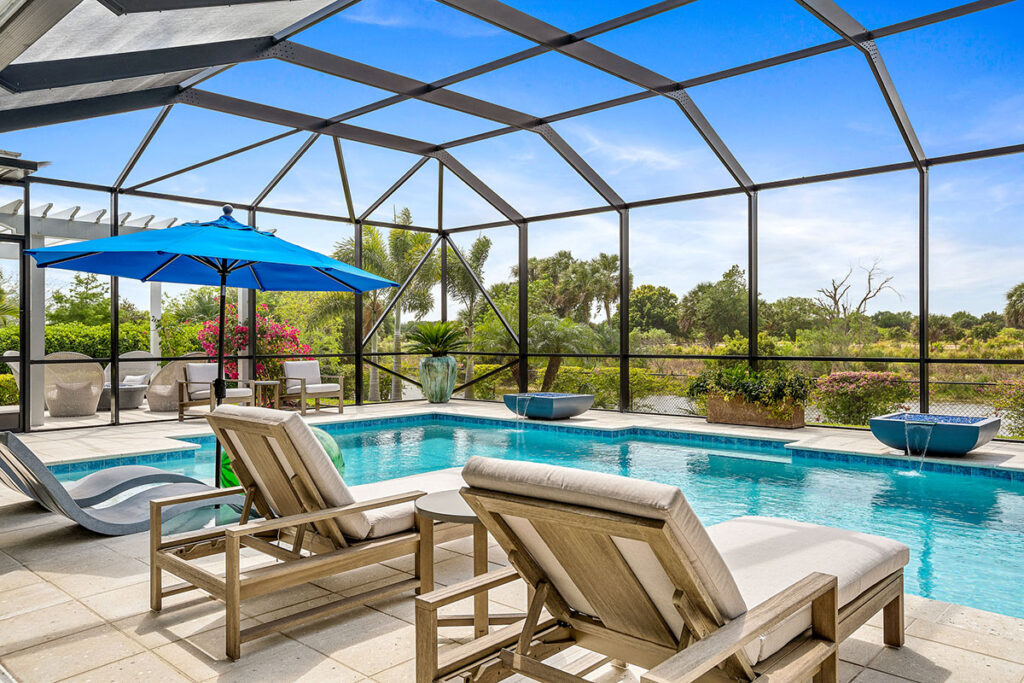 The pool area, which includes two fire pits that double as fountains, is anchored on either side by impressive white pergolas that provide the Gibsons numerous outdoor areas where they can relax and entertain.
Please follow and like us: