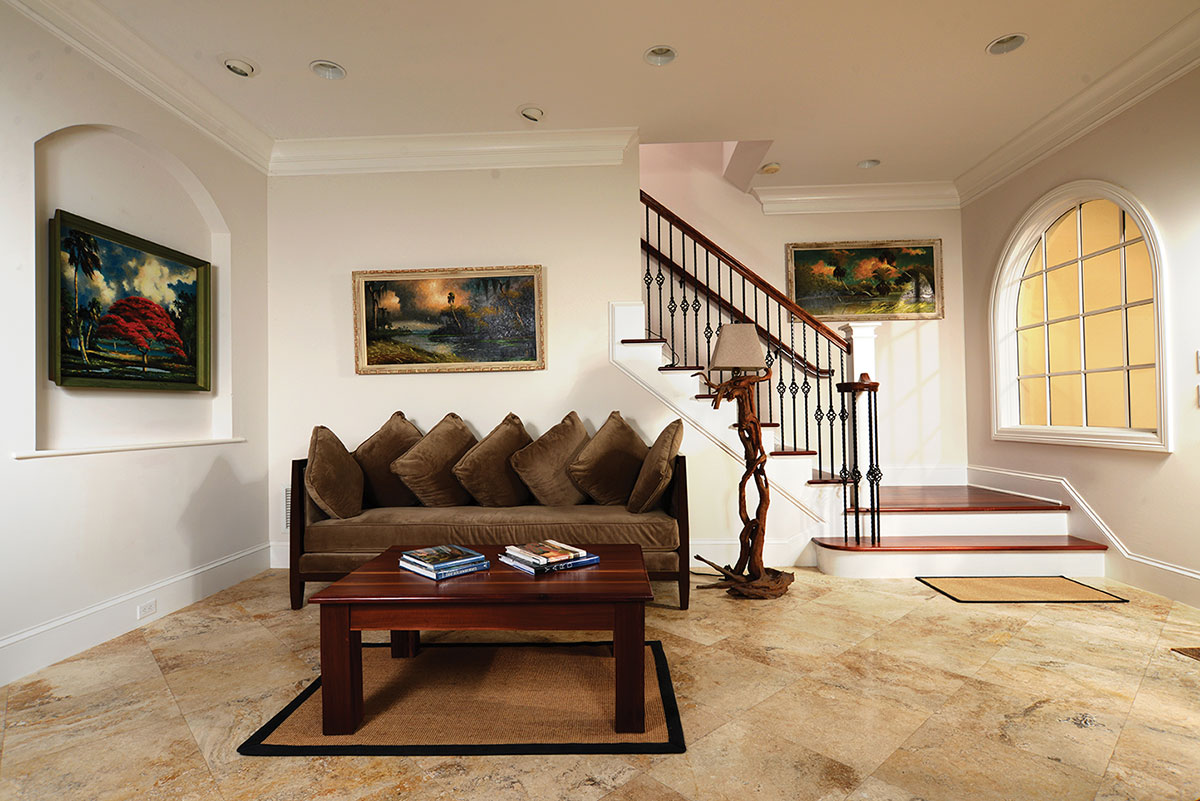 The house, built in 2007, features many Spanish Colonial elements, including ironwork and marble flooring shown in the living room. A niche showcases one of the more than 250 paintings the couple own.

It is rare when a homeowner cares as much about what goes on the walls as how the walls are built, but that sums up Roger and Pattama Lightle’s Vero Beach house. It is a testament to solid construction techniques and the perfect gallery space for the couple’s stellar collection of Highwaymen paintings.

Roger carefully constructed the house on a lot in a wooded neighborhood in Vero Beach specifically to showcase the paintings he has been collecting for years. His collection is so notable that it was the basis for an exhibition at the Vero Beach Museum of Art in 2013 and another that he will curate at the A.E. Backus Museum & Gallery in Fort Pierce that opens Feb. 17 and runs through March 11.

Roger, who owns Lightle Construction Inc. and recently retired as a lieutenant with Indian River County Fire-Rescue, attributes the success of melding two of his passions to Vero Beach architect Gregory John Burke, who designed a spacious, welcoming and sturdy home in a small footprint.

“The Lightle residence was designed to respond to a tight site that was zoned for multi-family development,” says Burke. “The concept was for a compact home with a single-car garage that conveyed the image of a much larger home.” The architect used the home’s Colonial Spanish style to highlight Roger’s appreciation of genuine construction materials. He also designed the home with as much wall space as possible.

“I look at it as a generational home,” says Roger, 57. “A lot of houses don’t stand the test of time.” He used timeless materials, including pecky cypress, mahogany, marble and granite for the finishes in the home and included something you don’t see very often in Florida houses — four custom-made fireplaces with a fifth outdoors.

Since he and Pattama often invite guests in at the spur of the moment to see their collection, the house has none of the detritus of everyday living. The 3,000-square-foot home is kept neat as a pin, with simple, classic furnishings that make the perfect subdued backdrop for the riot of color in the paintings. The couple also sell Highwaymen paintings as Highwaymen Art Specialists Inc.

Roger, who moved from Hollywood, Fla., to Fort Pierce in 1976, where he lived in St. Lucie Village, began collecting the paintings 16 years ago before the artists became recognized as the “Highwaymen.” His current collection includes many significant paintings by the artists, some with surprising subject matter, while others demonstrate the true artistry of the painters, particularly that of Harold Newton and Alfred Hair, considered the most influential of the group.

One can wander from room to room and view the paintings of palm trees and ocean, blooming Royal Poinciana trees, the Florida backwoods and the Indian River.

Because of the collection, the house’s security system is bank-like with a state-of-the-art system in place. That safety begins at the front door, where the grand 8-foot high mahogany French doors allow light to flood in, but have a 9-point locking system.

Structurally, the house is a fortress, with no wood used. Concrete was poured into place for the two-story house and included the forms of the eight exterior arches, including the radial windows and doors where high-impact glass, rated to withstand winds up to 140 miles per hour, was used. Lightle says he employed the same construction techniques that he used on the multimillion-dollar homes he constructed in the high-end Vero Beach development of Windsor.

The home’s interior is equally substantial. In the living room, the fireplace has a thick mantle of carved pecky cypress. The surround is hand-carved stone inset with black granite. The graceful curved plaster above the mantle was fashioned by hand. Lightle himself laid the herringbone pattern of brick inside the firebox.

The living room has a lighted niche for displaying paintings as well as another display area above the sofa.

Open to the living room is the dining area with a window that looks out to the back patio and pool. It provides additional wall space for more paintings.

Burke kept the kitchen intentionally compact to maximize the gallery space, but it has no less dazzle than a kitchen twice its size. Mahogany cabinets and professional-grade appliances, including a Sub-Zero refrigerator and Viking gas range make it a cook’s dream. The countertops and backsplash were made from stunning bamboo-green granite.

The kitchen is open to the family room, which has several outstanding features. The ceiling is tongue and groove pecky cypress with richly-colored Brazilian cherry hardwood floors. Roger, who began working as a mason as a young man, built the rustic fireplace using reclaimed granite from an old building that was being torn down on State Road 60.

On the second floor is a guest bedroom and another family gathering space that has a mitered pecky cypress ceiling and a simpler fireplace with a pecky cypress mantle. Adjacent to it is an office space with a balcony that overlooks the pool area.

The spacious master bedroom suite has another fireplace and another pecky cypress mantle. The adjacent master bathroom features a whirlpool tub and a long dual-sink vanity made of mahogany and topped with black granite.

Substantial crown molding and 10 feet high ceilings used throughout the home add to the home’s grandeur.

But while the construction is impressive, the paintings that hang on the walls are the most engaging. Each one tells a story, and both Roger and Pattama know the stories.

Most of the paintings are displayed in their original handmade frames fashioned by friends and helpers who worked for some of the artists. Some of the paintings are considered to be such iconographic Highwaymen images that they have been published in books about the Highwaymen. Some dispel the notion that the artists made paintings only to sell and reveal hints about the lives of African-Americans living in the South before the Civil Rights Act of 1964 was enacted.

Many are extremely rare, particularly given that the artists were known for being prolific and doing the same subject over and over. One painting by Newton from 1957 depicts a boathouse and a figure standing next to two wooden boats on the banks of the Indian River. It comes in its original “Lincoln-notched” frame, a frame made from molding that was embellished with notches by a friend of Newton’s named Lincoln.

For Roger and Pattama, having a house that is both a home and an art gallery is one way they can share the story of the Highwaymen.

“Some might hesitate to have people coming into your house to see the paintings, but for us, it is important to get the message out there,” says Roger. “These paintings are beyond a Florida and American treasure and it is time they are recognized for what they are.”