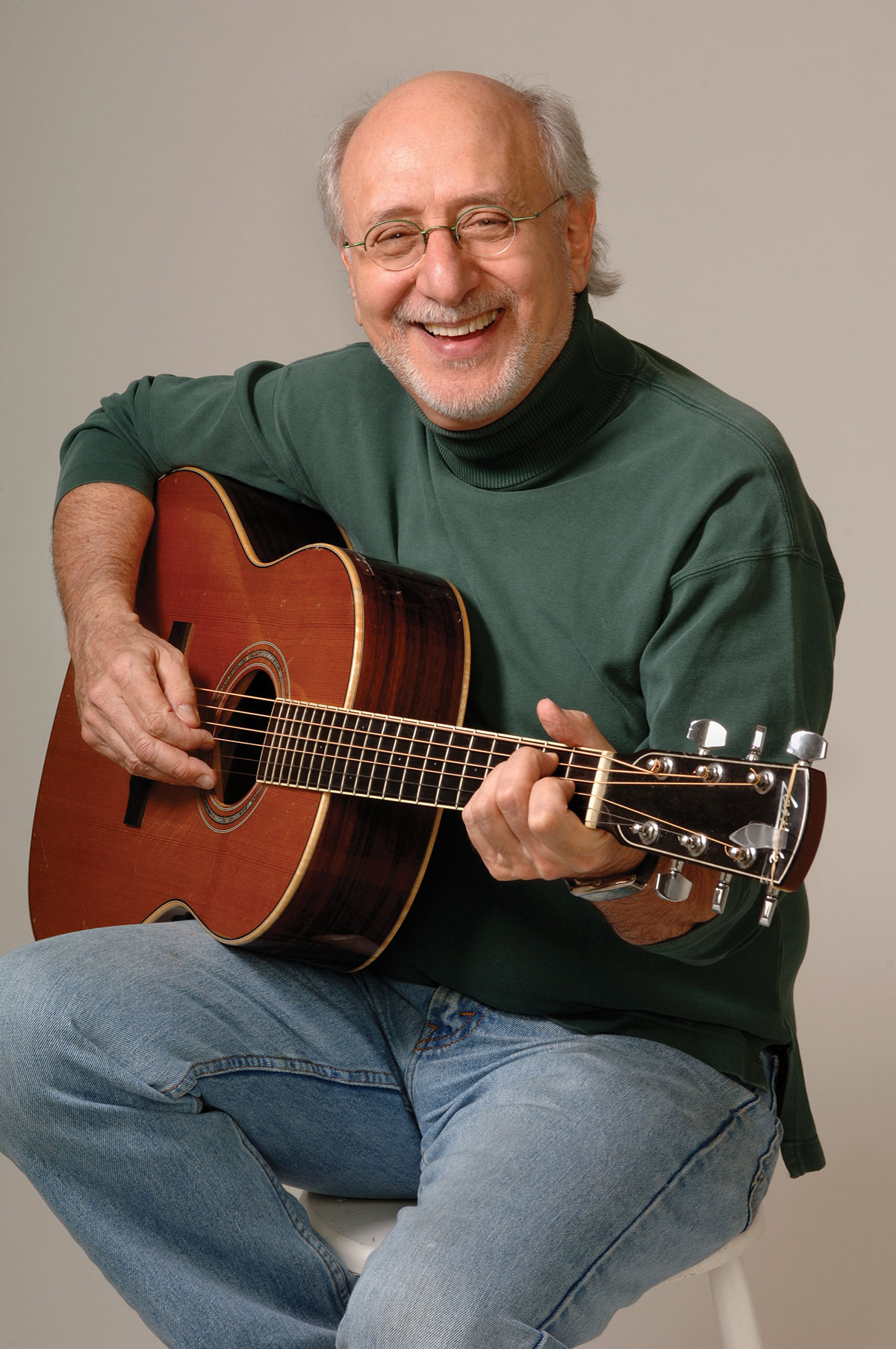 Peter Yarrow says he will sing the Peter, Paul and Mary repertoire during the first half of his concert in Vero Beach in January and then take requests during the second half.

No musical group embodied the spirit of 1960s activism more than Peter, Paul and Mary. Together, they performed over a half-century, compiling a song book that includes Lemon Tree, 500 Miles, Where Have All the Flowers Gone?, Blowin’ in the Wind, Puff the Magic Dragon, Leaving on a Jet Plane, I Dig Rock and Roll Music and Day Is Done. Though Mary Travers died in 2009, Peter Yarrow and Paul Stookey [known as Noel Paul] continue to perform, both as soloists and as a duo. Yarrow made a solo appearance at the Emerson Center in Vero Beach on Jan. 13.

Based in Telluride, Colo., Yarrow, 77, performs some 150 concerts a year and is also active with Operation Respect, an organization he founded that promotes tolerance and civility among children of school age. The writer of one of Peter, Paul and Mary’s greatest hits, Puff the Magic Dragon, Yarrow also has embarked on a late-life career as a children’s author whose books are based on the song Yarrow co-wrote with another student while at Cornell in 1959. He talks about the origins of the song and other topics during an interview with Indian River Magazine Publisher Gregory Enns.

Q. What can concert-goers expect when you play at the Emerson Center.

A. It’s like a Peter Paul and Mary concert in a lot of ways. My repertoire is Peter, Paul and Mary. It’s a legacy of many, many decades now. The difference is that I’m singing alone. I sing the Peter, Paul and Mary repertoire but what I enjoy most is having the audience sing with me. Being a stalwart of the Pete Seeger variety, I’ve always used music as vehicle for creating community not just metaphorically but literally.

A. It’s truly the sentiments, feelings and perspectives that have so defined the ‘60s. It’s the soundtrack of people’s conscientious, their activism, their participation in society in positive ways. When I sing it’s kind of a cross between a concert, a party, a peace rally and the history of my experiences.

Q. Everybody knows the standard Peter, Paul and Mary repertoire. But what were some of the most underrated songs?

A. There are a lot of songs that didn’t catch fire, but they had very special meaning for people. The Great Mandela has a very select audience in terms of people who were moved by it. Light One Candle is a Hanukkah song. Another song Sweet Survivor is about continuing the work in spite of all the things we are challenged with in the world — the good fight as we used to call it. People will be able to hear some of these. In the first half [of the performance], I sing the concert. In the second half, I only sing requests.

Q. If you were asked to select just a few anthems that embody the spirit of Peter, Paul and Mary what would they be?

A. What we always ended our concerts with: If I Had a Hammer, Blowin’ in the Wind and This Land is Your Land.

Q. When you listen to Peter, Paul and Mary without watching on video, how can you distinguish between your voice and Noel Paul’s?

A. I sound like me and he sounds like Noel. It’s not an anonymous combined sound. Noel’s background was not folk music where Mary’s and mine were. We would always shift around on who’d sing lead. It’s not vocal quality the defines us as much as the heart and intention in the way it’s performed. That’s really the story.

Q. Looking back on those PBS specials with clips from the early days, it seemed like the music really overtook Mary both physically and spiritually.

A. She was so physically expressive you could really feel [the music] so beautifully and powerfully. She was a force of nature, a terrifically dedicated, powerful purveyor of the idiom. We all felt the music was taking a back seat to the message — what we were trying to communicate. That really drives what we did.

Q. Because of your social activism over the years, you must be ecstatic about the candidacy of Bernie Sanders.

A. I love Bernie. I’ve always loved Bernie. I think he’s done enormously important things in terms of focusing the national dialogue around issues of great importance. I think his chances of getting elected aren’t good. It’s irrelevant that he calls himself a Democratic Socialist, but I do believe Hillary has extraordinary experience and she revealed the depth of her command in the first debate. I’ve learned to be a pragmatist in terms of the political world. The worst thing I did in 1968 was not support Hubert Humphrey [after he beat liberal Gene McCarthy in the Democratic primary] and we got Richard Nixon. I will be supporting Hillary and I suspect Bernie will throw his votes to Hillary.

Q. Only because my journalist friends will ask me if I asked “the question,” tell me about the inspiration for Puff the Magic Dragon.

A. It’s not about drugs. It was written in 1959 when I was at Cornell. There was no grass, there were no drugs. Even if I had the intention of writing a song about a dragon with marijuana in the subtext I wouldn’t have had the context to do it in 1959. Years later I could have done it but not then.

Q. What is Peter, Paul and Mary’s legacy to American music?

A. We became the bridge between traditional folk music and the American public in a musical sense. In a more important sense, we lived a life that was committed to using music as a tool for making the world a better place.