On the Front Lines

Several years ago, Port St. Lucie pulmonologist Mark Pamer read something that planted a seed in his mind and has likely saved thousands of lives in the last year alone.

Robert Barry’s book, The Great Influenza, about the 1918 influenza pandemic fascinated and terrified Pamer and it got him wondering about what would happen if such an infectious agent ever returned.

In March 2020, his devastating question was answered with COVID-19 killing people as swiftly as influenza had just a century earlier.

While the world became a veritable ghost town as people struggled to navigate the global lockdown and medical professionals became overwhelmed and sick themselves, Pamer considered leaving his practice and young family to volunteer in New York City, the epicenter of the virus.

“I was absolutely inspired to come help, to live my obligations as a physician and a Catholic man,” he says. “I knew in my heart that if I didn’t help, I would always be disappointed in myself for not stepping up to help when my skills were most needed.

“I despise the possibility of finding myself in the ‘I wished I had’ or ‘I could have’ or ‘I should have,’ so I talked to my wife and employees, and we all agreed that going to New York was the right thing to do.”

Pamer’s first volunteer assignment was at Elmhurst Hospital in Queens.

“Elmhurst Hospital had over 170 intubated patients in the hospital and much of it had been transformed into a giant ICU,” Pamer explains. “It was like a war zone. It was like being in a different country. New York had become a ghost town. The airport was empty. The taxis had the fronts and backs taped off to prevent air passage. The streets were empty. The subways were empty. No one was working. Almost every business was closed. Everyone stayed inside. No one came out.

“Anyone you did see wore a mask and stayed away from others. It was a plague and with so many dead and dying every day, you could feel the seriousness in the air as surely as you could see and smell.”

“When I saw this and felt it that very first day, even before starting in the hospital, I knew I had made the right choice. It was one of those rare moments of true inspiration and humility to know you are truly needed and you can really help your fellow human beings.”

In the beginning, the most difficult thing Pamer had to deal with was watching patients die alone.

“There was so much fear. There was so much death. The death toll was the most difficult thing to witness,” he recalls. “People just kept dying, sometimes over a dozen a day. What do you do when you run out of ventilators or supplies? What do you do when there isn’t anyone else available to help or to come in and relieve you? You just keep going, keep giving, but it’s exhausting. Patients just kept dying. It was awful. Early on, almost no one lived. That was really hard.”

Despite the tragedy, there were moments of utter celebration.

“For those that lived, it was glorious,” he says. “We lined the halls and applauded for the few survivors that were discharged from the ICU.”

Those moments provided inspiration to go on.

“I get to help people for a living. What better job is there? I get to help someone and create a meaningful, everlasting symbiotic bond between two or more humans,” Pamer says. “Life at all stages should be valued. I love having the skills to help someone heal and get better, and if I can’t do that, it’s rewarding to help someone pass away at the end of their life with dignity and not be alone.

“I’ve prayed with dying patients and families, laughed with them, cried with them, hugged them, and kept in touch with some of them. To me, this is the greatest job in the world. I can’t imagine doing anything else.”

After New York, Pamer returned home to numerous calls for help from many places desperate for help.

“I ended up choosing Texas as they could use me one week a month, which still gave me three weeks at home with my family,” he explains.

Pamer first worked in a small town named Beaumont. After that he went to McAllen, which is just north of the Mexican border.

“The town was devastated by COVID and the hospital I came to had set up two entire buildings as makeshift ICUs to take care of COVID patients,” he says. “Like New York, it seemed like it was a large MASH unit. Everyone used full barrier precautions; everyone took this deadly serious. It was intense.”

Helping to cover other geographic areas created its own challenges back at home when Pamer returned to his practice.

“It’s hard being away a week and working so many hours and still having to run a business so far away,” he says.

There were messages to answer, work and sleep to get caught up on, and bills and salaries to pay.

“I trust my office manager and staff when I am gone because they are genuinely dedicated and all are truly excellent people, but it is still hard on us all when I am gone, and my patients are ready for me to be back in the office full time,” he explains.

In addition to volunteering his professional service during the pandemic, Pamer’s office was responsible for vaccinating more than 10,000 people.

“I’m really proud of that,” he says. “We can’t say how many of those 10,000 people lived because they got vaccinated, but it’s a real number. We will never know who those people are, but they’re real. Who knows what they’re doing, but they’re alive and doing it. I love that. We saved some lives. What greater good is there in the world?”

Pamer, who is a huge proponent of volunteering, says there is always a need for volunteers locally and nationally.

“Locally, in St. Lucie County, health care professionals volunteer at the HANDS clinic to help people, but even for those who are not medical professionals, there are so many volunteer areas: churches and places like Sarah’s Kitchen always need help in their soup kitchens to feed the poor.”

He says it’s all up to the individual.

“Decide who you are. What do you stand for? If you want to volunteer, decide how much time you have to give, then call or email places. Then just do it. Take action. It’s the greatest feeling to give freely and help another. You will get so much more out of it than you put into it,” Pamer says.

“I find so much inspiration from Matthew 25:31-45, helping people without any thought or care for who they are. It refreshes you spiritually and physically. At the end of this life, I just hope I get to take the up escalator.” 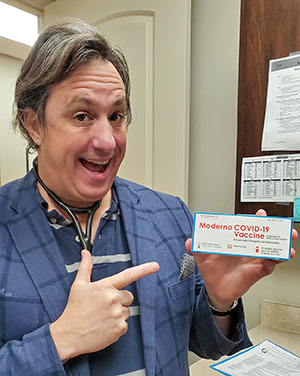 After months of tragedy and death, Pamer celebrated the arrival of the first COVID-19 vaccines on the market. 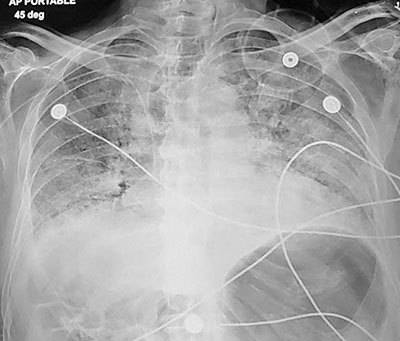 Adding to the fear during the initial months was seeing how mercilessly the virus attacked normally clear lungs with an unprecedented speed and ferocity. 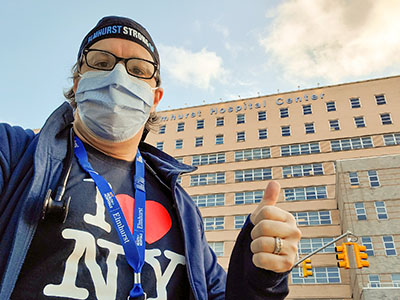 Pamer’s first volunteer assignment was working in a hastily created ICU at New York City’s Elmhurst Hospital where over 170 patients were intubated.
Please follow and like us: