Most women in their early 20s are just figuring out what to do with their lives. But Lt. j.g. Karida Harris, 24, was recently promoted to commander of the USCGC Ibis stationed at the Fort Pierce Coast Guard Station establishing her as one of the youngest commanders and only the second African American woman to achieve such an honor.

“I knew from a very early age that I wanted to join the armed forces, but I wasn’t sure which one,” Harris explained. “I had the desire to do something that had nothing to do with money and everything to do with helping others. I considered the Navy, but when I learned about all the opportunities that the Coast Guard offered and the duties they performed, I knew it was for me.

“I love the smaller service where everyone knows everyone and they truly care about each other. Plus, while other services spend a lot of time preparing, we do our exciting jobs, like rescuing people and patrolling our shores, each and every day.”

Harris was raised in a working-class neighborhood in Baltimore, Maryland, where she lived in a modest home with her mom, dad, five sisters and two brothers.

“I am very grateful for the opportunities I’ve been given and the education I received via the Coast Guard,” she said. “I wanted to set an example for my siblings and show them that you don’t necessarily need to be a product of your environment.”

RECRUITED FOR ACADEMY
Harris was recruited right out of high school and was deployed to the Coast Guard Academy in New London, Connecticut, where she spent four years studying government with a focus on international relations. After receiving her Bachelor of Science degree in 2018, she was commissioned to serve the next two years on the USCGC Valiant stationed at Mayport. The next promotion brought her to Fort Pierce as the new commander.

“It’s an honor to be entrusted with such responsibilities so early in my career,” she said. “The crew of the Ibis is committed to each other and the American people and they’ve welcomed me with the utmost respect. There are 11 of us, eight men and three women, who command the ship and we are like family.”

The Coast Guard, like the other military services, has struggled with diversity for decades and has long been dominated by white men. Women make up almost 15% of the Coast Guard’s active-duty force, while men make up 85%. The percentage of African Americans is even lower, fluctuating between 6% and 10%. Harris, as an African American, is an anomaly who has defied the gender and racial odds and broken through the glass ceiling for female commanders.

“I’ve never experienced any prejudices within the Coast Guard and the organization does everything possible to promote racial and gender equality,” she said. “When anyone experiences prejudice in the military or in the country for that matter, it affects everyone. The Coast Guard has developed an acumen regarding diversity inclusion and encouraging people to talk about it.”

PATROLLING THE COASTLINE
Harris and her crew spend a lot of their time patrolling the coastline looking for smugglers transporting drugs, contraband, firearms and people. A lot of the trafficking comes from the Caribbean countries through the Straits of Florida, which can be very dangerous as the Gulf Stream can get rough and treacherous very quickly.

“We perform just as many rescues as we do seizures, as we bring the passengers on board to safety,” Harris explained. “We also board recreational boats and make sure they adhere to safety regulations. We do it to save lives because the ocean can be fickle and it’s important to be prepared for an emergency. Every day brings a new adventure.”

The station, which was built in the early ‘70s, houses about 40 guardsmen, two Response Boat Mediums and two Special Purpose Craft Law Enforcement boats and provides dockage for Coast Guard cutters. The station is built just a block west of its original location at 1400 Seaway Drive. The original structure, built in 1942, still stands proudly as the home of Coast Guard Auxiliary Flotilla 58 whose members support the Coast Guard with vessel safety checks, marine recreational boating safety visitations and radio and aviation operations.

“The location was chosen because geographically it makes sense,” said Boatswain 1st Class Ray Martin, a 17-year Coast Guard veteran. “Our station is in charge of patrolling the waterways north of Sebastian down to the Stuart inlet. Lake Okeechobee is also under our jurisdiction. All the stations work together however, and we’re sometimes called to assist Station Cape Canaveral and Station Lake Worth Inlet with their missions. We are all part of Sector Miami.”

LONG AND STORIED HISTORY
The Coast Guard’s history dates back to the post-Revolutionary War, making it the longest continuous sea service in the nation. Alexander Hamilton, the first Secretary of the Treasury, was having difficulty paying off debt from the American Revolution and needed to find a way to collect debt through tariffs. Since many Americans had become proficient at smuggling during the war, Hamilton and George Washington proposed that Congress appropriate funds to build 10 cutters to patrol the waters and enforce tariff regulations. On Aug 4, 1790, the funds were approved and the Revenue Cutter Service was born.

The formation of Fort Pierce’s Coast Guard Auxiliary Flotilla 8 dates back to the critical years of World War 2 when volunteer members participated in serving the country by joining forces with the Coast Guard as temporary reserves. Their meetings were held in a small tin-roofed building on the Fort Pierce Harbor just down the inlet from the Coast Guard station.

During the first few years, some of its members would patrol the South Hutchinson Island beach from the inlet to the Martin County line. Many had full-time jobs and would spend all night walking the beach. Back then, the mosquitoes were brutal and the members quickly changed from foot patrol to mounted horseback to avoid the mosquitoes’ wrath.

Members also used their own boats to patrol the sea, but since they were not equipped with marine radios or navigation equipment they could only venture out as far as they knew there would be enough gas to return to port. Flotilla 8 performed many rescues at sea and patrolled the waters to prevent looting of wrecked vessels.

In 1943, the flotilla was offered space on Pelican Yacht Club’s property. It built a small structure using lumber from demolished buildings and continued to operate out of that base for the next 27 years.

AUXILIARY’S NEW HOME
Then, in 1973, with the help and support of Station Fort Pierce and Miami Sector, it was granted the use of the Old Boat House/Garage on the west side of the old station. Built in 1936, it required major repair. It has been fully restored and is the only restored structure from the wartime Coast Guard Station and is the home of the Coast Guard Auxiliary Flotilla 8.

As the nation’s maritime first responder, Coast Guard personnel search and rescue persons in distress, minimizing the loss of lives and rendering aid to those in need. It is also responsible for directing the removal and mitigation of oil and hazardous substances from spills and releases in the waters and shorelines of coastal zones.

Additionally, the Coast Guard develops and enforces federal marine safety, security and environmental regulations and can often be seen boarding recreational vessels for safety inspections and commercial vessels for documentation and compliance.

With its diverse scope of duties, the Coast Guard offers exciting career opportunities for men and women who prefer the high seas to land.

“I chose the Coast Guard because I wanted to do something meaningful,” Harris said. “I came from humble beginnings and through the Coast Guard was able to complete a four-year college degree. Every day brings a new adventure on the water. Now I’m traveling the world and living
my dream.” 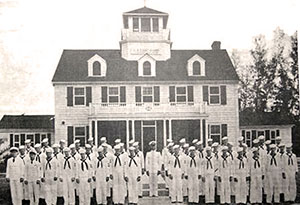 The formation of Flotilla 8 was formed during the critical years of World War 2. The new members joined forces with the United States Coast Guard to protect the Florida coast. USCG AUX FLOTILLA 58 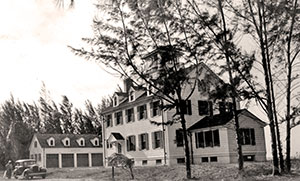 Members of the USCGA worked out of this building on the Fort Pierce Inlet pictured in the book Images of America, US Life-Saving Service Florida’s East Coast. NATIONAL ARCHIVES