On course for college 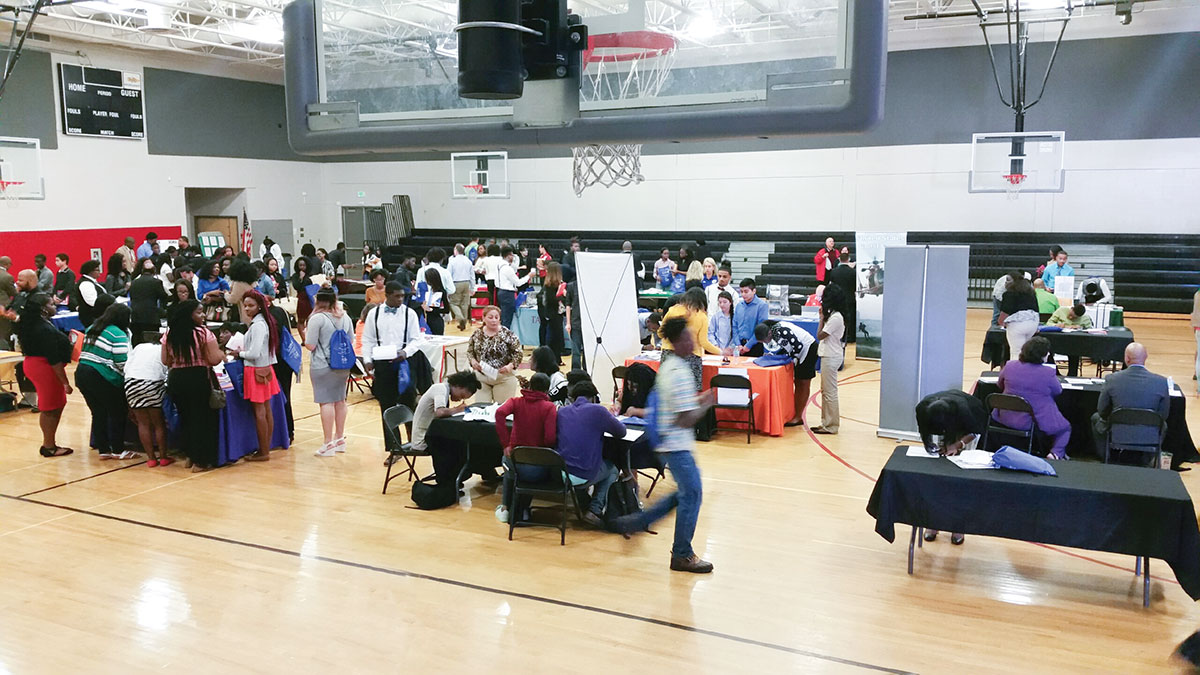 High school seniors from around St. Lucie County walked into a college fair recently with high hopes and plenty of dreams. By the time they left, more than 300 offers of admittance were made by colleges and universities from the southeastern United States along with $6 million in scholarships.

“It surpassed all expectations,” said a delighted and surprised school district spokeswoman Kerry Padrick. “This was our first year for this fair. While we tiptoed into it this year, Lynda Octavi (program specialist) and Kevin Perry (assistant to the superintendent) are already working on making it two days next year and including one evening.”

The students’ success at the January fair is likely to inspire next year’s seniors to try for on-the-spot admissions and scholarships even if they aren’t sure they want to go to college, some of the high school participants said.

“It was a wonderful idea because many of my classmates would not have been exposed to the idea that they too could go to college,” Fort Pierce Central senior Stephan Snead said.

DIFFERENT KIND OF FAIR
Open to all seniors in the school district, the fair differed from previous events in that it did more than provide information. Representatives met students, evaluated their accomplishments and made offers.

Fourteen of the 107 schools that have been designated by a federal program as Historically Black Colleges and Universities and Hispanic-Serving Institutions sent representatives to the Samuel S. Gaines Academy gym in Fort Pierce.

Advisers from the Coast Guard and the Army National Guard, Greek fraternities and sororities, the school district’s Promise is a Promise program, Wells Fargo and the state Education Department also attended. The Promise is a Promise program guarantees students an instructional job in the county’s public schools if they return home after college. Twenty-two students signed up at the fair.

Treasure Coast High School senior Aaliyah Brown, 18, said meeting the college representatives all in one place was a huge advantage, both for herself and for her fellow seniors.

“It was having that personal experience that transcended the standard phone call to an admissions office,” she explained.

MULTIPLE OFFERS
She was brimming with excitement when she told her mother of the multiple scholarship offers totaling $743,260. Florida A&M University, one of her top choices because of its pre-med program, offered $81,540. In a partnership arrangement, students in FAMU pre-med who do well and pass required tests with good grades can qualify to enter medical school at Florida Atlantic University. Only 10 students are admitted to the pre-med program each year.

“It was a shock that I could walk away with hundreds of thousands of dollars worth of scholarships,” she said. It will be awhile before she is sure which school she will attend.

Stephan Snead, 18, from Fort Pierce Central High School, was thrilled to be accepted to both Alabama State University and Bethune-Cookman University. He’s still trying to decide which is the better choice. He wants to produce music and will concentrate on musical recording technology, learning about soundboards and recording technology, he said. Snead also wants to be a singer.

Keith Davis, 18, a senior at Treasure Coast High School, was offered a scholarship of more than $100,000 including room, board and books from Alabama State University and $7,000 by Edward Waters College in Jacksonville. He was also accepted at Florida A&M University and Florida Memorial University in Miami Gardens. He’ll most likely choose Alabama State, he said.

Brown wants to be a doctor who specializes in geriatric patients.

WORKING HARD PAYS OFF
“My grandparents died when I was young, and my parents wanted to make up for that so they took me to nursing homes so I could have that experience of grandparents,” Brown said. “The people I met were the most embracing people. It was so fulfilling to talk to them and hear their stories. I want to make a difference in the lives of older people.”

She works hard in school, is focused and described herself as “very, very ambitious,” motivated by parents who told her that it was up to her to get what she wants through education. She is in dual enrollment with Indian River State College and will graduate with an associate degree and her high school diploma this year. Her grade point average is 3.9; weighted it is 5.27.

All of the high schools offered training to students planning to attend the college fair. Brown said she went to seminars with performance and life coaches who talked about how to dress, speak and act when interacting with college representatives. She was confident going into the fair but unsure what she would take away.

TRAINING PREPS STUDENTS
Snead said he appreciated the pre-fair training he received. “I was nervous going in because this was a room full of opportunities for me, but I was ready,” he said. “I felt confident.” He dressed for success with a button-down shirt, blue cardigan, khaki pants and brown dress shoes.

The music recording field Snead plans to enter requires a good deal of technical knowledge so choosing the right school is important. He said he told his mother, who is a teacher, first “because she always wants me to be successful.”

He plans to go to Indian River State College first and then to a university.

Keith Davis wants to go into the medical field but hasn’t chosen a specific career path yet. He said his pre-college fair training helped build his confidence when talking to people. “And when I got my first offer, it made me feel like I wasn’t working for nothing for all of these years in school. I didn’t expect it to be so easy.”

He’s had his eyes on college since he attended kindergarten, he said. Both of his parents went to college.

“This college fair had a big impact on me,” he said. “I was already looking at HBCU colleges and this opened the door to many more opportunities. And that was cool. I want to tell next year’s juniors that they should make very sure they are prepared.”

High school students were not the only beneficiaries of the college fair. Sixth-graders who participate in a college prep program at Samuel S. Gaines Academy had a chance to see that a college education is something they can aspire to.

The Gaines program attempts to show young students future possibilities, Padrick said. That helps them to choose the right courses in high school so that when their moments come at the college fair, they too might be accepted to a college and receive a scholarship offer.

COLLEGES/UNIVERSITIES AT THE FAIR*

*Note: Indian River State College, while not an HBCU or HSI, was also present at the College Fair. Sixty-one students filled out interest cards so that the college could get back to them later.