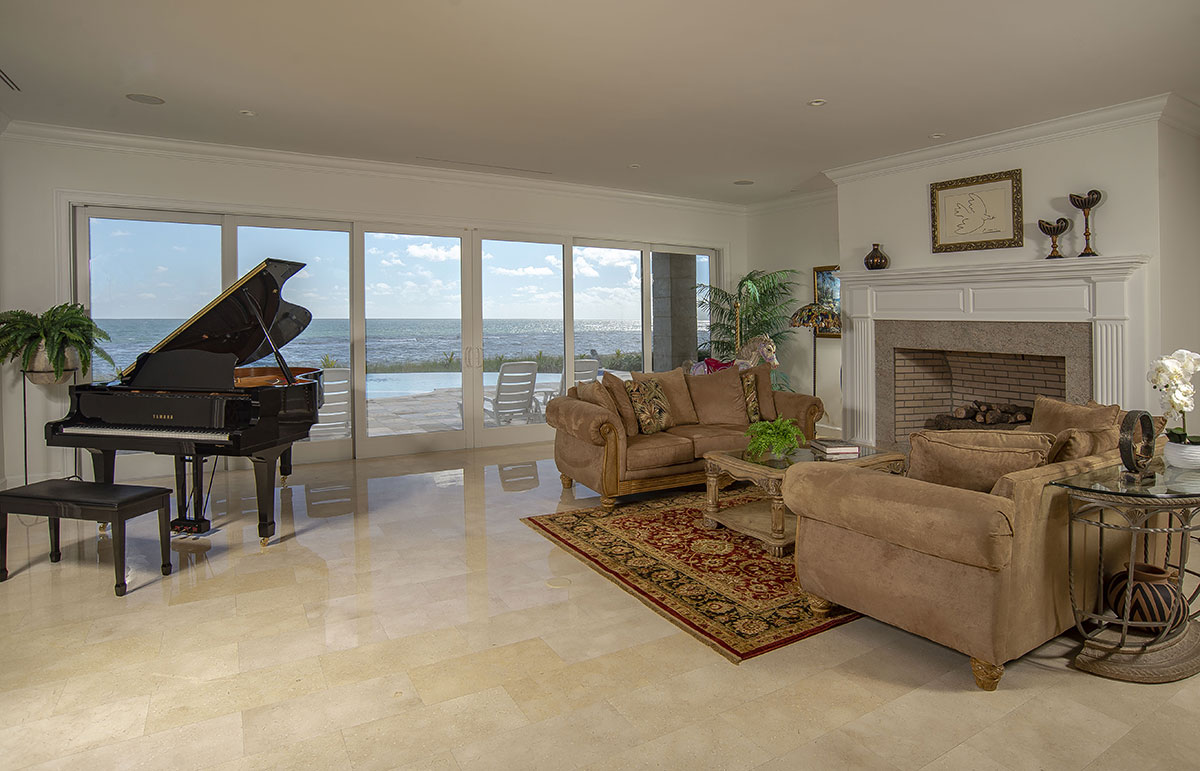 Charlie and Peggy Russell can’t resist buying large homes and then completing extensive renovations, but their third home in Sailfish Point will be their last.

Originally from Kentucky, the couple has bought, remodeled and sold a dozen homes and condominiums in Palm Beach and Martin counties. Their oceanfront residence in Stuart was the biggest challenge yet, since it was just an unfinished shell when they purchased it three years ago.

“We buy them and fix them up with the idea of selling them,” says Charlie, who went from cleaning asphalt tanks for $1.99 an hour to working as an executive for Ashland Oil. He also founded Kentucky Farmers Bank. “When it comes to the money, we win a few and we lose a few,” he says.

Built in 2008, the six-bedroom, 12,539-square-foot home was a foreclosure from the bank. The $1 million finishing work included new paint inside and out with new flooring in one bedroom. Bathrooms needed lights, mirrors and door knobs. New light fixtures now have LED bulbs throughout.

“This house was built on pilings to withstand a tsunami while the wave goes right underneath the home,” says Charlie. “We were the first people to live in this place.”

When the couple begins a home project, they are all in every day, bringing lunch with them while they supervise and actually work, such as repairing drywall. Peggy did the lower work and he did the higher work on the ladder.

“Charlie and I are together when we choose a house,” says Peggy, an accomplished pianist and painter in all mediums. “I’m just organized. When we buy a place, it is like a business and we get up in the morning and hit the floor running. We are hands-on people, but we just can’t do it anymore. And we don’t touch electric or plumbing. But I am all eyes and I can see if it is not the best work. You want the very best people. We have redone everything in this house.” Helping them through the process was a crew of six carpenters and “the best painter ever,” she adds. 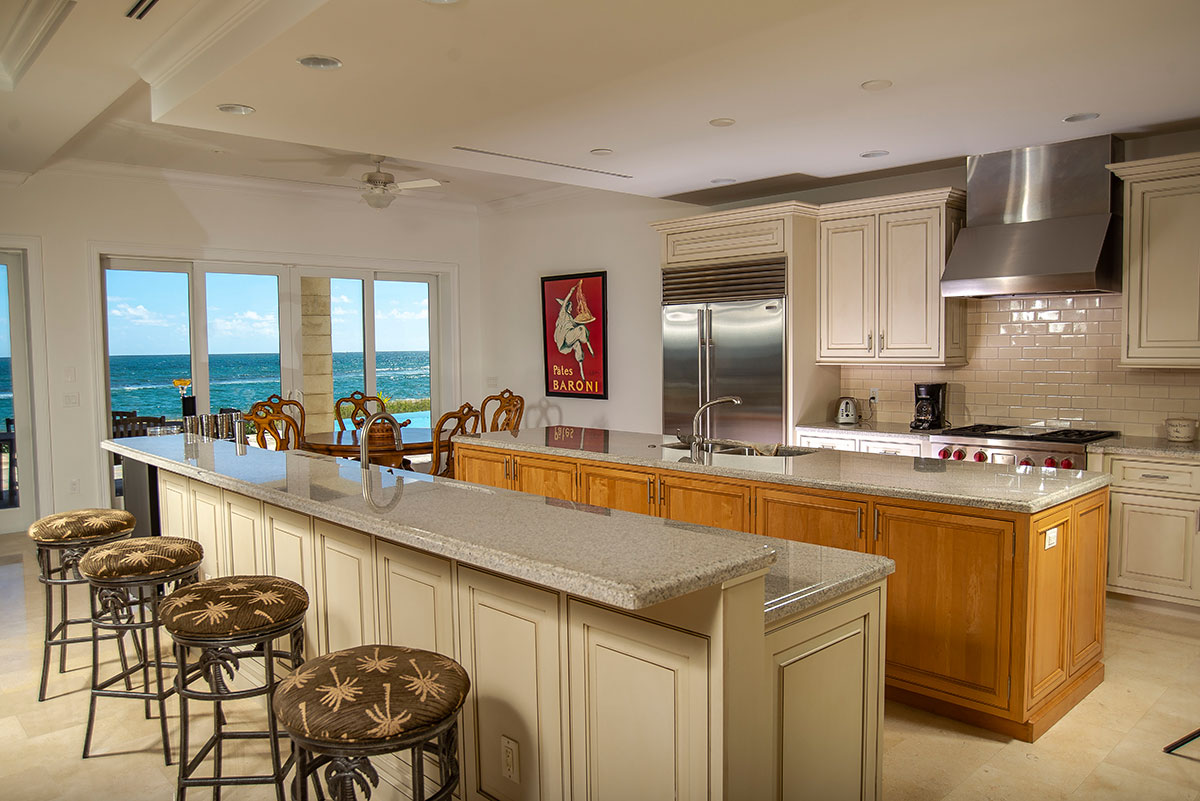 The airy kitchen with its white walls captures the outside light. The island provides ample room to prepare a large meal and the freestanding breakfast bar seats four as well as providing extra work space.

PAINTINGS GRACE HOME
Peggy also took care of the design, choosing colors and switch plates while dealing with the different vendors. Her paintings can be found throughout the home. None of the cabinets in the large kitchen had knobs or handles. Charlie calls them “pulls,” and he is proud of the smooth action of the drawers, using magnets to slowly close at the end as if by magic.

The couple knew what they needed to do to fight off the corrosive salt air from the Atlantic. Soffits were sealed off to keep moisture out of the attic, and two dehumidifiers were installed. Windows were sealed and now do not open, which is irrelevant, as there are outside balconies in front of all but two rooms on the ocean side.

“You don’t want windows to open on the ocean,” Charlie says.

All six air compressors and handlers for the air conditioning had to be replaced. Two fans were removed from the wine room which has space for hundreds of bottles and both coolers were replaced. Every ceiling fan in the house was replaced.

The stunning vanishing edge pool was recoated with marcite and retiled. Gifts to the Russells, two gnome-sized lion statues in stone have guarded all three of their pools in Sailfish Point over the years. The pool was converted from fresh to salt water. There is plenty of covered and open patio space around the pool, including a summer kitchen. 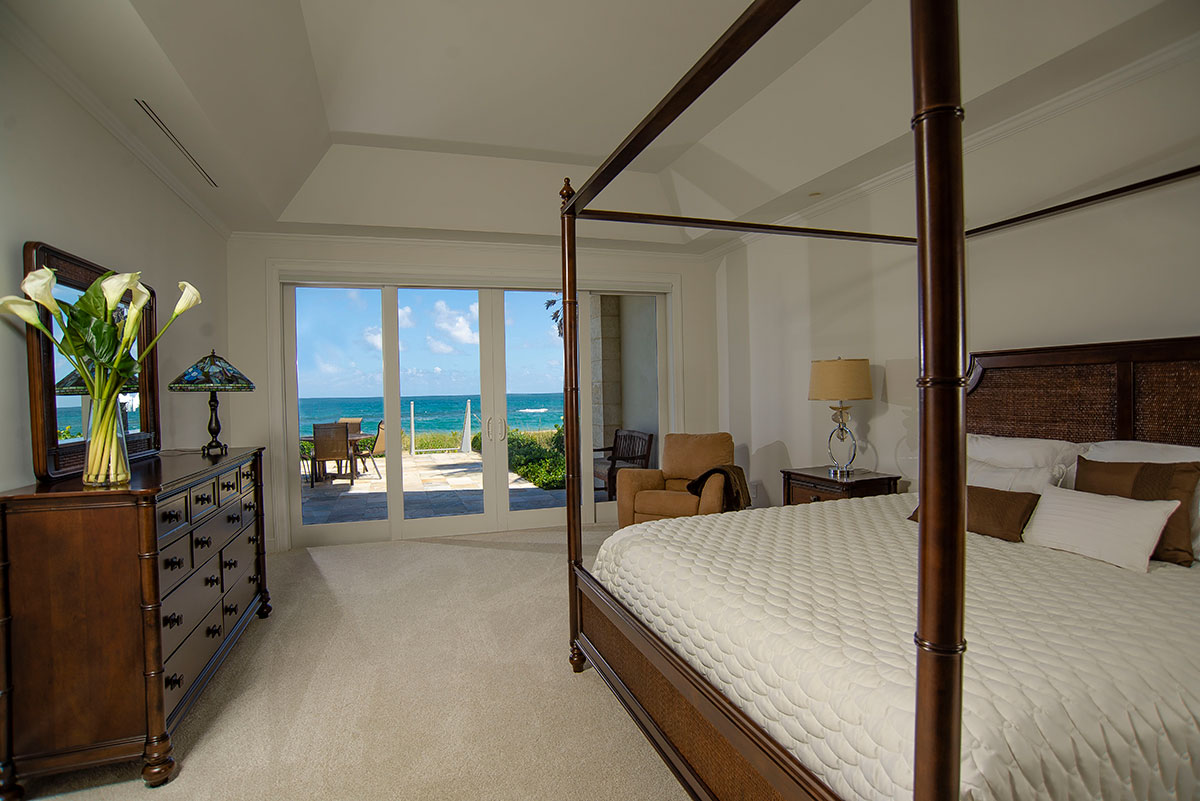 The only first-floor bedroom has its own bath suite and works well for guests who have trouble with stairs.

SEASIDE VIEW
The spacious foyer opens out to the living room with the piano and the Atlantic Ocean beyond. There are five bedrooms upstairs and one downstairs, each with sweeping views of the sea and the St. Lucie Inlet. Each bedroom has its own full bath, and there are two more full baths and two half-baths in the house.

“Bonus” rooms include the ping-pong room, which was originally planned to be a theater room, Charlie says. Today, it doubles as an art gallery with Peggy’s paintings hanging on the walls. There is also a pool room with space for two full-size tables. Another room serves as the couple’s offices and a studio for painting. An almost unnoticeable door leads to a room under the stairs on the first floor.

His-and-her garages on opposite sides of the house have room for two cars and a golf cart. The master bedroom has two large his-and-her closets, finished with detailed woodwork.

There is a laundry room on both floors with windows offering a beautiful view of the golf course to the west. The upstairs has a long hallway with wrought-iron railings and views of the stairs and foyer below. Both the upstairs sitting room and the living room have gas fireplaces.

With a large island and breakfast bar, the kitchen and adjacent family room are Peggy’s favorite rooms in the house, she says. On the other side of the house is the study with a second piano, which she loves to play, and views of the ocean. Nestled behind the oceanfront dining room is a pantry for quick service.

While the property has the capacity to comfortably host 200 people, the largest gathering they held was the wedding reception of 50 people for the couple’s oldest son. This Thanksgiving the Russells will host their four children and 11 grandchildren for the holiday. 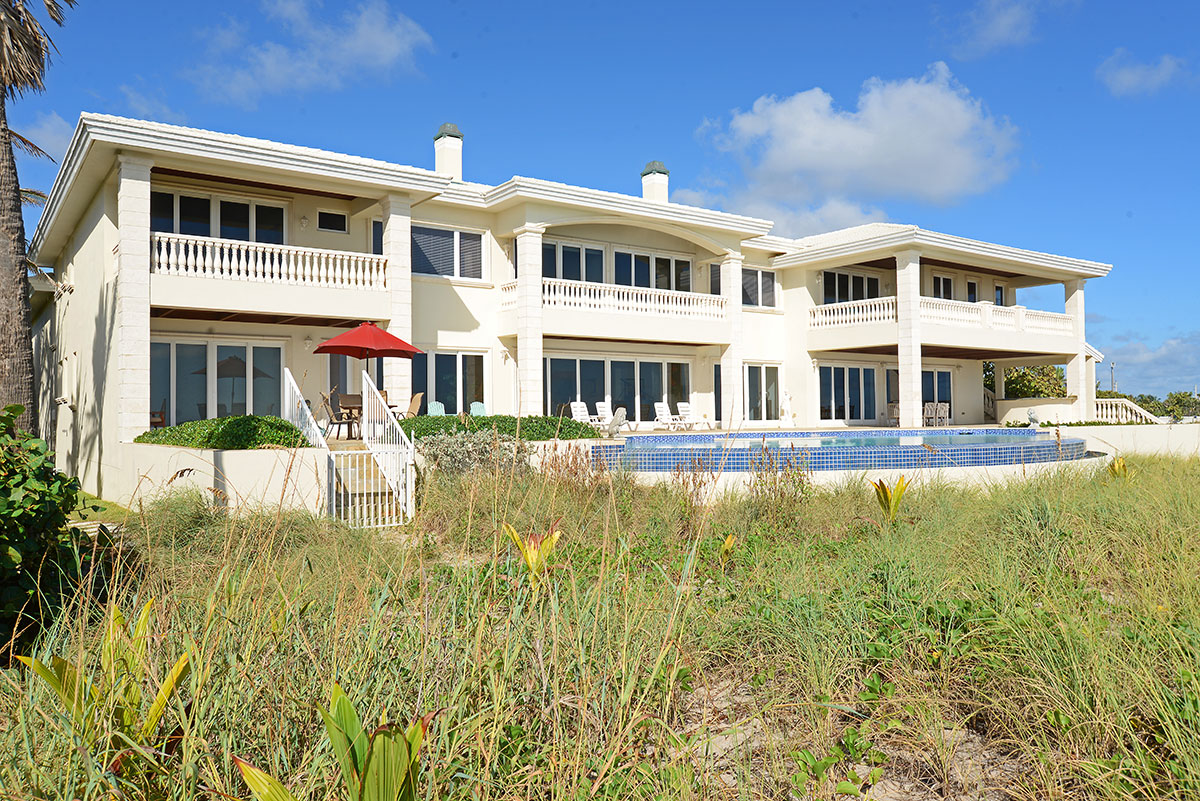 The 12-foot dune line was created by a now-buried sea wall to protect from storm surge, while the house was designed for the surge to pass through the pilings underneath the first floor.

“I love it when the kids visit here,” says Peggy. “They love laying on the beach and building sand castles. This is a wonderful place. I love waking up and watching the sun come up. We have coffee on the balcony. It never gets old and I am always in awe of it. I like everything about this house.”

“The house has always been for sale and we have liked it,” says Charlie. “We have gone hot and cold on selling it, but we really like this place. I have always been a hands-on guy and I don’t like to hire people to do things. I have high ceilings and I can’t really climb a ladder and change the light bulbs. It is more than what we need. We did what we wanted to do and fixed it up. I hope we find someone who’s younger and can really enjoy it.”

The Russells are planning to downsize and move to a Singer Island condominium. The home, 1755 SE Sailfish Point Blvd., is listed for sale by the ReMax Community Patrick Stracuzzi Team in Stuart for $6,999,888.